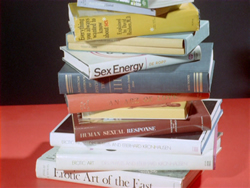 Before the advent of the adult feature film craze following Deep Throat, the transition from 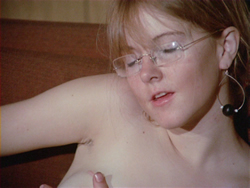 softcore to more explicit fare resulted in some pretty strange hybrids. Soft films would sometimes be shot with more graphic alternate and additional scenes, while full-on hardcore was initially brought to theaters as "white coaters," or educational guides. A good example of this transitional period at the start of the '70s can be found in their DVD entitled The Oral Generation, which takes its title from the main "feature" tucked away among a slew of additional tidbits.

The disc actually defaults to play everything in one randy sitting, kicking off with a vivacious trailer of The Oral Generation to give an idea of what's to come. Then "Extraordinary Films," a name you'll see a lot here, presents "Clinical Sex" in which a "doctor" has his shapely young nurse bring in a troubled wife named Alice, who's "deeply troubled because she didn't respond to her husband's lovemaking." You can pretty much figure out where things go from there. Then there's another patient named Betty, a girl with an undisclosed problem who shows up in a pea green sweater and turns out to be a lesbian thanks to that aforementioned nurse. Next the same fine releasing company contributes "Any Way You Like It," in which a sleazy guy with a goatee (another "doctor") uses a variety of instruments to help married women "release those tensions." Then the disc hits its insane speak with "Naked Sexes," an absolutely mind-melting, dialogue-free slice of softcore insanity with two topless women laughing maniacally and rolling around on a bed while three guys stand around flexing their muscles in g-strings, all accompanied by rinky dink piano music. And then there's "The Different Sex," in which the same doctor from "Clinical Sex" pops up again as a sex education subject for a college student named Sandra, who's doing 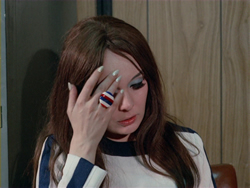 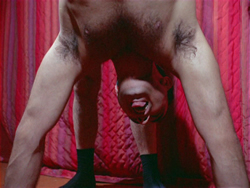 A fairly short hardcore outtake scene comes next, which then segues into our feature presentation. This 65-minute "educational" look at modern sexual customs is a self-proclaimed "Documentary Report on Today's Liberated Woman," opening with credits showing marquees bearing titles like The Bizarre Ones, Teenie Tulip, and Diamond Stud. From there a narrator walks us through the sexual scene of today (errr, 1970), in which the proliferation of adult entertainment has freed women to explore various avenues of pleasure. That mainly means using their mouths with their male companions in a variety of configurations, including the obligatory interracial scene with a blonde nymphet working her magic on a black tae kwon do master wielding a pair of swords! It all ends, as such things must, with a movie marquee for Dean Martin in The Ambushers. In keeping with their other adult titles, Vinegar Syndrome's transfer is absolutely stunning, taken from what appear to be immaculate negatives probably sitting in canisters for decades. It's quite perverse that this still exists in prime condition while hundreds of studio films are growing more endangered every day, but that's showbiz.

Released at the same time on DVD is a pairing of '70s adult films from Kemal Horulu, a familiar name from Vinegar Syndrome's soft/hard mash up The Sexualist. First comes Virgin and the Lover, which was previously issued in a really lousy looking combo pack release from Alpha Blue; the difference here is startling to say the least. Our story revolves around a guy named Paul (industry stalwart Eric Edwards) who's first seen gazing longingly at a mannequin in his apartment. He goes off to a doctor to discuss his problems with women, stemming from a combination of intimidation and tragedy involving

the only female he ever really loved. On the way out he decides to ask the receptionist, Julie (Marlon), for a date, though her coworker warns her she's "walking on eggshells" by going out with a potential fruitcake. Meanwhile Julie's boyfriend (John, sporting a particularly terrible haircut)

As with The Sexualist, much of this film was definitely filmed softcore, though a handful of explicit moments are wedged in to make it suitable for the raincoat crowd. Edwards goes back and forth between simulating and doing the real deed with his fellow performers, of course, and it's a kick to see so many New York regulars strutting their stuff yet again. Not to sound like a broken record, but again the image and sound quality here are leagues better than anything we've had before; no complaints here at all.

Sharing space on the same DVD is Lustful Feelings, also released simply as Feelings, which kicks things off with a lyrical arrangement of "Concierto per Aranjuez" on the soundtrack (yes, just like Lisa and the Devil) while Lesllie Bovee lets her fingers do the walking in front of a mirror. Here she plays Julie, the girlfriend of an ambitious but low rent dealer, Tony (Gillis), who's in debt to a crime boss (Kean). While Tony scrambles to raise money and occasionally pokes into whoever happens by, Julie ends up modeling for a woman named Claudette (Henderson) who soon has

her turning tricks for some

Again there's a wide array of Big Apple talent from the golden age turning up here for what is probably Horulu's most accomplished, well-acted film, at least among those that are readily available now. Gillis is in top form, of course, and there's also an enthusiastic turn by the always terrific Terri Hall. Bovee gets a ton of screen time in this one and holds her own nicely, while other familiar faces include Bobby Astyr, Helen Madigan again, and a brief appearance by a young Herschel Savage. As usual, Kean is better at acting than getting physical; he has one sex scene here and looks especially disinterested, making it the closest thing to a purely softcore set piece in the film. Other than that, everyone seems to be relishing their roles and having a blast with a more substantial, twisty tale than usual. Video and sound quality are on par with the first feature, not surprisingly. The only extras are theatrical trailers for both features, which are also in terrific condition. It's hard to believe how many vintage classics Vinegar Syndrome has already rescued from tenth generation video hell, and here's hoping they keep it up a lot longer.