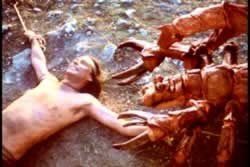 Way before Firefly and the megabudgeted Cowboys and Aliens, gunslingers and interstellar creatures collided under the auspices of the beloved '90s direct-to-video factory Full Moon Pictures. Shot for a bit more money than usual with a bizarre supporting cast you won't find anywhere else, this PG-13 romp is one seriously strange concoction filled with creature FX, giant stop-motion beasties, and bad Star Trek jokes with George "Sulu" Takei popping up as the bearded town drunk.

Basically a riff on countless oater storylines, our film begins "in 3031" with the death of 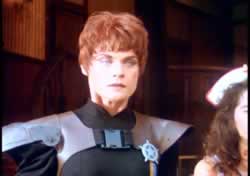 the town sheriff of Oblivion, who's gunned down by some no-good outlaws led by the lizard-like, eyepatched Redeye (Lost's Divoff) outside a bordello run by Miss Kitty (Newmar). At the funeral, Stone's estranged, peace-promotiong son, Zack (Paul), is pressed into restoring law to this godforsaken town with the aid of a cyborg deputy, Stell Barr (Foster). Along the way people get staked to the ground as offerings to monster scorpions, Redeye's sidekick (Vander) models some incredibly kinky leather gear, and a fanged, stop motion frog even makes an appearance. Full Moon was really nuts around this time, running wild with Puppet Master sequels and branching off with sublabels devoted to kiddie films, actioners, and even erotica (including Petticoat Planet, basically a T&A version of this film).

Oblivion is one of the cleaner films to bear the official Full Moon banner, and the sheer oddity of the cast (also including Isaac Hayes!) makes for compelling viewing even if the final result feels like five different movies smushes into one. The script (derived by five writers from a story by Full Moon founder Charles Band) manages to pack in most of the expected western tropes with monster-friendly twists, and while Paul can't do much with his stiff character, it's bizarre seeing Foster (a once up-and-coming star from movies like The Emerald Forest) in the middle of her post-They Live exploitation career. This also marked the second and final Full Moon film for composer Pino Donaggio (after Meridian), and not surprisingly, it's similar in tone to the two films he scored around it, the Terence Hill comedy Troublemakers and Dario Argento's Trauma. 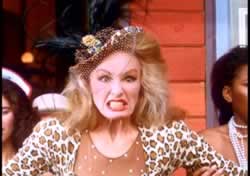 Full Moon's "first ever release on DVD" of Oblivion in 2010 appears to be a direct port of the original full frame (open matte) transfer from which the old VHS version was sourced and looks fine for what it is (i.e., pretty dated and interlaced but watchable enough). Confusingly, this also appeared very briefly in 2002 as a release from Artisan (before they got sucked into Lionsgate) which appeared to be the result of some odd legal snafu, as Full Moon properties were either controlled by the company itself or Paramount. In any case, Full Moon trumpets their disc as the only sanctioned one on the market, which also casts some doubts about the Region 2 Dutch disc taken from the same source (but with cruddy NTSC-to-PAL issues). The original "Ultra Stereo" soundtrack is basically a typical matrixed surround track mainly focusing on the score and some zippy sound effects. For some reason the original Videozone making-of featurette from the Full Moon VHS has been ditched for the DVD, but you do get a huge amount of trailers including this film and its sequel (Backlash: Oblivion 2), Puppetmaster: Axis of Evil, Dollman, Demonic Toys, Meridian, Laserblast, Arcade, Netherworld, Seed People, Shadowzone, Subspecies, Bad Channels, and Crash and Burn.