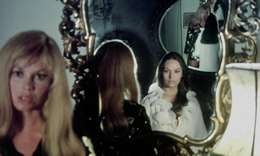 Few other films in the career of director Jess Franco are as mysterious or promoted as dishonestly as Nightmares Come at Night, the literal translation of its more lyrical French title, Les cauchemars naissent la nuit. Initially 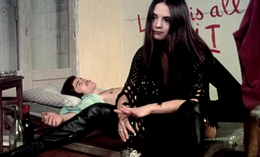 shot as sort of a dreamy psychosexual thriller, the film was tricked out with additional scenes to bring it up to feature length and expand on its crime heist subplot, resulting in a peculiar suspense film more concerned with hazy atmosphere, angst, and plentiful nudity than anything resembling a traditional shocker. Of course, for Franco fans that's just par for the course.

Our story, such as it is, commences with sexy burlesque performer Anna (The Awful Dr. Orlof's Lorys) suffering from nightmares in which she commits murders and finds her hands splashed with blood. For reassurance she turns to fellow dancer Cynthia (Jack) who becomes her roommate, naturally leading to some lesbian experimentation. Also on hand is Dr. Lucas (Muller), whose concern might be masking other motives, and adding to the suspicious air are a couple of thieving, money-obsessed, and clothing-averse neighbors, played in glorified cameos by Franco regular Soledad Miranda and Andre Montchall, both of whom would go on to appear in Eugenie De Sade. Anna is also troubled by the recurring appearance of strange man in her dreams, played by Female Vampire's Jack Taylor, who might have his own part to play as the trauma begins to spill over into reality.

When Franco made this film he was coming off of a productive but artistically constraining tenure with producer Harry Allan Towers, which had resulted in everything from a pair of Fu Manchu films to hits like 99 Women and Venus in Furs. This particular film is about as far from commercial as Franco could get at the time, using the barest strands of a plot to weave together his trademark sexy club performances, hypnotic fantasy sequences (here using grainy, distressed film stock to enhance the effect), and bold Bruno Nicolai music into a whole that will no probably confound newcomers but delight those familiar with the director's stranger cinematic detours.

The biggest real surprise with this film was the fact that it actually turned out to be great showcase for Lorys, a busy actress in numerous Euro westerns. She really cuts loose here in every way, delivering a revealing performance in 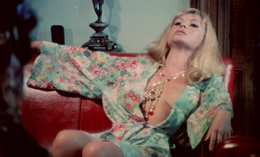 both the emotional and physical senses that could have altered her career significantly had anyone actually seen this when it was made. It's unlikely anyone would ever rank this among Franco's most accomplished work, but for a quick cinematic palette cleanser, it's certainly a worthwhile diversion with its own quirky set of pleasures.

Both this and another Franco film featuring Lorys and Miranda, Sex Charade, remained essentially undistributed, with this one getting a brief run in Belgium before disappearing for decades, presumed lost. However, a 35mm copy survived in France and debuted on DVD in 2004 from Media Blasters (under the Shriek Show banner), complete with cover art prominently featuring Soledad Miranda and flapping bats. Well, Miranda's only in the film for a few brief 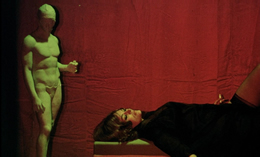 minutes (albeit in an eye-catching outfit that leaves little to the imagination), and there are no bats to be found anywhere; nevertheless, it proved to be a fascinating little connective film in the Franco filmography, smoothing out the transition from the Towers era to the real Soledad vehicles like Vampyros Lesbos and She Killed in Ecstasy. Later in 2004, a DVD version appeared in the UK with the absurd claim that it was "a vampire film by Jess Franco," and in 2008, the same essential disc was ported over to another UK disc for a Shriek Collection release bearing the vivid tagline, "Slashing stripper kills in her sleep!" Hey, whatever sells copies.

In any case, the Media Blasters disc was presented in a full frame (1.33:1) transfer with a lot of extraneous room on the top and bottom for much of the film, though not all of it (for reasons explained later). A new English was commissioned to accompany the original (and far superior) French language version with English subtitles, and the sole notable extra was a 21-minute video interview with Franco talking generally about his career and not really about this title in particular.

The Redemption Films revisit with Kino Lorber in 2013 resulted in a Blu-ray edition (along with a DVD reissue) whose most obvious difference lies in the framing, which is now 1.66:1. As it turns out, the Miranda scenes (most likely shot later) were hard matted at 1.66:1, as was the possibly reshot finale of the main story, while the rest was open matte. To keep things compositionally consistent, the whole film was matted to 1.66:1, and the results look very good. It's a much sharper and more vivid presentation than before, with the SD predecessors now looking very soft 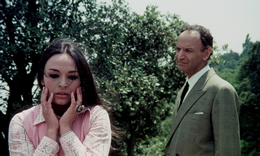 and dull after watching the HD edition. It's also cleaner than expected, apart from that little hair thing on the left side that was printed into the actual surviving element (and which was present in the earlier transfer, too). Presumably because of PAL conversion issues with the previous release, the Blu-ray runs almost two minutes longer but seems to be identical in content. Both the French and English tracks are present, with optional subs, in LPCM mono. As with the releases of Orlof and A Virgin Among the Living Dead, an audio commentary is provided by Video Watchdog's Tim Lucas in which he puts the film in context in Franco's busy schedule and perceptively points out some nuances in the performances that could easily go unnoticed, particularly Muller's. He also draws a tantalizing link between Miranda's appearance here and the persona adopted by her successor as Franco's sensual idol, Lina Romay, whose Countess Irina might have gotten the idea here for her iconic black boots.

The biggest video extra is a 20-minute Daniel Gouyette featurette containing some archival interview footage with Franco along with new contributions from Daniel Lesoeur and film historians Alain Petit, Lucas Balbo, and Jean-Pierre Bouyxou , explaining how the film came to be financed and how it was made back to back with the elusive Sex Charade (which actually receives the lion's share of the discussion here). Gouyette's 8-minute "Jess! What Are You Doing Now?" also appears here, as seen on the other two simultaneous Redemption Franco releases, and the 5-minute "About the Master" refers not to the director but the actual video master itself, showing how the framing decision was made and demonstration how some of the more egregious damage was cleaned up for this release. Obviously there was never a theatrical trailer for this film, but you do get the usual batch of other Franco trailers: The Awful Dr. Orlof, A Virgin among the Living Dead, Female Vampire, Exorcism, and Oasis of the Zombies.