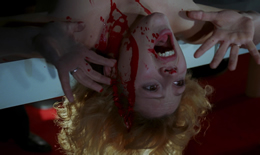 While driving along a desolate road at night, a young man, Robert (Gardère), is startled to see a disoriented y 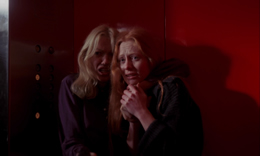 oung woman, Elisabeth (Lahaie), running through the woods while another (Journet), nude and bordering on catatonia, watches in despair. Lahaie collapses in front of the car and, apparently suffering from a strange form of amnesia, is taken to his home where they make love. Unfortunately their momentary bliss is shattered when Elisabeth -- who can seemingly retain memories for only a short period of time -- is spirited away by doctors to an austere, postmodern facility referred to as "the black tower" (actually a block of office buildings in which Rollin shot after hours). Journet is also captured and returned, with the two women trying to form a new plan of escape even though they can't remember. Bizarre events ensue: a nude woman punctures her eyes with scissors, the guards prey on the female inmates, and catatonic shells of human patients are disposed of in an incinerator. Can Elisabeth be rescued before she becomes another victim, and what's the chilling ecological reason behind her condition?

By this point, director Jean Rollin had strayed very far from his luscious yet melancholy vampires, favoring instead the more realistic bloodletting of Fascination and the mournful zombies of The Grapes of Death. This vaguely futuristic thriller seems a bit out of step at first glance, but many of the trademark Rollin elements are still here: poignant and doomed romanticism, vibrant comic book colors, casual and strangely innocent nude scenes, and startling, graphic violence. Without his more traditional lonely beaches or crumbling castles, Rollin makes expert use of the stark office complex to mirror the characters' emptiness with its vast windows opening up on chilly expanses of night and unexpected bu 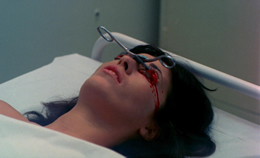 rsts of red neon appearing around corridors. The film moves very deliberately, a Rollin trademark, and retains a dark fairy tale quality despite the sci-fi trappings. 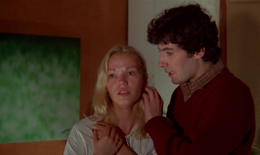 While the acting is mostly touch and go, not surprising considering the largely amateur cast and rushed production schedule, Lahaie does quite a fine job as the tragic heroine (her reaction to the aftermath of the scissors scene is especially effective), and the central romance leads to an outstanding payoff during the haunting finale, set in a deserted train station and culminating in a wonderful final shot. A difficult, somewhat challenging film, Night of the Hunted is well worth checking out.

This film was long regarded as a lesser work (even by the director himself) and failed at the box office in Europe, though its reputation got a boost when it was surprisingly chosen as the first of his films to receive an American DVD release from Image Entertainment as part of their Redemption Films line way back in 1999. The non-anamorphic transfer was good for its time, easily besting the bad bootleg copies fans had to settle for in the past, and the optional English subtitles are generally accurate. The DVD also includes the original, perplexing French trailer (which mostly contains shots of people wielding guns and walking down hallways). Subsequent reissues from Redemption in the UK and the US didn't add much, but a more lavish Dutch release from Encore featured a sparse but useful Rollin/Lahaie commentary track, a trio of video interviews (Lahaie, actor Alain Plumey aka adult actor Cyril Val, and Lionel Wallman), stills, and some additional scenes (more on those below).

While all of Rollin's films have benefited tremendously from their boost to HD courtesy of the Kino Lorber and Redemption releases (with DVD reissues to match), Night of the Hunted gets a particular extra jolt as its icy compositions and voluptuous color schemes come through far more vividly than before. The previous transfers almost look harsh and sickly in comparison, and while the negative doesn't look as pristine as some of the others (you'll see some debris and water damage popping up here and there), it's great 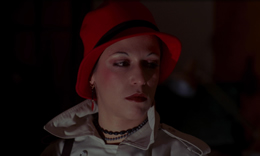 to have this underrated film in a form that finally does it justice. The LPCM mono audio sounds good as well, with that spare but effective Tangerine Dream-style electronic score faring best.

On the extras side you get a brief (84-second) 1998 video intro by Rollin, who talks about making this with a porn budget (i.e., really tiny) and industry actors, and a fragment of a Fantasia interview with Rollin by Joshua T. Gravel (two and a half minutes) covering the quick writing process and creating the film's atmosphere in industrial areas of Paris during the ten-day shoot. It also features a few fleeting glimpses of Filles traquées, a hardcore reissue version prepared by the producer without Rollin's involvement. On the other hand, the two deleted sex scenes on the disc presented in their entirety were shot by Rollin; they're strictly softcore (and very, very badly simulated), with minor characters in the black tower getting it on for several minutes. Also included are the original trailer and bonus Rollin trailers for Fascination, The Grapes of Death, The Living Dead Girl, Zombie Lake, and Two Orphan Vampires, while Video Watchdog's Tim Lucas presents liner notes written for both this release and Grapes in which he discusses the casting tragedy that overshadowed the film, draws parallels between the two films made during the height of Rollin's dual careers in horror and smut, and points out both films' debts to David Cronenberg, which is definitely more pronounced in this case. Actually, you could run this back to back with Rabid and have one heck of a double feature.