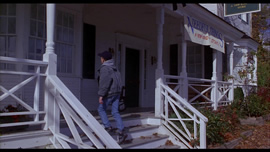 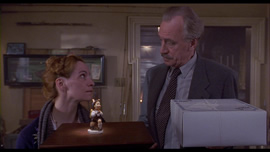 This adaptation of Stephen King's apocalyptic 1991 novel, the final entry (sort of) in his string of books set in the fictitious town of Castle Rock, Maine, arrived at the height of Hollywood's mainstream acceptance of his work. Co-founded by Rob Reiner, Castle Rock Entertainment (the company behind this film) had already gotten a foothold in the American consciousness with Seinfeld and would use this as a springboard for other King adaptations like The Shawshank Redemption, The Green Mile, and Dolores Claiborne, while George Romero's The Dark Half opened the same year and even featured the same recurring character as this film's hero, Sheriff Alan Pangborn (played here by Ed Harris). However, the decision to market this as a horror film (complete with poster art showing a screaming face in a shopping bag) backfired with audiences and critics, who reacted with bewilderment to what is actually a dark moral fantasy with a streak of jet-black humor.

The story of Needful Things manages to pay homage to Ray Bradbury's Something Wicked This Way Comes (and even Friday the 13th: The Series if you want to stretch it) while fitting the template of King's subgenre of stories about towns radically transformed by an invasive supernatural force (a la 'Salem's Lot and The Tommyknockers). Here the interloper is Leland Gaunt (an incredibly effective Von Sydow), a mysterious stranger from Akron, Ohio who sets up a shop called Needful Things that caters to the customer's fondest desire. His first sale is an autographed Mickey Mantle card to a young boy who offers him 95 cents and one favor, a trick to be 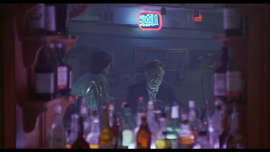 pulled on one of his neighbors at a later date. Soon Gaunt is exerting a manipulative and eventually deadly influence on the town, focusing in particular on the vulnerable and 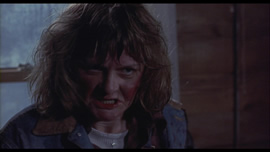 eccentric Nettie Cobb (Plummer) and rich, entitled jerk Danforth Keeton III (Walsh), who hates it when you call him Buster. However, Pangborn really has to step in and come to grips with the uncanny threat when Gaunt sets his sights on the sheriff's fiancee, Polly (Bedelia, who played a similar part in the Salem's Lot miniseries), and ratchets the tension among the townspeople up to an explosive level.

Originally assigned to director Peter Yates, this film wound up being assigned to first-time feature director Fraser C. Heston, son of Charlton and a second unit director on Castle Rock's City Slickers. He does a solid job of juggling the numerous story strands and weaving in and out of the tonal shifts between sinister irony and oddball humor, particularly a memorable apple-hurling incident that turns out to be the catalyst for multiple violent deaths. It's not the kind of film some people can wander blindly into and enjoy without some context of King's universe, but fans have come to embrace the film over the years thanks to its rich performances and slick technical credits, including a terrific, bombastic score by Patrick Doyle in full Dead Again mode here.

Of course, anyone familiar with the book quickly noted that numerous elements and characters had to be streamlined considerably to fit into a two-hour feature film. The submitted screenplay actually had an approved length of 140 pages, which meant Heston's first cut came in just over 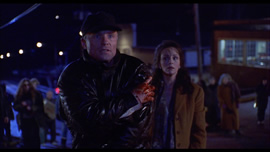 20 minutes longer and had to be trimmed down for theatrical release. The longer version (with some violence censored) turned up with little fanfare as a four-hour presentation on TNT, complete with an entire Elvis-related subplot involving Lisa Blount (who is only glimpsed briefly during the climax in the theatrical version). Unfortunately that alternate cut is far more difficult to see since it rarely airs and remains the legal property of Turner, while the Castle Rock titles have bounced around through other video distributors including Columbia and MGM. The latter has handled the film through the DVD era including an okay U.S. disc 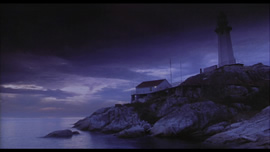 Obviously it was only a matter of time before this film hit Blu-ray, but the first one out of the gate in Germany turned out to be a complete disaster with an incompetent upconversion job that turned the film into a compressed, noise-riddled, unwatchable mess. Far more preferable is the 2015 Kino Lorber Blu-ray, which ably captures the film's unusual theatrical appearance (sort of a somber, twilight color scheme with many hazy, stylized scenes) while offering detail a few notches crisper than what was seen in the theatrical prints. It isn't perfect due to some occasional compression issues in the darker, mistier scenes, but as far as a replication of '90s film stock goes, it's the best option we've gotten to date. The DTS-HD audio also offers a nice, accurate presentation of the film's Dolby Stereo mix. Since that aforementioned TV cut is still out of legal reach it couldn't be included here, but extras do include the theatrical trailer and, more significantly, an audio commentary with Heston moderated by Walt Olsen digging into the process of how he was hired and got all of his first-choice casting picks, working with dog lover Plummer to get an improvised reaction during one shocking scene, and becoming close to Walsh and Harris despite the former's tendency to be very method with his boorish portrayal when the cameras weren't rolling.