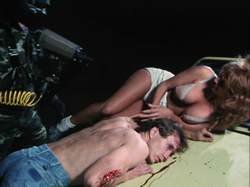 Boldly steering the '80s slasher film back to the territory from whence it came (namely, the gore-soaked unintentional 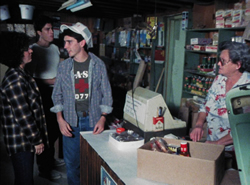 hilarity of H.G. Lewis' Blood Feast), this vicious, nudity-packed Texas cheapie takes the "have sex and die" philosophy to ludicrous extremes. The plot (what little there is of it) concerns the aftermath of a gang rape at a construction site, with the participants hunted down and poked full of holes thanks to a helmet-wearing assailant toting a high-powered nail gun. Soon the killer decides to expand his list of victims to other townspeople as well, leading the sheriff and a local doctor to embark on an investigation into these hideous crimes.

Thanks to its impoverished budget and mushy, improv-heavy dialogue, this film is junky enough to make the original Toolbox Murders look genteel by comparison. The mystery killer offers much of the entertainment value, from his awkward weapon get-up to his pimp-style hearse and his relentless barrage of hokey one-liners. The scare value is nil, but when you're distracted by a kitschy pop song called "Foosball" and a camera that seems to reflexively hone in on every bit of bare flesh in sight, who's complaining? Many of the film's comedic highlights have since become the stuff of trash fan legend, from the riotous swimming pool attack to a head-spinning grocery store yakfest (including an immortal line about mosquitoes) that must be heard to be disbelieved.

Released just as the commercial appetite for slasher films was waning (unless they featured Freddy Krueger), Nail Gun Massacre went straight to VHS from the beloved Magnum Entertainment complete with the fantastic tagline, "It's cheaper than a chainsaw!" The first DVD was a homegrown affair with a rehashed, VHS-era transfer as a limited edition by co-director Terry Lofton, but the real home video breakthrough came in 2005 when Nail Gun 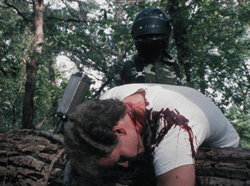 Massacre emerged as a nice 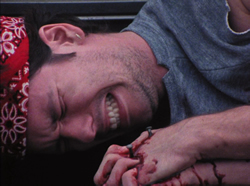 mass market upgrade from Synapse. Most obviously, the fresh anamorphic transfer vastly exceeded what anyone expected given its financially challenged origins and touch-and-go lighting. On the other hand, the mono audio was only as intelligible as the original sound mix which often leaves a bit to be desired. Fortunately Lofton remained on hand to put the whole thing in context thanks to "Nailed," a 24-minute featurette in which he candidly discusses everything from butchery performed on the original script to the real-life romantic fallout from the film's most graphic sex scene. God only knows what his co-director's doing now, but it's great to hear real life stories like these straight from the trenches. Other extras include 8 minutes of various outtakes (with additional Lofton commentary about the film's creation) and an incredibly violent promotional trailer that packs in almost every nail gun hit from the entire film.

Almost a decade later, the time was right for what the world really needed: Nail Gun Massacre on Blu-ray. America can certainly live without La Dolce Vita or the works of Val Lewton in HD, but there's no way any home video collector can sleep at night without knowing that every single beloved speck of grain from this film has been preserved in 1080p. Well, here it is, and it's everything you could possibly want. Unlike the DVD, this edition presents the film both in the familiar 1.78:1 matted version and a completely open aperture full frame one; given the film's 16mm origins and the nature of the compositions, the latter is definitely the way to go unless you absolutely want to fill up every inch of your giant TV. The transfer is about on par with most '80s 16mm horror productions, meaning it looks like film, it's colorful, it's sharp, and it still looks really, really cheap. The DTS-HD mono audio also seems like an extravagance since this will always sound like it was captured on a portable cassette recorder. The bit rate is fairly low for both versions, but it doesn't seem to have a particularly adverse effect on either option. 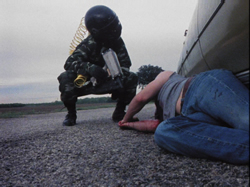 Not surprisingly, the previous two significant extras have been discarded in 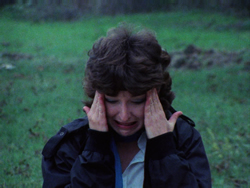 favor of new bonus material starting with a three-minute tour of the film's locations by Lofton, who still seems plenty amused by the film's longevity and ramshackle production history. Next up is an amusing 12-minute interview with Whitey Thomas, who provided the film's... shall we say, unorthodox sound effects (and has a cameo, too). He goes into detail about the film's utter lack of funds and the moment that made him react "Is he serious?" when seeing the movie for the first time, among other highlights; keep an eye out for the happy black dog scampering around in the background, too. Then Joe Bob Briggs appears to host a cast and crew Q&A at a 2006 Texas Frightmare Weekend screening, and while the a/v quality is a long way from decent, it's a nice little bonus to have. Then Lofton gets center stage for a 16-minute interview (in HD) in which he covers some of the same territory as the old featurette while adding a few new tidbits, too (including the familiar but hilarious story about casting the cashier at the general store). Finally there's an 8-minute video piece (again HD) covering the film's Alamo Drafthouse screening in Austin, complete with enthusiastic fans in line talking about the film and highlights from the cast reunion after the screening. It's hard to imagine more entertainment value for '80s regional slasher fans crammed onto one disc.