Though still fairly unknown in the United States, singer/songwriter Mylene Farmer has earned a name for herself as one of France's finest pop musicians. Her albums since the mid-'80s have built up a solid fanbase and led to a series of successful concerts, but perhaps her most enduring achievement is her body of music videos. These are not simply music promotional clips; instead, each song becomes the centerpiece of a lavish mini-movie, produced with immaculate care on a healthy budget and packed with violence, nudity, and stunning visuals.

All of Mylene's videos have been collected onto two DVDs, appropriately titled Music Videos and Music Videos II & III. The first disc focuses on her films directed by Laurent Boutonnat, her longtime partner, producer, and co-writer. First up is "Plus Grandir," in which a young Mylene languishes in a lonely gothic castle before a brutal rape attempt by an intruder produces tragic consequences. In "Libertine," still arguably her most famous video, she's a free-spirited 18th century woman who kills a man in a duel, engages in a catfight with the deceased's lover, and enjoys a passionate candlelit affair before the unexpected, bloody climax. "Pourvu Qu'Elles Soient Douces" picks up exactly where "Libertine" left off, as Mylene becomes entangled in the middle of a spectacular, violent battle between the French and English armies. "Tristana" offers a macabre Russian twist on the familiar tale of

Snow White, in which our peach skinned heroine becomes the target of a malicious witch and seeks the aid of seven very small men. "Sans Contrefacon" plays with another children's story, Pinocchio, as a wooden doll of Mylene becomes all too real. After the plotless, beautifully shot black and white mood piece of "Ainsi Soit Je," Mylene acts out a gruesome mano a mano bullfighting match for one of her best songs, "Sans Logique." The characters we've met so far appear together for a kind of curtain call in "A Quoi Je Sers," followed by the visually astounding Dickensian epic of "Desenchantee," which finds Mylene as an orphan

who leads an impoverished children's refuge in battle against their elders. Narrative takes a break from the moody duet of "Regrets" and the choreographed boxing of "Je T'Aime Melancholy," leaving the finale for "Beyond My Control," which mixes witch burning, gory werewolf sex, and dialogue samples of John Malkovich from Dangerous Liaisons into one heady brew.

All of the videos are presented in anamorphic widescreen, a very welcome gesture considering the majority were filmed in scope and even exhibited in French theaters. The PCM audio sounds terrific and less pinched than a Dolby Digital transition might rendered it, and the quality overall outclasses the previous commercial VHS releases. (Incidentally, bootleg videotapes with computerized English subtitles have been available on the video gray market; collectors may want to hang on to these for the lyric translations, but these discs are infinitely more watchable.) Disc extras include Mylene's first "video," "Maman a Tort," a quick paste job which was left out of the regular line up for obvious reasons, as well as the live video versions of "Allan" and "Plus Grandir" (partially lifted from her Live in Concert video). Two documentaries are also included: the making of "Pourvu Qu'Elles Soient Douces" (23 mins.) and the making of "Desenchantee" (14 mins.), both of which offer extensive behind-the-scenes footage illustrating the massive effort devoted to each of these films. 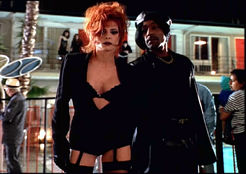 With disc two we move to a new batch of directors, starting with none other than Luc Besson for "Que Mon Coeur Lache," whose (loose) English translation was used as both the title and theme song for the Japanese horror film, My Soul Is Slashed. Here Mylene plays an angel sent by a bureaucratic God to discover the true nature of love on Earth. Among the bizarre sights she encounters is a Michael Jackson imitator being crushed by a huge cross; clearly not to be missed. Then the videos move to her two most recent albums with "XXL," a mind-boggling piece which finds Mylene lashed to the front of a speeding locomotive (for real), and "L'Instant X," which can only be described as a moodier version of Larry Cohen's The Stuff.

Abel Ferrara in his King of New York mode directed "California," in which high society woman Mylene spots her exact double, a hooker, while driving through the mean streets of Los Angeles (with Giancarlo Esposito, to boot). Filled with saturated colors and erotic visuals, this makes one wonder what she and Ferrara could have accomplished with another collaboration. The creepy "Comme J'ai Mal" depicts Mylene's bizarre woodland transformation into a winged, clawed insect creature, followed by the arguable high point of the disc, "L'Ame-Stram-Gram." This beautiful homage to Hong Kong cinema was helmed by Ching Siu Tung, who also directed the three Chinese Ghost Story films, Swordsman II, Witch from Nepal, The Heroic Trio, and many others. Shot in Hong Kong with the best technicians around, this is a dazzling crash course in pre-Crouching Tiger Asian fantasy as Mylene plays identical twin sisters with supernatural powers (including super strong monster tongues) separated by an invading Mongol horde, only to be reunited for a battle royale against their enemies. "Je Te Rends Ton Amour," sort of a supernatural horror/religious piece, climaxes with the memorable image of Mylene crawling naked across a church floor drenched in blood, while the equally dramatic "Souviens-Toi du Jour" posits her in the middle of a burning chateau. "Optimistique-Moi" takes Mylene to a Felliniesque circus as she does numerous balancing acts to get across the stage to her boyfriend, distracted all the way by knife throwers, tigers, and naked female stagehands. The dullest video of the bunch (but one of the best songs), "Innamoramento," closes with some pastoral footage intercut with Mylene's most recent concert performance.

Since most of the videos are full frame, disc two is presented in standard 4x3 but looks very good all the same. The extra clips this time are less interesting, comprised of three excerpts from her Live at Bercy concert (also on DVD): "Ainsi Soit Je," "La Poupee Qui Fait Non," and "Rever." The real treat here is two behind-the-scenes documentaries for "California" (27 mins.) and "L'Am-Stram-Gram" (18 mins.), detailing Mylene's working relationship with these two very different directors. The package is rounded out with "M.F. COnfidential," an 11 minute featurette detailing Mylene's experience in Los Angeles while recording her album Anamorphosee. In short, even if you can't speak French or aren't a pop music fan, these discs offer a wealth of unforgettable visuals far beyond anything you'll ever see on MTV. Fortunately the music happens to be terrific as well, and even if you can't understand what she's saying, chances are you'll be a Mylene fanatic long before the final video ends.

(Note: Universal has also released Mylene's Mylenium Tour on DVD as well in a nice 16x9 transfer with a 5.1 Dolby Digital mix, coupled with numerous documentaries and other extra goodies. Highly recommended.)