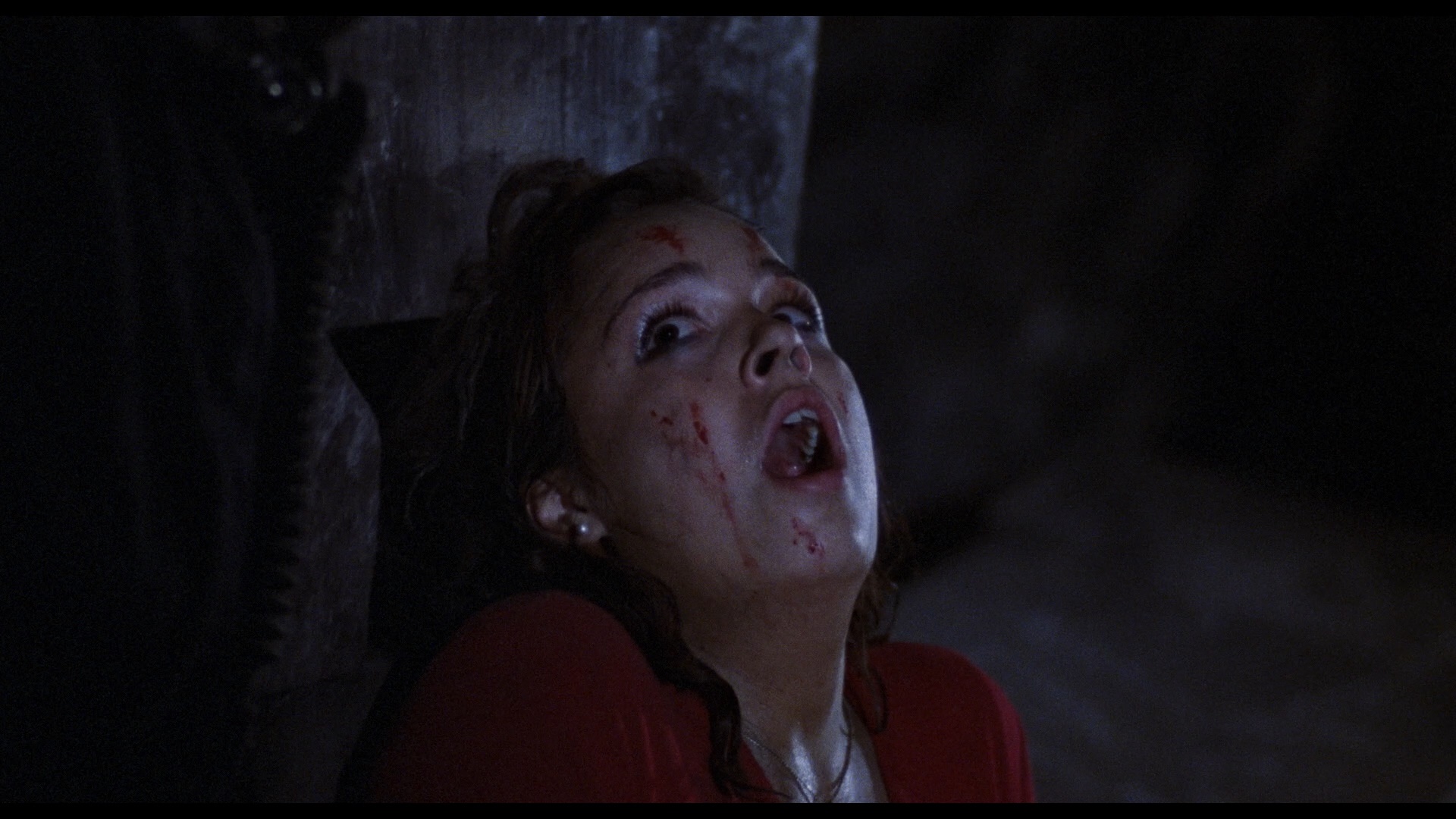 one of the greatest 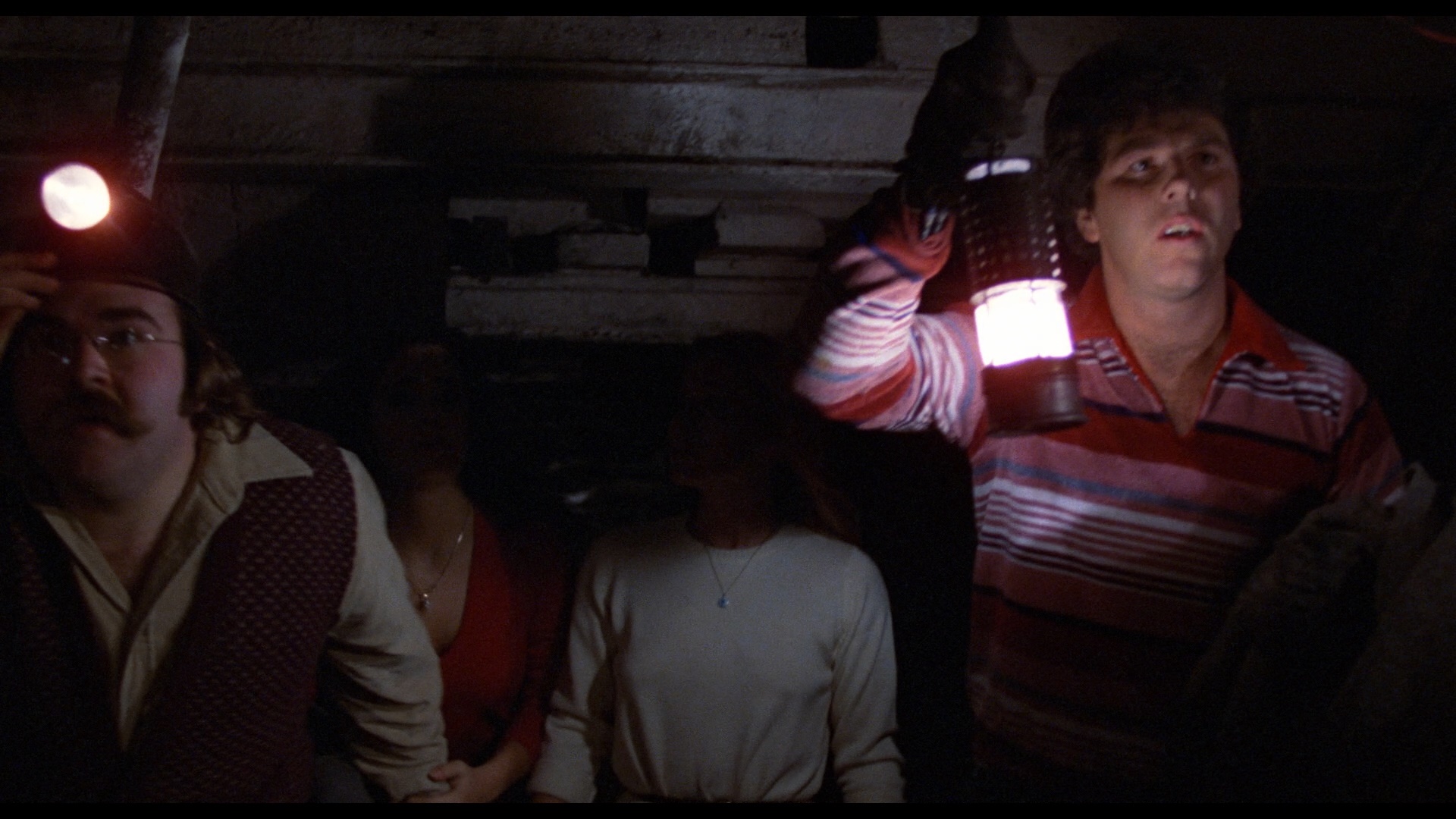 entries in the early '80s slasher boom (and possibly the very best), this Canadian shocker was heavily promoted in monster magazines at the time but proved to be a box office disappointment upon its original release timed just before Valentine's Day in 1981. However, distanced now from the glut of other films around that time and the long shadows cast from the likes of Friday the 13th and Halloween, it has since gone on to be regarded as a classic of its kind, a status helped considerably by the restoration of its harrowing kill scenes originally excised almost entirely by a scissor-happy MPAA.

For the first time in twenty years, the mining community of Valentine Bluffs - "the little town with the big heart" - is holding a Valentine's Day dance for the locals. The most shocking event in local history, a rampage by a miner named Harry Warden who went homicidal after being abandoned down below, still has everyone a bit on edge, but they've decided to put all that unpleasantness out of their minds. T.J. (Kelman), the son of the town mayer, has just returned from a failed attempt to make it on "the West Coast," only to find that his former sweetheart, Sarah (Hallier), has now fallen into the arms of Axel (Affleck). As plans for the dance rev up, a warning is sent in a candy box complete with an excised heart, and event planner Mabel is murdered and found inside a dryer. As the body count mounts, the officials try to shut down the dance-- but the younger generation is determined to celebrate at any cost, even if it costs them their 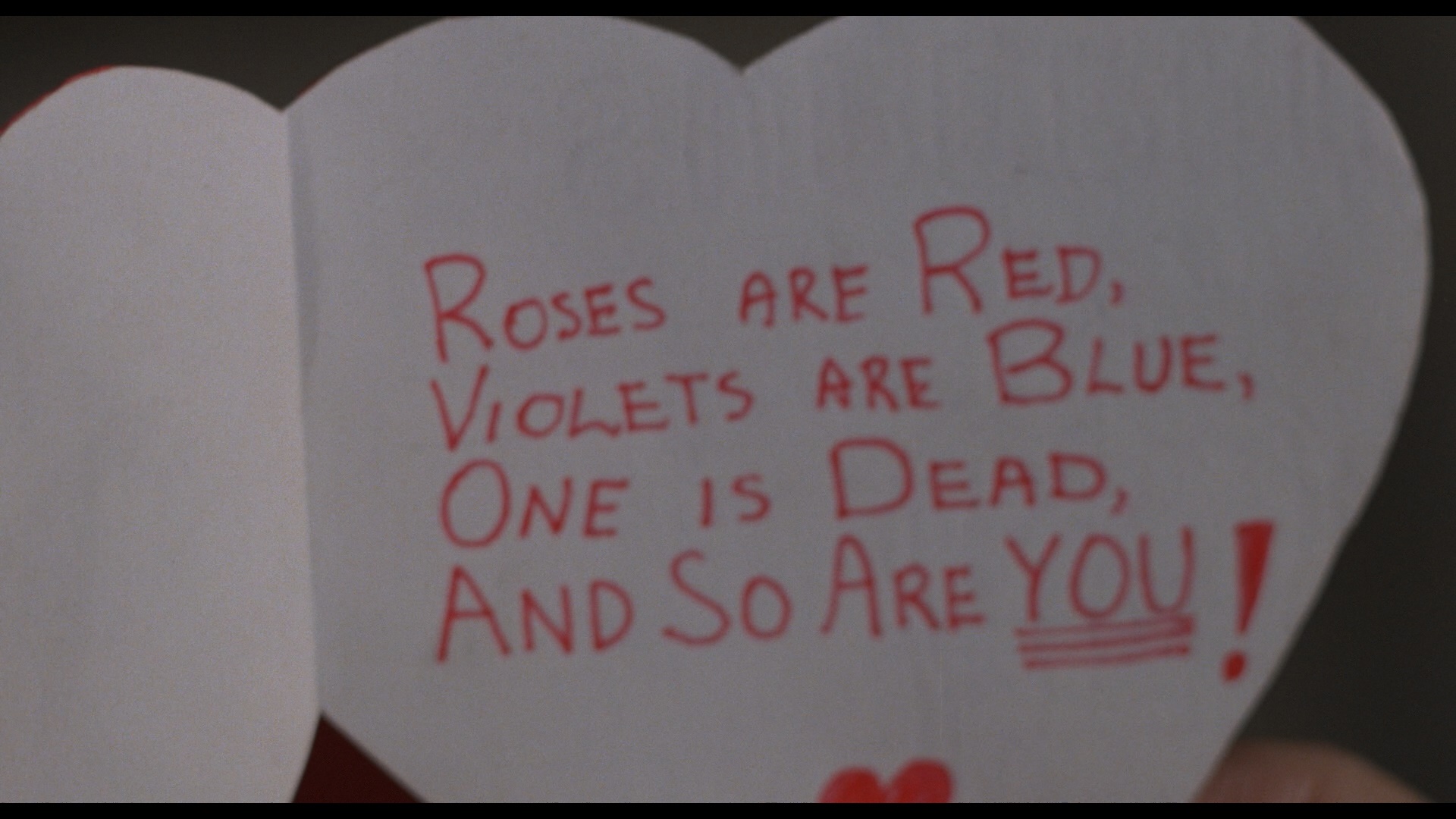 Among the most atmospheric horror films of its era, My Bloody Valentine separates itself from the pack in almost every respect -- most obviously with the focus on slightly older, blue collar characters instead of the usual teenagers. That approach also allows the story to go in some unusual directions including the use of a love triangle as the central conflict before the murders hit, and the mine setting is used skillfully to generate tension and a palpable sense of claustrophobia in the viewer. The reveal of the killer itself isn't a major shock, but the manner in which it's done is a textbook example of narrative economy and closes things out on an eerie, macabre note. Also noteworthy is the effective score by regular Canadian horror composer Paul Zaza (Prom Night), which take a more subtle approach than the standard shrieking strings. 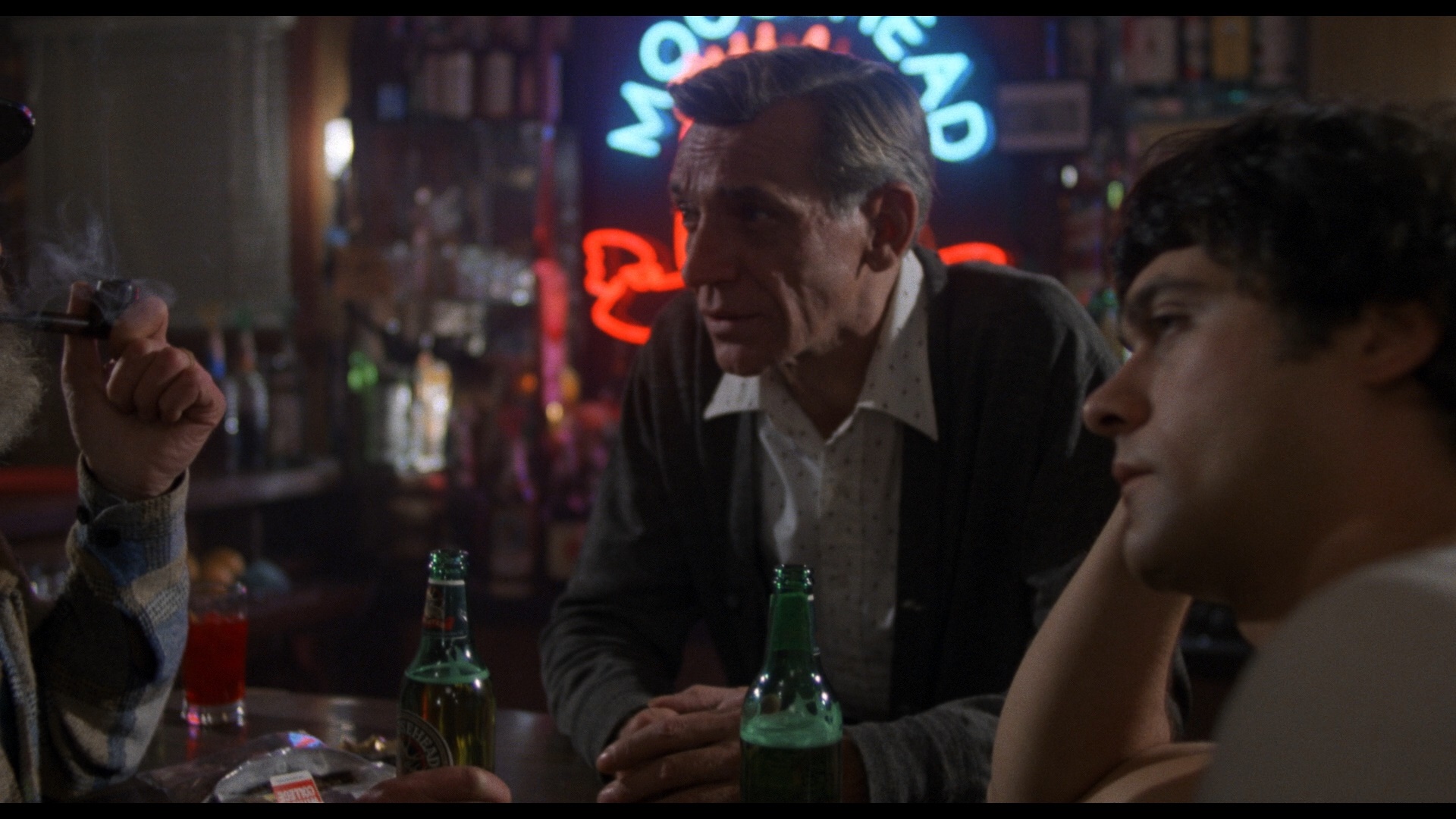 In 2009, the uncut version (or as close to it as possible) of My Bloody Valentine was released on DVD by Lionsgate to time with the theatrical release of the surprisingly solid 3-D remake, though the added footage was taken from a far more worn and desaturated source that stood out dramatically. (The R-rated version was also included, but who cares about that at this point?) A Blu-ray followed shortly afterwards, with a little extra color correction work done on the unrated gore footage but with the contrast in quality still very obvious. (Only one death sequence, a double coitus impalement during the third act, remains missing to this day.) Audio options include a modest DTS-HD 5.1 and original English mono (Dolby Digital) with optional English, English SDH, and Spanish subtitles. The main extra is the entertaining "Bloodlust: My Bloody Valentine and the Rose of the Slasher Film" (20m36s), with writer Adam Rockoff chatting about the evolution of stalk and slash from Grand Guignol through Hitchcock and Romero, after which director George Mihalka, Affleck, Hallier, actor Carl Marotte, and producers Andre Link and John Dunning explain how this film hurriedly came about to meet its release date and overcame obstacles like the mine locale getting refurbished against the production's wishes just before shooting. There's also a lengthy bit about the remake at the end with its cast and crew, too. The extra scenes can also be played separately (with a Mihalka and cast optional intros), followed by the trailer (actually a teaser) and a "Bloodlines: An Interactive Horror Film History" function that doesn't work on some players. 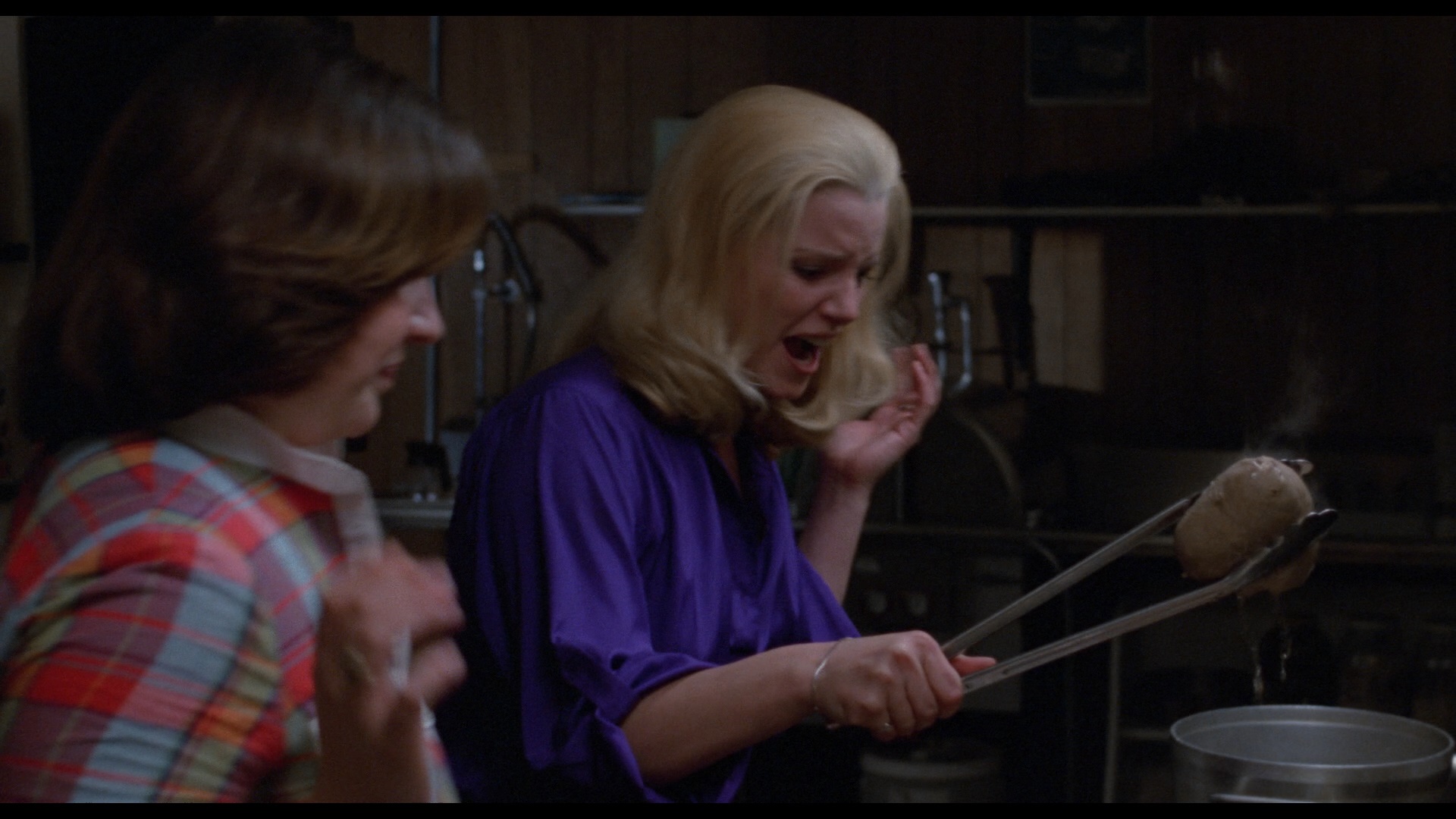 After many years out of circulation, My Bloody Valentine finally resurfaced on Blu-ray in 2020 from Scream Factory in a tremendously expanded two-disc edition. The big news 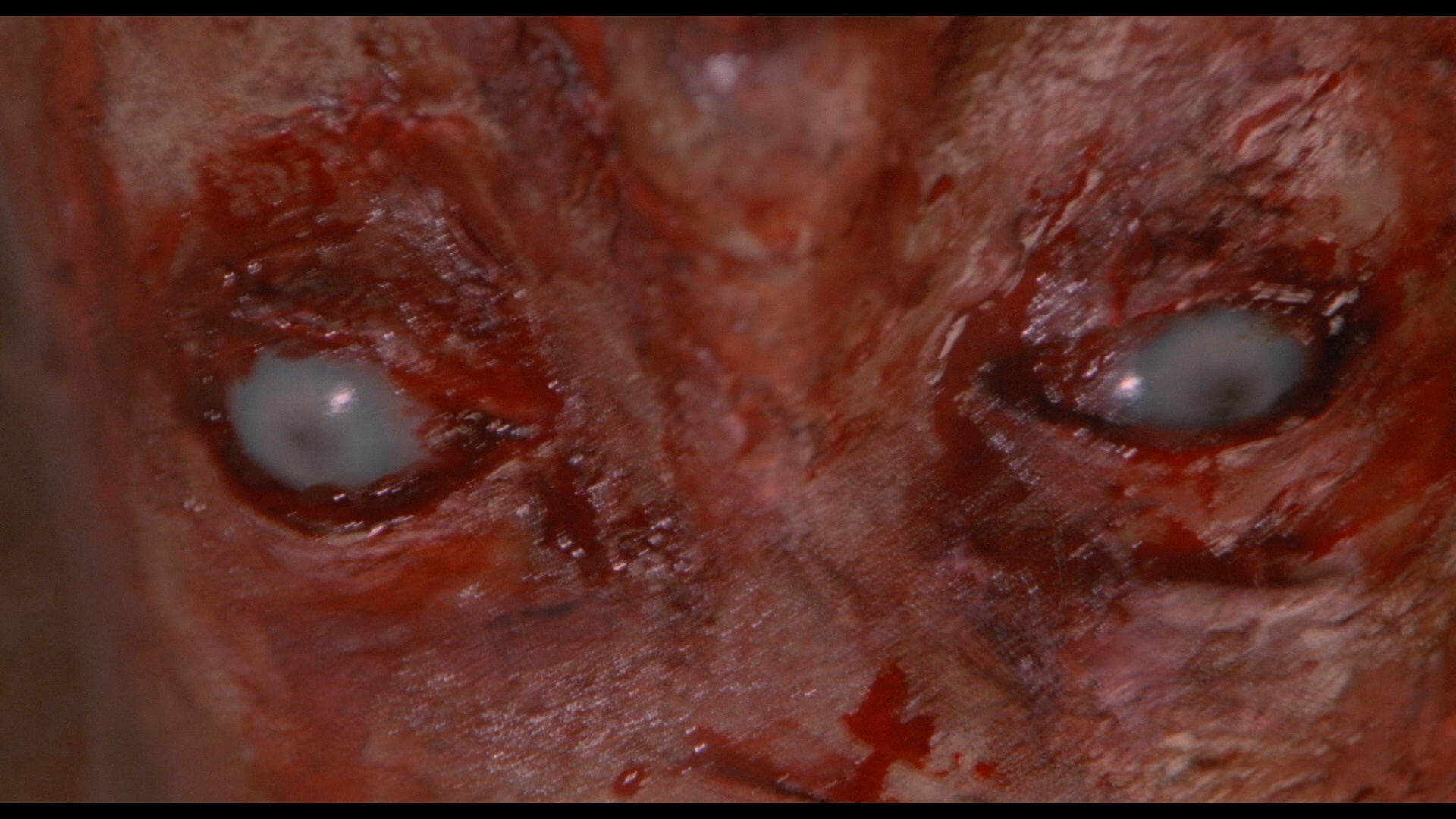 here is the inclusion of the extended unrated version with the restored footage finally in pristine quality that matches the rest of the feature, and wow, what a difference it makes! Both versions are presented here from new 4k scans of the original camera negative and look spectacular, with the R-rated version on disc one and the unrated one on disc two. The earlier transfer was certainly no slouch and already had gorgeous colors (those reds!), with this one advancing even further with a beautiful level of detail throughout. The DTS-HD MA English mono track is included here (no 5.1 redo this time) and sounds great, with optional English SDH subtitles provided.

The first disc also has a new slate of featurettes (presumably finished late in the game since they aren't even listed on the packaging!), mostly from Sean Clark and Justin McConnell. Things kick off with the Mihalka interview "My Anemic Valentine" (24m9s) sketching out how his first horror film came about from a project called The Secret (the original shooting title), the writing process with John Baird, the rushed schedule, the process of determining the killer (which wasn't locked in till fairly late in the process), speculation about what T.J. was doing before his homecoming, the MPAA wrangling, and plenty more. A prodigiously bearded Kelman finally gets in front of the camera in "From the Heart" (14m15s) to chat about his experiences shooting in the mine and doing fight scenes, the inherent anger issues in his 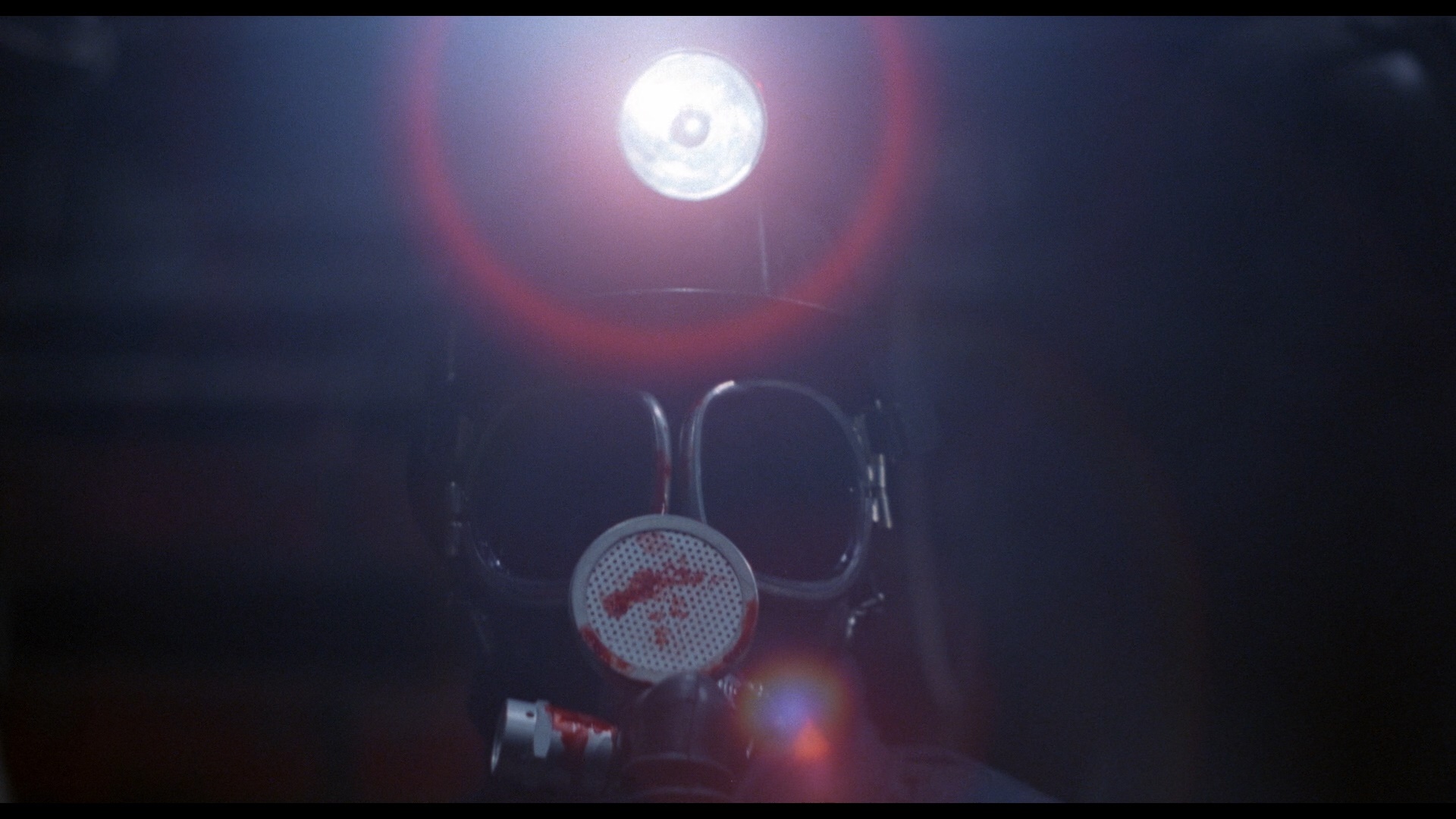 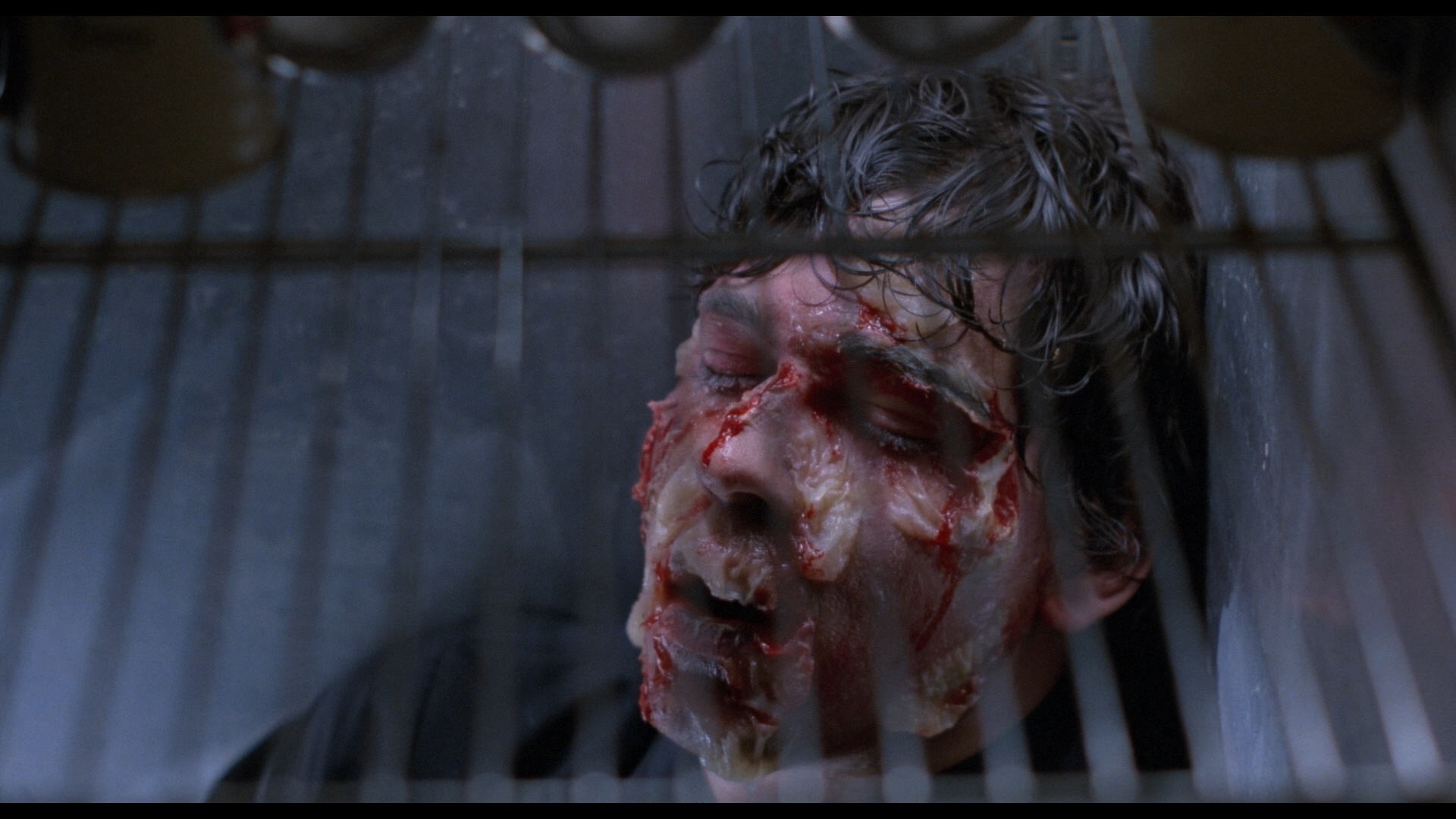 made him a strong suspect, the "corrupt" elements of the Canadian filmmaking process at the time, the sad passing of some cast members, and his thoughts on what he feels was the scariest death scene. Then it's Affleck's turn in "Axel, Be My Bloody Valentine" (14m48s), which touches on his lucky break getting this film after getting sacked from another film in Toronto, his thoughts on the killer's identity, his temporary move to L.A, the issues of appearing in a film that inspired the name of a certain prominent rock band, and his eventual awareness of the cult following. In "Friends Of Mine" (19m20s), Hallier talks about her own current work in the film industry, her thoughts on this film's strengths and its ongoing fan following she enjoys experiencing, and her gratitude to her director for a life-changing first experience in feature films. Actress Helen Udy (who easily gets the most terrifying scene in the film) appears in "Becoming Sylvia" (17m17s) to praise her director, explain that she never went down into the mine (for obvious reasons), and reflect on getting to scream her lungs out for her big exit. Actor Rob Stein pops up in "The Secret Keeper" (27m25s), which has some odd stereo reverb but makes for a cheerful watch as he offers his own take on flying to Nova Scotia for a film with a secret ending and shares a fun little observation about his kissing moment with Udy (as well as the obvious downside of shooting a naked group shower scene in freezing cold water and a grisly bit about nearly losing his thumb!). It also goes 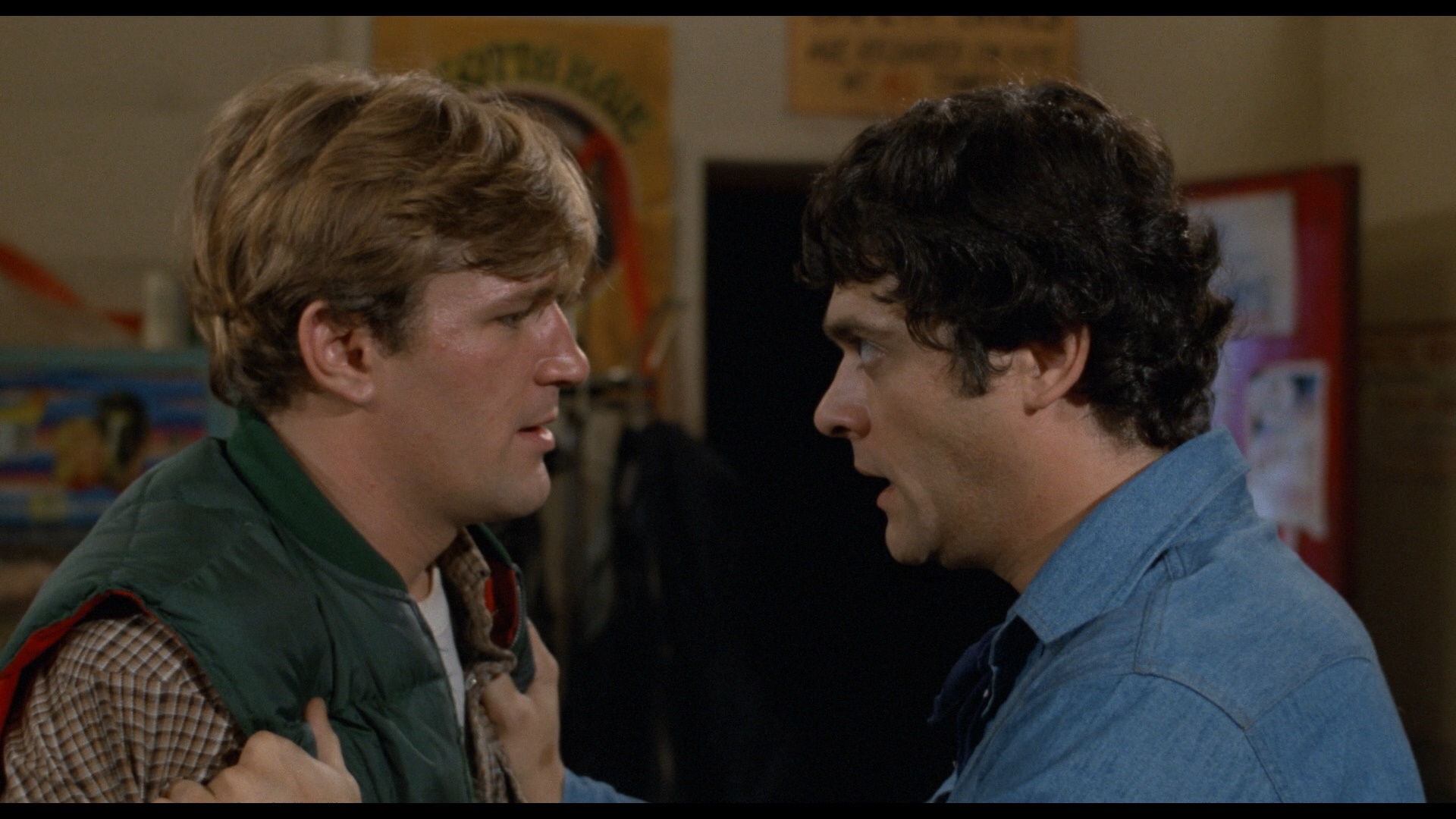 to a very poignant place near the end, too, which makes you appreciate the bond the actors had even years later. Finally from 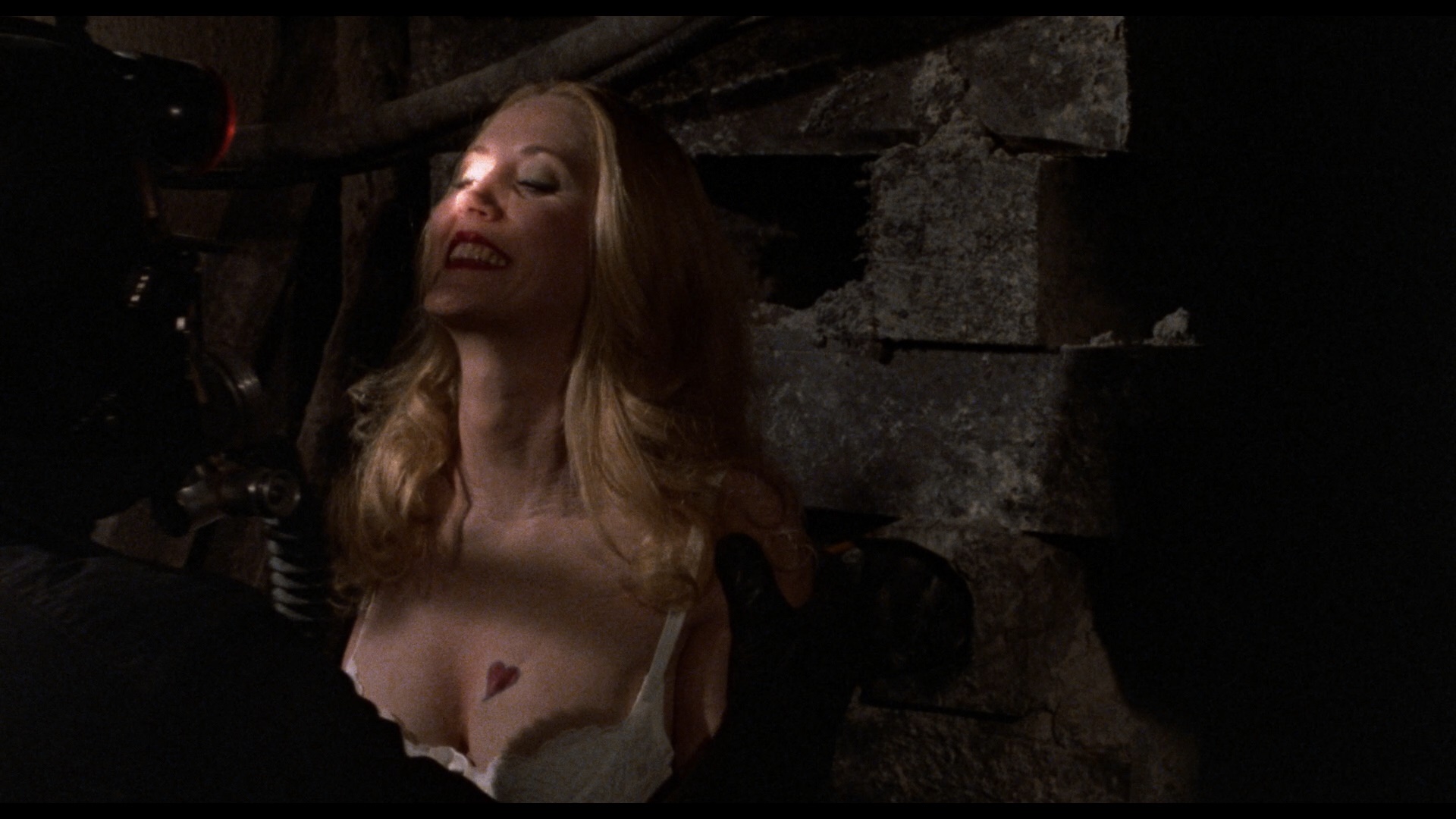 Samuelson Studios comes "Broken Hearts and Broken Bones" (10m36s) with special makeup effects designer Tom Burman, who made an exception to his rule against "revulsion" movies to do this production in Canada (an area he returned to later under more contentious circumstances), the orders to do decapitations for this one (which never materialized), and the "make it up" approach to the murder scenes for both this and Happy Birthday to Me. It should be noted that there's a lot of overlap between the stories on the featurettes (almost everyone tells that same mine location story), particularly given that they're all asked variations of the same questions, so it's best not to marathon them all in a row. The first disc closes out with "Holes in the Heart" (12m29s), a comparison of the two versions, followed by the theatrical trailer, a trio of TV spots, a minute of radio spots, and a very hefty (11m41s) gallery of stills and international promotional material.

The unrated version on disc two comes with a new audio commentary by Mihalka (prompted by someone else who's almost inaudible), which focuses more on the technical aspects of the production including location scouting, the lighting and equipment challenges in the mine, the cooperation of the local town including the hiring of locals to help it out financially, the symbolic avoidance of direct sunlight throughout the film, and some of the footage that appears to be lost forever. There's also a brief 35s intro by him before the feature as well. A 35th anniversary cast reunion panel (46m54s) from 2016's Bay of Blood, Tampa's Horror Weekend, features host Brian Singleton speaking with Mihalka, Stein, Hallier, Udy, and actors Thomas Kovacs, Peter Cowper, Jim Murchison, and Alf Humphreys. Everyone seems to be having a blast as they walk down memory lane, and it's a real treat for fans to see them together while they were all still with us. They also act out that deleted death scene, which really would've been something see. From the same convention you also get an extra treat with Kovacs and friends doing a live, spirited rendition of the film's closing credits theme song, "The Ballad of Harry Warden," so get ready to sing along at full blast. 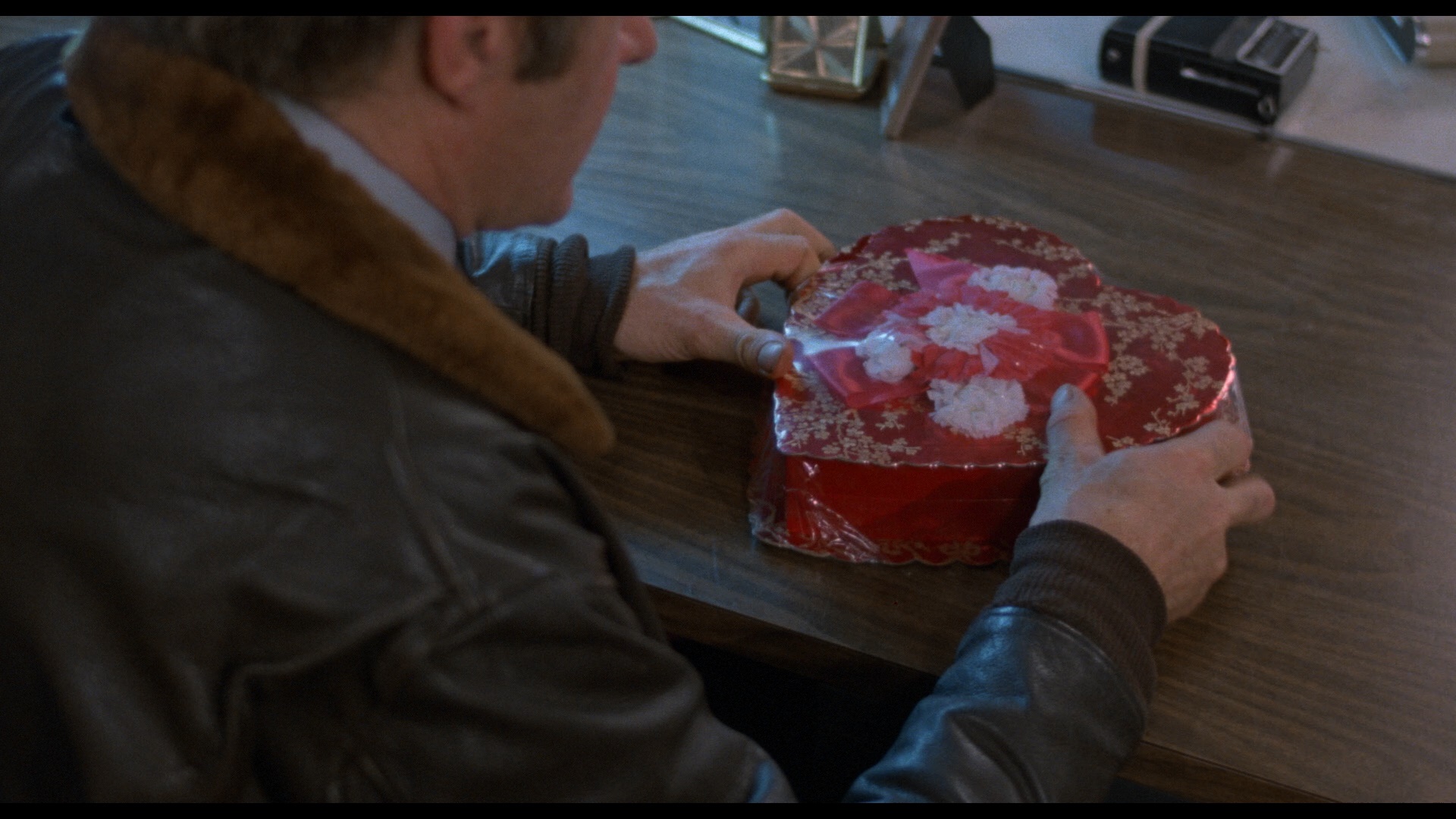 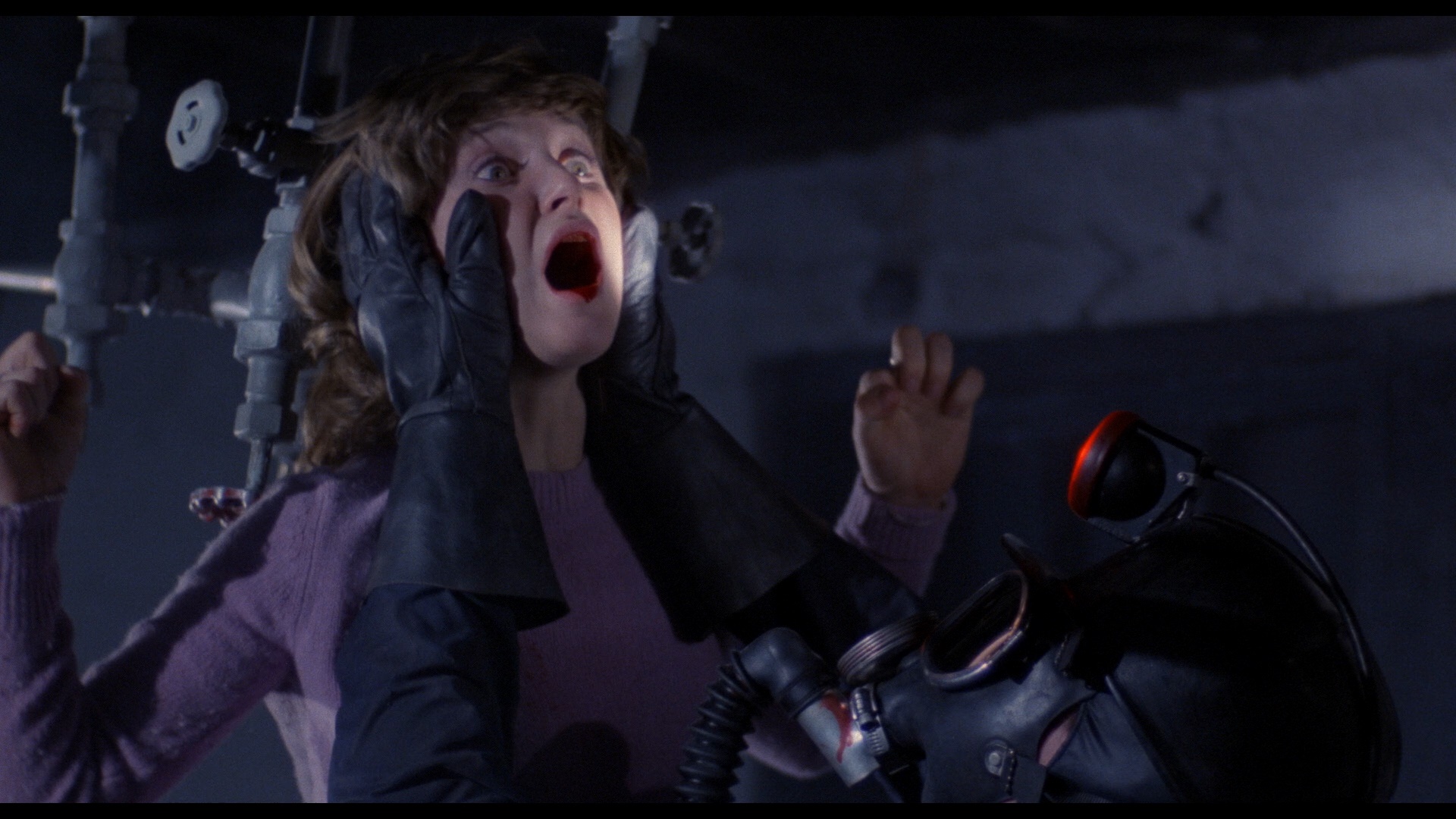 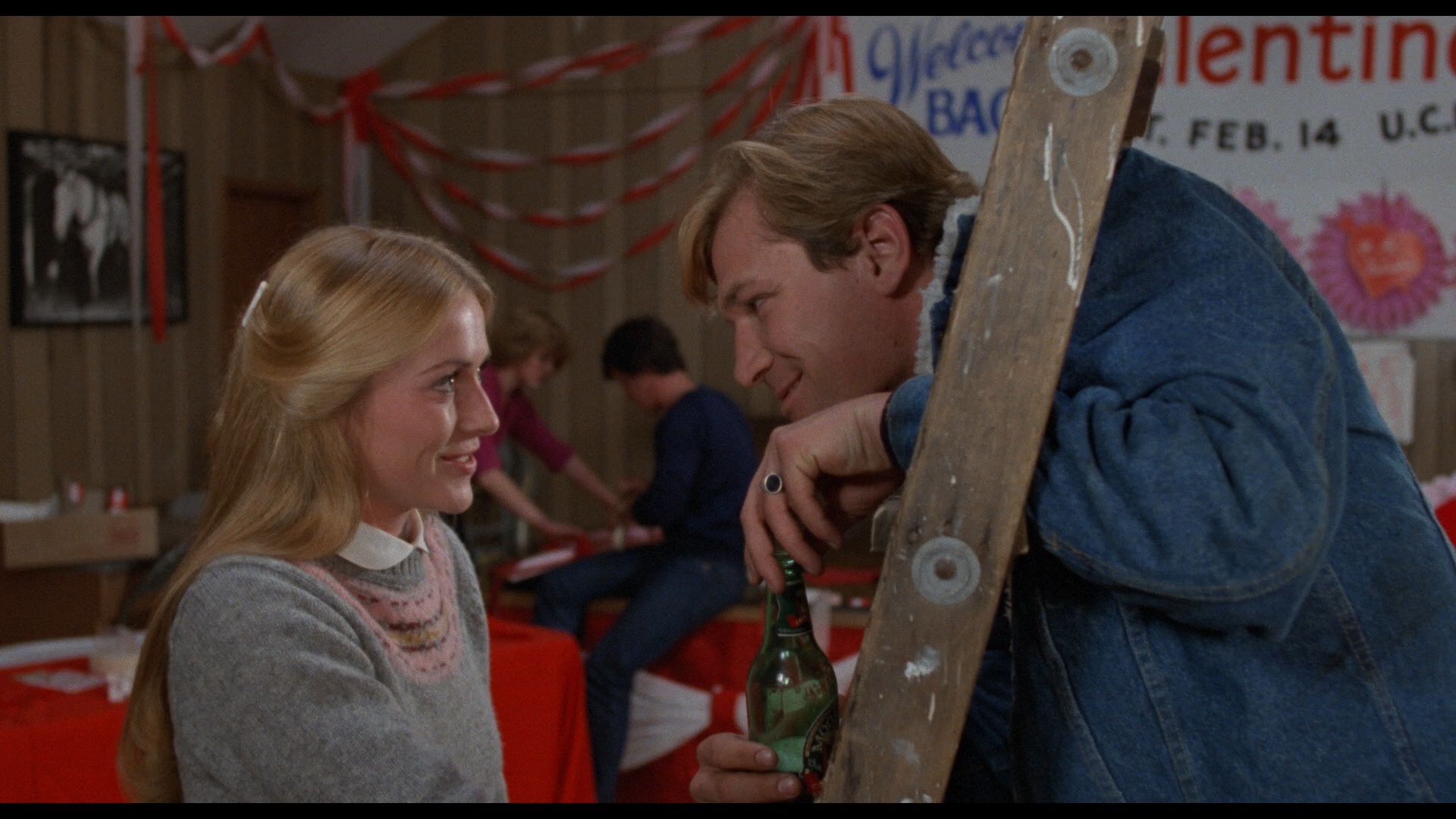 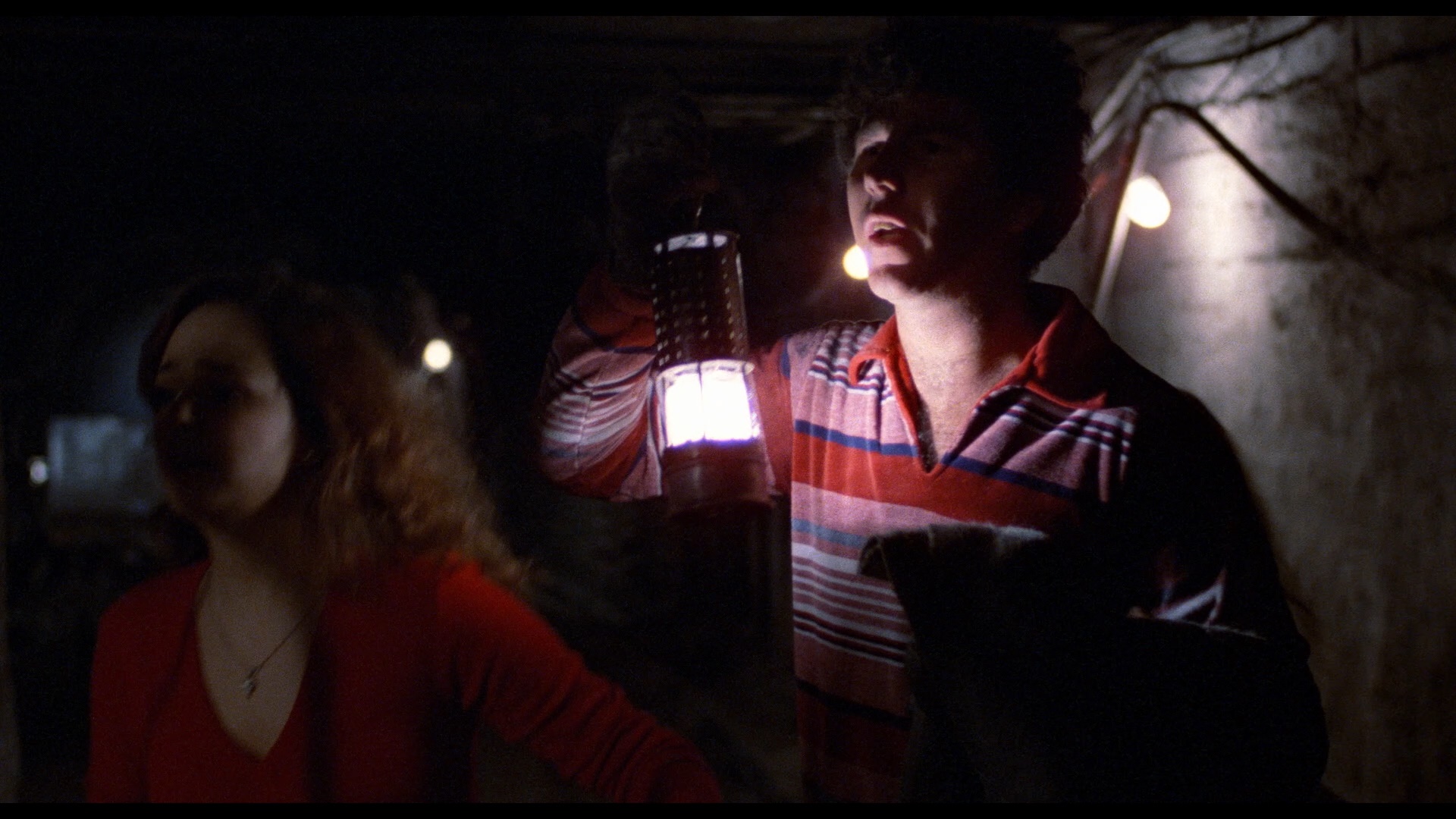 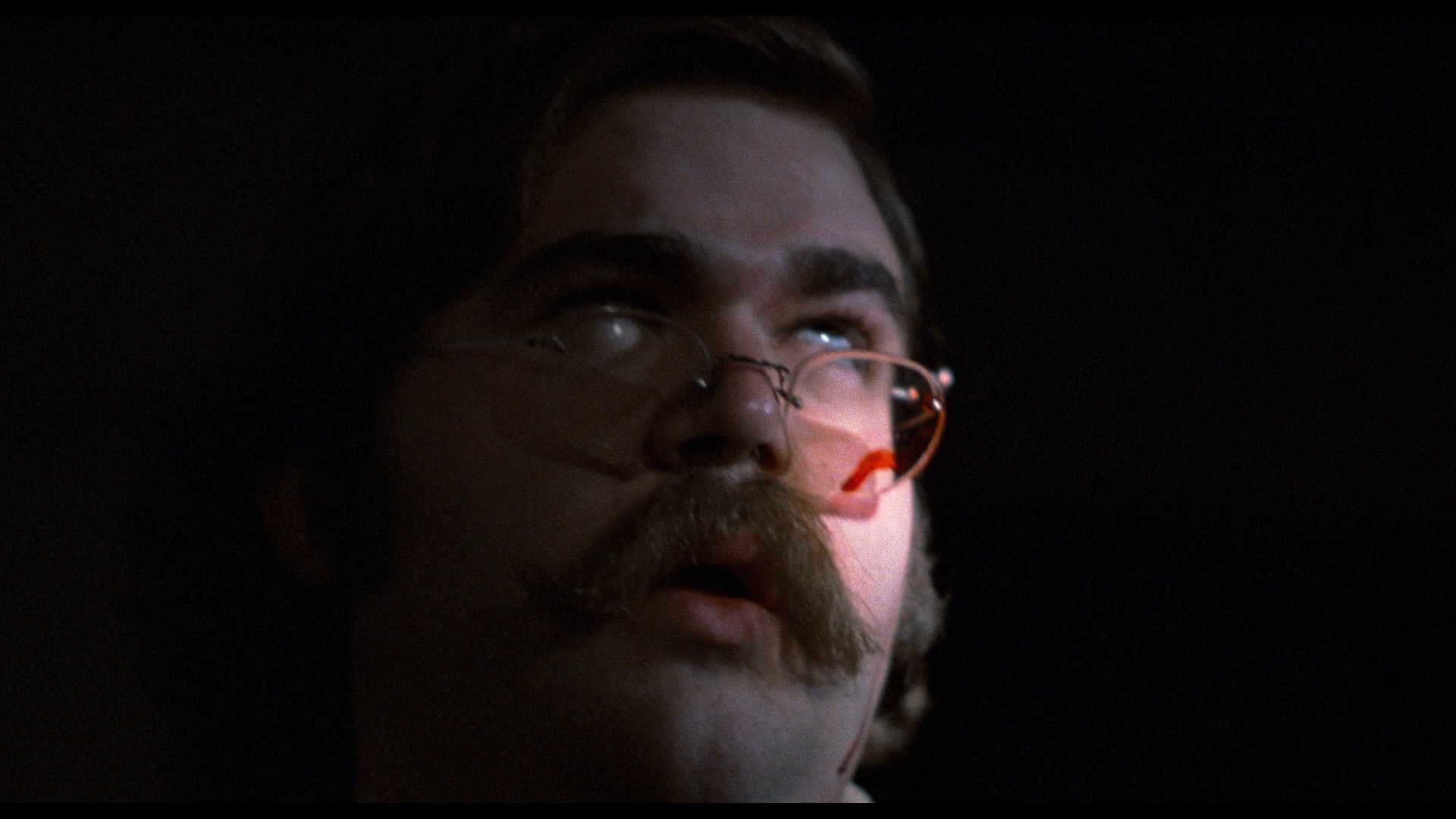 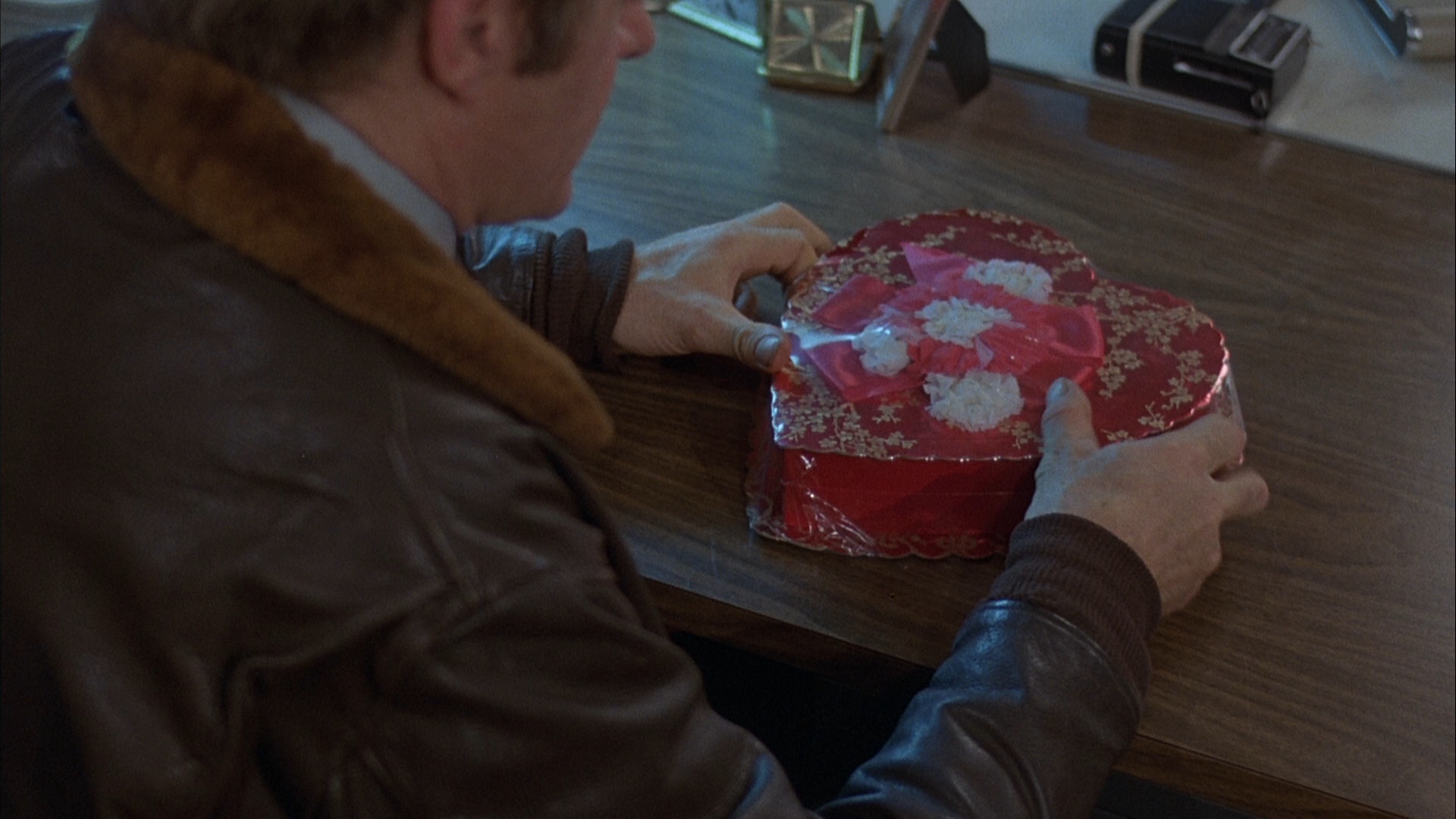 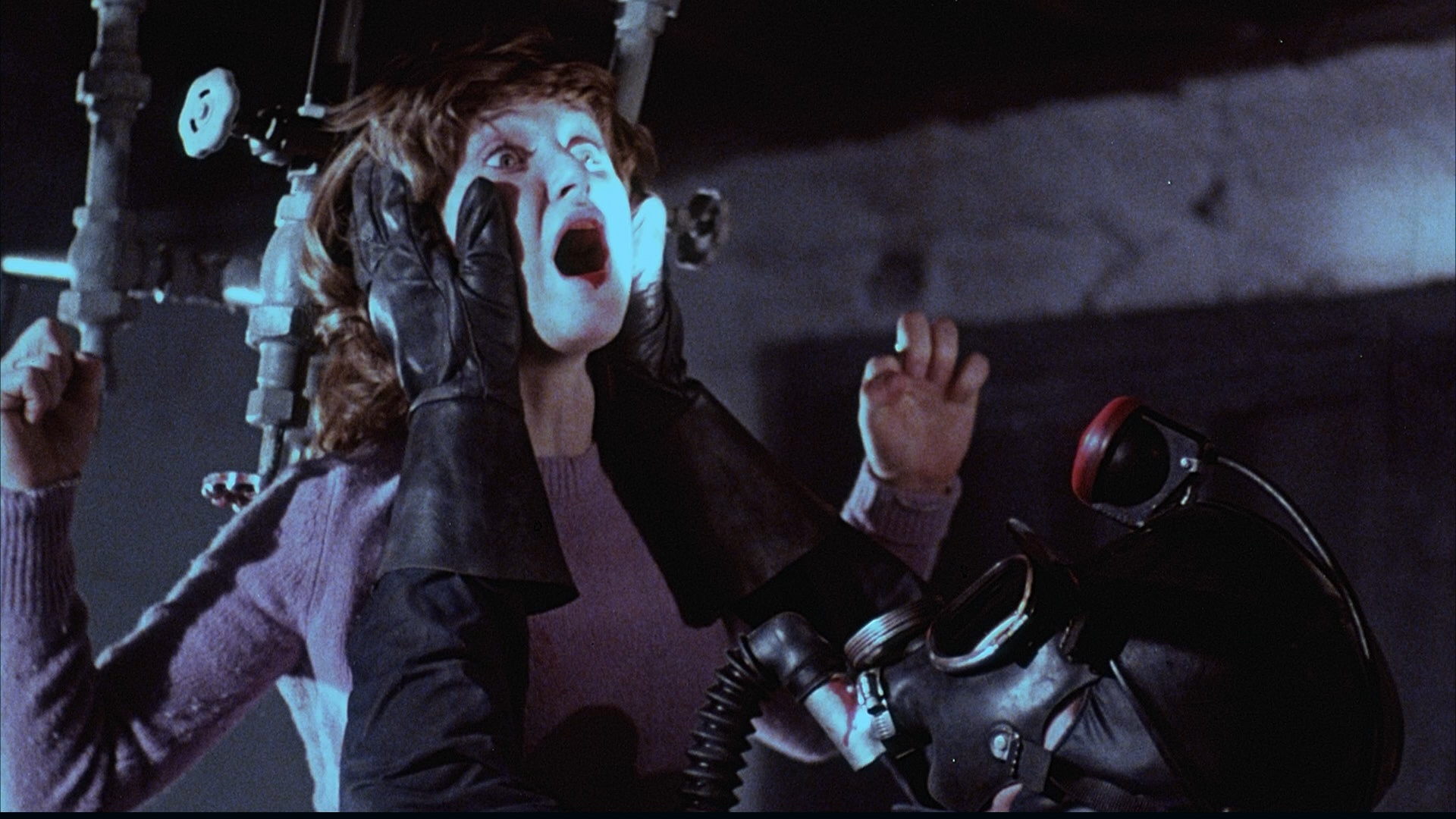 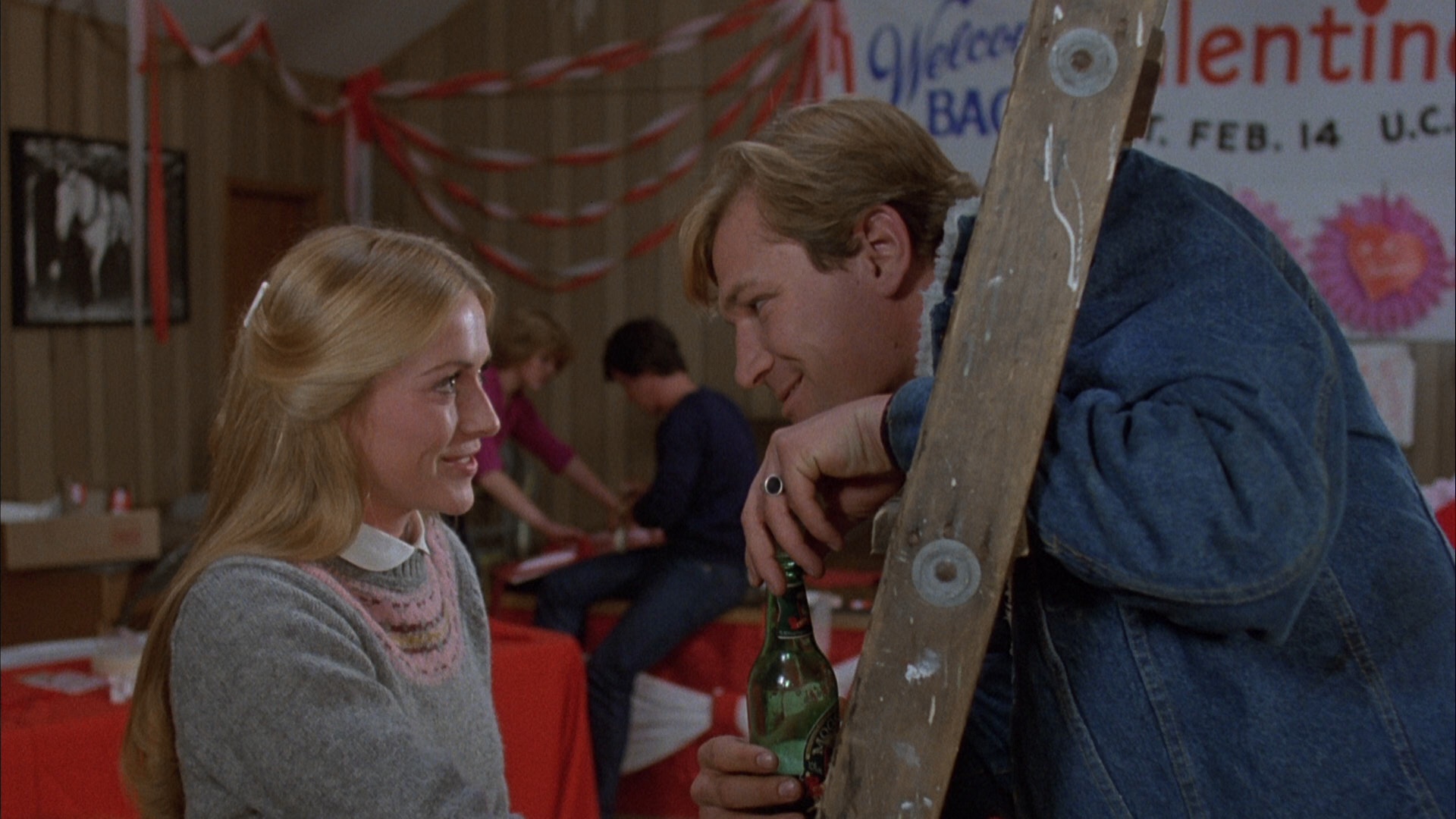 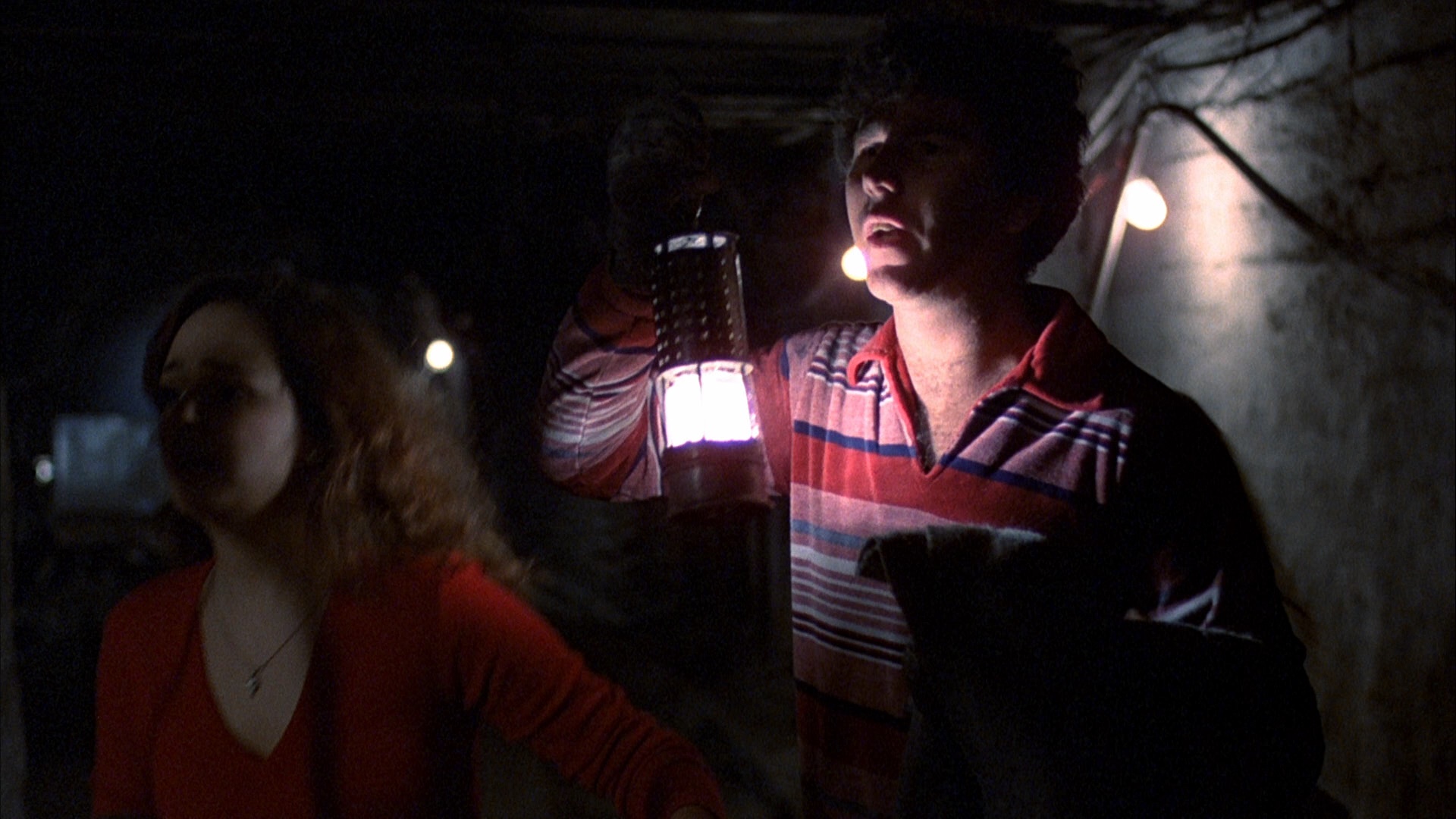 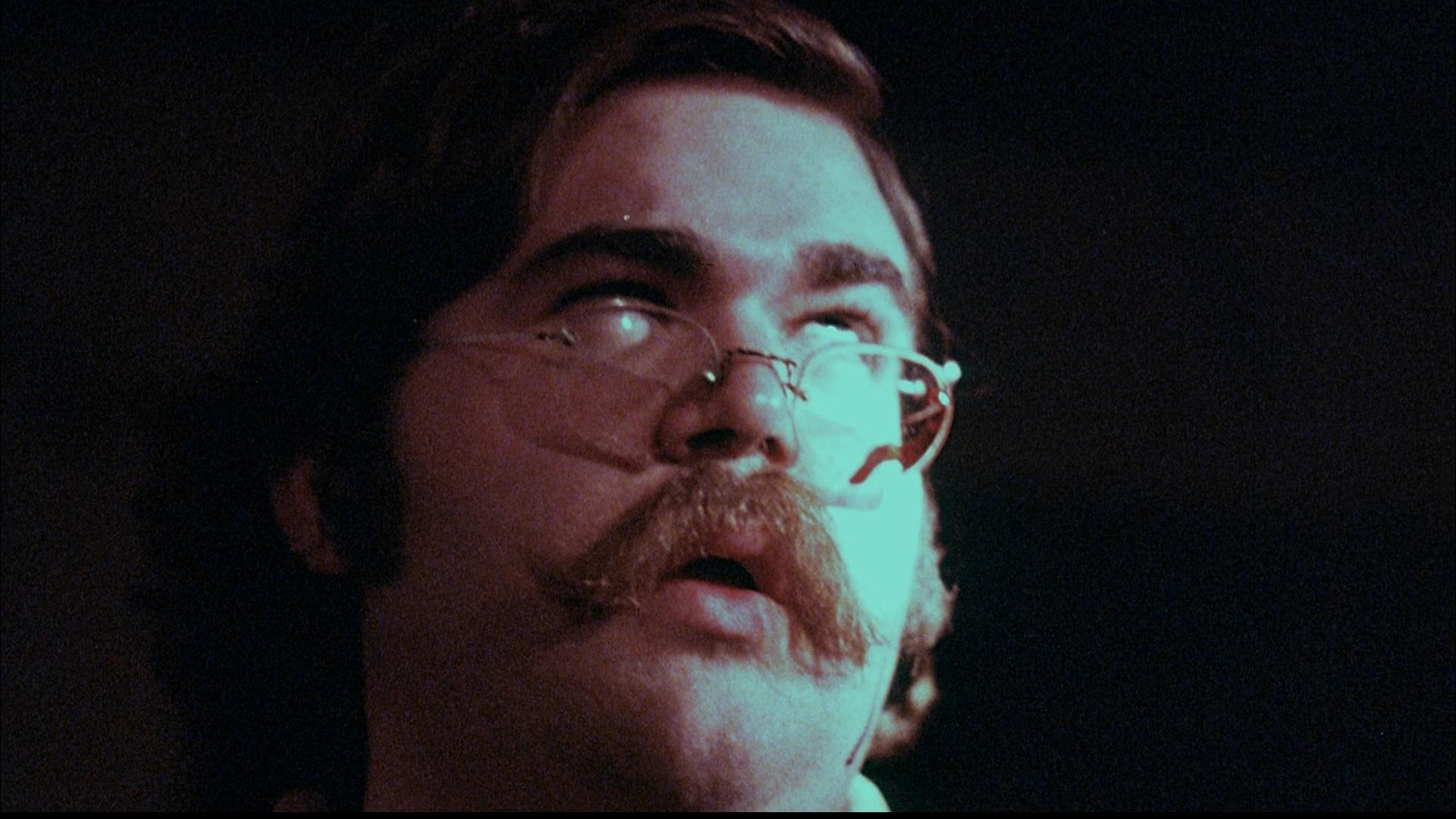