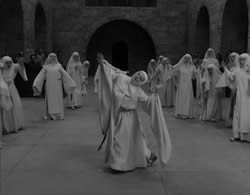 Reports of demonic possession send a series of priests to a remote convent, and the latest in line, Father Joseph Surin (Voit), wonders what he's in for when a local woman predicts his fate rests with a hunchbacked mother. That turns out to be Sister Joan (Winnicka) 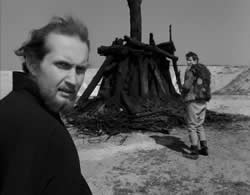 who, along with her sisters, has sent their supervising priest, Father Grandier, to the stake under charges of witchcraft. Now Mother Joan has been targeted for an exorcism attempt, though the attempts to salvage what's left of her soul will take an unexpected toll on the young priest.

If this storyline sounds a bit familiar, well, it should; this was based on the same real-life incidents in Loudon, France which formed the basis of Ken Russell's The Devils (to which this serves as sort of an odd reverse sequel) as well as that film's literary sources like Aldous Huxley's The Devils of Loudon and the John Whiting stage play. Though this film obviously doesn't veer anywhere near the extreme blasphemy and aggressive visual schemes of Russell's film, it's fascinating how many echoes can be found between the two films, especially the sequences involving mass possession and attempted devil suppression.

That said, Mother Joan of the Angels is easily accomplished and powerful enough to stand on its own. Both of the leads are impressive in their disturbing roles, and the spare visual style becomes increasingly creepy as the film progresses until it plunges into full-on gothic horror territory. Director Jerzy Kawalerowicz (who also helmed the impressive Night Train) wrings an astonishing amount of poetry and claustrophobia through the careful use of framing, light, and sound, with the film understandably racking up the Special Jury Prize at Cannes and two additional awards at the Venice Film Festival. 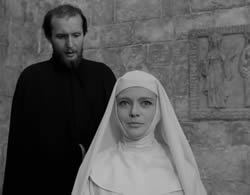 For some reason the film remained something of a buried secret among film fans despite its release in both the UK and the US at the time, with virtually no presence on home video in most countries despite its considerable artistic worth and its ties to some recognized '70s films. 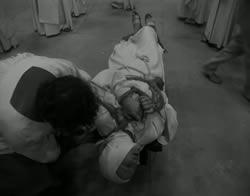 (The ending, as the liner notes interestingly point on, has been cited as an influence on The Exorcist for reasons that should become apparent during a single viewing.)

Second Run released a DVD in 2005 from the best video master at the time, which unfortunately still wasn't all that great. Dull, smudgy, and filled with distortion, it's been replaced with a remastered 2012 edition that plays like an entirely different film. It's a gorgeous restoration, to put it mildly, and the perfect way to make the acquaintance of this fascinating film. Both the aforementioned liner notes and the new 21-minute video appreciation by Michael Brooke offer a considerable amount of information and insight about the film, from Kawalerowicz's directorial career and his religious and political convictions (not Catholic, obviously) to the film's effective use of space and its carefully modulated soundtrack to create the impression of an interior space slowly closing in.