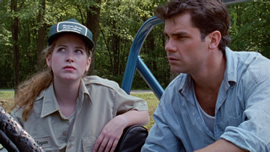 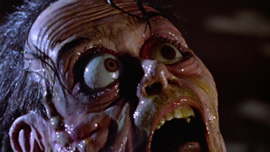 A late entry in the retro creature feature wave of monster movies that seemed to have tapered off with Ticks and 1993's similar Skeeter, this giant mutant mosquito bash came out when the theatrical market for indie horror had all but vanished with fans instead having to resort to direct-to-video releases. This indie production wound up going to VHS from Hemdale (who went bankrupt as soon as they acquired the film) and popped up on other formats over the years, gradually amassing a following with its charmingly retro goofball attitude, plentiful bloody shocks, and of course, the presence of the original Leatherface himself, Gunnar Hansen, in a pivotal part that also winks at his most famous role.

While passing over the earth, an alien spacecraft drops a shuttle of space junk that crashes into a swamp. Unfortunately its contents involve a gooey dying alien that quickly becomes mosquito food, turning the buzzing insects into oversized mutated flying terrors capable of sucking every ounce of fluid out of nearby human prey. One of the oversized skeeters is juicily run over by aspiring ranger Meg (Loiselle) and her boyfriend Ray (Lovelace), and they soon end up crossing paths with a host of colorful characters, some of whom quickly become mosquito fodder. Among the potential survivors are Air Force scientist Parks (Dixon), who's busy hunting meteors, park ranger Hendricks (Asheton, late member of The Stooges), and bank robber Earl (Hansen), whose partner in crime goes down fast and leaves him turning to the side of good to help his fellow man. Other assorted campers and residents get picked off as our heroes are chased and terrorized overnight until they wind up making a final stand at a farmhouse that turns out to be a nasty little surprise of its own. 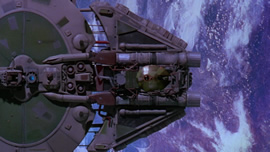 At this time it was almost impossible to do a straight-faced monster movie on a low budget, especially after films 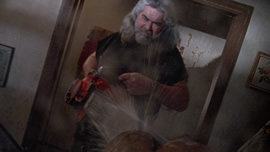 like Tremors proved to be popular thanks to their knowing sense of absurdity, so Mosquito piles on enough gags to keep the proceedings light without tipping over into pure goofiness. It also helps that it's helmed by Gary Jones, an experienced effects artist determined to prove that a shoestring budget didn't mean a film couldn't have impressive monsters. The end result is a combination of stop motion, animation, and good old-fashioned rubber monsters, which gives the film a lot of quirky personality even if viewers more accustomed to slick CGI will find it tougher to swallow. All in all, it doesn't really break any ground, but Mosquito is a good popcorn muncher worth popping in for some fast-paced, bloody fun with lots of giant bugs.

The first DVD of Mosquito arrived early in the format's history from Image, taken from the same full frame master created as a basis for the VHS. That one went out of print after a couple of years and started commanding stupid amounts of money online, but now you can chuck it aside thanks to the 2015 reissue from Synapse as separate Blu-ray and DVD editions. Obviously you'll want to go for the Blu-ray if possible as it both looks and sounds much, much better than before. Included with the disc is an insert explaining the transfer was scanned in 3K and downsampled to 2K from the director's 35mm interneg, though most of the feature itself was shot in 16mm (with optical effects shots done in 35mm). As a result, some softness pops up in a few shots, just as it's always been part of the film. Audio can be played in 7.1 DTS-HD MA or 2.0 DTS-HD MA (or standard Dolby Digital 5.1 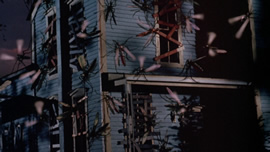 and 2.0 on the DVD), with optional subtitles in English, Spanish, French, and German. The surround activity is pretty limited for the most part, but it does come to life with some rousing directional effects during the final half hour (and yes, you get some fun buzzing effects in the rear channels at times). Also included is an commentary with director and co-writer Gary Jones, co-producer David Thiry, and co-writer and cinematographer Tom Chaney, which stays focused on the production aspects of the film including the decision to use various effects techniques (including the most expensive shot, which was licensed from outside sources) and the various friends and double-duty participants popping up throughout. 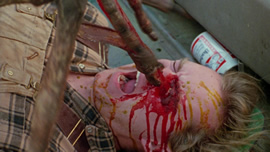 However, that track is easily outdone by the massive "Bugging Out!," a 75-minute(!) documentary by Red Shirt Pictures about the making of the film that kicks off with some amusing local TV news coverage of the production before plunging into a combination of talking heads and behind the scenes footage. Jones serves as the major voice here as he chats about some of his work on other films in the Michigan area (including Moontrap and Thou Shalt Not Kill... Except, whose director, Josh Becker, has a small role in Mosquito and turns up to chat here, too), while Chaney talks about meeting Jones on The Carrier and getting his gig on this film. Thiry also returns to go over the nature of Michigan productions at the time, and other participants include actors Lovelace, Hansen, Loiselle, Mike Hard, and Margaret Gomoll, who cover everything from the early casting process through the logistics of being attacked by gigantic fake mosquitos and doing love scenes with chewing tobacco. The pocket frog story is pretty great, too, the whole reunion atmosphere (and eulogy for the late Asheton) end up being quite touching in the end. Also included is a 7-minute reel of deleted scenes and a very entertaining 40-minute selection of behind-the-scenes footage, both with optional Jones commentary, as well as the theatrical trailer and a still gallery.