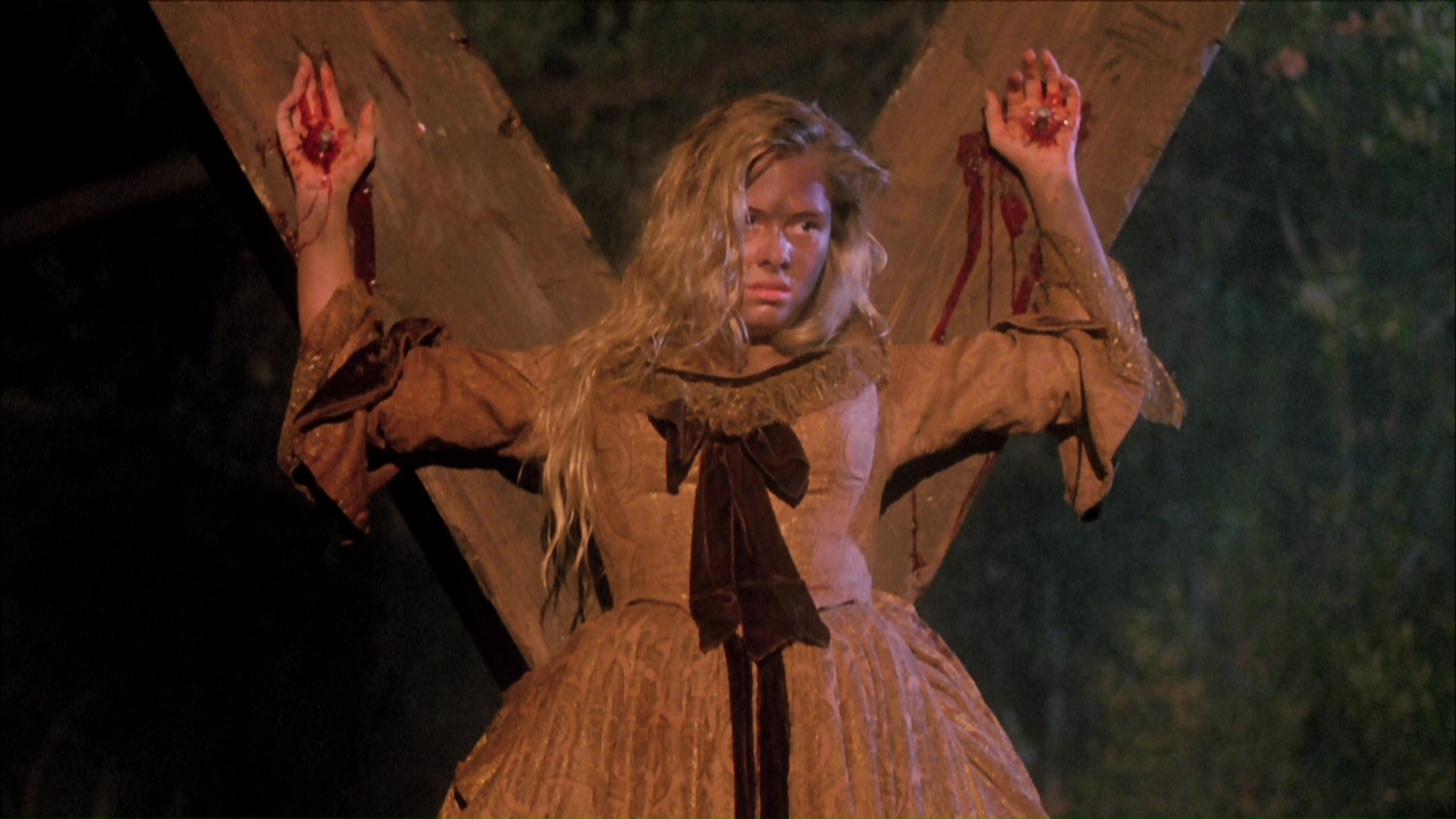 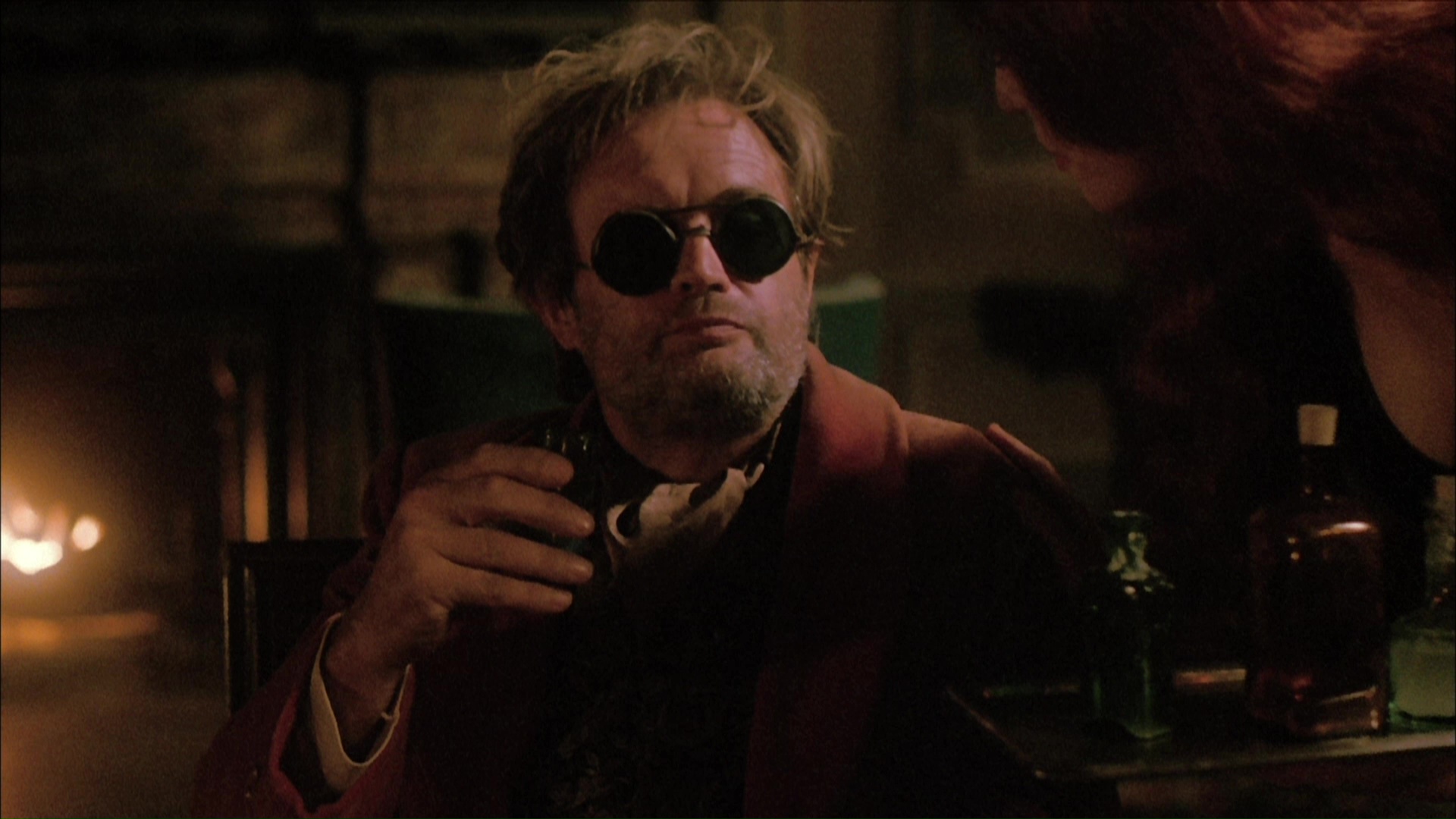 Considering he was really the one who put Edgar Allan Poe on the mainstream horror map in the '60s, it was only natural for Roger Corman to revisit America's most influential scribe of the macabre in later decades. The results weren't nearly as iconic as the legendary Corman-Vincent Price collaborations, but there's a certain perverse charm in seeing how Corman's trademark budget-impaired imprint fared in the Bush Sr. era with projects like this one and Masque of the Red Death. For The Haunting of Morella, Corman served as producer for his company at the time, New Concorde, with frequent collaborator Jim Wynorski (Not of This Earth, Chopping Mall, and the sublime Deathstalker II) handling directorial reins for a story Corman had earlier adapted himself as the first part of Tales of Terror.

Anyone familiar with Wynorski's output shouldn't be surprised that there remains very little of Poe here apart from a few character names and the general theme of mother-daughter possession. Instead what you get is a T&A-packed riff on Mario Bava's Black Sunday, which is directly quoted in the opening sequence and used as a basic narrative template throughout as an executed witch is revived from the grave by a follower to wreak vengeance and inhabit her own bloodline. In this case the witch offed in the opening is Morella (Eggert), who's crucified in a graveyard and has her eyes jabbed with a poker after her husband Gideon (McCallum) turns against her, just after bearing his child no less. Seventeen years later, Morella's baby daughter has grown into the beautiful Lenora (also Eggert), while Gideon is now a recluse wearing dark sunglasses due to his milky white eyes (presumably because Vincent Price used to do that, too). 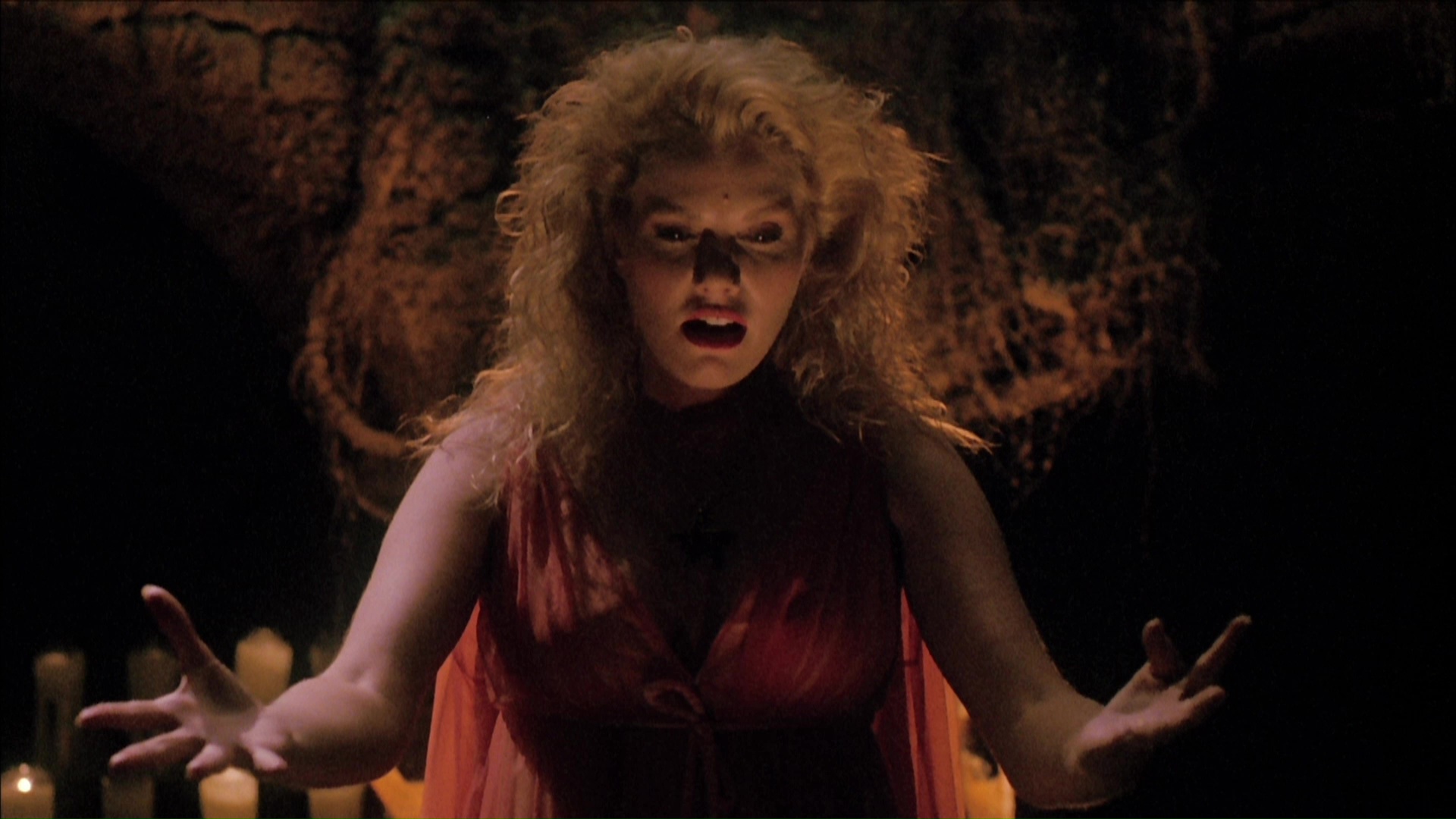 When Guy (Halstead) arrives to handle the disposition of Morella's estate to Lenora from a trust due to her impending seventeenth birthday in three days, the stage is set for the dead witch's return via the help of her lesbian lover, Coel (Clarkson), now the household governess. Nightmares, murder, and possession soon follow, with Lenora's soul put in mortal danger. 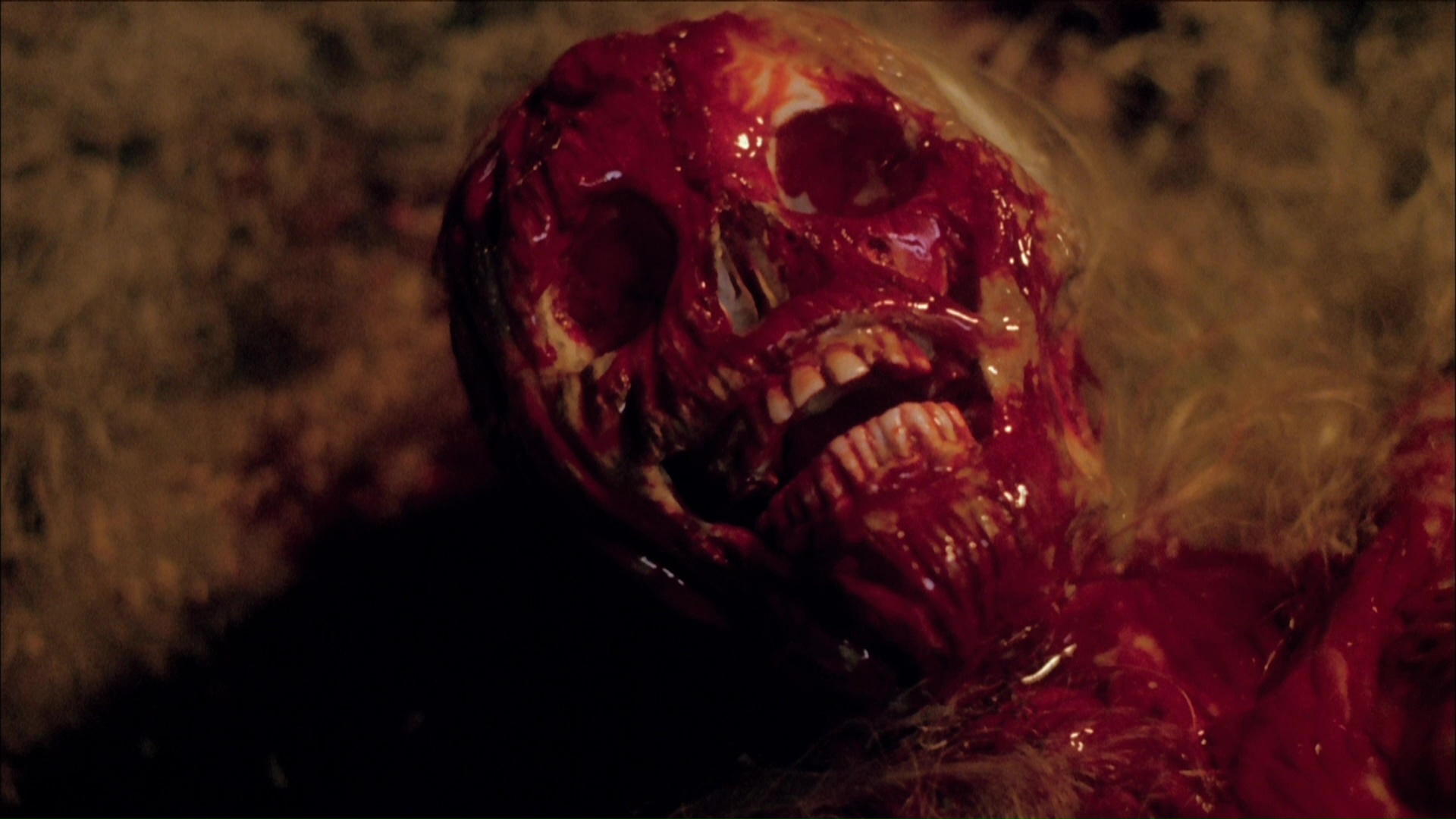 First of all, anyone expecting a traditional horror film will be very confused by the half-hour mark due to the languorous nude bath scenes, lesbian clinches, and decidedly period inappropriate hairstyles and underwear. The scares are limited to some amusing bits of gruesome makeup and stage blood, such as a flashback showing Morella bathing in blood (complete with an Eggert body double) and a lengthy, colorful nightmare scene clearly designed to pay homage to the older Price films. However, if you love late '80s and early '90s Corman films, this one delivers plenty of disreputable fun, most often when it doesn't even bother trying to stick to the source material -- such as an astonishing, out of left field waterfall sequence with Ford and the statuesque Clarkson that's long been a highlight for many viewers. McCallum does a fine job as the film's Price stand-in, while Eggert does her best with her dual roles and succeeds more often than note (despite the fact she doesn't seem like she ever stepped foot in New England a single day of her life).

The Haunting of Morella only played in a tiny handful of screens before bowing on VHS from New Concorde in 1990, with a DVD from the same (very old) full frame master issued in 2003. Scorpion Releasing issued the first widescreen edition of the film on DVD in late 2015, sporting a fresh HD scan from the interpositive in Roger Corman's vaults. 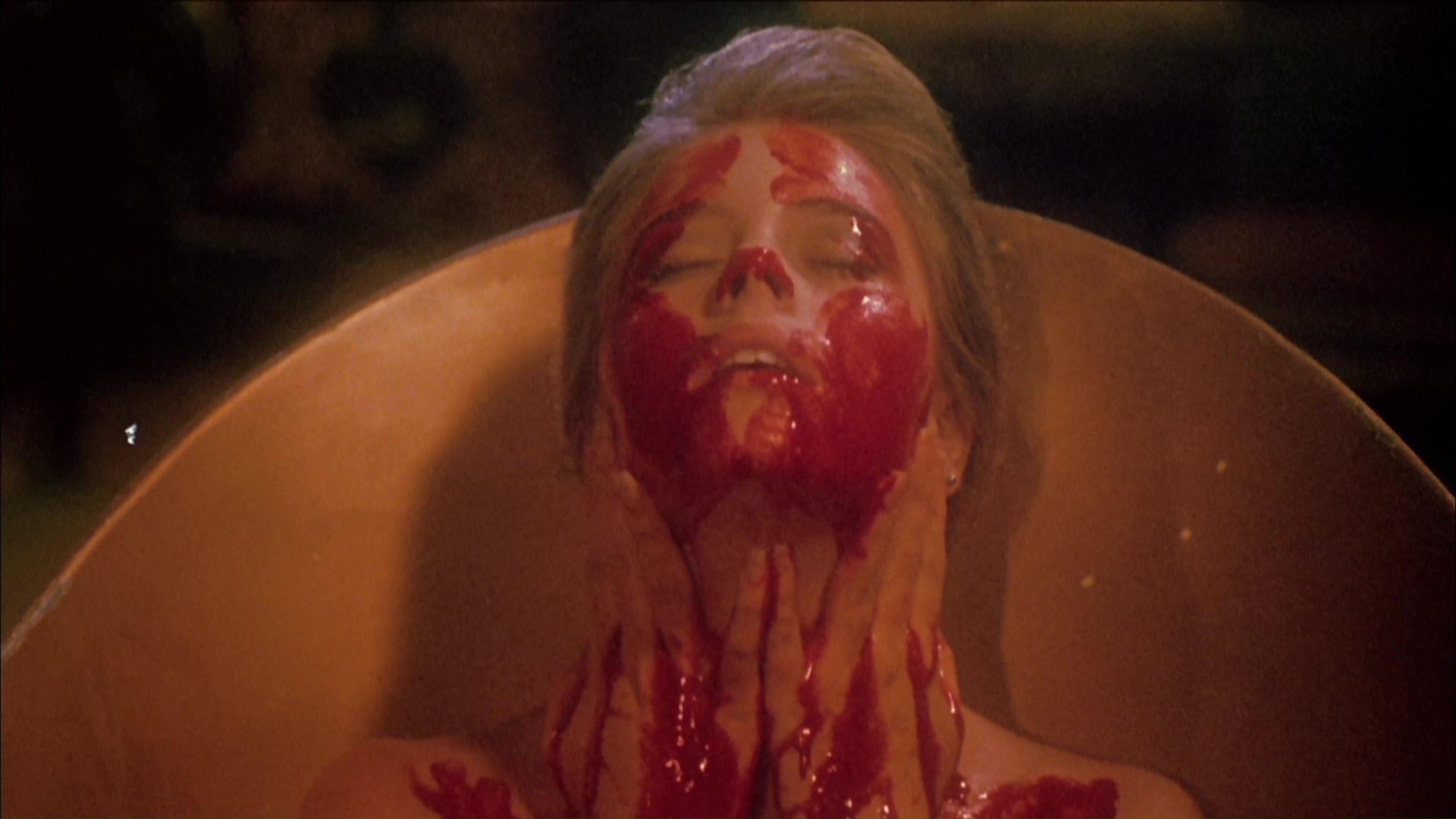 The same transfer made its way to Blu-ray in 2016, sold exclusively through Screen Archives, and the bump in 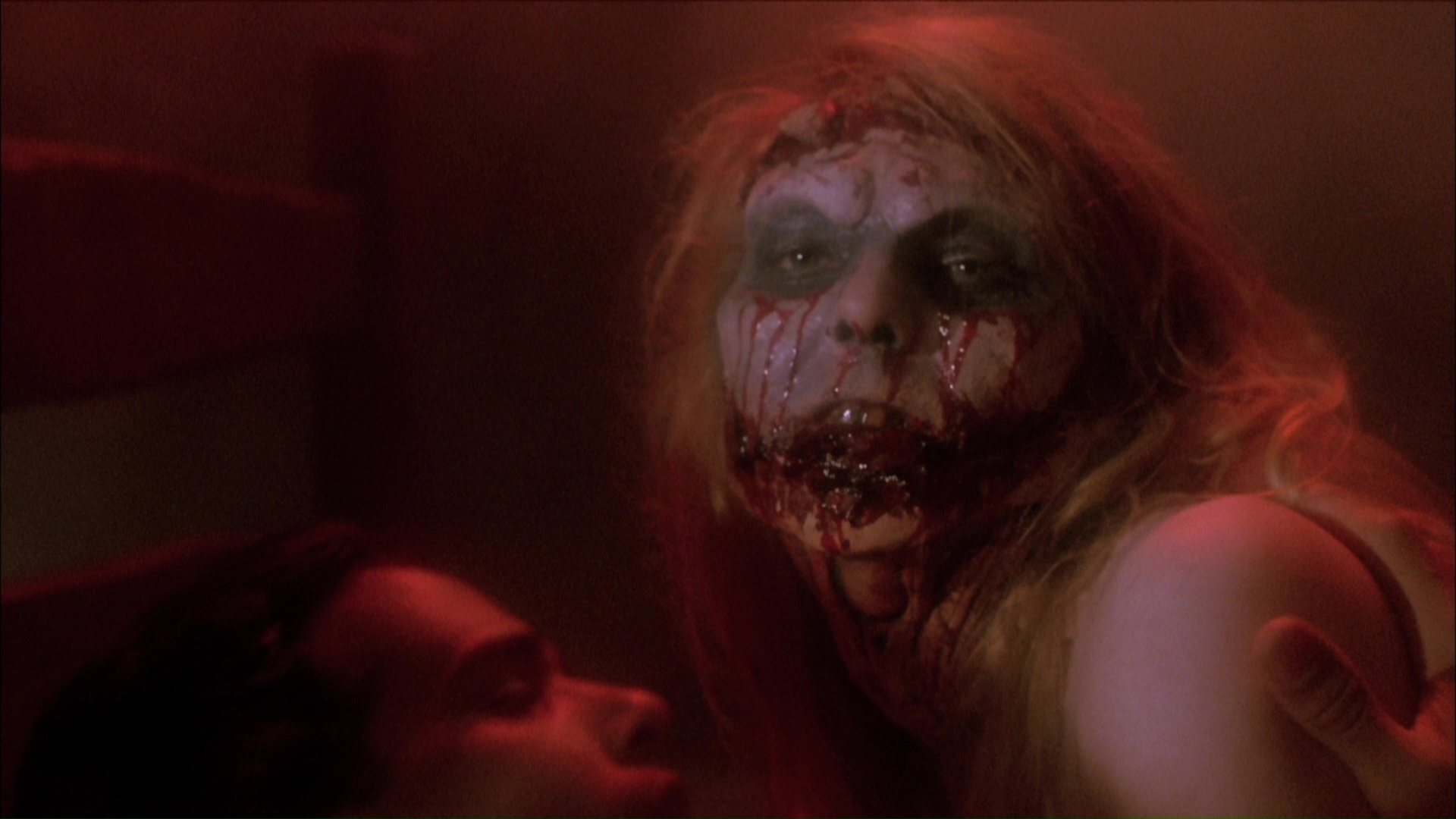 resolution helps with the many diffused shots and powdery lighting scenes. It's a deliberately soft film, but the night scenes in particular come through far more legibly. Interestingly, the New Concorde VHS and DVD versions were slightly longer (82 mins. on the dot) with a handful of extended bits, mainly establishing shots and one or two lines of additional dialogue; the theatrical cut appears to be what's on the Scorpion disc at 80 mins. 23 sec., with a two-minute reel of the bonus footage included as an extra (running longer due to slates and some extra repeated footage for context). As you'll see, it makes little difference either way. All of the relevant extras from the DVD are carried over here, the most substantial being a commentary by Wynorski and Steve Mitchell, who worked with him as a writer on Chopping Mall and performed several duties here including second unit director. The conversation is very entertaining and barely lets an empty second go by, with fond memories of every single actor and notes about the cold shooting conditions (with poor Ford nearly freezing in her swimming scene). Also included are the original trailer and the older release's 5-minute interview with Corman, who seems very genial about the whole production and talks about how Wynorski shepherded it from conception to release.