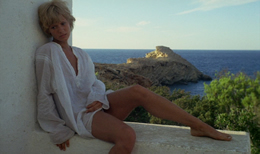 Three years before the philosophical jungle freak-out of The Valley, director Barbet Schroeder and rock legend Pink Floyd first caused a stir with one of the most unusual and unsettling counterculture drug films, More. The film was extremely strong stuff at the time, including detailed procedurals on how to cook up heroin and some unabashed nudity by its leading lady, former American drive-in starlet and future Italian scream queen Mimsy Farmer. Though still best known for its classic soundtrack, the film remains a fascinating feature debut for its director and a compelling snapshot of an era that now seems so remote it virtually plays like a fantasy film.

After finishing his college degree in math, young student Stefan (The Grand Duel's Grunberg) thumbs his way across Europe from Germany and winds up at a party where he hooks up with Estelle (Farmer), a young lady who immediately spells trouble. Their relationship quickly turns sexual and criminal as they start off robbing for cash and, upon arriving at the sunny paradise of Ibiza, experiment with free love and descend into hard drug use. 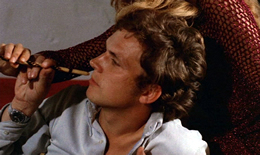 Like the later Trainspotting, this film upset a lot of people with its impartial view of drug use, explaining the process and the euphoric feelings which become part of the routine and explain the lure it holds for even unsuspecting "straight" inductees like Stefan. Despite the incredibly downbeat ending, it's not really a finger-wagging diatribe about how bad drugs are; instead it's a sun-drenched but melancholy look at an alternative lifestyle many were exploring but often never escaping with their lives (or at least their senses) intact. The beautiful and subdued soundtrack doesn't hurt, either, containing some early Floyd standards like "Cymbaline" and "Green Is the Colour." Both of the leads offer brave and compelling performances, particularly considering the essentially off-putting nature of the characters as they become more divorced from reality. Amazingly, Grunberg didn't even speak English when he made the film! 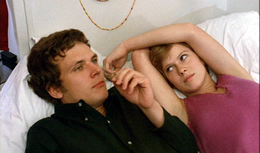 Not surprisingly, More encountered many censorship challenges over the years; however, most of these were over its controversial mid-film heroin cooking scene in a small kitchen with Stefan casually rattling off the ingredients rather than the uninhibited nudity of the two stars. The dialogue in this scene was partially censored in France (and eventually semi-restored with subtitles over the silent areas on the American DVD release from Home Vision), while over a minute of it was completely cut out for the first BFI release in the UK in 2003. Fortunately the BFI reissue, a dual-format version with both a Blu-Ray and DVD, features a completely uncut version (with Grunberg's dialogue in the scene intact for what may be the first time ever on home video) in a new HD transfer approved by Schroeder. The Blu-Ray in particular easily blows away past versions, looking incredibly filmic and detailed throughout but really coming to life once the action shifts to Ibiza. The vivid blue skies and richly detailed rocky landscapes look terrific in HD, and the print damage that plagued prior versions is minimized here to almost nothing. The film is mostly in English, though the occasional injections of German and Spanish dialogue have optional English subtitles. Extras include trailers for this film and Schroeder's The Valley and Maitresse, while only the DVD includes a standard def 17-minute featurette called "Making More." It's an interesting video piece with Schroeder returning to the shooting locations and discussing his working relationship with the actors, the story of how he got his first directing gig here, and the impromptu dining scenarios the cast and small crew had to concoct in this then-remote location. The enclosed booklet also contains an essay on the film by Emilie Bickerton and her bio of the director, a terrific essay about Farmer by Maitland McDonagh (who summarizes her roles as "sociopaths, junkies, killers and hell-bound human wrecking balls"), excerpts from a Farmer interview with Brian Greene, and notes on the score by Bella Todd.