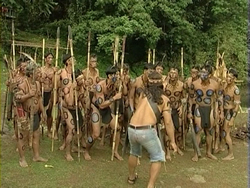 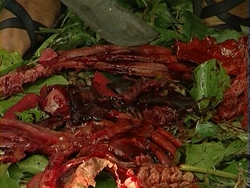 maestro par excellence with a slew of trashy sexploitation, women-in-prison, action, and horror films from the late '70s into the early '90s. His most notorious films today are easily Hell of the Living Dead and Rats: Nights of Terror (both of which marked his official entry into the world of Blu-ray), but the rest of his filmography is littered with filthy nuggets like Libidomania, Guardian of Hell, Cruel Jaws, and Shocking Dark, not to mention co-directing the insane Zombie 3.

After retiring from the world of 35mm filmmaking in 1996, many assumed that would be the last we'd hear of Mr. Mattei. However, he came back roaring with a vengeance around 2002 thanks to that refuge of the budget-conscious filmmaker, shot-on-video exploitation films. For five years he cranked out numerous gory or sexy titles populated with unknown actors, horrific dialogue, and shameless pilfering from other films. Wholly unique among this twilight chapter in his career are the two titles unleashed on DVD by Intervision, which were shot in 2003 to cash in on the newfound cult success of Ruggero Deodato's infamous 1979 film Cannibal Holocaust on the midnight theatrical circuit and home video. At this point anything Italian with the word "cannibal" in the title was finding an audience, so it was only natural to give viewers Mondo Cannibal (originally circulated to potential overseas buyers as Cannibal World) and In the Land of the Cannibals, which was originally screened in English under a far more generic title, Land of Death. 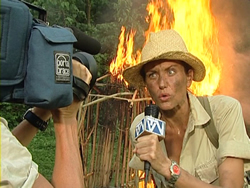 If you love batty SOV films with a lot of personality and almost no aesthetic value whatsoever, you've definitely come to the right place with both of these. Mondo Cannibal is the more straightforward of the two as it essentially apes the plot of the Deodato film with a plucky but morally compromised reporter, Grace (surprisingly convincing one-shot actress Wagner), who decides to traipse off to the jungle to feed the public's ever-growing lust for sensationalistic bloodshed. The rest of her crew is almost as callous as 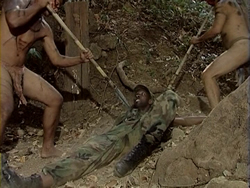 she is, and while the natives are initially peaceful types who like to keep to themselves, Grace decides to rouse them into violent action with an escalating string of atrocities captured before the impartial gaze of her camera. Meanwhile the footage is viewing back home by an increasingly uncomfortable room of TV executives who get to see how low their star reporter will sink for a juicy story, which naturally backfires in a big way when tribe's more secretive, brutal neighbors decide to come pay a visit.

The chintzy digital look of this film ensures it will never, ever be confused with Deodato's troubling classic (which didn't stop it from being released as Cannibal Holocaust 2: The Beginning in some quarters), but there's rarely a dull moment to be found as this one checks off all the boxes of cannibal cinema (apart from animal cruelty, which is mostly absent from both films). However, things definitely get a bit weirder with In the Land of the Cannibals, which manages to quote Cannibal Holocaust just as explicitly (even including a wholesale recreation of the whole "swim naked with the natives so they lead you to a macabre shrine" sequence) while also integrating entire scenes copied from Predator of all things. (Even the DVD packaging calls this out!) This one has even more alternate titles than its cousin, popping up around the world 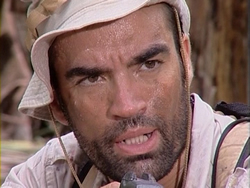 labeled everything from Cannibal Holocaust 3: Cannibal vs. Commando to Cannibal Ferox 3: Land of Death. Fortunately the whole mercenary soldier angle means this is considerably sillier and less nihilistic in tone as it follows some gung-ho types into the jungle to rescue Sara (Matic), a general's daughter whose blonde loveliness has of course made her a prime tribal target. A local guide named Romero (yuck, yuck, played by Morales) heads them into enemy territory with the uber-macho Wilson (Randall) as the ostensible leader. Then they basically run around the jungle a lot, shots are fired, the natives pause occasionally to chow down on innards and force them on the interlopers, 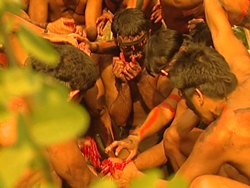 and everyone clashes for the big finale. And that's about it.

Far lower on gore (apart from the aforementioned gut munching and a few stabs and squibs here and there) but higher of fun schlock value, In the Land of the Cannibals is an oddly endearing genre mash up with the aura of a high school student film accidentally mutated with an Italian drive-in sensibility. The clumsily dubbed dialogue is highly amusing from start to finish, the modest action scenes are plentiful, and the Filipino jungles are a fairly acceptable substitute for the South American settings of the genre's more ambitious and famous classics. Anyone wandering into this by accident will probably a migraine five minutes in, but if you love the idea of smushing together '80s action cliches with an Italian cannibal film, you've come to the right place.

Both titles make their American home video debuts from Intervision with transfers as impressive as the source material will allow. The 1.33:1 video lensing isn't anything exceptional, of course, but the fairly sharp detail levels (perhaps too crisp in some cases given the supposedly scruffy subject matter) and vivid colors are perfectly satisfying. The Dolby Digital stereo tracks do what they can with the generic electronic scores and canned dubbing, while both discs feature their respective trailers (not necessarily with the same titles found on the packaging). Guilty pleasure junk food to be sure.