An often unheralded cornerstone in the Gothic horror revolution of the early '60s, this multinational yarn purportedly based on a 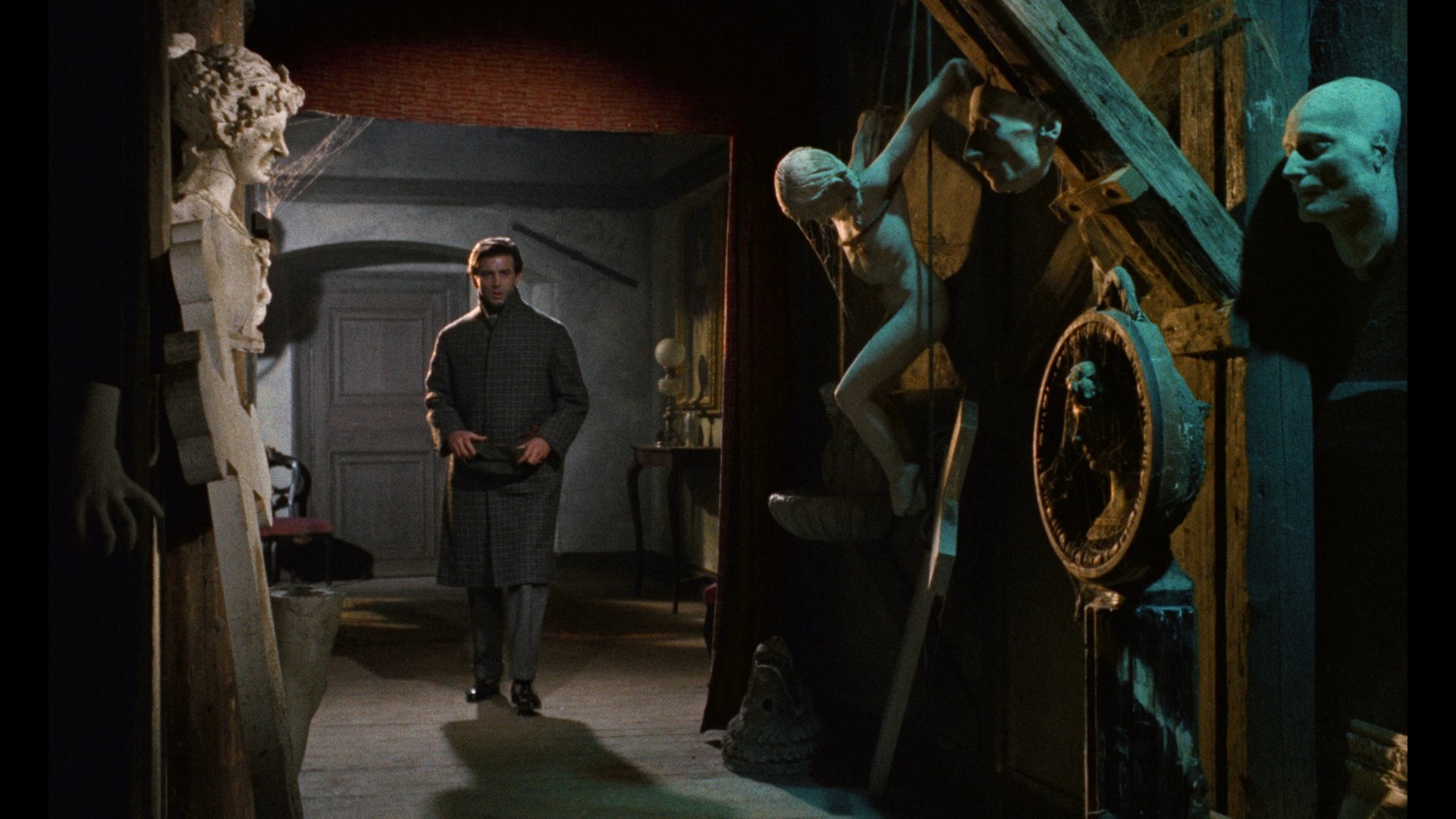 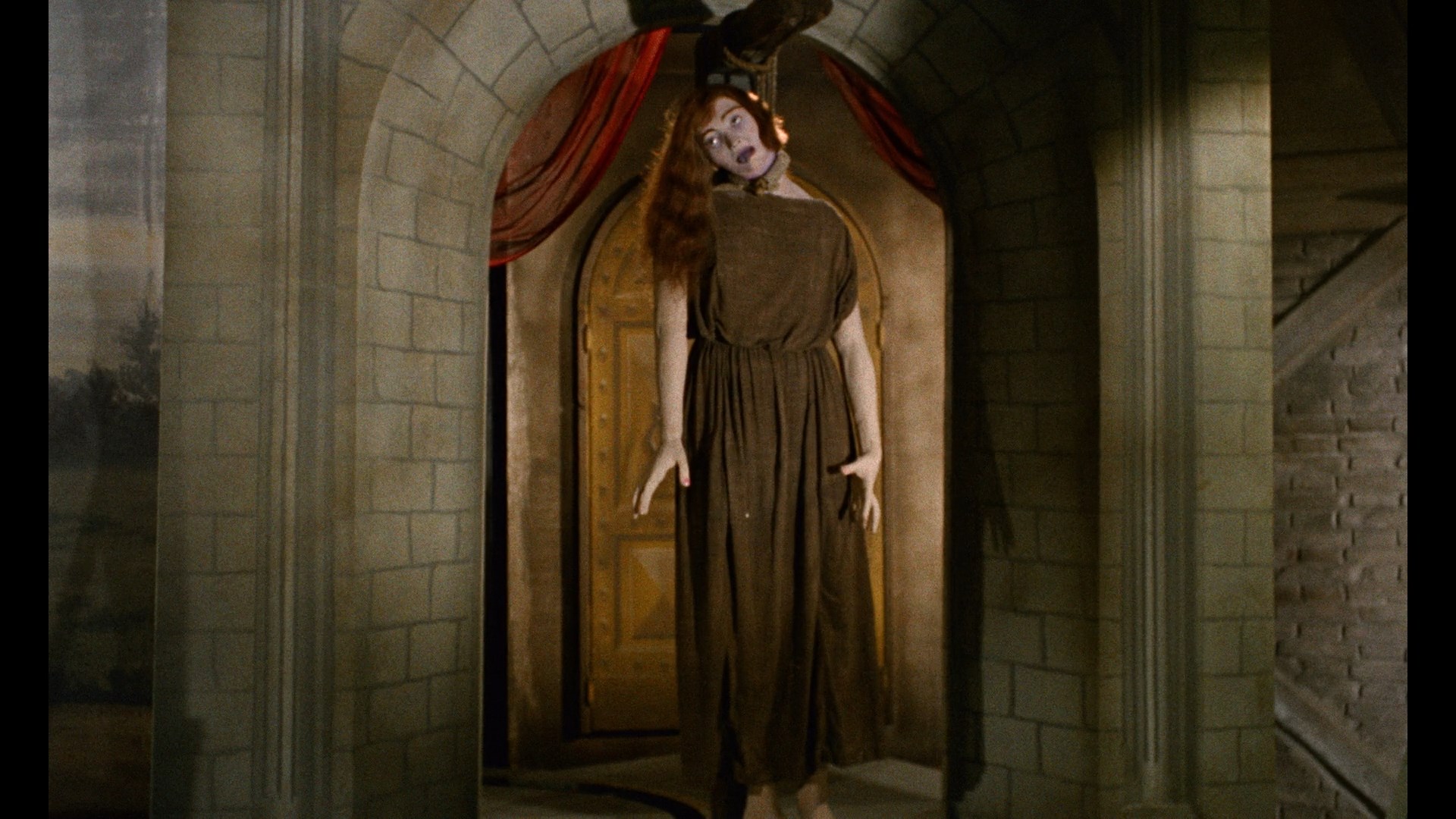 horror tale comes off like a mad, poetically filmed fusion of House of Wax and Eyes without a Face (not unlike Jess Franco's nearly contemporary The Awful Dr. Orlof). Less overt in its sex and violence than similar product streaming from Hammer Films and other Italian director, Mill of the Stone Women is a deliberately paced, visually startling treat finally presented on home video in a manner befitting its historic status.

In a remote, canal-lined Flemish village, Professor Wahl (Boehme) lives in a decaying windmill containing a peculiar local attraction: strangely lifelike wax figures representing famous historical figures and various gruesome historical tableaux. A new apprentice, Hans (Brice, Winnetou himself), arrives at the mill and is immediately bewitched by the dark, mysterious Elfi (Gabel), the professor's daughter. Further complicating matters is old flame Lisolette (Carrel), who's not happy about Hans' wandering attentions. When Hans tries to break away from Elfi, she seems stricken with grief and dies... but the mystery deepens when a drug administered by the professor sends Hans into a delusional 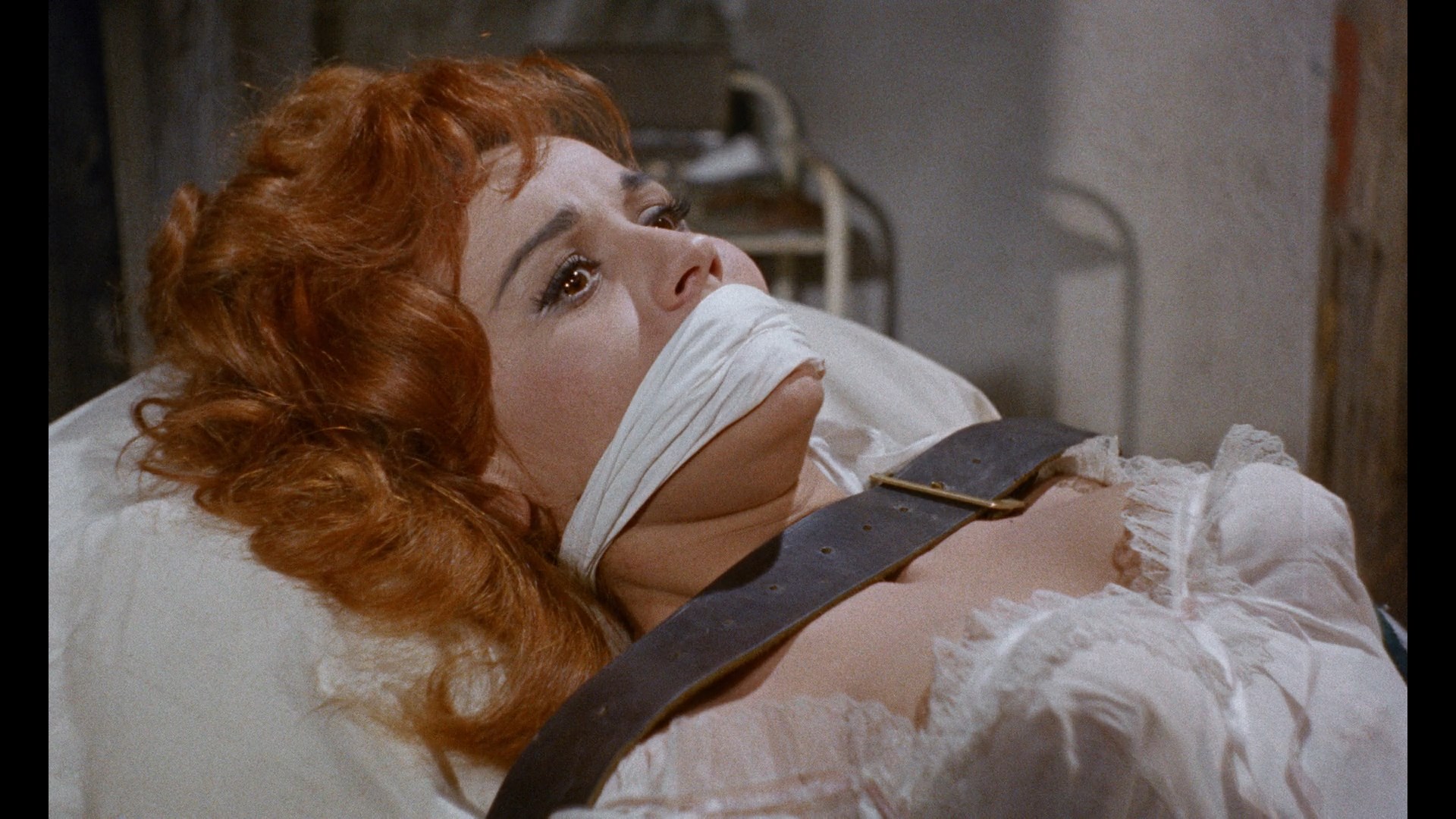 frenzy that may or may not point to a real-life macabre plot within the mill. 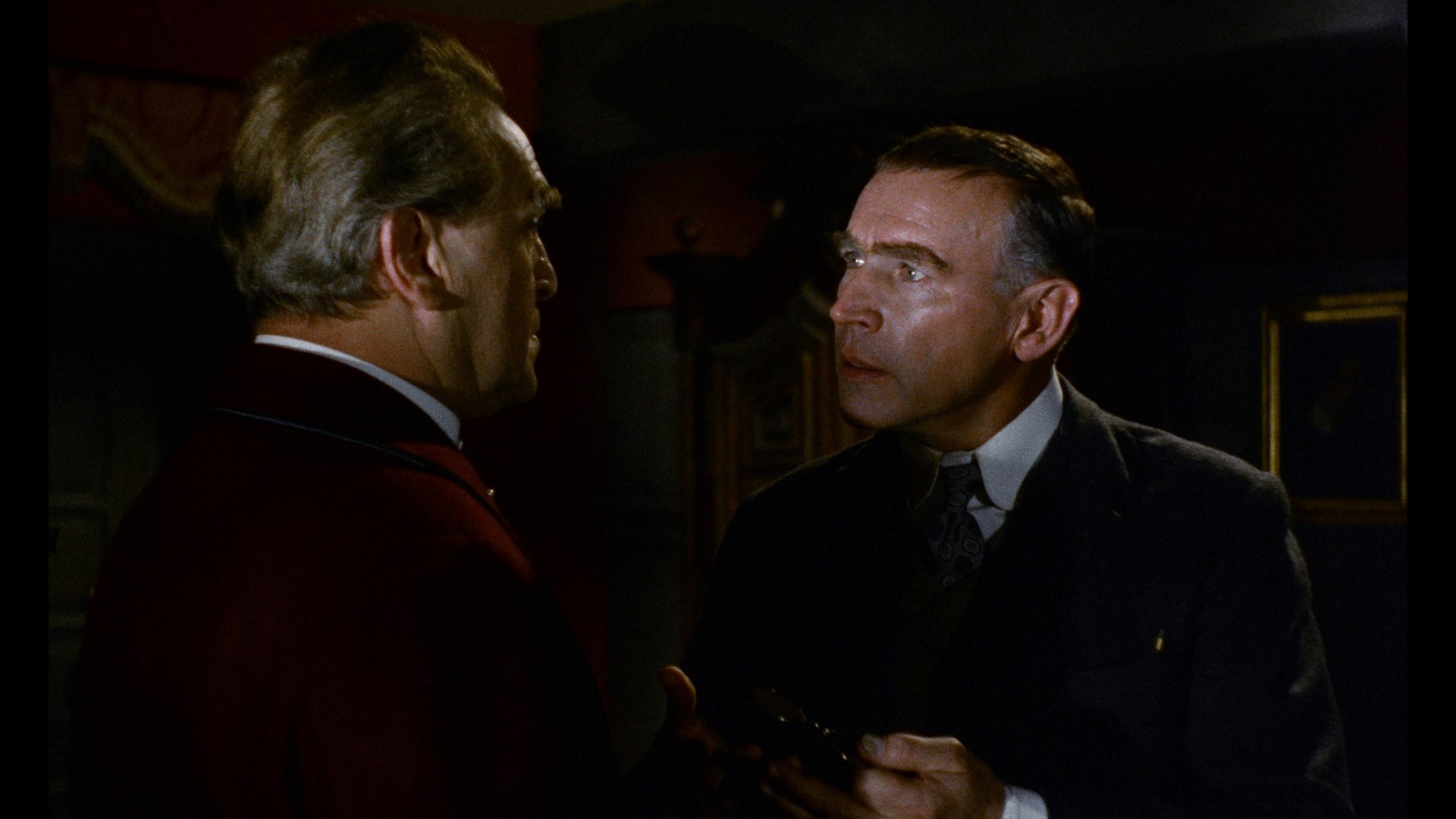 bowed the same year), Mill usually suffers in comparison thanks to its haphazard distribution history and the fact that director Giorgio Ferroni never explored the same territory since. While it lacks the seductive charge of Bava's similar treatment of the Catholic madonna/whore convention, Mill makes up for it with a subdued but powerful color scheme filled with eerie blues and reds. American audiences have rarely had a chance to appreciate the film on its best behavior, thanks to muddy prints and godawful video transfers that drown its fragile pastel hues in a dark, murky sludge. Thankfully better elements began to surface over the past few years, including a much-discussed airing in Australia (in French with English subtitles) that revived much interest in this oft-discussed but rarely seen gem.

Bringing the film to a much wider audience, Mondo Macabro's DVD sports an even better, anamorphically enhanced transfer that continued to boost the title's reputation. Though the somber pacing may put off fans expecting something along the lines of Black Sabbath, the more 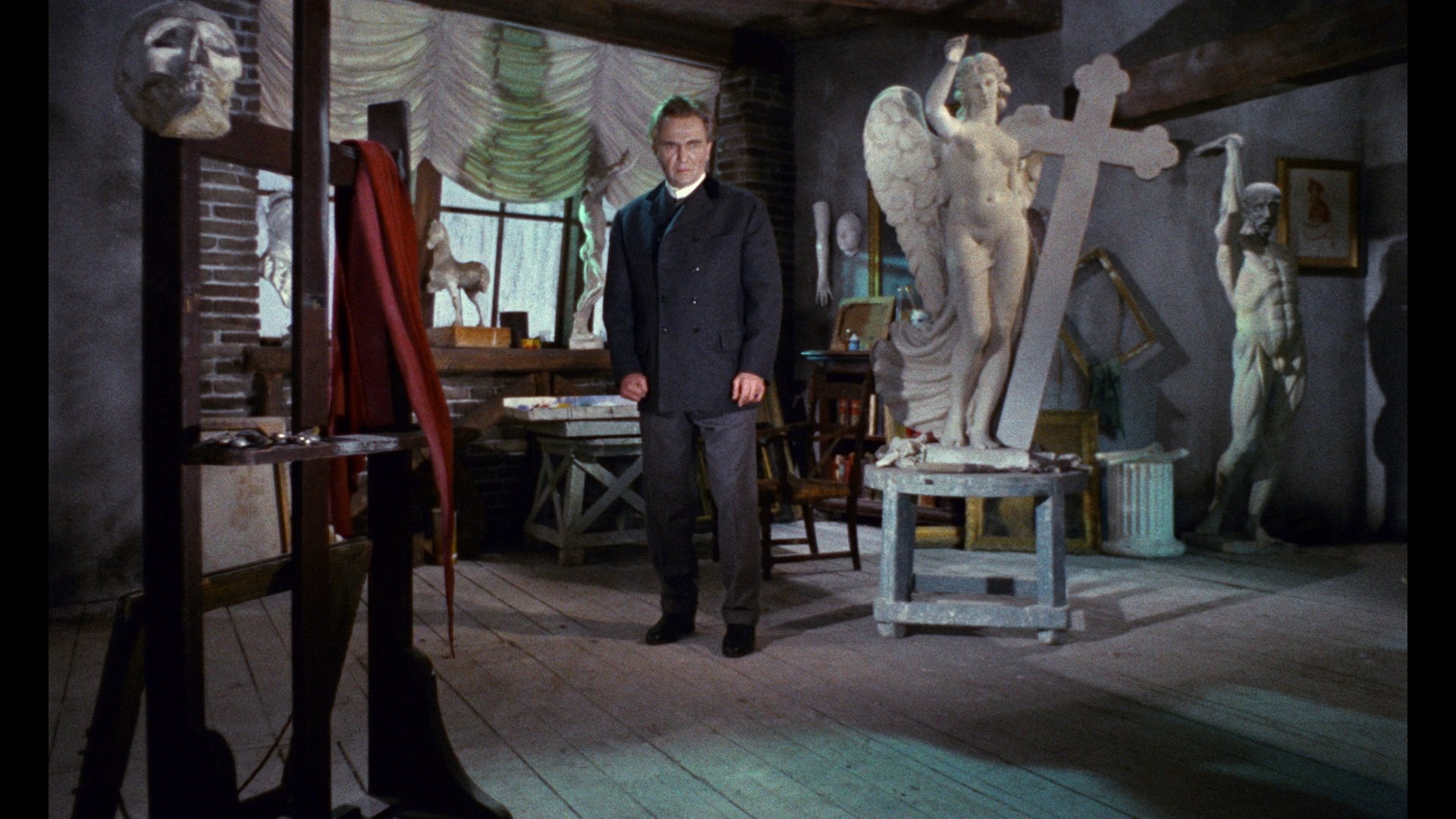 patient will be rewarded with a thoughtful, evocative combination of fairy tale logic and surgical terror. The disc also includes three language options, with optional English subtitles: the American dub 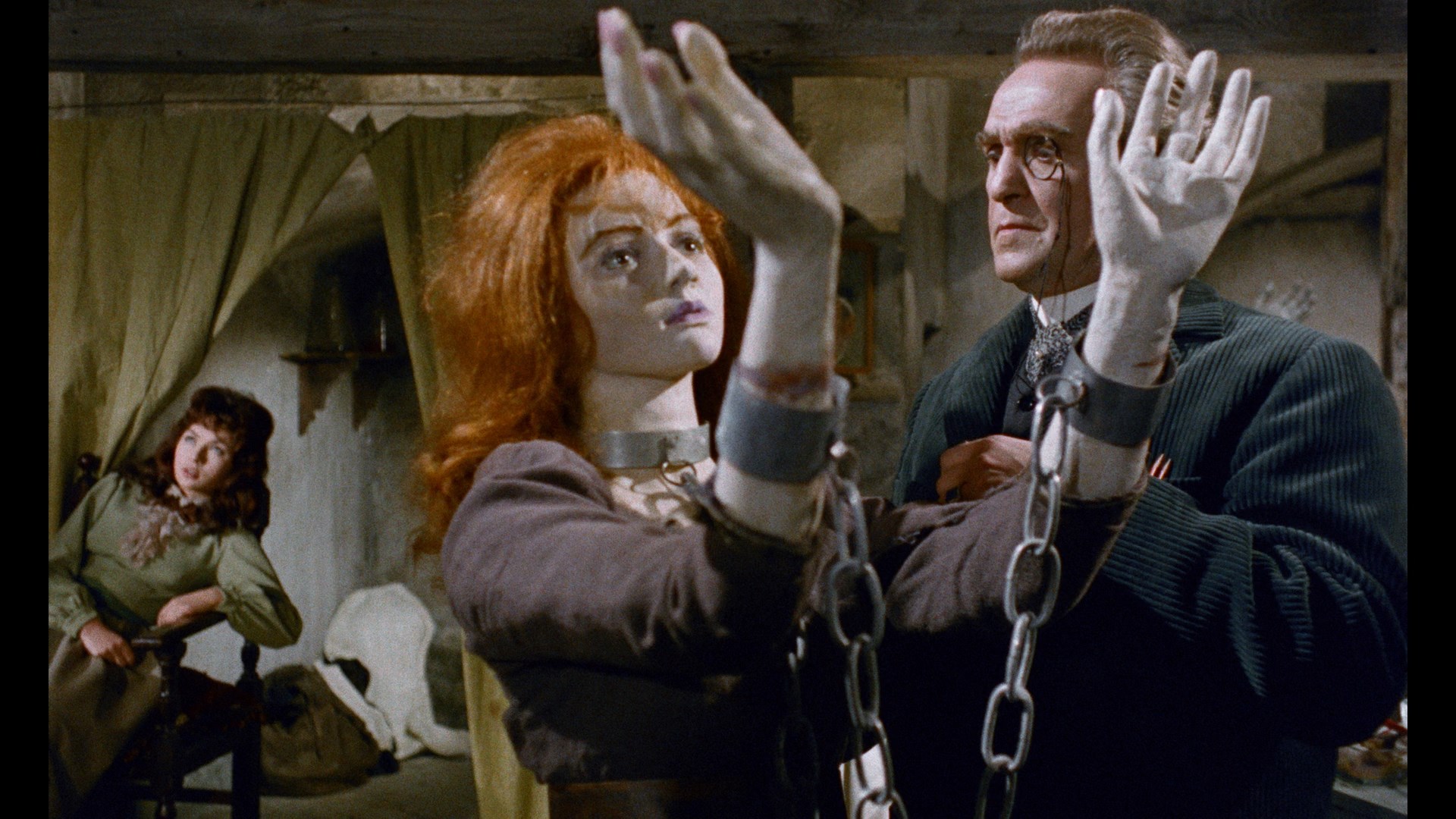 track (an awkward mess included for those accustomed to U.S. drive-in screenings and videos), the European English track (much better), and the relatively naturalistic French track (which lapses Anchor Bay-style into English for a couple of quick bits of dialogue). Extras include the alternate (and more aesthetically pleasing) French opening credits, an alternate cut of the hallucination/nightmare sequence, an American theatrical trailer (slightly squished for some reason), a gallery of promotional posters and artwork, typically thorough bios for the cast (including some decidedly bisque surprises), and appreciative comments by Mondo Macabro head Pete Tombs. The first pressing of this title exhibited problems at the layer change on some players, but a corrected pressing was quickly substituted.

In 2016, German label Subkultur bowed the film on Blu-ray in a limited and very pricey edition featuring the international version (with German and English audio options), the French cut (with German and French tracks), and the Italian cut (with German, English, and Italian audio), plus German subtitles for all options. Extras include a German-only audio commentary by Christoph Huber and Olaf Moller, an archival interview with Wolfgang Press (15m52) called "A Little Chat with Dr. Mabuse" looking back at his career complete with scrapbooks and thoughts about Otto Preminger and William Dieterle, the German and English trailers, 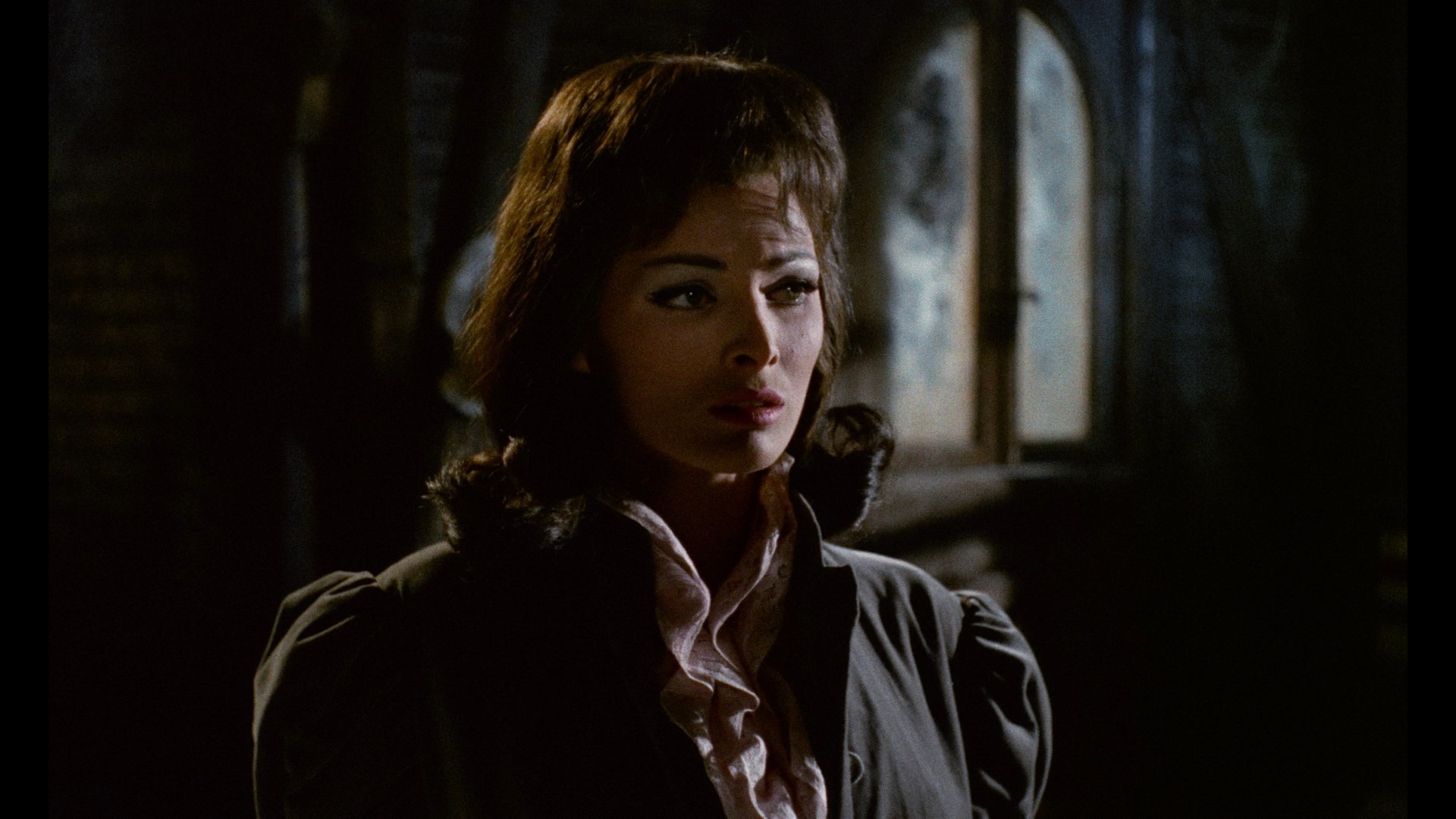 an incredibly battered German theatrical print transfer as a bonus (running 92m49s) with no other language options, and a hefty 12m28s gallery. The film itself looks okay here with much better 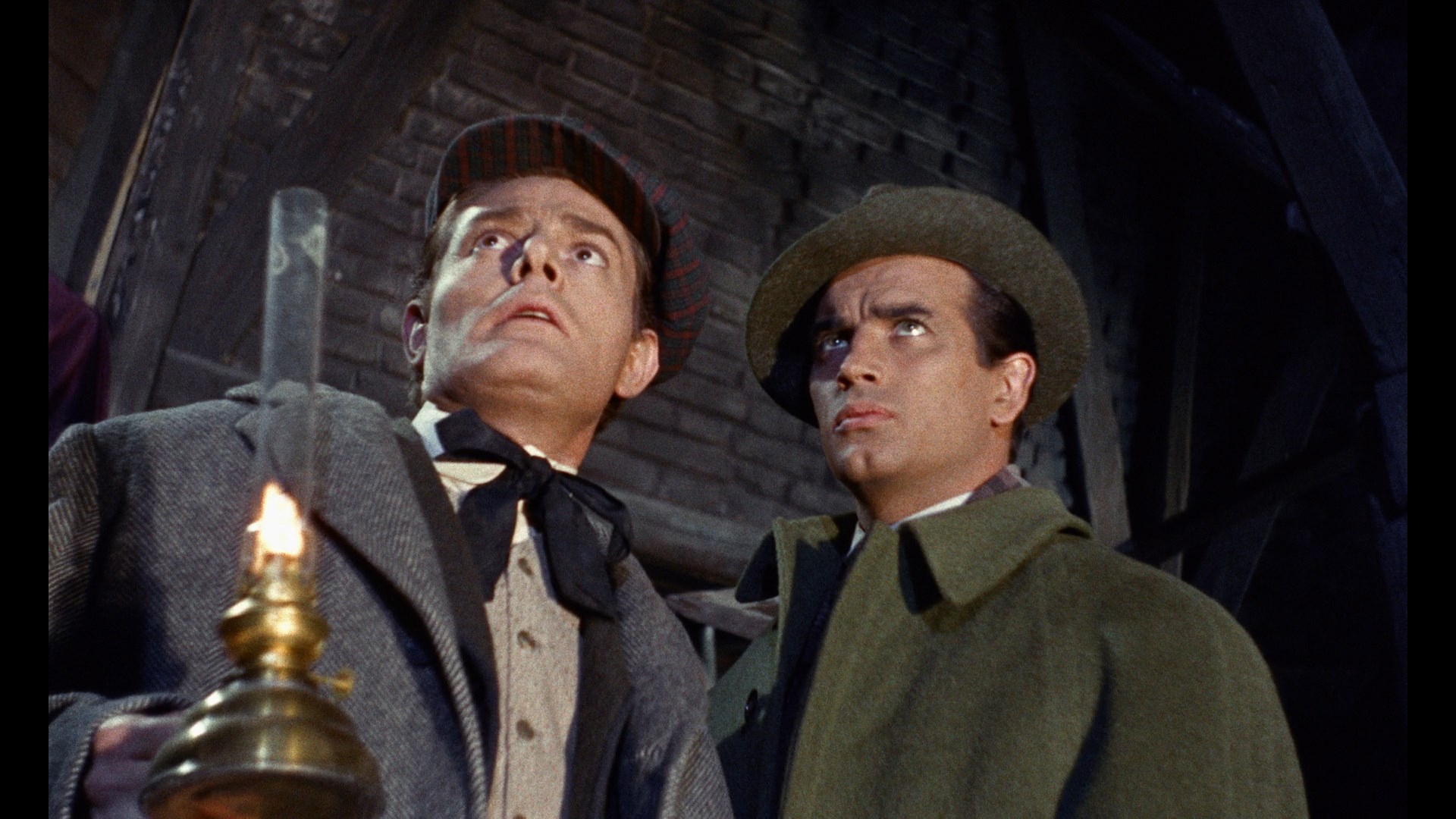 color timing than the earlier DVD (which is quite bluish by comparison), though detail is soft and it tends to look blown out at times.

In 2021, Arrow Video finally brought the film to Blu-ray in a far more accessible edition featuring a new 2K restoration that actually received a bit of festival play. The improvement here is extremely obvious with much finer detail throughout that brings out textures in wood, clothing, and hair that were completely muddy before. Colors are also better with the reds and blues in particular looking more nuanced and defined. The framing varies slightly by comparison throughout, sometimes showing marginally more or less than the earlier release by a sliver on the edges. Here you also get the best of all possible worlds for this film spread out over two discs starting with the Italian version (95m36s) and English export version (95m37s) with seamless branching offering their respective credit sequences on disc one. Either way it's the longest and most preferable presentation of the film, complete with a dash of partial nudity missing from many export prints. It's a real treat watching the Italian version out officially with (newly translated) English subtitles, and both sound great with LPCM mono tracks. The English version also comes with optional English SDH subs. A new audio commentary by Tim Lucas is a fitting choice as he gets to integrate his extensive research into the golden age of Italian horror and European genre literature into a study in the film's synthesis of macabre motifs that had been threading through continental popular culture for years. It's also a great way to appreciate this film's pivotal stance in the history of Italian horror, essentially laying the groundwork for both color and monochrome terrors that would soon be unleashed. In the intriguing video essay "Mill of the Stone Women & The Gothic Body" (24m10s), Kat Ellinger plunges into the recurring imagery of petrified bodies and their connection to the 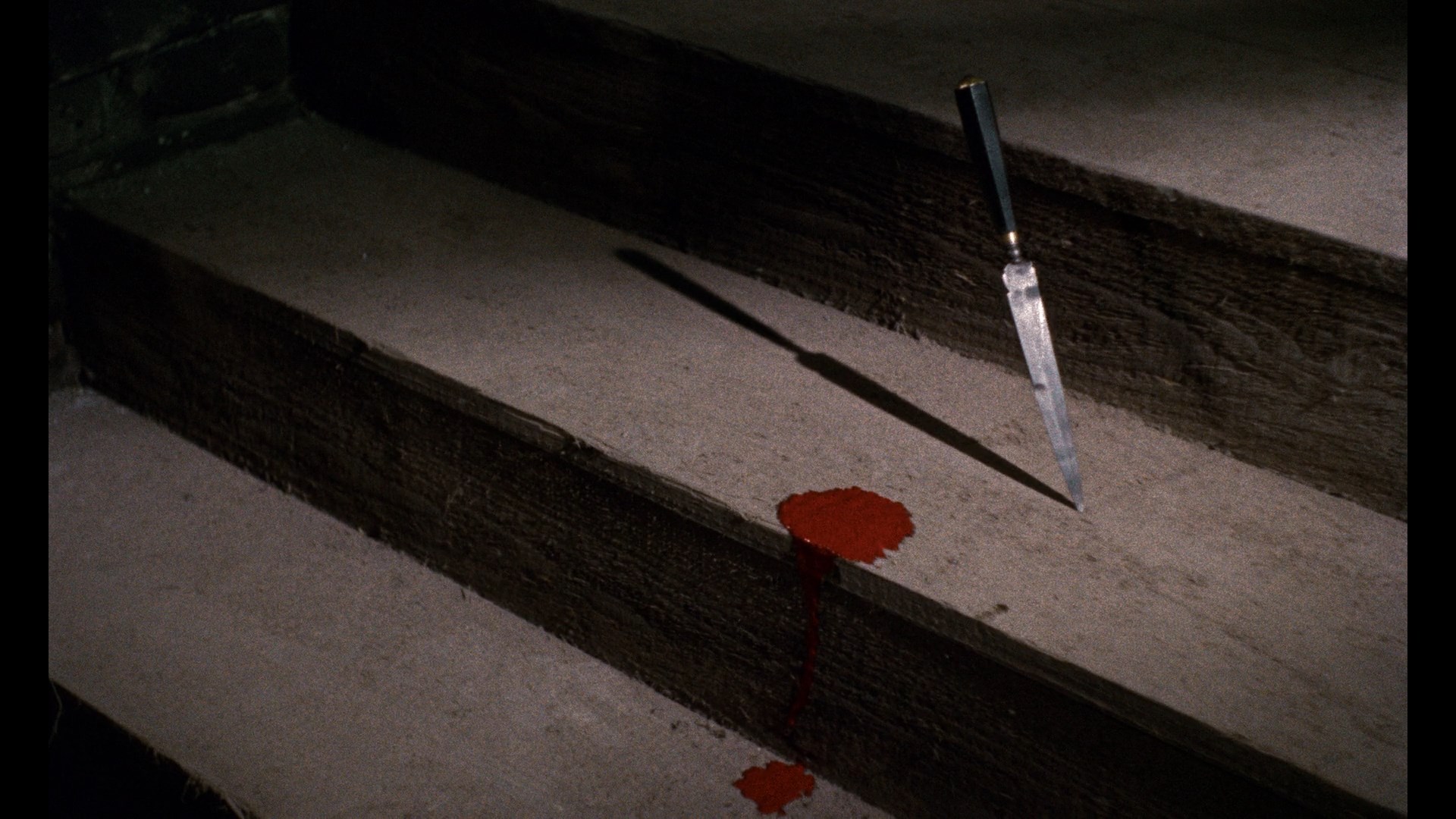 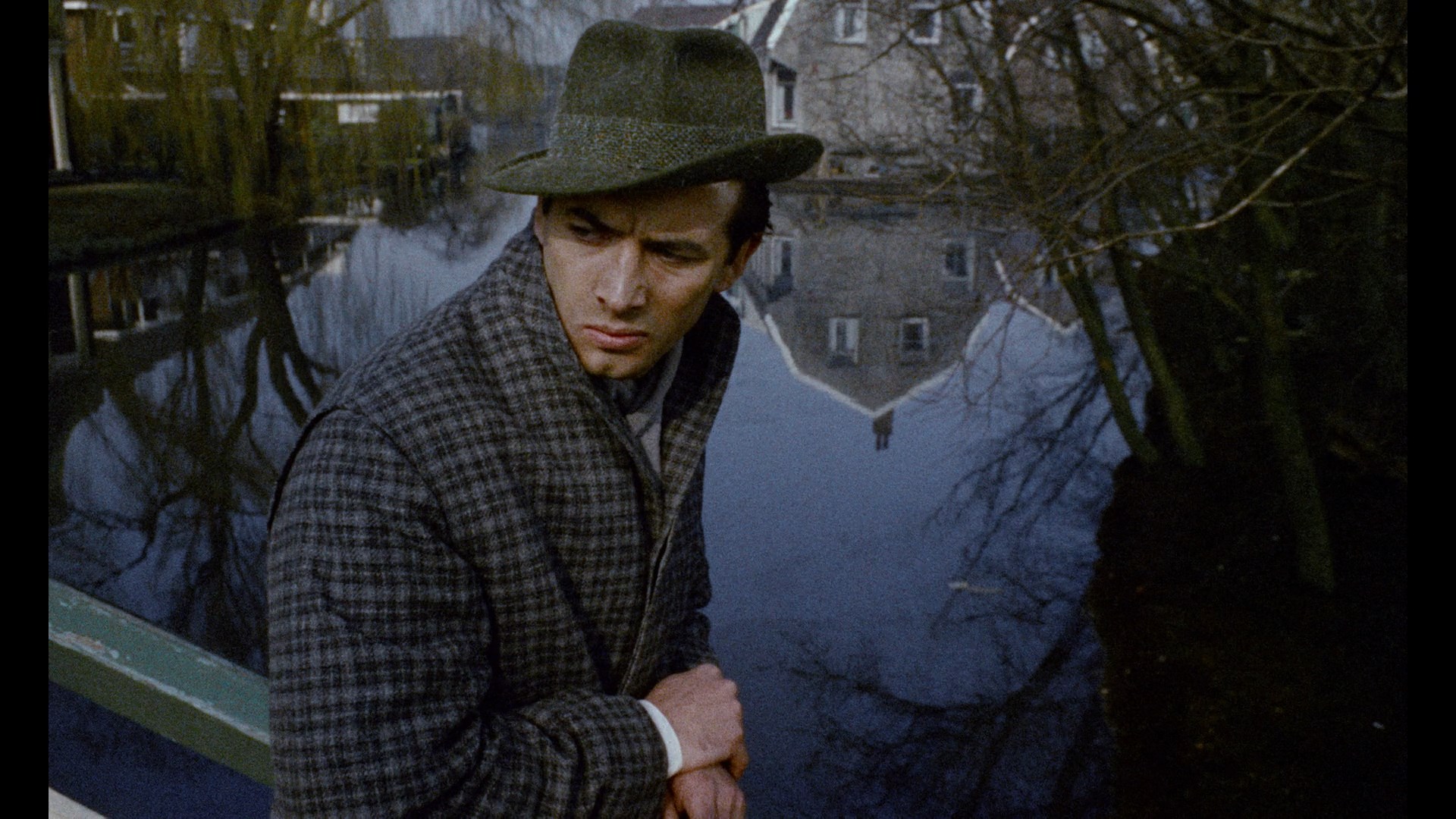 with beautiful corpses, part of a larger literary and cultural obsession linked to voyeurism and victimization. "Turn to Stone" (27m7s) features archival interviews with actress Liana Orfei and film historian Fabio Melelli, with the former talking about her career to that point and singing in French with her own voice while the latter goes into the director's working methods and approach to actors, as well as his one other genre film, the excellent The Night of the Devils. The Preiss interview from the German disc is ported over as well, followed by the rare U.K. alternate main titles as Drops of Blood from a frequently run print, the German titles, the U.S. and German trailers, and separate galleries for posters, stills and lobby cards, and the German and U.S. pressbooks.

In the initial limited edition (which features reversible sleeve art including a new design by Adam Rabalais), there's also a second Blu-ray featuring the French version (89m51s), which has optional translated English subtitles and is in similarly perfect shape apart from some minor hairline scratches over the main titles, and the U.S. version (94m29s) with that clunky American dub complete with narration (plus English SDH subs). The limited edition also comes with a booklet featuring an essay by Roberto Curti, a rundown of the various versions by Brad Stevens, and contemporary review excerpts, plus a fold-out, double-sided poster and six double-sided, postcard-sized lobby card artcards. 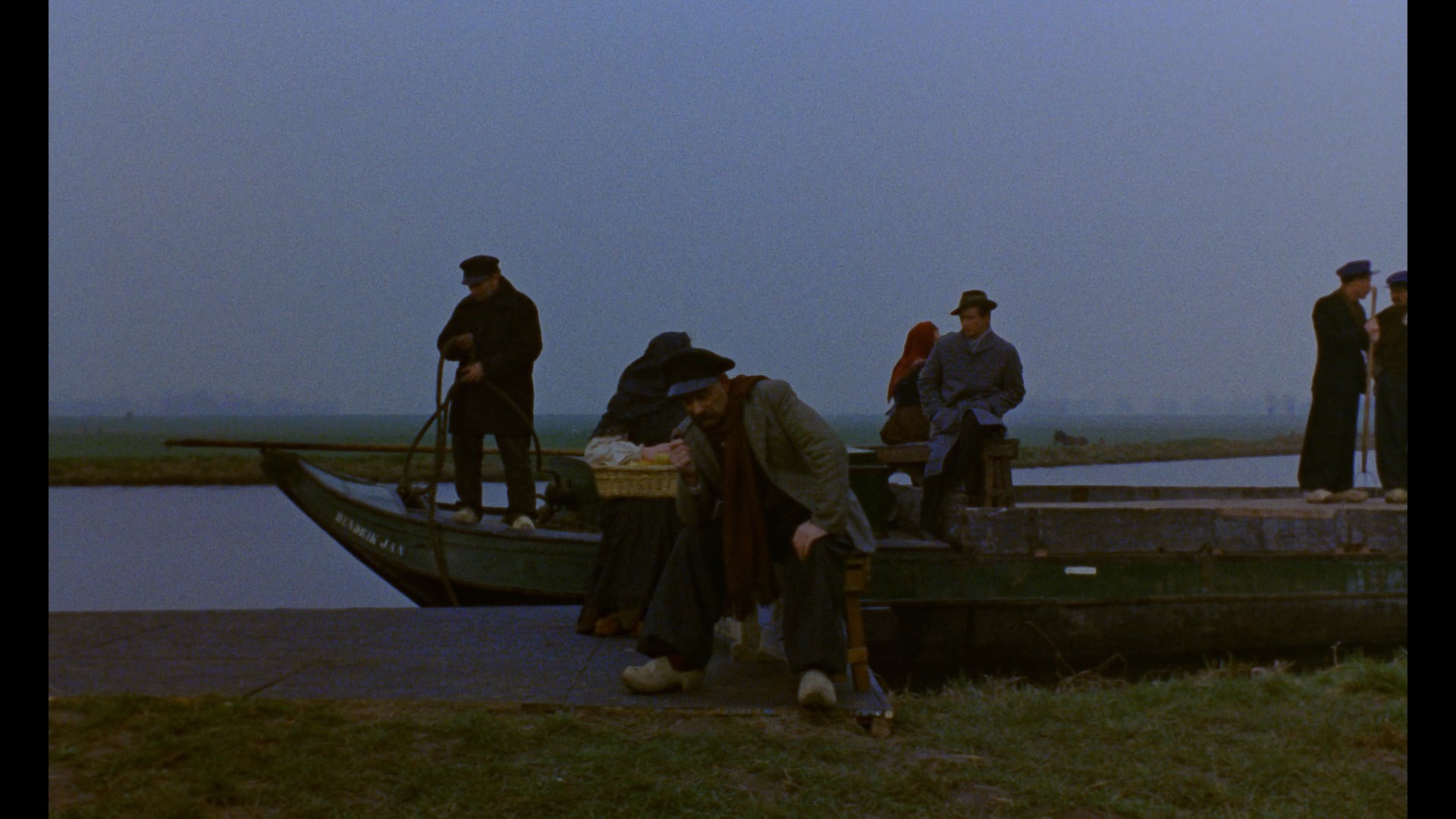 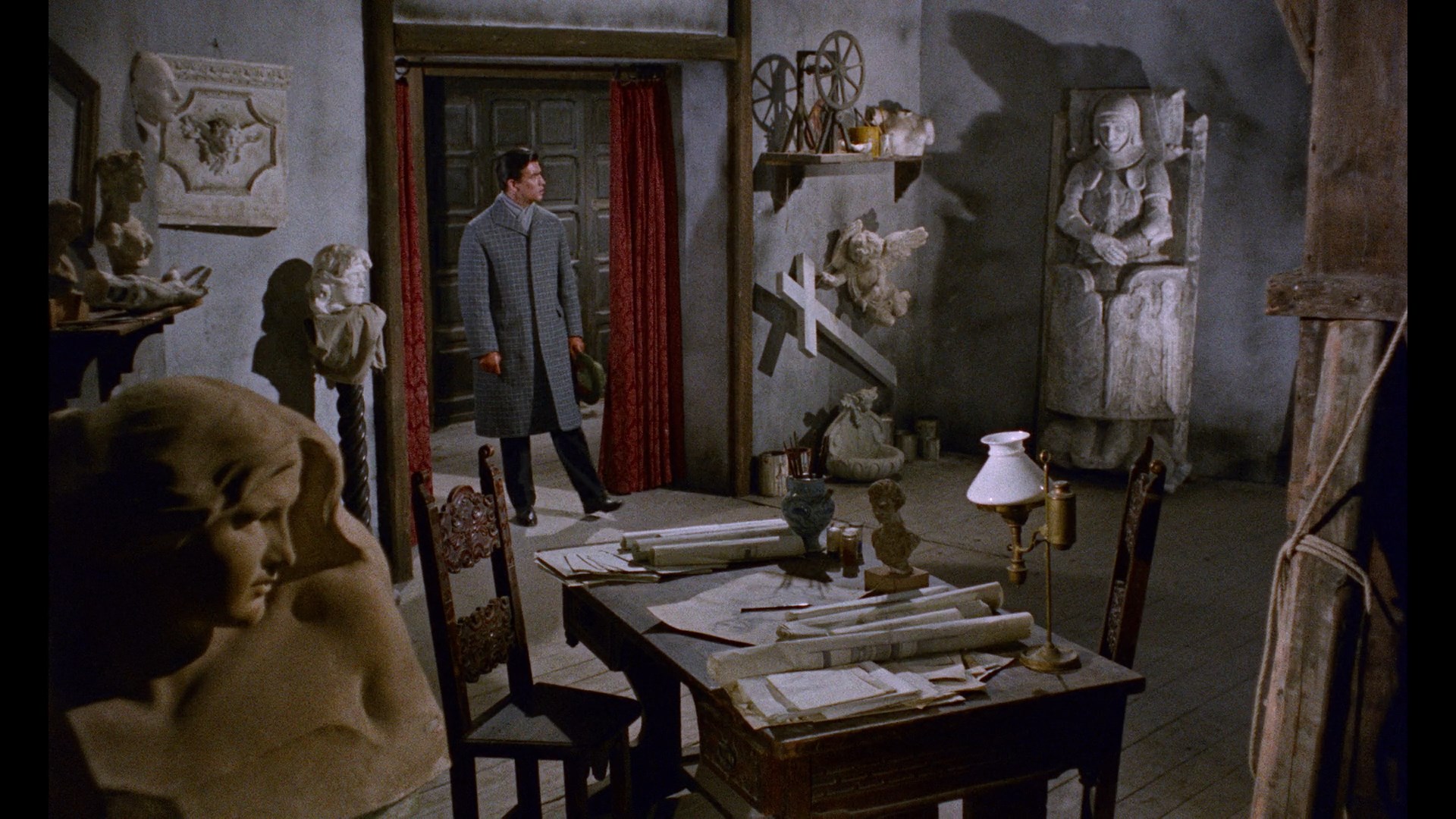 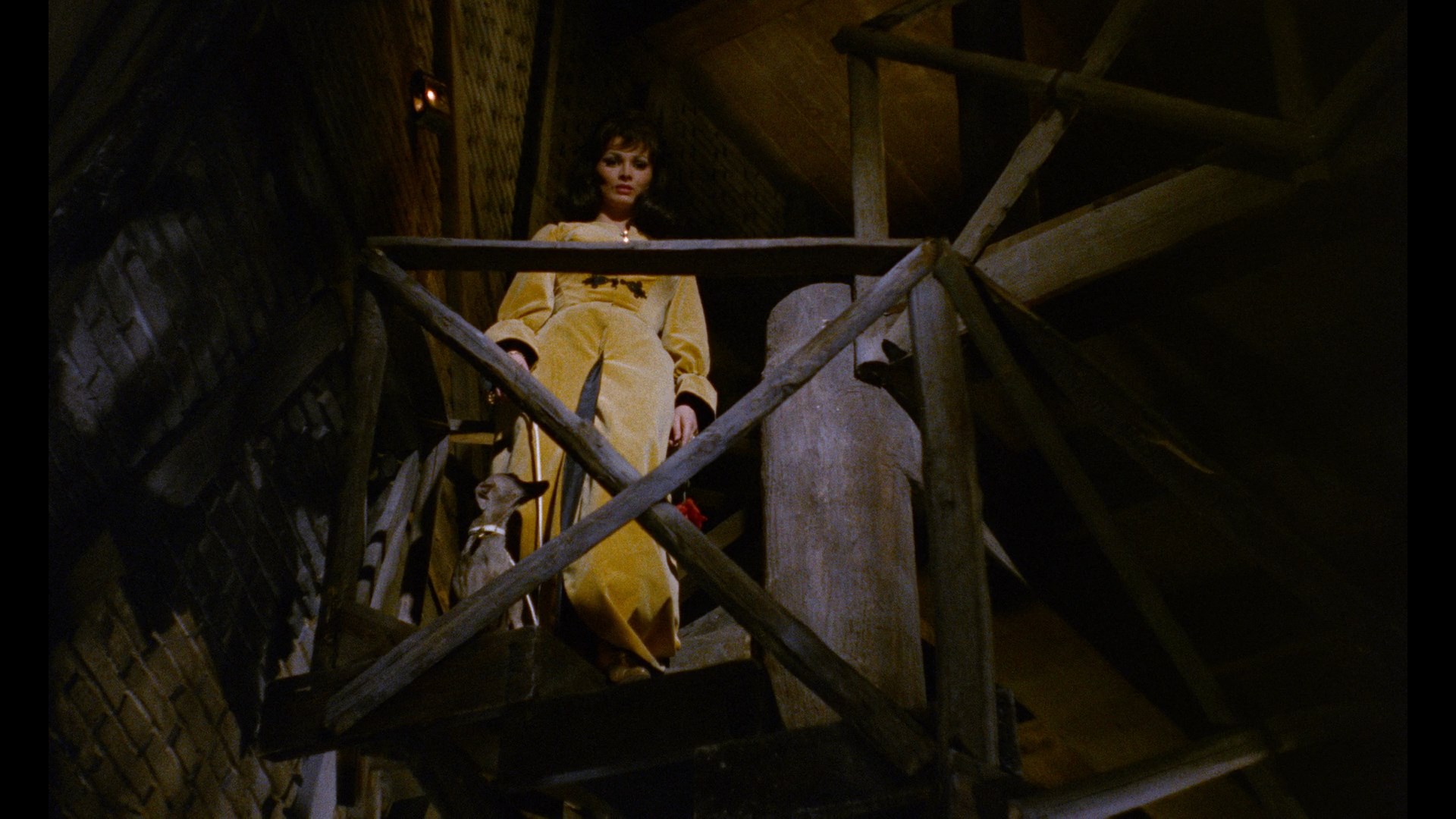 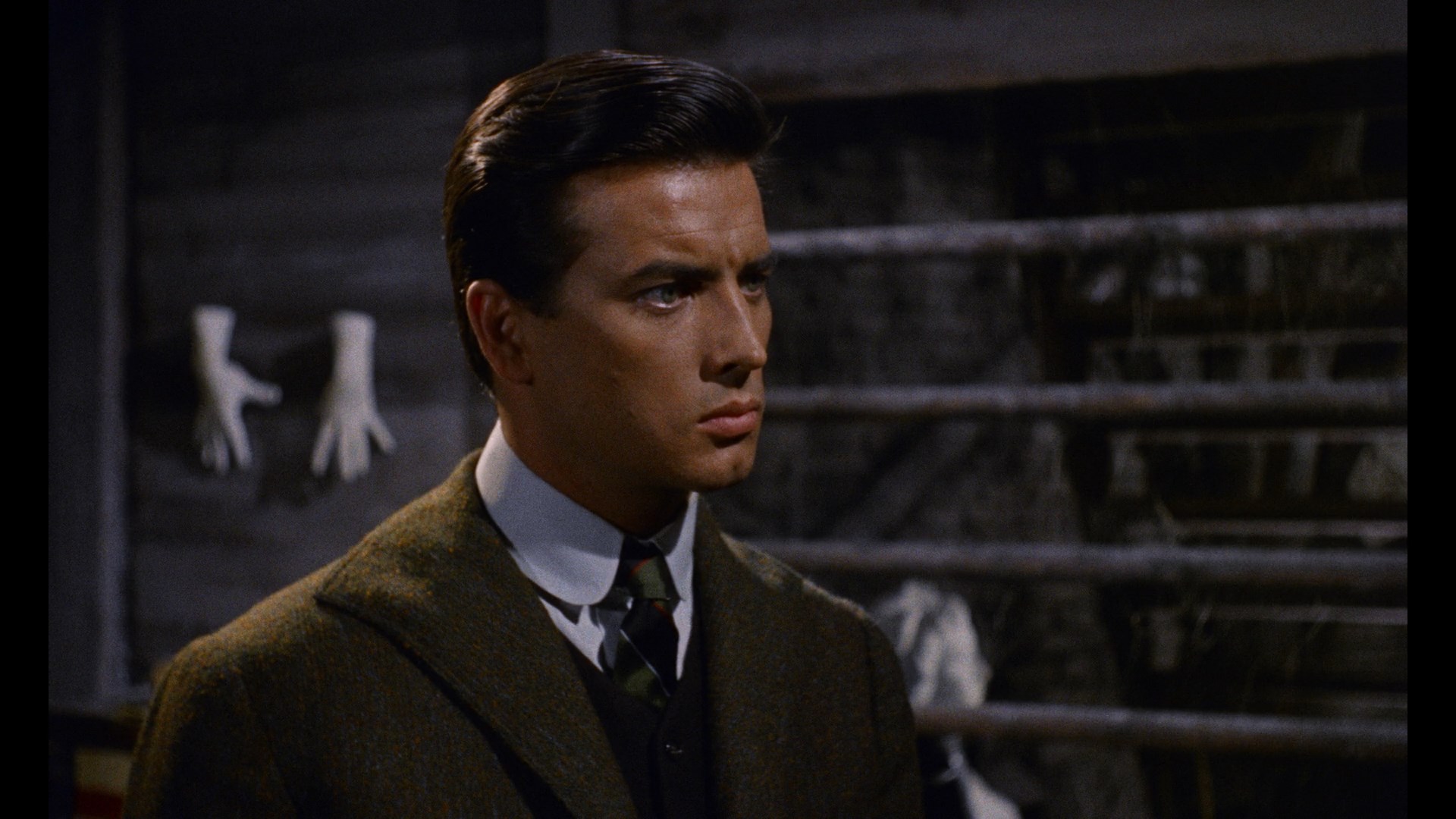 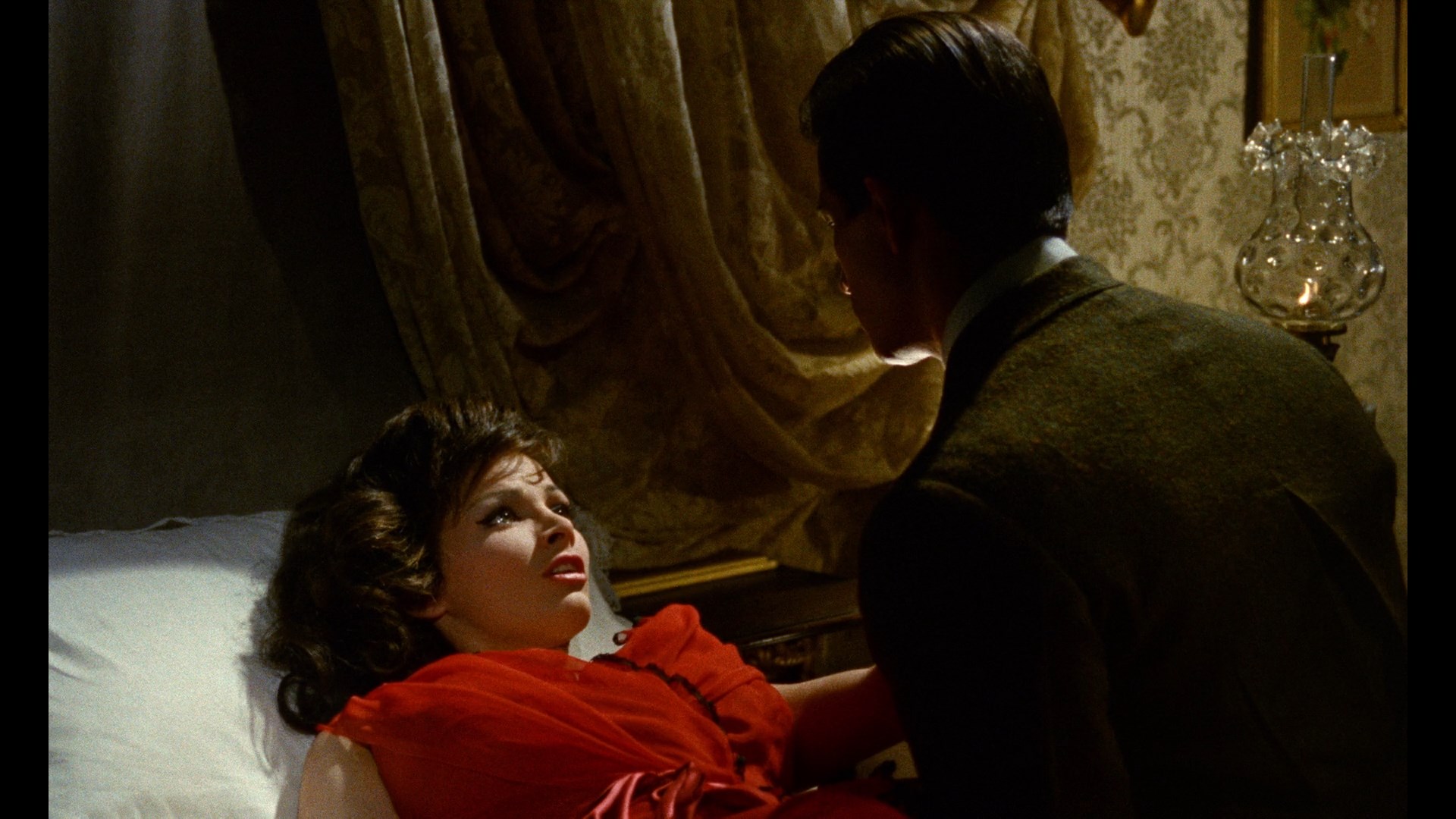 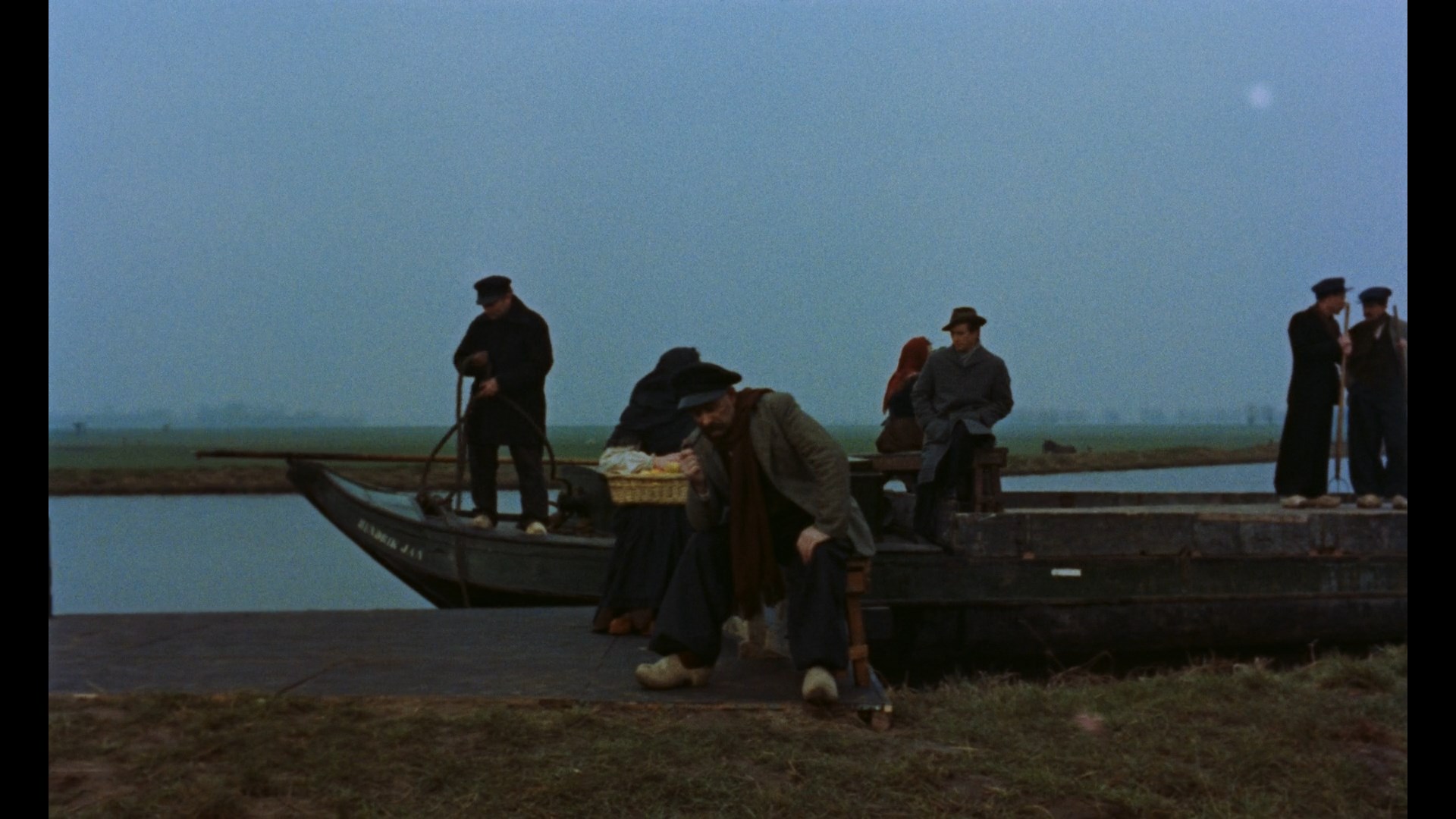 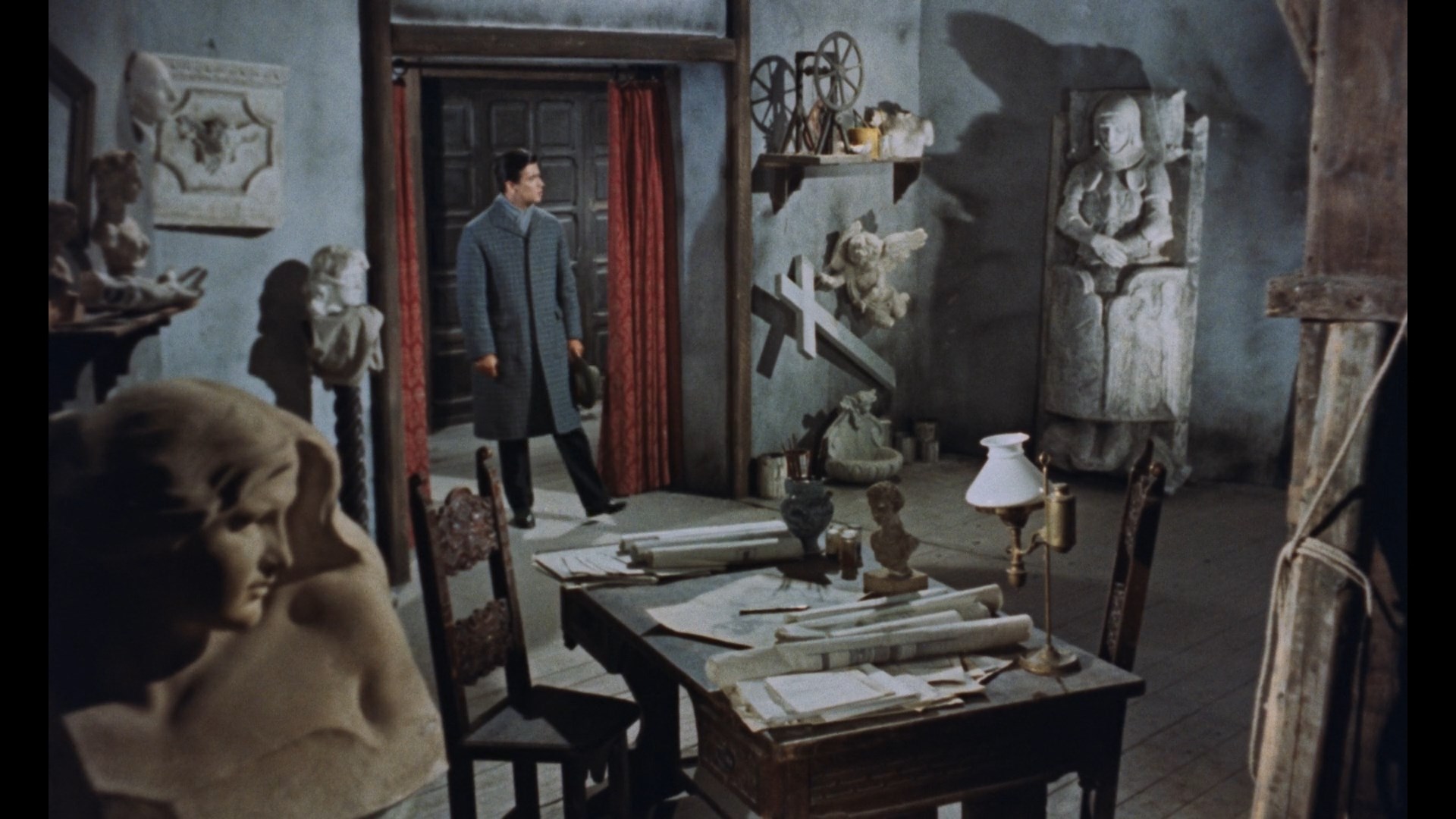 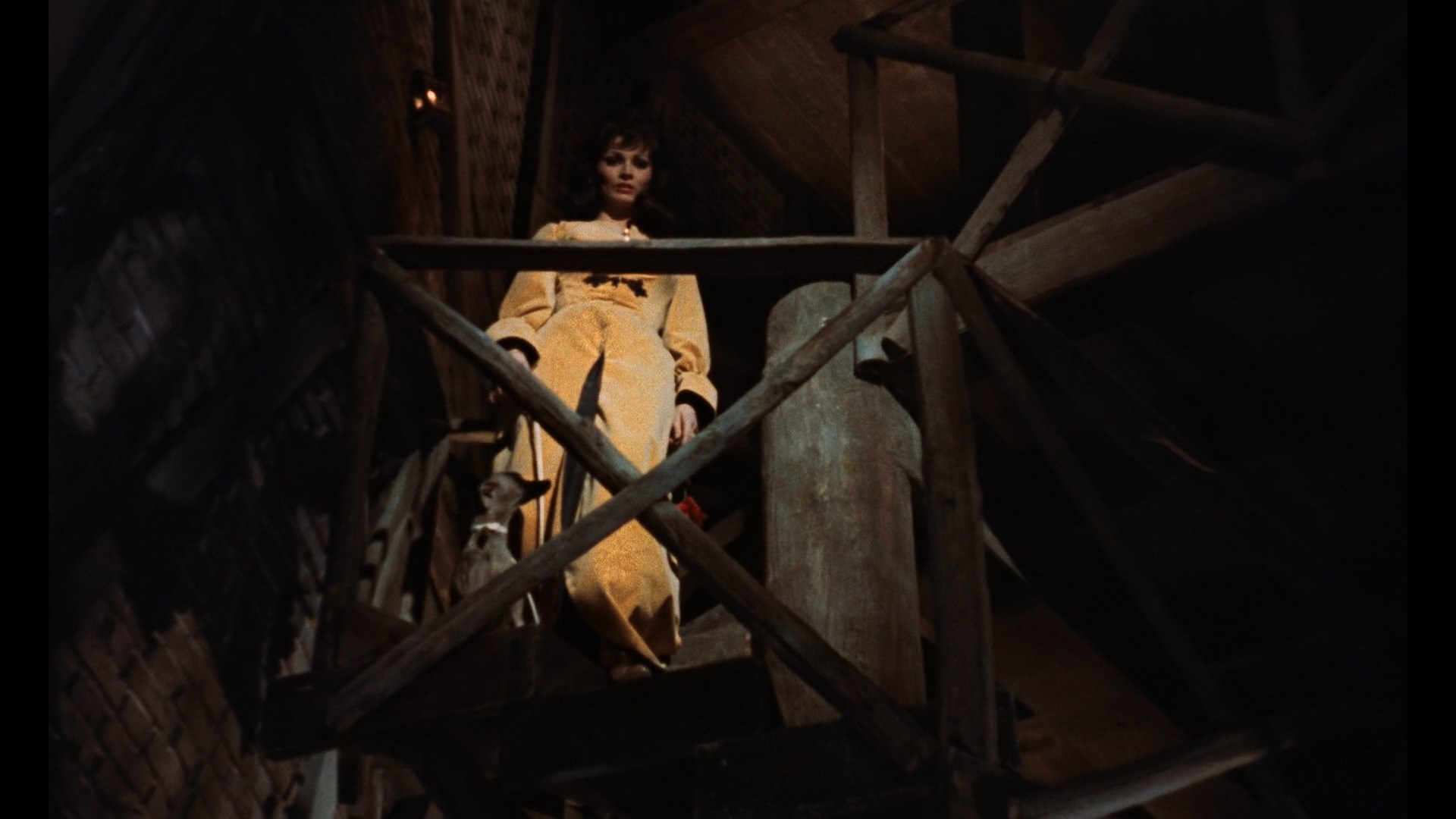 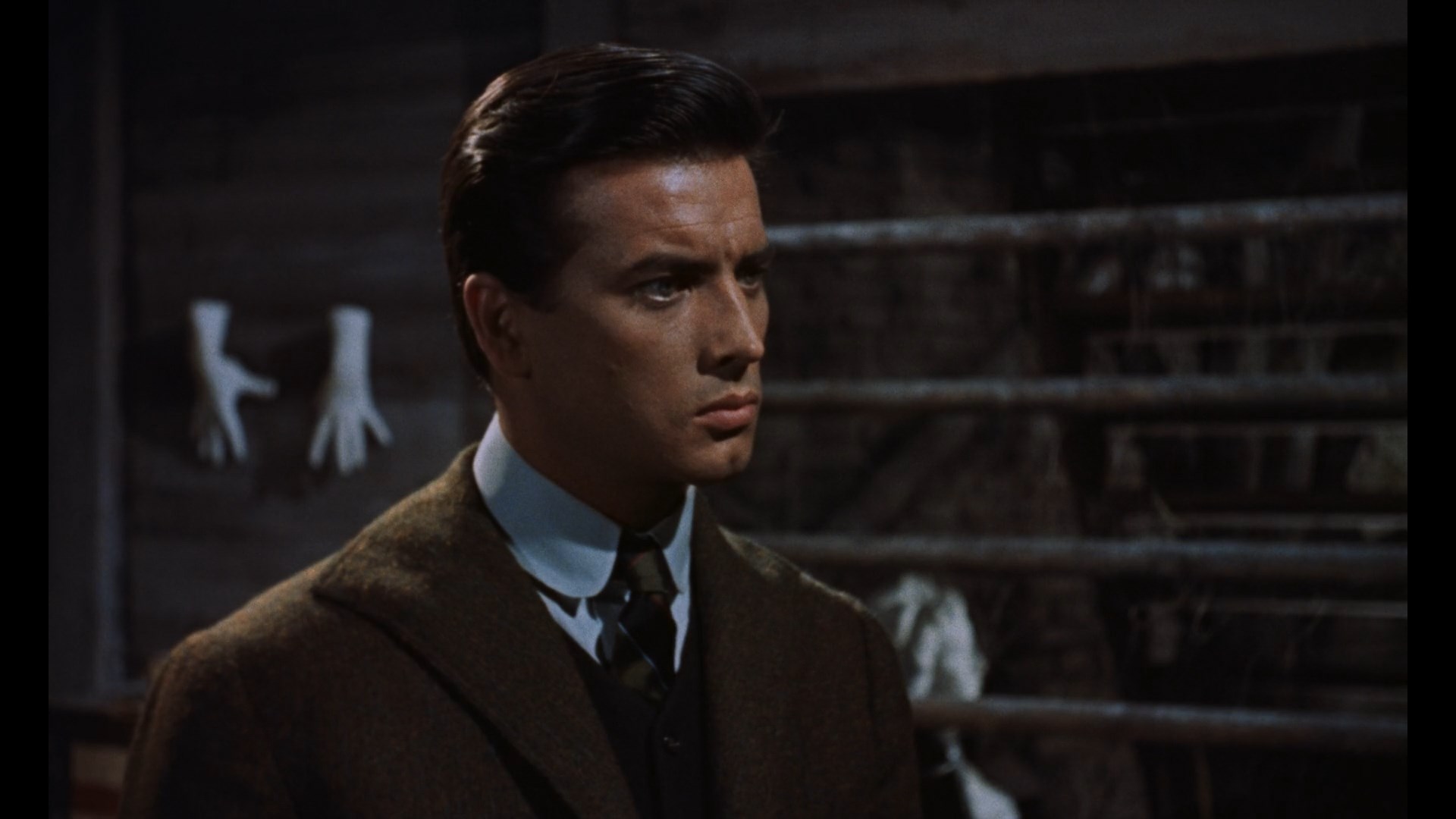 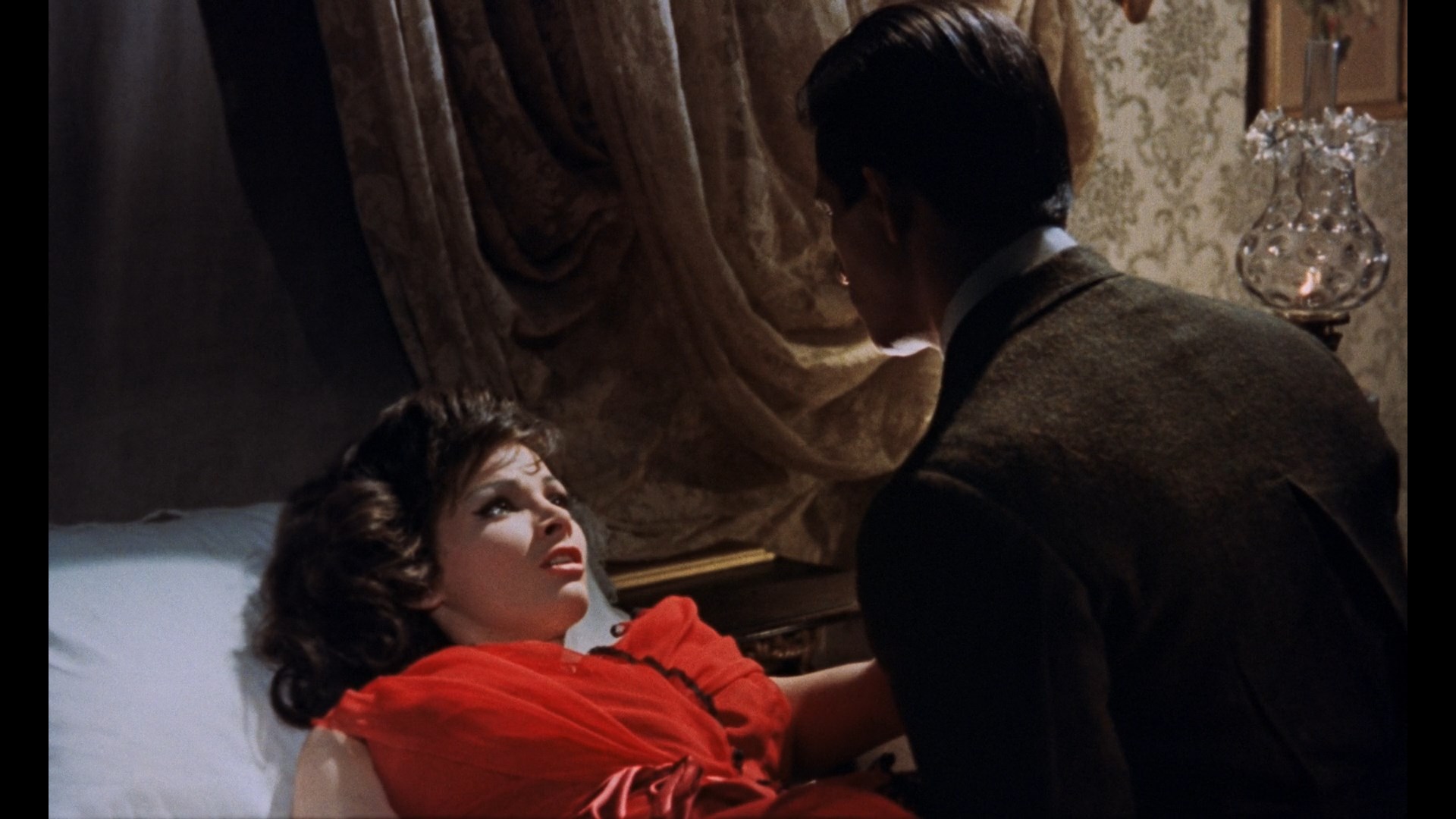 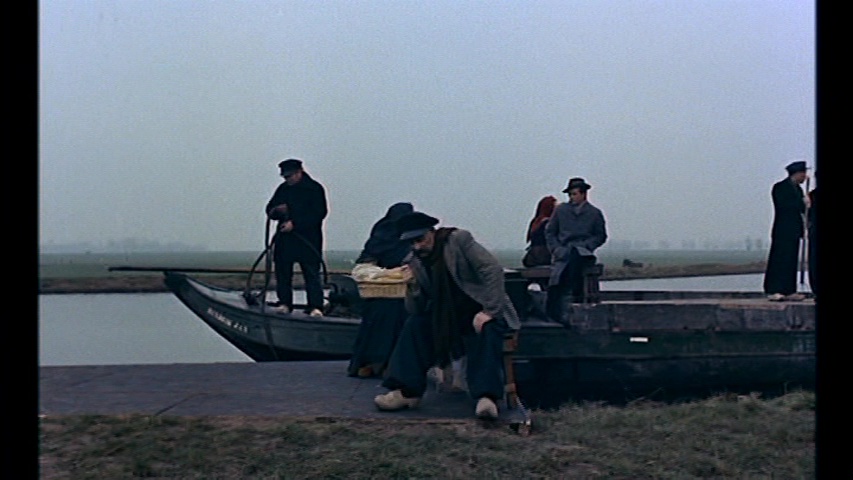 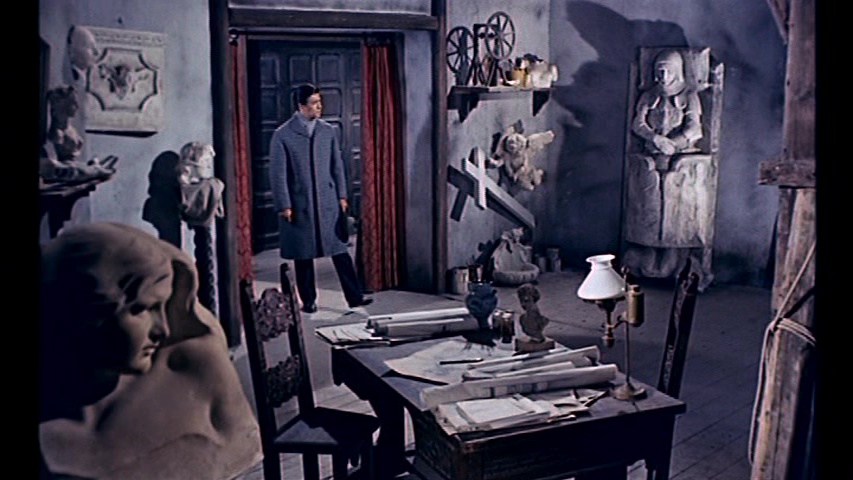 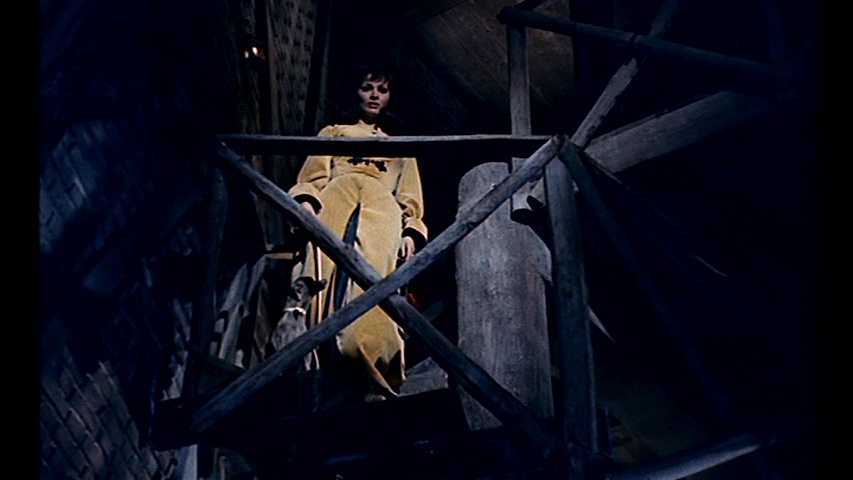 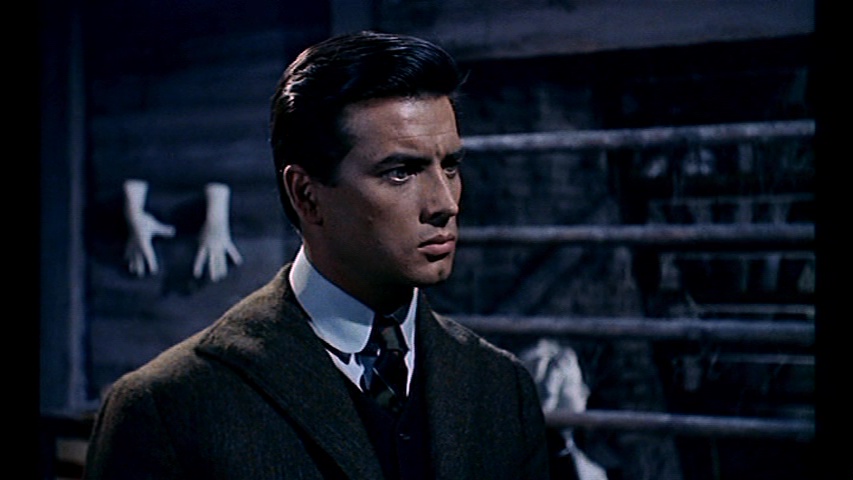 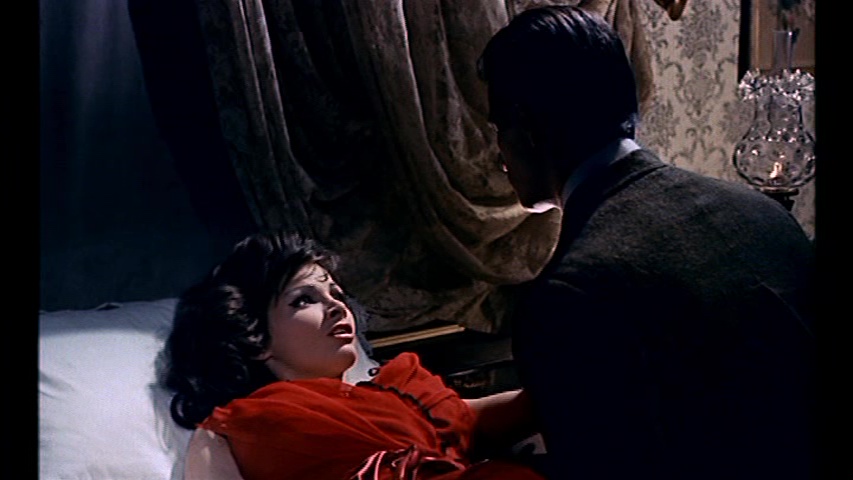