Back in the days when VCRs were first getting a footheld in American homes and 42nd Street was still a huge tub of sin, Al Goldstein of Screw magazine 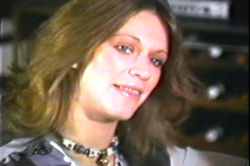 unleashed a public access show on late night Big Apple viewers that managed to cover the hardcore scene with only a sporadic emphasis on the explicit details but heavy helpings of scuzzy weirdness. Under its "After Midnight" banner, Blue Underground manages to capture this weird TV anomaly in all its glory with an ongoing series devoted to presenting as much of the program's charming highlights as is legally possible. 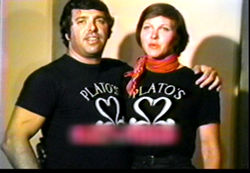 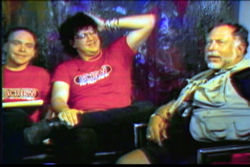 look at the unique genital skills of "Veri Knotty," and a promiscuous boast by Tara Alexander.

Though it sounds incredibly juicy, Midnight Blue's Celebrities Edition is a far more uneven affair, offering a mixed bag of celeb-related interviews with mostly teasing footage of some scandalous skeletons in the closets of the rich and famous. The candid and usually very raunchy interview footage here with the likes of Debbie Harry and Chris Stein, Penn and Teller, O.J. Simpson, Arnold Schwarzenegger, Buck Henry, Al Lewis(!) talking about his rear-entry mirror fantasies, Tiny Tim, Russ Meyer, R. Crumb, and Gilbert Gottfried are priceless reminders of how much fun TV used to be before publicists took over and spoiled the party. However, bootleg video hounds should hang on to their copies of celebs doing the nasty; while you do get a few bits 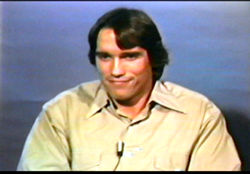 and pieces of the "Barbra Streisand" stag film (though whether it's really her has yet to be determined and she denies it to this day), it's heavily censored and barely worth the trouble. Also, the lengthy Rob Lowe homemade sex tape and the jaw-dropping Go-Gos backstage (where they torment a drunk, naked male groupie) are presented only briefly with most of the weirdest moments sadly MIA. Too bad Belinda Carlisle's stoned-out monologues in the same tape weren't included here, as they definitely deserve to be preserved for digital posterity; also, the unnamed groupie's pitiful attempts at self-arousal before the rocker chicks are pretty much censored into oblivion. Fortunately these debits are compensated with the presence of Goldstein himself, who offers some hilarious and wildly profane rants against a host of celebrities who have raised his ire, all enhanced with the usual array of dirty commercials for New York's underground sex scene. Also included is a thoroughly whacked-out featurette, "Al's Adventures on Demoral," in which he stumbles around while intercut with footage of Linnea Quigley from Silent Night, Deadly Night. Hey, it's unique.