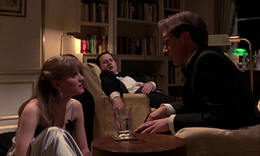 One of the first and most unexpected films of the indie movie renaissance of the 1990s was this unassuming but surprisingly resonant look at the lives of young New Yorkers shortly after the yuppie boom of the previous decade, which turned out to be the first of a trilogy of young adult-oriented '90s films from director Whit 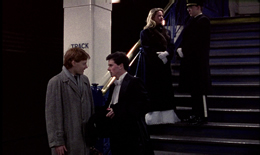 Stillman (followed by Barcelona and Last Days of Disco).

While walking outside one night in a rented tux, lower class Tom (Clements) is impulsively swept into a cab by a group of privileged Park Avenue college-age socialites back home for Christmas. It turns out Tom was one of the many boyfriends of one of their cohorts, Serena, and they spend a late evening together talking about everything from literature to their collapsing social status. The next day a girl named Audrey (Farina) who's become smitten with Tom arranges to bring him back into the fold by having him escort her to another party, while the lives of everyone else continue to intersect in unexpected ways as they prepare for debutante time.

Written by Stillman over a four-year period in the latter half of the '80s and financed partially by selling his apartment (which ranks up there with Hollywood Shuffle getting its budget from lots of credit cards), Metropolitan proved to be not only an unexpected art house hit but, as time has proven, extremely influential as well. Critics at the time likened this to Woody Allen, but now it feels closer to the adolescent, urbane cinematic worlds of Wes Anderson, Noah Baumbach, Donnie Darko, and Garden State, among many others, while its striking gold-and-copp 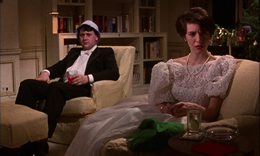 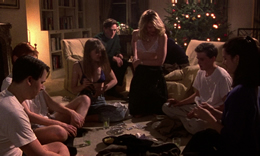 hat connection isn't as unlikely as it might seem; in the commentary for Last Days of Disco, Stillman explains that Kubrick was an enthusiastic fan and thought Barcelona represented a new kind of cinema. All of the actors (most of theme appearing for the first time) deliver excellent performances, though the one who really sticks in the memory is Chris Eigeman as the jaded, quick-witted Nick; it's a real star turn that ensured roles in the next two Stillman films as well as several other films and TV shows.

Shot with mostly low-key lighting with very warm color tones, Metropolitan proved to be something of a nightmare for early video technicians as its broadcast, VHS, and laserdisc incarnations all looked like a dark, dull, muddy mess. Salvation eventually arrived in 2006 when Criterion released a far more attractive version on DVD, complete with extras which were carried over to the even better 2012 Blu-Ray. The HD transfer looks about as sparkling as this film stock will allow; some of the night scenes have the coarse look you'd expect for something shot on Super 16, but the bulk of it looks terrific with a natural level of grain and excellent color reproduction. It's a real joy to watch if you love that '90s New York indie look, which this represents to a tee.

Stillman, Eigeman, actor Taylor Nichols, and editor Christopher Tellefsen reunite for a solid audio commentary, with Stillman generally ringleading it as they talk about the casting process, their own life experience impacting on the film, and elaboration on some of the more arcane subjects broaching in the Oscar-nominated screenplay. Also included is a lengthy reel of outtakes and deleted scenes in workprint condition, plus an "Alternate Casting" selection of glimpses of actors in different roles from the ones they wound up playing in the finished film (including a very different take on Nick). Finally the original US trailer is included (from a '90s tape master for all you nostaligists out there), while the liner notes booklet has an overview of the production and some bits of trivia by writer Luc Sante. A really wonderful film that just seems to get better and better with age (not to mention eerily prescient in its take on an upper class about to be taken down by an economic crash), this is definitely one to savor.