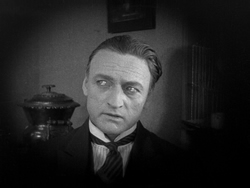 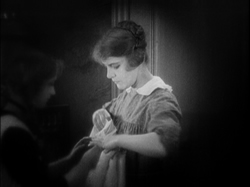 to surprise today, as the Danish-born director managed to find drama in the most unexpected places. Sandwiched in between his daring 1925 film Michael and his undisputed 1928 masterpiece, The Passsion of Joan of Arc, he decided to adapt a modest domestic play by Svend Rindom. The result, Master of the House, is the textbook definition of a quiet classic, an unassuming but potent study of a family's change in dynamics conveyed through careful performances and nuanced gestures.

In a scenario that still strikes a chord in today's frenzy of layoffs and corporate downsizing, family head Victor (Meyer) vents his frustrations out on his long-suffering wife, Ida (Holm), when his watchmaking business goes belly up. Their domestic routine becomes an escalating series of strains on their marriage until she finally decides to put him in his place thanks to the aid of their crafty nanny (Nielsen).

While Dreyer is best known for using extended close ups and piercing performances to explore religion and heightened emotion, the approach here is a bit different. Meyer in particular makes for a unique main character (who isn't quite a protagonist or antagonist) whose actions could have made him purely repugnant in lesser hands; instead what unfolds here is a delicate balancing act that manages to sustain itself beautifully for nearly tow hours, offering a more intricate commentary on the nuclear family than most Hollywood films could manages decades later.

Despite Dreyer's reputation, Master of the House has been strangely neglected in America outside of a handful of repertory screenings and TV airings. A BFI DVD several years ago was a workable solution for completists despite the ragged condition of the 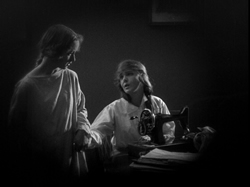 source material, but the 2014 Criterion dual-format release (containing a Blu-ray and DVD) is a significant improvement. The source material is generally in excellent shape and runs at the more pleasing speed of 29.97 fps versus the previous 25, and contrast and detail get a significant boost, too. The newly recorded Gillian B. Anderson reconstruction of the original Danish score is superb as well, featuring pianist Sara Davis Buechner. The original Danish title card has been retained, while the intertitles are newly translated.

A 15-minute interview with Danish film historian Casper Tybjerg goes into great detail about Dreyer's career and the source play, focusing in particular on the adaptation process and its rewarding study of "the importance of the little things." He also discusses some fascinating footage shot for the film showing Victor at work, represented here by existing stills, which was never included in the final cut. A longer 22-minute visual essay by David Bordwell features a verbal walk through accompanied by stills, clips and artwork covering the techniques of the silent era adopted by Dreyer as he pushed th envelope in each film throughout the silent era. Finally the set rounds out with a booklet containing an essay by Mark Le Fanu offers a useful introduction to the film, pointing some of its subtle merits that might otherwise go unnoticed.