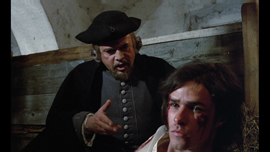 A perfect example of how showmanship 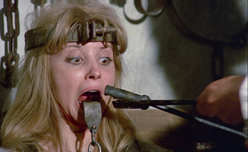 can make or break a film is Mark of the Devil, one of the clearest demonstrations that the gloves were coming off for horror films in the 1970s. Kept in heavy rotation for years, this one earned a mint with its outrageous campaign offering vomit bags to patrons and advertising a rating of "V" for violence, which left the MPAA distinctly unamused. Fortunately the film itself delivered exactly what it promised, a shocking catalog of atrocities mounted against a lush, antiquated Austrian setting with a storyline that upped the sex and violence factor of the already harsh Witchfinder General tenfold.

In the midst of the sleaziest chapter of his career next to 99 Women and Dorian Gray, Herbert Lom stars as Lord Cumberland, a dogged witch hunter whose impotence has him unleashing his frustration on the local populace. Burnings at the stake, torture on the rack, and other fiendish punishments are the order of the day, with his young apprentice Christian (Kier) at first believing the Lord's statement that he wants confessions, "not corpses." All that begins to change when Christian begins to fall for one accused witch, Vanessa (Vuco), and begins to see the atrocities as an excuse to swipe valuables and land from the aristocracy. However, Christian's moral awakening may come at a steep, very bloody price.

Though you won't find too many mentions of this one in the film history books, Mark of the Devil is a crucial chapter in the history of exploitation cinema as it managed to deliver extreme material in the context of an historical, deeply pessimistic story. There's no question that both Witchfinder General and The Devils are greater cinematic achievements, but this one is still difficult to shake off as it presents an utterly compromised world in which innocence has little value, money will just get you killed, and almost anything can be seized under the guise of the church. The film was officially directed by Michael Armstrong, an English filmmaker responsible for the proto-slasher film The Haunted House of Horror, but conflict arose when actor-turned-director Adrian Hoven (who had just produced three Jess Franco films including Succubus) appointed himself assistant director and called the shots on many scenes involving German-speaking actors

and extras. Witchfinder's director, Michael Reeves, had been intended to work on this film, but after his death that film's assistant director, Armstrong, was commissioned instead. The result was a famously conflicted shoot with the actors all offering their own accounts, and the most notorious casualty was the original ending in which a major character's death is followed with a supernatural twist in which bodies rise up out of the ground. While stills of this scene survive, the footage itself was destroyed by Hoven and is now irretrievably lost.

Another major factor in the film's continuing appeal is its wild cast, with the imposing Lom getting solid support from a very young Kier in one of his earliest roles. Of course, he would go on to have a very busy decade in films like Flesh for Frankenstein, House on Straw Hill, Suspiria, and Story of O. Austrian-born Reggie Nalder, whose burn-scarred face made him an indelible character actor in films like The Bird with the Crystal Plumage, Dracula Sucks, and the miniseries Salem's Lot, has a field day here as the vicious torturer Albino, and in a similarly nasty role is German movie veteran Herbert Fux from Woyzeck and Lady Frankenstein. Also on hand as the young persecuted baron is pop singer and softcore staple Michael Maien, and the film's most legendary scene (involving a tongue extraction) is handled by Gaby Fuchs from Werewolf Shadow and Grimm's Fairy Tales for Adults.

Oddly enough, the film's most divisive aspect among horror fans is actually its aggressive music score by pop composer Michael Holm, which alternates a sugary sweet main theme with jarring, distorted horror accompaniment and rollicking folk melodies. That's a crazy patchwork of tunes to be sure, but it really works well where it counts.

Mark of the Devil debuted on DVD from Anchor Bay in a lifeless, non-anamorphic presentation in 1998 with zero extras, but at least it was uncut. Blue Underground improved things substantially with its DVD reissue in 2004, which features a much better anamorphic transfer and a welcome slate of extras. Chief among them is an audio commentary with director Michael Armstrong and moderator Jonathan Sothcott covering all the bases: his antagonistic relationship with Hoven, the historical details of real witch persecutions, his lack of involvement in post-production, and his belief going in that this wasn't a horror film. Also included are the English trailer, three radio spots, a poster and stills gallery, and four cast video interviews: Udo Kier (10 minutes, including stills and discussion of the missing finale as well as a frank discussion of the troubled production), a very articulate Fux (23 mins.) sitting in front of a gigantic candle flame, Gaby Fuchs (10 mins.) who covers the ins and outs of getting your tongue pulled out, and the elegant Ingeborg Schoner (9 mins.) who recalls working with Lom and being startled by the cruelty of the final film.

The first HD edition of this film was a pricey, limited Austrian Blu-ray/DVD combo release from Atlas in 2012, which is Region B locked and features a superlative HD transfer along with the German and English audio (no sub options) in original mono or dubious 5.1 remixes. There's also a seven-minute reel of outtakes (a bizarre mishmash of slates, pretty scenery and bloody torture footage), the American and German trailers, a slim promotional gallery, and the music video for Get Well Soon's "Witches! Witches! Rest Now in the Fire," which samples this film's theme music (along with dialogue from Horror Hotel). Perhaps the most interesting exclusive extra here is, alas, completely 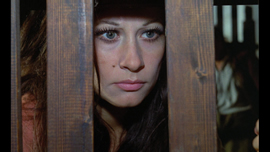 unfriendly for English viewers: a German picture-in-picture commentary (and an audio-only option) with Udo Kier, Gaby Fuchs, Percy Hoven, Dieter Menz, Wigbert Wicker and film historian Uwe Huber, who also appear for a brief video intro before the film. Weirdly, this title remains banned completely in Germany and unavailable there on home video.

Far more accessible for English viewers and heavier on the video supplements is the dual-format release from Arrow available first in the U.K. in 2014 and then in the U.S. in early 2015, which incidentally marks the first time the film has been released uncensored in the U.K. since a brief VHS in the early '80s. The 1080p transfer appears to be from the same immaculate negative except it contains the English opening credits and historical text crawl, which are German on the Austrian release (including a really nifty main title card erupting into flames). It really looks gorgeous, far better than any previous standard def editions could have come close to indicating. In a very welcome touch, the English and German mono tracks are presented here (LPCM) with optional English subtitles. The English one only contains Lom's actual voice, though Kier and Nalder were also speaking English and dubbed by others. However, virtually everyone else was clearly speaking German, and the voice quality of that version is far superior and much more serious in tone. Both releases are region free and feature identical Blu-rays (apart from labeling), while the DVDs are PAL and NTSC respectively.

Included here is a completely different, new audio commentary with Armstrong, here moderated by Calum Waddell. While the ground covered is very similar, it's a solid new addition and the little observations and questions vary as topics include the unrelated sequel (which Armstrong never saw), the music's similarity to the later Cannibal Holocaust, and of course the infamous lost ending, which he describes in some detail. The 47-minute High Rising featurette "Mark of the Times" covers the envelope-pushing wave of non-Hammer horror films from the late 1960s through the '70s, with Armstrong, Norman J. Warren, screenwriter David McGillivray, Kim Newman, and Prof. Peter Hutchings running through the highlights of the era starting around Witchfinder General and running through such films as Satan's Slave and Frightmare. Then Fangoria's Mike Gingold appears for "Hallmark of the Devil," a 12-minute guide to the infamous Hallmark Releasing who made a mint in America with this film, The Living Dead at Manchester Morgue, Bay of Blood, and, most famously, Last House on the Left. "Mark of the Devil: Then and Now" spends 7 minutes with soundtrack music accompanying shots of the film's Austrian locations separated by decades, often to fascinating effect.

Carried over here from the Blue Underground release are the four video interviews (Kier, Fux, Fuchs, and Schoner), with two new additions: a 24-minute featurette with composer Holm, who covers his slim soundtrack work before this and his modern approach to the material, and a 4-minute audio interview with Lom (in what sounds like a noisy kitchen), who affirms the directorial issues and the frustration of shooting this, his only film without direct sound recording. There's also a shorter selection of outtake footage (with music score), basically the juicy first three minutes with little extra odds and ends from slate markers with a few extra seconds of Nalder nastiness and meat chopping for good measure. (The rest of the outtakes are tucked awy as an Easter Egg, so keep your remote handy.) Also included is a lengthy new gallery of international stills, lobby cards, and posters, plus the English-language trailer and a liner notes booklet with a new essay about the film's bloody legacy and censorship issues by Adrian Smith and Anthony Nield, plus a vintage David Del Valle text interview with Nalder.