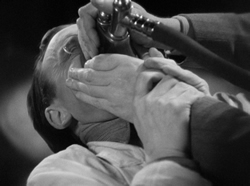 One of the highlights of Alfred Hitchcock's early British filmmaking period, The Man Who Knew Too Much was really his first sound film to establish the suspense tactics audiences came to know and love. Almost all of his sound films prior this (apart from Blackmail) had proven to be shortfallers in one form or another, but this 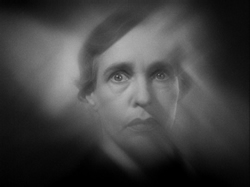 one really put him on track and led directly to the following year's The 39 Steps and six more British titles which became his calling card for Hollywood.

While on holiday skiing in Switzerland with their daughter Betty (Young and Innocent's Pilbeam), married couple Bob and Jill Lawrence (Banks and Best) make the acquaintance of French stranger Louis Bernard (Fresnay). Soon after, Bernard -- actually an agent for the Foreign Office-- is fatally wounded by an assailant but manages to tell the couple that some vital, nationally important information is in his hotel room. However, Betty is kidnapped to silence the Lawrences about the information in their possession, which links back to an assassination plot in London headed by the nefarious Abbott (Lorre). Can they unravel the mystery in time to save their child and stop another murder?

Of course, Hitchcock fans also know the importance of this film as the one title the Master of Suspense chose to officially remake, in 1956 with James Stewart and Doris Day as the Americanized couple. Hitch also famously referred to his preference for that color Hollywood version as the work of a professional, while this 1934 was created by a "talented amateur." The debate over the merits between the two may never really be resolved, as it really comes down to a matter of taste. What's interesting here is how the couple are portrayed as quick witted, urbane, and extremely personable, not to mention resourc 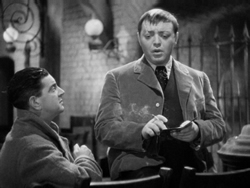 eful and even quick to leap into action when the situation demands it. Perhaps offering a critique of postwar America's shift into suburban complacency, the remake transformed them into far more self-absorbed, culturally smug characters (particularly Stewart's), and also tweaked some of the suspense set pieces (like shifting the original's dentist office scene into a weird red herring bit at a taxidermist's office). Both versions wisely make the main assassination scene at the Royal Albert Hall the climax of the story, featuring very similar editing and compositions to twist the audience into a nail-biting frenzy. 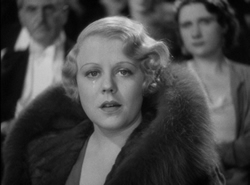 What's indisputable is that this version has a far more effective villain in Lorre, who had made an international splash as the child-murdering lead in Fritz Lang's M and was making the move here to English-speaking performances. He really doesn't come into play much until the second half, but considering the film runs a very tight 76 minutes, you still won't have to wait around too long. He's a wonderfully oily, sinister presence here, paving the way for his iconic turn in Mad Love the following year and a much weirder reunion with Hitchcock in 1936 with Secret Agent. Banks is also solid as the distraught father, keeping a stiff upper lip throughout and staying as far away as possible from his nightmarish turn as Count Zaroff two years earlier in The Most Dangerous Game. However, the most valuable player turns out to be Best, a theater veteran who create a strong, vibrant heroine you love to root for; she could almost be considered the template for the many multi-dimensional, fascinating women Hitchcock would later bring to the screen in his other thrillers. Whether bantering with her husband, tearfully watching an orchestra playing its way towards a murder, or whipping out a rifle for some sharp shooting, she's a real joy to watch.

Like all of the other Hitchcock British films, The Man Who Knew Too Much fell into the public domain and was released on both VHS and DVD but a multitude of video labels in numerous countries, all with transfers ranging 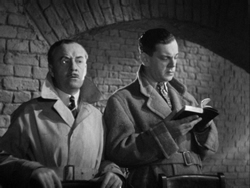 from mediocre to shoddy. The only remotely respectable DVDs prior to Criterion came from Network (in the UK) and Delta (in the U.S.), though these were still heavily damaged and far from satisfying. Criterion's 2013 edition comes in both Blu-Ray and DVD options, both of which look terrific; however, it's the Blu-Ray that really shines thanks to its major leap in detail levels and wonderfully rich contrast levels. You can now make out details in clothing and hairstyles invisible even in some circulating 35mm prints (and in one unexpected moment at the 26-minute mark, you can even vividly make out a squishy bit of fluid exchange between Banks and Best when they kiss!). The source was a new digital transfer from the BFI with restoration done (presumably digitally) with Criterion's input, while the (much, much improved) audio (LPCM single-channel mono) was taken from an optical track from a print originally held by David O. Selznick. The results were well worth the effort, and it stands tall as the best of Criterion's British Hitchcock releases (The 39 Steps and The Lady Vanishes).

On the extras front, film historian Philip Kemp leads with an audio commentary in which he puts the film in context with Hitchcock's previous films and points out the many visual and narrative trademarks which would inform his work, particularly the concept of an innocent hero targeted by sinister forces. Director Guillermo Del Toro also offers a short but very perceptive video intro in which he talks about this as the first really mature, genuine Hitchcock film and offers his own reasons for finding it unique and valuable among the early period. "The Illustrated Hitchcock" from 1972 is a TV special running a bit under an hour, with Pia Lindstrom (daughter of Ingmar Bergman) starting off by questioning him about his directorial approach to audience emotions and historian (and classic horror buff) William K. Everson joining in for a more specific discussion of his films, including this one. You also get a restoration demonstration, 23 minutes of audio excerpts from the legendary Hitchcock interviews by Francois Truffaut (which became a groundbreaking book and can be heard excerpted elsewhere on other Hitch video releases). Finally the set rounds out with a booklet containing a new essay by Farran Smith Nehme entitled "Wish You Were Here," which contains some interesting tidbits about Lorre's difficulty at the time with the English language. Hitchcock has certainly been treated well so far on Blu-Ray, and this sometimes overlooked but wonderfully entertaining thriller is one of the most satisfying hi-def tributes to the brilliant director so far.