While Japanese cinema was earning acclaim for its upscale horror classics like Ugestsu, Onibaba and Kwaidan, they could also get down and dirty with the best U.S. drive-in practitioners as evidenced by The Manster, a wonderfully degenerate monster romp co-financed and directed by Americans. Fondly remembered by countless impressionable TV fanatics and the inspiration for films as diverse as Army of Darkness and How to Get Ahead in Advertising, this one still retains a great deal of its power to startle and amaze. 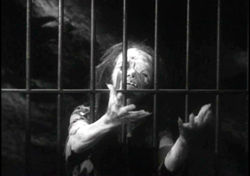 Starting out as an Asian variation on The Island of Dr. Moreau, our tale begins with Dr. Suzuki (The Human Vapour and The H-Man's Tetsu Nakamura), a mad scientist first seen gunning down his latest experiment gone awry, a murderous ape man. Stodgy American reporter Larry Stanford (Dyneley) arrives to interview Suzuki and, before you can banzai, is guzzling saki and dabbling with geishas. Unfortunately Larry's wife, Linda (Hylton), shows up to put a stop to the doctor's corruptive influence, but not before Suzuki has dosed Larry with a serum designed to alter the entire process of evolution! First Larry's hand becomes clawed and furry (hmm, sense any sexual subtext here yet?), and then an eyeball suddenly appears on his shoulder... 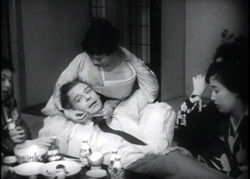 Almost Lovecraftian in its fixation on monstrous, surreal visuals intent on warping the audience's vision, The Manster is a unique, disturbing achievement well above the standard monster-on-the-loose fare. While the emergence of the eyeball and the climactic "split" are most often cited as the highlights, the whole film seethes with an unhealthy, twisted atmosphere potent from the opening images of a deformed woman frothing and raging inside a cage, with Suzuki looking on in pitied fascination. It's unlikely this one did much for the Japanese tourist trade, but it's a depraved precursor to the gorier terrain the country would soon explore in horrific gems like Jigoku. Of course, it also beats the "body in revolt" horror of David Cronenberg by well over a decade; one need only look at films like Videodrome and The Fly to see how this one scarred filmmakers for life. 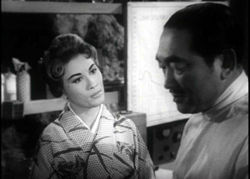 A mainstay of public domain home video for years (with a brief detour through MGM thanks to partial funding from United Artists), The Manster makes the transition to DVD in a fairly satisfying transfer from the nostalgia junkies at Retromedia. The print is extremely clean and clear apart from the opening credits, and apart from some weak contrast in some shots and occasional soft detail, this is a respectable presentation, far superior to your average PD video. The mono audio sounds clear enough, though dialogue occasionally gets muffled. The disc also includes a fun still gallery lifted from the film's U.S. promotional press campaign.