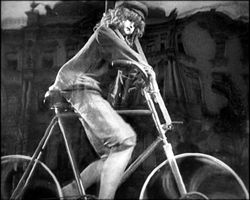 Arguably the high point of the Russian avant garde movement, Man with a Movie Camera remains one of the regular staples of film school courses around the world and stands as a perfect distillation of the power of editing and camera 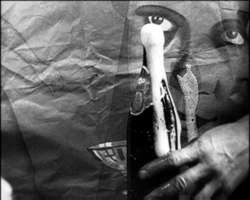 movement. With nothing resembling a plot, it simply aims to capture the feeling of a bustling Russian culture solely through the language of film, or as the introduction by the directors phrases it, divorced from the separate art forms like literature which rely on more traditional means of communication. Scenes filmed in Moscow, Odessa and Kiev mingle together in a visual symphony conveying a day in the life of a modern industrialized nation where people and machines labor together, mirrored in the relationship between a filmmaker and the camera which captures his visions.

Difficult to describe and wondrous to behold, this frenzied cinematic experiment depends heavily upon the proper presentation for its full impact. As with most silent-era Russian films, prints and video editions vary wildly in quality around the world with one restoration after another announced with very mixed results. The BFI has issued no less than three versions, with the first two consisting of a standard and remastered version of the film with scores by the Alloy Orchestra and In the Nursery, both of which are excellent and exclusive to the Great Britain versions; the reissue contains the same transfer as the remastered one created for the German disc (and a less impressive port onto the French one), which was eventually used for the American Kino version as well. The BFI version contains a useful commentary by Yuri Tsivian who offers a thorough history of Vertovs techniques and intentions with the film. The German and French discs each contain exclusive documentaries but contain no English-friendly options.

However, the best-looking of them all is the third BFI edition, officially entitled Michael Nymans Man with a Movie Camera, which is part of a trend with having modern composers ranging from James Bernard (Nosferatu) to the Pet Shop Boys (Battleship Potemkin) provide unique scores for silent films. Modern classic composer Nyman is definitely in avant garde mode here, appropriately enough, with a pulsating, circuitous work that perfectly accompanies the action, similar to his earlier film scores such as A Zed and Two Noughts and The Draughtsmans Contract. This version contains no extras, but its a very exciting presentation and obviously a must for Nyman fanatics as the score is available nowhere else.