Possibly the strangest by-product of the serial killer movie fad during the 1990s, Man Bites Dog (originally C'est arrivé près de chez vous, or It Happened in Your Neighborhood) straddles the art film and exploitation line by passing itself off as a humorous social commentary, albeit packed with brutality stronger than a Lucio Fulci film. 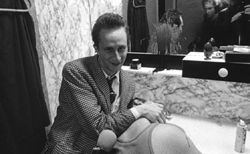 Shot in a black-and-white documentary style on 16mm complete with handheld cameras, jump cuts, bad lighting, and negative dirt, the film takes a small band of filmmakers on a harrowing journey with their subject, serial killer Ben (co-director Benoît Poelvoorde). A disturbing mixture of wit, charm, prejudice, and psychopathic behavior, Ben is soon calling the shots on the production as he dumps bodies, declares his own personal philosophies on every subject in sight, and eventually indicts the cameramen as co-conspirators in his crimes. Victims include everyday folk from all walks of life, with a particularly disturbing Christmas celebration going even further than run of the mill homicide. Eventually an encounter with one of Ben's competitors in the killing and thieving department goes badly, incidcating the raconteur/murderer may not be as infallible as he believes. 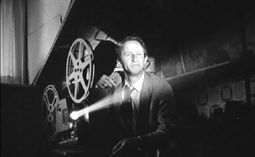 Despite its enthusiastic critical reception and the largely self-generated controversy (which resulted in the usual watered-down video version for the Blockbuster crowd), Man Bites Dog isn't even an especially accomplished film so much as an oddity. Holding a series of fractured mirrors up to a world view that condescendingly celebrates the tortured and the damned, the film holds up even better now that real life exploitation has passed from the realm of screeching talk shows into the even more disturbing waters of reality television. Spoofs like Series 7 and $lashers look especially milquetoast compared to this vicious little animal, which isn't much fun to watch but sure makes for a hell of a conversation piece. And while none of the three filmmakers (as of this writing) have gone behind the camera again, it's worth noting that the influence of Man Bites Dog lingered far beyond its theatrical and video runs. For proof, just look at that last shot of The Blair Witch Project, a bald-faced imitation of the eerie denouement from its nastier and far more effective French cousin. 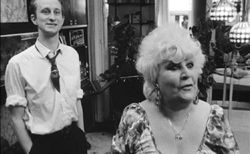 Criterion's upgraded, anamorphic transfer manages to capture every single bit of grain, dirt, and botched edits in this deliberately scrappy assembly. The optional subtitles improve significantly over previous video editions, not to mention Tartan's U.K. DVD, where the permanent English subs often vanished completely against the blazing white backgrounds. Here the lettering's black outlines make each jaw-dropping line of dialogue perfectly legible. The sound mix is, well, spare and rough as it always has been. The extras are largely carried over from Criterion's laserdisc, such as a 12-minute short film, "No CC pour Daniel-Daniel," a mock-trailer spy spoof filmed "en Cinemascope 16!" Also on hand is a hand-held video interview with the three directors (speaking English with very thick accents as they wander through a subway tunnel), the nicely edited French theatrical trailer, and a bizarre behind-the-scenes photo gallery which shows several of the "victims" relaxing between takes.