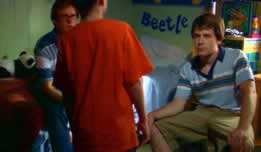 Offering a fresh spin on a zombie story has become a tricky proposition nowadays, with filmmakers usually trying to offer a post-Romero political allegory with a combination of gore and black comedy. (See Zombies of Mass Destruction, 28 Weeks Later, Dead Girl, et al.) However, the eerily haunting Make-Out with Violence offers an imperfect but often beguiling twist on the formula by using the undead as one of the mechanisms in a melancholy summertime teen drama that often captures the confusing, tonally weird experience of adolesence itself. 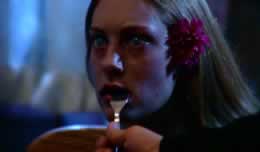 As a young narrator informs us, pretty Wendy (Shartzer) has died at the begining of summer in a lonely area of the woods, an event discovered after her funeral in absentia by two twin brothers, Patrick (Lehning) and Carol (DeVos). See, Wendy isn't quite all dead; her body (inexplicably found lashed to a tree) has some basic motor functions, and while she isn't quite the vivacious presence they remember, Patrick is still infatuated enough with her to think that taking her to a friend's empty house and caring for what's left of her is a good idea. They and their friends make a pact to keep Wendy's presence a secret, and as Carol begins to get back on with his life over the rest of the season, Patrick still finds it hard to let go... 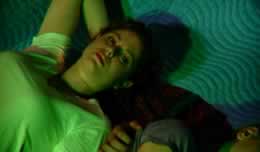 A macabre sunlit poem, Make-Out with Violence is much closer to fare like The Virgin Suicides or maybe The Royal Tenenbaums (by way of Let's Scare Jessica to Death) than your traditional horror film; its goal here isn't really to frighten but rather to create a mood of wistful strangeness accentuated by a terrific alt-pop soundtrack that creates the perfect dreamy atmosphere. This definitely won't be for everyone, especially viewers expecting a film with teenage zombies running rampant through their high school; the blood content is fairly low (though the ending delivers a grisly little punchline), relying more on suggestion than anything explicit. The young actors all do a solid job, especially the charismatic DeVos and co-writer Lehning as the tortured Patrick who suffers from the most destructive form of puppy love imaginable.

A prominent title in many festivals for a couple of years, Make-Out with Violence underwent some tweaks here and there along its path to its finished form at 105 minutes. Even more pruning might have been helpful (a 90 minute running time would've probably been perfect), but you can see some of the extra trims and cut scenes on the DVD edition (as well as the much-delayed Blu-Ray, which wasn't available for review). The anamorphic transfer (with optional English subtitles) accurately captures the colorful, detailed appearance of the original HD photography, which ranges from a delicate, film-like texture to some darker scenes more typically laced with video noise. Audio is in Dolby Digital Stereo. Other extras include a novel audio commentary with "the directors' younger brothers" Kevin Doyle and Zach Duensing (a pretty technical-oriented track focusing on the effects and locations), a 34-minute behind-the-scenes featurette, two additional cut song scenes with intros, six radio spots, a look at the concept art evolution for the film's poster design, and four live performances of songs from the soundtrack performed for promotional purposes.