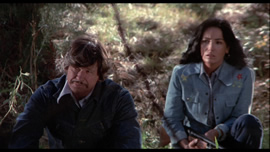 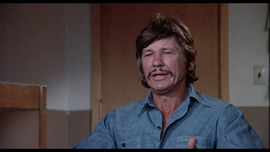 Easily one of the screen's greatest tough guys, Charles Bronson had already enjoyed a diverse, impressive run of films before he hit it big with his signature role as vigilante Paul Kersey in 1974's Death Wish. In fact, earlier that same year (by a nose) he'd already headlined another top-notch crime film, Mr. Majestyk. which was penned by none other than legendary hardboiled crime writer Elmore Leonard and helmed by the prolific Richard Fleischer, who took this one on in between Soylent Green and Mandingo. (How's that for range?) Here Bronson plays the title character, a Colorado melon farmer and combat veteran who arranges for local migrant workers to handle his crop.

Trouble starts when the local syndicate buses in its own white workers to replace the predominantly Latino ones Majestyk employs, but the landowner isn't having any of it and sends off one of the gun-wielding thugs with a whipping. That sends the cops calling with Majestyk going off to prison for assault, where he makes instant enemies with a combative hit man, Frank (Lettieri). Fate steps in when the two inmates wind up on a bus where a prison break to bust Frank out puts the evildoer in Majestyk's hands, a perfect bargaining chip to earn his freedom. Aided by a sympathetic labor organizer and potential partner, Nancy (Cristal), he soon has to fend off trigger-happy mobsters intent on ruining both his business and his life, culminating in a shotgun-blasting showdown that blows holes 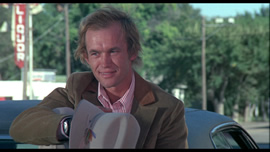 through multiple stories in a single house.

Mr. Majestyk belongs to the solid run of tough, revenge-minded action films Bronson specialized in at the time, following such titles as The Mechanic (another United Artists film with which this was often paired) and The Stone Killer. The canny 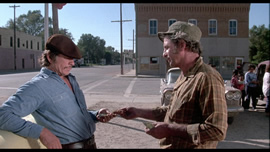 script puts viewers on Bronson's side right from the beginning when he stands up to a bigoted store owner, and interestingly enough, its themes of racial tension, labor disputes, and corrupt business influences resonate today even more than they did at the time. It would certainly be interesting to see the reaction if Jason Statham ever starred in a remake of this one. Fleischer keeps the story cracking along at a steady pace, giving Bronson a wide berth to run the show without any other major stars to distract audiences. Also noteworthy is the catchy, evocative score by Charles Bernstein, with a tone similar to two films he worked on around this one, White Lightning and Gator.

Mr. Majestyk has been very easy to see through the years, appearing as a perennial on afternoon TV screenings throughout the '80s and remaining in circulation on virtually every video format under the sun. A fine HD master was struck for airings on MGM HD and first appeared on Blu-ray in 2013 via a German Region B release; that same one appears to be the source for the Kino Lorber Studio Classics edition from 2014, available on both Blu-ray and DVD. The compression is handled a bit more carefully here and the source is already excellent, so there's really no room for complaint here. Detail is strong, the blasting sun brings out some warm and rich colors throughout, and you can practically count each hair in Bronson's mustache. It still looks like a 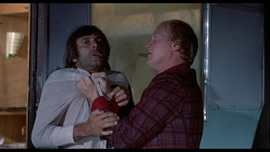 35mm '70s production so fans of slick Blu-ray transfers that "pop" won't get their fix here, but for an authentic presentation it's more than satisfying. The sole extra is the theatrical trailer, which still works like gangbusters.

However, if you really love the film and can play Region B discs you'll definitely want to spring for the British Blu-ray from Signal One, 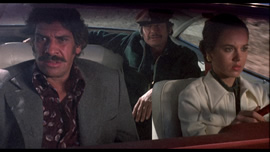 released over a year later with a much heftier slate of extras. The transfer is from the same source, and as with other films released by by Signal One and Kino, detail levels are the same but the black levels are a notch deeper with the impression of a bit more depth in the process. Either way it looks great, and the LPCM English audio sounds pin sharp and authentic to the original mono mix (with optional English subtitles also offered, a nice touch). Paul Talbot, author of the excellent books Bronson's Loose!: The Making of the Death Wish Films and Bronson's Loose Again! On the Set with Charles Bronson, contributes a terrific audio commentary packed with great details and a lot of research, with Bronson and Fleischer getting much of the focus. Virtually every aspect of the production gets covered here including Bronson's willingness to do all but two of this stunts for the film, the territorial limitations of Coors beer, the film's connection to Halloween II, and fun little details about the costuming and bit players. You also get a pair of featurettes produced by Fiction Factory: "Colorado Cool" spends 14 minutes with ace cinematographer Richard H. Kline recalling the tricks of shooting the chase scenes with clever angles and stunts for maximum impact (he still cites the film as one of his favorites), while "Colorado Chic" features a 28-minute interview with the still-busy Lee Purcell, who covers her career origins through her work on this film (whose cult status still surprises her) including her near miss getting the role and numerous positive memories of both her director and leading man, whom she recalls as humble and quiet with his wife and kids in tow most of the time. Her story about the demise of Lettieri soon after the film is especially touching, too. Finally the disc rounds out with the original trailer and a gallery of lobby cards, posters, and promotional stills. If you're a Bronson fan, there's no way you can pass his one up.