Long before the advent of incredible trailer comps like the indispensable 42nd Street Forever series, and way way way before fake trailers became online staples, horror fans had to often search far and wide to track down the trailers for their favorite films, which were never included on VHS tapes and only occasionally on these antiquated things called laserdiscs. One of the big breakthroughs on this front came in 1987 with a little homegrown classic called Mad Ron's Prevues from Hell, which collected a barrage of the most outrageous, extreme genre trailers in sight and wrapped it all together with shot-on-VHS footage involving a depraved projectionst, Mad Ron (Pawlow), and his wisecracking zombie dummy, Happy Goldsplatt. Soon zombies are invading the theater and eating the concession stand workers, but that doesn't stop the parade of trailers from getting zanier and gorier. 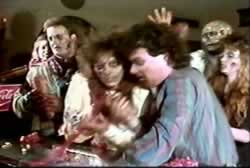 Anyone used to pristine, polished trailer comps may very well be confused by this instant blast of '80s VHS nostalgia, which was mainly sold through magazines but could be found on the shelves of some of the more adventurous mom 'n' pop video stores. The monster and gore FX are actually pretty good for their time, certainly better than the camcorder lensing, with contributions from Jordu Schell (Avatar) and TV effects artist Jay Kushwara. Sure, it's pretty corny and dated, but there's still plenty of fun left in this one. Some of the trailers are actually still pretty rare, too, especially Brian De Palma's Sisters, which still has yet to show up anywhere else. Other classic coming attractions include The Texas Chainsaw Massacre, I Drink Your Blood/I Eat Your Skin, Deranged, Three on a Meathook, The Corpse Grinders, The Undertaker and His Pals, Love Me Deadly, Children Shouldn't Play with Dead Things, Cannibal Girls, Torso, Blood Spattered Bride/I Dismember Mama, The Maniacs Are Loose, The Wizard of Gore, 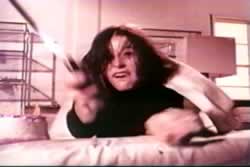 The Ghastly Ones, Deep Red, Beyond the Door, House of Exorcism, The Devil's Nightmare, Lady Frankenstein, Flesh Feast, Tales from the Crypt, Vault of Horror, Horror of the Zombies, Blood Eaters, Orgy of the Living Dead Triple Feature, Diabolical Dr. Z, Africa Blood and Guts, Night of Bloody Horror, Silent Night Evil Night, The Mutations, Blood and Lace, The House that Screamed, Two Thousand Maniacs!, Night of the Living Dead, God Told Me To, Horror on Snape Island, Man from Deep River, Ilsa - She-Wolf of the SS, Last House on the Left, Carnage, Color Me Blood Red, Mad Doctor of Blood Island, Silent Night Bloody Night, Bloody Pit of Horror, and Night of the Bloody Apes. Whew! Yeah, you've probably seen most of these elsewhere by now, but this tape did it first and did it best. 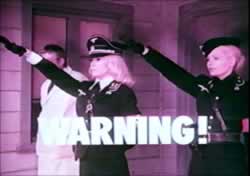 It took an eternity to get this baby back into circulation, but Virgil's official DVD manages to sweeten the deal more than just a presentation of the main feature itself (which, as you'd expect, still looks exactly like something shot on '80s-vintage VHS). You get two great behind-the-scenes segments (also shot on tape) showing the zombies and crew clowning around and the creation of Happy by the FX artists; it's actually pretty fascinating stuff and a real kick for Mad Ron fans. Also included is a photo gallery from the shoot, a poster gallery of featured titles, and two hilarious "deleted scenes" that are actually just two additional gore trailers (one of which should have been included the first go-round, for obvious reasons). If you were an '80s horror kid, this is absolutely essential and definitely an upgrade for anyone whose VHS copies or bootleg DVD-Rs just don't cut it anymore.