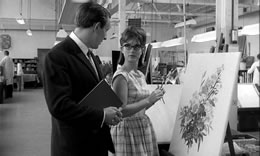 A fascinating and emotional little film that slipped into UK theaters during the early days of the gritty kitchen sink realist days of British cinema, Lunch Hour is a sort of proto-feminist chamber piece taking place in real time (sort of) at a factory where a pretty young girl (Field) who enjoys painting and was trained at art school has been developing a relationship with one of her superiors (Stephens). Together they go out at lunch hour and escalate their intimacy through making out at a movie theater to trying to book a hotel room for the afternoon to consummate their feelings for each other. However, when the facade they put up of posing for a married couple escalates, she begins to have alarmist fantasies about the burdens of matrimony and motherhood, leading to more complex developments than either of them had expected. 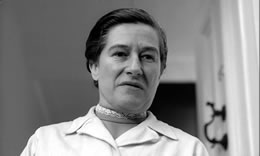 Simple, spare, and charming, this very short film (clocking in just over an hour) is distinguished by an incisive, charismatic central performance by Shirley Anne Field, who had already appeared in Peeping Tom, Horrors of the Black Museum, and the acclaimed Saturday Night and Sunday Morning, with These Are the Damned and Alfie to come soon after. It's a treat seeing her in a variety of dramatic situations with her male co-star, Robert Stephens, a still-busy character actor perhaps best known for the title role in Billy Wilder's The Private Life of Sherlock Holmes and the romantic lead in The Prime of Miss Jean Brodie. Eagle-eyed viewers who love British cinema's familiar faces should also keep an eye out for Kay Walsh (The Ruling Class) and a young Nigel Davenport way before No Blade of Grass, The Island of Dr. Moreau and Phase IV. Quite a pedigree for a little film that somehow fell between the cracks. 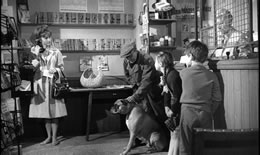 Keeping up an astonishing track record of unbroken releases with nary a dud in sight, the BFI's Flipside series continues with this 17th entry in their usual dual-format edition containing both a DVD and a Blu-Ray. The latter is the way to go if you can play it; as with their past B&W titles, the clarity is impeccable and offers demo-level proof that vintage titles of all stripes absolutely deserve to be preserved in HD. Optional English subtitles are also included, and both versions are region free. The uniting factor for this release is its director, the late James Hill, best known for helming Born Free and A Study in Terror. Three of his color shorts from 1958 to 1963 are included, all of which also function in various capacities as plugs for BP (which will probably provoke a very different reaction from viewers now than they would have a few years ago). "Skyhook" (17 minutes) shows how industrialization has allowed the transportation of heavy material through Papua New Guinea, though it's really an excuse for lots of lush, vivid jungle footage with aerial viewers of the titular hook hauling giant loads through the trees. "Giuseppina" (31 minutes), which garnered an Oscar for Documentary Short (though it's entirely staged), features the title character, a young Italian girl, reacting to the colorful characters passing through her father's gas station (and guess who the brand is?). The best of the three is "The Home-Made Car" (28 minutes), which eases up on the product placement apart from one scene as it depicts a man salvaging a decayed wrecked vehicle in the countryside and, with the help of his daughter, building it up to glorious new condition and taking it for a spin -- with a fun little romantic twist ending. None of the shorts really feature much in the way of dialogue, with the last one relying on sound effects entirely. As models of narrative economy and "showing, not telling," these miniatures are still quite accomplished and entertaining. The release comes with an extensive booklet containing liner notes on the main feature by Sue Harper (who covers everything from its play source to the reasons for its last of a real release), a Hill bio and notes on his BP films by James Pier Taylor, and the more general "James Hill and the Trade Test Colour Films" by Rob Harries. Quirky, modest, and engaging, it's another top-notch release from the BFI for a film most people probably never even knew existed.