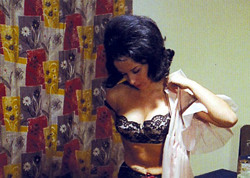 When mondo mania seized the world in the wake of 1962's geek-show documentary Mondo Cane, producers around the globe were quick to cash in with salacious looks at the nasty, nasty things crawling around in their own backyards. Italy led the pack for years, of course, often picking up American narrators along the way for the likes of Ecco and Mondo Balordo. Great Britain didn't jump in the mondo pool quite as vigorously at first, but enterprising director Arnold L. Miller (who made his name with nudist camp movies) joined forces with producers Michael Klinger and Tony Tenser (two major figures who also yielded Repulsion, Witchfinder General, Frightmare and <>Blood on Satan's Claw) for one of the first UK-based entries, 1964's London in the Raw. All the necessary elements are here: the holier-than-thou, faux-American narration (delivered by Canadian TV presenter David Gell), a "socially redeeming" approach to excuse all the burlesque and peek-a-boo topless shots, and hip footage of kids getting down to that crazy rock 'n' roll music.

London in the Raw, entirely focuses on the thesis that English culture is primarily dependent on appearances, with substance coming in a distant second. Some fairly innocuous fashion footage kicks things off, but the coverage gets far more interesting as we take a visit to a '60s women gymnasium (which the narrator regards with a perplexing amount of scorn) and watch such shocking procedures as -- wait for -- hair plug treatment and accupuncture. A trip to the city's Whiskey-a-Go-Go provides the requisite footage of youngsters twisting and jiving in their Capri slacks, followed by an "Olde London" fish restaurant called Flanagan's, teenagers sitting around smoking and eating cat food(!), a (ridiculously staged) trendy eatery where patrons can watch or paint a nude model onstage, a performance at the city's only Jewish theater, a dance bar for German residents and au pairs, and plenty of burlesque and nightclub performances, all capped off with a soul version of the Adam and Eve story and jarring experimental music blasting over a montage of the film's highights as the narrator warns about London's "cold center." ("Look, touch, taste and feel; but don't try to break it -- it'll break you first!") As with most mondo films, the shock value has been traded out now for fascination with the clothes, attitudes, and practices of a generation on the cusp of major social change. Even the staged scenes now reveal much more about the time than what was probably intended (not surprisingly, the Profumo politicians-and-whores scandal is cited right after the opening credits), and at times the narrator and filmmakers seem deeply nostalgic for a time when sex was something naughty kept hidden away from public view. It's a fascinating experience to be sure, and not surprisingly, the filmmakers regrouped the following year for a significantly more outrageous follow-up, Primitive Love (more on that below). 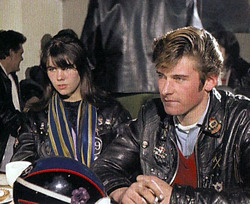 Tossing another curveball to home video enthusiasts, the BFI have unleashed this forgotten curio in both DVD and Blu-Ray editions culled from the original negative. To say the least, the results here are remarkable and throb with eye-pleasing Technicolor hues that rival the best MGM musicals. Every shot is bursting with candy-colored images but the real highlights here are the club scenes, featuring bright, vivid outfits and lighting. It's a gorgeous presentation all around, with the Blu-ray obviously delivering a significantly sharper and punchier experience compared to its standard def counterpart. Optional English subtitles are available for the mono soundtrack.

As for extras, you get an alternate 45-minute version of the film (which chops out most of the musical interludes and features some bits of alternate footage, including a funny bit with a Siamese kitten); perhaps it was prepared for school exhibition to unprepared youngsters. Also included is the lip-smacking theatrical trailer, and three other mid-'60s short documentaries offering a somewhat different take on London life. "Pub" is a haunting and far more gritty depiction of bar denizens singing and drinking their troubles away, while "Chelsea Bridge Boys" is a half-hour 1965 series of interviews and on-the-fly footage with various biker boys and girls as they speak (often with very thick accents) about their lives and philosophies. It's a bit overlong, but the snapshot depiction of this culture at its heigh is invaluable. Finally, 1966's "Strip" goes backstage at a burlesque hall where the performers from all walks of life discuss their motivations and dreams. All of the extras are presented in HD on the Blu-Ray version and helpfully come with optional English subtitles as well, which comes in especially handy for the second short. The disc comes with a very hefty 40-page illustrated booklet crammed with ads and posters as well as thorough liner notes by Stewart Home (who covers the stories of the major participants quite well) and comments from the short film directors as well. Both the Blu-Ray and DVD are region free.

Mods! Rockers! Teddy boys! Beatniks! All these and more are on display in Primitive London, the considerably more shocking follow-up to London in the Raw which kicks off with the first birth-of-a-baby footage ever presented in hi-def. Naturally, it's even more vivid on the Blu-Ray version and perfect for showing off your home theater setup to unsuspecting visitors. From there we inexplicably jump to London's youth culture, with the narrator and interviewer confusingly reserving most of their scorn for the coffee shop beatniks (most unemployed poets, apparently) who answer arbitrary sex questions with an amusing look of confusion on their faces. The gym sequence from the first film is topped here by the narrator's insistence that women couldn't possibly take any similar enjoyment from men's bodies, which is then proven by lingering for what seems like hours on the homeliest bodybuilder ever captured on film. This time the film goes for a bit more structure than its predecessor by returning to (staged) footage of an often-botched commercial taping, but the most audacious highlight comes early on when the voiceovers of the film's director and editor start quibbling about artsy nature footage which then switches to a topless bathing suit show. What else do you get? Goldfish surgery! A gory Jack the Ripper reenactment! A brutal chicken farm! Tattoo parlors! Female martial arts! Turkish baths! Swinging key parties! And a men's hat-measuring shop! The growing preoccupation with strippers also foreshadows the director's following film, Secrets of a Windmill Girl, which pushed the showgirl fixation to 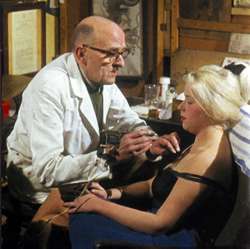 Faster and nuttier, Primitive London never stops to catch its breath as it drags the viewer through a head-spinning arrays of sights and sounds, all beautifully captured by the BFI's immaculate hi-def presentation. The region-free DVD and Blu-Ray editions are shockingly colorful and look like a first-night theatrical projection, with the latter obviously offering even more detail, fine grain, and accurate color delineation. This time out you also get an alternate French language track and two subtitle options, a literal English one as well as an English translation of the French track (which basically means the slang terms get replaced by more standard, accessible verbiage). The mono soundtrack is also worthy of note, featuring a delightful blend of jazz, early rock by The Zephyrs, and avant garde music by composer Basil Kirchin, who later went on to The Shuttered Room and The Abominable Dr. Phibes. 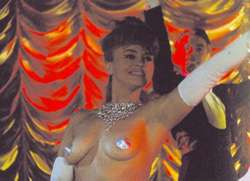 The most interesting extra this time out is "Carousella," a 26-minute, 1965 early short by John Irvin (who went on to direct The Dogs of War and Ghost Story). It's a surprsingly well-made and visually striking look at three strippers' day-to-day lives, edited and shot with an amazing degree of style. A vintage 17-minute interview with Al Burnett covers the illogical and arcane liquor licensing laws of the day, which are addressed rather venomously in London in the Raw, while stripping turns up again in a 1968 Stuart McCabe interview and a chat with "Shirley" about the rules and regulations which governed the 1960s. The booklet this time is just as substantial, loaded with great original ad art and liner notes by Ian Sinclair, who takes a more creative approach with the material than the trivia-based Raw. He also sheds a bit more light on cinematographer Stanley Long, who went on to become a director in his own right with plenty of '70s sex comedies like Sex and the Other Man and three of the Peter Long Adventures of... films. Definitely recommended for reasons far too numerous to count.