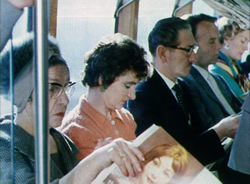 Something of a UK home video mainstay at this point, the ongoing British Transport Films collection from the BFI has become a time capsule of the past century. It's been a goldmine for train fanatics, of course, as well as documentary buffs who love seeing popular culture evolve from the post-World War II era into the early '80s. The BTF film production unit's pu 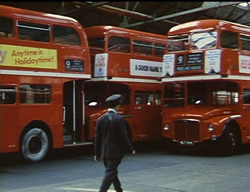 rpose was to promote both the innovations undertaken to move people all over Britain and to train them to use modern transportation as safely as possible. Today you'd think everyone would know how to use a subway turnstile, but that wasn't always the case. A combination of the quaint and the hip, the arty to the flat-out corny, London on the Move marks the tenth DVD installment in the set and makes for a fun kaleidoscopic view of how a major city burst to life after one of its most traumatic periods.

The first disc kicks off with 1963's "All That Mighty Heart," basically a colorful day in the life of London from the break of dawn to the last bus run of the evening. Everything from commuters to work to housewives running errands to tourists checking out the zoo and the Thames are covered in just under 25 minutes, offering a giddy and oddly poetic depiction of the early years of the decade. The much shorter training film "Our Canteens" (1951) demonstrates the efficient way to deliver food to the hundreds of London canteens all around the city, showing how to be a good worker and understand the service being provided to the public. Then it's back into the '60s with "One for One," a monochrome study of the refurbishing and sometimes complete overhauls given to the city's buses after passing their mile limitations. If you love seeing those double decker buses, this is an Anglophile's dream come true. "The Nine Road" (1976) refers to one of the oldest bus routes in the city, showing how this still-vital path was being kept up to date with technological innovations like electronic bus locations and routing. In a way it's almost like the UK bus equivalent of The Taking of Pelham One Two Three as you see the c 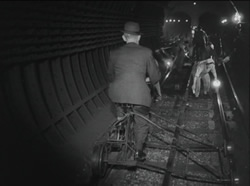 utting-edge methods used to move people in the Me Decade. It's back to black and white again with the very short (just over nine minutes) "Cine Gazette No. 14: Do You Remember?," a 1955 survey of the surprisingly elaborate lost and found program, including various pets and accessories that go wandering off on buses and trains. The disc closes out with the title short, "London on the Move," which is easily one of the most entertaining as depicts the city in 1970 as a bustling labyrinth of interconnected trains, metros, closed circuit security video, bus routes, and lots and lots of people. 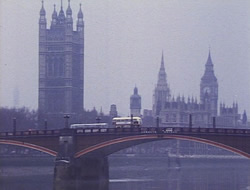 Shot in very bold and vivid colors, it's a terrific snapshot of the station decors, vehicles, fashions, and even hairstyles of the era. Also included as a separate special feature is 1947's "Moving Millions," apparently segregated because it's from the Central Office of Information (an entirely separate BFI DVD line, incidentally) taking a much earlier look at how hordes of people get shuttled across the busy city from dusk till dawn every day.

Perhaps the most revealing and fascinating short of them all leads disc two: "Under Night Streets," a 1958 peek at the inner workings on the tube lines after the trains have closed for the evening. You get to see the workers toiling away repairing the tracks, going deep in the tunnels, cleaning out all the human-caused debris, and testing out the workings from every possible angle. It's all visually striking, too, and would actually make a terrific short film before watching Quatermass and the Pit or Raw Meat (aka Death Line). The even earlier "Power Signal Lineman" is another training short for the signalmen posted throughout the transportation system who have to deal with any range of emergencies due to technical glitches in the system. 1979's "Omnibus 150" is essentially a 16-minute celebration of 150 years of the city's current bus system, showing the evolution of the vehicles themselves since the late 1800s and even the Omnibus predecessors during the horse-driven days. "Cine Gazette No. 10" from 1951" spends a quick ten minutes with a news-style story about bus driver training, subway repair, and recycled footage from the earlier London canteen short. Made just after the BTF's final days but serving the same function, "Moving London" from 1983 is more or less an updating of "London on the Move" with several famous earlier shorts cut into a more comprehensive survey of its history for the past half century, including the creation of the now-busy Victoria and Jubilee underground lines. Easily the funniest offering is the partially-animated "AFC: Automatic Fare Collection and You" from 1969, which teaches people how to buy tokens and use automatic turnstiles. Finally, "Overhaul" (1957) devotes 17 minutes to vivid color footage of Aldenham, where the buses within London's huge fleet are taken to be, well, overhauled when they need it, with customized designs allowing them to swap parts and design components easily to get them back on the road as quickly as possible.

As usual for the BFI, the liner notes are highly recommended to get the most out of your viewing; Patrick Russell offers a general overview of British Transport Films and the London Transport subdivision, while Stephen Edwards breaks each title down with comments about the backgrounds of each and pointing out the identities of some of the narrators and members of the production crews, plus a brief note on "Moving Millions" by the BFI's Tony Dykes. Whether you're a fan of trains, short films, documentaries, English culture, or just pop culture in general, this series provides a reliably entertaining walk through history showing how complicated, colorful, and sometimes strange modern progress can really be. All of these have been kept in fine shape over the years, with the titular one in particular looking virtually pristine and as good as many Technicolor Hollywood productions.