Ever since F.W. Murnau ticked off 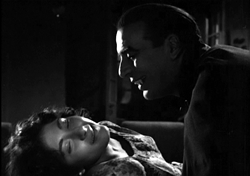 Bram Stoker's estate by turning Dracula into the not-terribly-well-disguised Nosferatu, that immortal vampire novel has been twisted and turned in almost every country capable of producing motion pictures. The tradition continued in Pakistan which turned out one of its rare forays into gothic horror courtesy of Zinda Laash, or as it's now known in English, The Living Corpse. The perplexing opening finds a determined scientist, Professor Tabani (Rehan), furiously toiling away in his laboratory amidst beakers and Bunsen burners. Soon he's concocted a potion capable of conquering "death's domain," which he tests out by promptly swallowing his creation... and dropping dead on the spot. Luckily his buxom assistant finds him soon enough to get his body shuffled down to the crypt, where he's left uncovered long enough for him to rise again from the grave and put the bite on the poor lass. Flash forward to the journey of Dr. Aqil (Habib), a weary traveler who decides to stop for the night at a desolate mansion known to be haunted. The host turns out to be Tabani, now in full vampire-cloak regalia, who offers him a room where he will prove easy prey. That night Aqil is lured downstairs by the lure of the vampire bride, who seduces him into a fanged clench by performing a swinging go-go number. Really. With the poor doc now in vampiric clutches, it's up to his brother and friends to track down the fiendish villain who has decided to leave his home and feed on the local populus.

Though structurally indebted to Hammer's 1958 adaptation (and its first sequel), this fascinating exercise lifts many of its visual flourishes from the Universal classics and similar monochromatic offshoots like the Mexican monster films of the 1950s. The fusion of mad scientists, musical numbers, car chases, baby scarfing, and groovy music makes for a wholly unique experience, not unlike what a particularly imaginative child might come up with on a sugar rush after reading a comic version of the Stoker tale. Most of the horror elements are fairly tame by today's standards 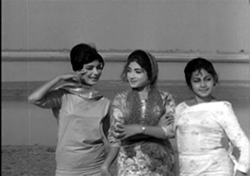 and certainly pale next to some of the other Eastern horrors unleashed in subsequent decades, but the gothic mood is skillfully maintained thanks to some very skillful, nicely composed camerawork and lighting. Though unknown today, the film was apparently strong enough to incur the wrath of the local censor board, who eventually allowed it to be screened for a adult audiences only (a rarity in Pakistani cinema, according to the supplements). Presumably the plentiful neck-biting and cleavage were enough to pull in the audiences and shake up the powers that be; one can only imagine the reaction if the filmmakers had followed through on the implications of the opening scene and gone with a Frankenstein adaptation instead. In any case, it's a respectable adaptation all around; the familiar vampire-hunting climax is pulled off her with real panache, including some startling imagery (the sunlight bit) and one perfectly timed jolt.

Once again Mondo Macabro has salvaged a genuine curiosity from oblivion with this red carpet release, which presents a transfer from the refurbished negative. 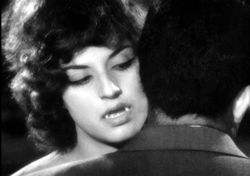 The image is pin-sharp almost consistently throughout the film, and despite a disclaimer warning about some damage which could not even be repaired with digital aid, there are only a few flawed bits worth mentioning. The picture seems to wobble and shift during a handful of scenes (including one extended warped bit around the 47:00 mark), but most of the drawbacks appear to be printing problems judging by the jagged splices and grainy outdoor/stock footage shots. Optional English subtitles are provided and seem to be both literate and smartly paced. The plentiful extras kick off with another excellent Mondo Macabro documentary, "South Asian Horror," which offers a mouth-watering look at this strain of cinema fantastique with a focus on the '60s through the '80s. Some of the films look borderline goofy or even comedic, but the avalanche of bizarre monsters, lasers, and screwy supernatural voices proves to be quite ingratiating after a few minutes. Topics covered include Pakistani action films, Hindi supernatural/musical epics, and much more. The film itself is accompanied by an audio commentary with the video label's Pete Tombs and film critic Omar Khan, who explain the cultural state of Pakistani cinema at the time, cover the censorship brouhaha it caused, explain why the vampiric lead imported his fangs from Germany, and provide some welcome context for its entire existence. Also included are an artifact-riddled trailer (which appears to be a newly created promo judging from the digital-looking text copy), a gallery of posters and stills, and another specially created featurette, "Dracula in Pakistan." Focusing entirely on The Living Corpse, this nicely crafted 12-minute piece features Habib, Rehan (who had never seen a horror film before), historian Yasin Goreja, and director Sarfaraz discussing the genesis of the film, which Habib (also the producer) initiated with great difficulty.