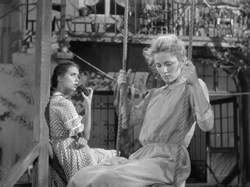 A filmmaker's filmmaker, German-born director Max Ophüls is now widely known as the master of the "infinite frame," in which he used a gliding mobile camera to pull off elaborate, elegant shots that made his films completely unlike anyone else's. Like many of his fellow European filmmakers, he moved to H 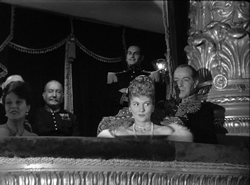 ollywood in the 1940s to tackle a wider world audience, and while the results weren't always up to par with his best work, few would dispute that he turned out at least one American masterpiece with Letter from an Unknown Woman. (For the record, his subsequent Caught and The Reckless Moment aren't slouches either.) Seen in retrospect, Unknown Woman -- ostensibly a romantic period piece but almost a fantasy film in attitude -- laid the visual groundwork for his final four masterpieces when he returned to France: La Ronde, Le Plaisir, The Earrings of Madame de..., and Lola Montes.

Once again exploiting her winning combination of girlish vulnerability and haughty elegance, Joan Fontaine (who enjoyed great success in Hitchock's Rebecca and Suspicion) stars as Lisa, a young girl who nurses a lifelong infatuation with Stefan (Jourdan, fresh off another Hitchcock film, The Paradine Case), an aspiring neighbor pianist whose performances are the highlight of her day. We first meet Stefan years later in 1900 Vienna as he prepares to flee from a challenge to a duel, only to receive a letter from Lisa detailing her encounters over the years with him. She followed him from her village to Vienna as a young woman and spent a magical night with him, only to be deserted; she later bore his child without his knowledge, and their lives continued to take strange turns with unexpectedly tragic consequences along the way.

In another director's hands, this film could have been u 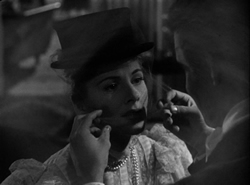 nbearably depressing; if you break it down event by event, it's possibly the least romantic story ever put on celluloid. However, Ophüls manages to give it a bewitching atmosphere thanks to a shimmering, magical portrayal of a fairy tale Austria, an artificial wonderland that could have only come from 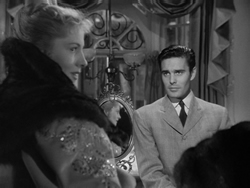 Hollywood. He even points this out explicitly in perhaps the film's most studied scene in which Stefan and Lisa sit in a train carriage at a tourist attraction in which a pedaling attendant spins backdrops of various geographical locations behind them. It's a sly commentary on both the fabricated nature of films and a bittersweet commentary on our heroine's romantic illusions, which the viewer already knows will most likely be dashed.

Though it wouldn't raise an eyebrow today, the film's subject matter was actually fairly extreme for the Production Code at the time, with the institution's head, Joseph Breen, stating in 1945 that the story was "unacceptable since it was a justification of sexual promiscuity." The script went through a number of changes before it finally went before the cameras, though of course the Catholic Legion of Decency still branded it as "morally objectionable in part for all." Times have certainly changed.

A perennial on TV and home video into the '80s (including a Criterion laserdisc), Letter from an Unknown Woman dropped out of circulation in the U.S. like many others that fell into the Republic Pictures library for one reason or another. A UCLA film restoration kept it on the repertory circuit, though truth be told, the 35mm prints still didn't look all that spectacular and showed definite signs of age-related deterioration. Meanwhile a couple of DVDs appeared in both France and Germany from reasonable masters, at least approximating the film's intended look but not delivering anything close to a knockout. Fortunately the 2012 Blu-Ray edition finally appeared from Olive Films, with a simultaneous DVD (but really, this is a film you should see in the highest resolution possible). It actually blows the UCLA restoration out of the water with a much finer gray scale and plenty of delicate textures completely lost in most prior versions. As usual for Olive, you won't find any meticulous digital cleanup here; instead it looks like a razor-sharp, mint film print unspooling in front of your eyes, and for a film asa dependent on visual impact as this one is, that can only be a good thing.