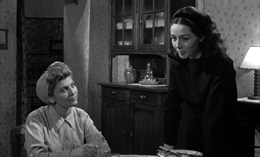 The drama of a man of the cloth and a woman of the world struggling with temptation has been a longtime staple of fiction for centuries, but it seems surprising as the subject matter chosen by French director Jean-Pierre Melville in between his more famous black and white crime classics, Bob le Flambeur and Le Doulos. This time he takes a time out from the world of gangsters and gamblers to focus on Barny (Hiroshima Mon Amour's Riva), a widowed mother in the village of St. Bernard during World War II. When the Nazis occupy the region, she becomes concerned for the welfare of her daughter, whose Jewish heritage could put her in immediate danger. Barny decides to seek aid from the handsome local priest (Breathless' Belmondo), whose consultations awaken conflicted feelings within them both. 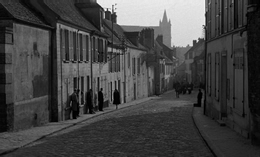 Subdued and very controlled, this film is mainly a showcase for its two stars; Belmondo in particular was rapidly ascending as a French superstar thanks to his Jean-Luc Godard films and would go on to work with Melville again on Le Doulos and the still-obscure Magnet of Doom, while the still-busy Riva would go on to an absolutely bizarre career including I Will Walk Like a Crazy Horse and Three Colors: Blue. Both of them do well with the tricky material, which constantly plays with the dangerous relationship between religion and politics with no easy answers in sight. The drama may seem to lead to an obvious conclusion, but Melville opts for ambiguity instead as Barny's grappling between her social views and her outlook on the role of religion begin to change as she interacts with the priest, an object of intended seduction for many women who never actually succeed. 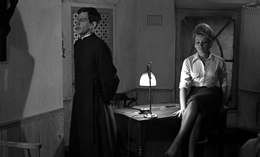 First released on DVD by the British Film Institute (now discontinued) and available with subtitles much earlier on VHS from Kino, Melville's film makes its Criterion debut on both DVD and Blu-Ray following a 2009 theatrical release. The Blu-Ray is obviously the way to go if you're so equipped; it's a perfect transfer as one would expect, with very impressive detail in the lingering, striking exterior wide shots of the village streets as well as the more subdued but also beautifully composed interiors. The optional English subtitles appear to be accurate, and the mono French soundtrack is uncompressed and sounds terrific (including the unusual, spare music by Martial Solal, jazz veteran and occasional soundtrack contributor (including Breathless). Extras include a brief five-minute TV appearance with Melville and Belmondo to promote the film's release, selected scene commentary by film writer Ginette Vincendeau with a focus on Melville's evolving career at the time, the theatrical trailer, a pair of deleted scenes from Melville's longer rough assembly, and a liner notes booklet including an essay on the film ("Life during Wartime") by Gary Indiana, a 1970 interview excerpt about the film from Melville on Melville with Rue Nogueira, including an anecdote about meeting Belmondo on the shoot of Vittorio de Sica's Two Women and his decision to cut the film drastically from its initial rough length of three hours. Criterion's track record for exceptional presentations of French classics is already impressive, and this is yet another jewel in their collection.