Though she does her job well enough, Sophie refuses to socialize with her employers or accept their aid; though she cannot read or drive, she instead turns to the local postmistress, Jeanne (Huppert), who enjoys snooping through the town's private letters. Jeanne and Sophie soon become inseparable, due in no small part to the fact that both were involved in mysterious deaths for which they may or may not have been responsible. Their resentment of the well-to-do family grows to the boiling point, leading to a chilling climax.

After years of well-received but largely overlooked art films, director Claude Chabrol experienced a dramatic career resurgence with this

razor-sharp adaptation of mystery writer Ruth Rendell's A Judgment in Stone (previously filmed with Ria Tushingham as the more linear The Housekeeper). Transposing the setting to provincial France, he also emphasized the Jeanne character to an equal status with the housekeeper to essentially create a variation on Jean Genet's classic melodrama, The Maids. (Director Todd Solondz must have noticed this, too, since he essentially remade this - slightly stretched to black comedy - as part of Storytelling.) Subtle and cunning, Chabrol's directorial tactics are matched with excellent performances from Bonnaire and Huppert as sisters in pathology. Bisset has less to do, but her beauty and marquee value pay off at the end as viewer expectations are flipped upside down. Simply put, this is one of the great, essential French thrillers

and holds its grip right until the haunting, open-ended closing titles.

Both DVD editions of La Cérémonie offer a solid anamoprhic transfer; the opening titles are deliberately overlit and appear somewhat bleached out, but the visual quality improves dramatically for the bulk of the film. Note that viewers with 16:9 monitors that don't automatically windowbox 1.66:1 transfers on the sides of the screen will notice a lot of awkward compositions as actors are constantly cut off at the hairline -- a common trait with most Mk2 anamoprhic transfers of Chabrol's films. Only the HOme Vision disc offers optional English subtitles, so that would be the only option for English-speaking viewers. Extras for the Home Vision edition include the theatrical trailer and a 20-minute making-of documentary containing interviews with the principals and footage of Chabrol shooting various outdoor driving scenes.

Due to an unfortunate set of circumstances, Claude Chabrol's moody thriller Cry of the Owl (Le cri du hibou) was largely ignored after its marginal US theatrical release. A specialist in the psychological suspense genre, 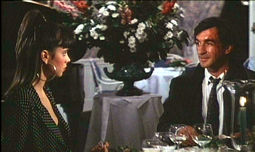 Chabrol has been mining into the darkest corners of the human psyche since the early days of the French New Wave, and this film continues the tradition. Many films have tried to ape Chabrol's style (most obviously With a Friend like Harry), but there's really only one original.

Estranged from his wife and finding solace in the countryside, morose draftsman Robert (Christophe Malavoy) discovers his voyeuristic side while lingering in the backyard of his beautiful neighbor, Juliette (Lifeforce's naked space vampire, Mathilda May). Much to his surprise, Juliette doesn't mind his Peeping Tom practices; in fact, she finds him a refreshing alternative to her boorish boyfriend, Patrick (Jacques Penot), and comes to regard Robert as death personified. Robert is less than amused, however, 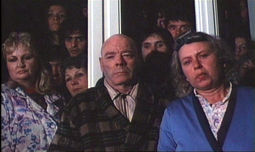 insisting he isn't death... and yet the Vichy countryside is soon populated with far more corpses than normal.

A clean, spare work of storytelling and filmic craftsmanship, Cry of the Owl seems like a film out of its time; you'd never guess it was a late 1980s title, so snugly does it fit with '60s Chabrol fare like This Man Must Die and Les Biches. The tricky narrative from a novel by Patricia Highsmith (The Talented Mr. Ripley) hums along with mechanized perfection, and all of the actors perform ably as pawns in this increasingly bewildering labyrinth of double crosses and murder. The oblique, haunting final shot - open and yet perfectly satisfying at the same time - perfectly sums up Charbol's approach, which suggests endless gulfs of emotional darkness yawning beneath all of his complacent characters. 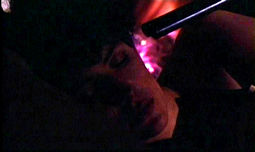 Though his work is fairly well represented in his homeland, Chabrol has not fared nearly so well outside of France. Though Cry of the Owl was released on UK home video and made the rounds elsewhere as a bootleg title, its American VHS plans were thwarted when New Yorker apparently dropped the ball and lost it due to a legal snafu. After languishing in obscurity for well over a decade, the film was recovered by AllDay, whose transfer looks about the same as the British edition. The non-anamorphic framing looks fine, though the image quality is dated and benefits from some darkness adjustment via television or DVD player. The English subtitles are non-removable. Along with a still gallery, the disc also includes a feature commentary by Ric Menello (with an extended cameo appearance by AllDay's David Kalat) which dissects both this film's tangled history and Chabrol's place in the French New Wave, the history of suspense directors, and the pantheon of great directors worldwide. It's an informative discussion and will probably be useful to both newcomers and seasoned fans alike.