One of those "dangerous" titles more often discussed than seen, Last House on Dead End Street first earned notoriety for an entry in Michael J. Weldon's The Psychotronic Encyclopedia of Film which prompted sleazehounds to seek out extremely scarce VHS tapes which haunted some of the more discerning mom and pop video shops. Sporting phony credits and murky cinematography which only added to its mystique, the film quickly became the stuff of gorehound lore with its infamous "deer foot" and involuntary surgery scenes earning it a lofty position in the pantheon of sick cinema. 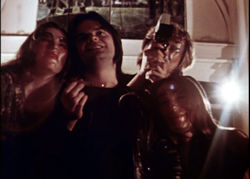 Designed like a student art film gone horribly wrong, the threadbare plot involves down and out criminal Terry Hawkins (played by director Roger Watkins under the name "Steven Morrison"), a jaded and venomous soul recently released from prison who lures some of his cohorts into filming bona fide snuff movies in an abandoned building after their sponsors, a bunch of rich decadents who enjoy a party with a woman in blackface, approve of Terry's audition film. Terry and company kidnap four unlucky souls and use them as cinematic guina pigs, all the while enacting strange rites for the camera involving Greek tragedy masks, power tools, animal limbs, and other niceties.

Like its spiritually twisted cousins (Bloodsucking Freaks and Pink Flamingos, to cite the most obvious examples), Last House feels like a mixture of guerilla horror and post-Warhol arty posturing, mixed with grindhouse porn aesthetics. The hopeless, despairing atmosphere which lingers over each scene becomes more oppressive with each mounting set piece, piling on one nasty surprise after another. Later films have certainly tried to top this in the shock department; by contemporary standards, Last House is fairly tame compared to the hardcore combinations of depraved sex and gore paraded in the following decades, though it's impossible to imagine how it got away with an R rating even in the more lenient '70s. What sets this film apart is the sense of immediacy and unflinching realism, creating the feeling of a sinister, odorous stranger breathing heavily down the back of your neck for an hour and a half. Prepare to have a bath running before you've ejected this disc. 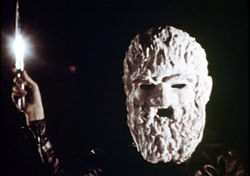 Much of the mystery and rumor surrounding Last House involved its tangled release history; though it hit drive-ins and grindhouses in 1977, the film was clearly made earlier (pre-Deep Throat, as this disc claims) and first appeared under the title The Fun House (no relation to the later Tobe Hooper film). Director "Victor Janos" later came forward to reveal himself as Roger Watkins, a film student who did some production work for Hammer, turned out several short films, and went on to direct a batch of hardcore porn titles. More than a few viewers speculated that not all of the film was faked, a pretty familiar tune to those familiar with '70s extreme cinema like Snuff. Indeed some of the effects are grueling to watch, but Watkins also displays a surprisingly gifted eye in numerous sequences. The final twenty minutes are the stuff of true nightmares, with the gritty film stock turning the tableaux of masked psychopaths into a hallucinatory spectacle like the unholy offspring of Derek Jarman and H.G. Lewis. The film's biggest drawback is the looped dialogue (it was actually dubbed twice, once without the director's blessing, as the liner notes helpfully explain); though the disembodied voices are fine once the mayhem gets underway, the technique is extremely distracting and amateurish during the protracted opening dialogue passages.

Last House's fan base has drawn some enthusiastic allies in horror cult circles, as evidenced by Barrel's lavish and often eye-opening double-disc set. From the colorful cover art by comic artist Stephen R. Bissette to the audio commentary with Watkins and Deep Red's Chas. Balun, this is definitely a fan's project and covers every bit of ground imaginable concerning this demented relic from an age gone by. Considering the film was shot for zero money with fluctuating lighting conditions on questionable stock, this transfer is more than acceptable; compared to the previous video versions, however, it's a godsend. The contrast and colors are finally under control and look like actual film, mastered from a solid 35mm print. Scratches and flaws appear regularly, but if you like your rough and nasty movies to look that way, too, you'll be pleased. The mostly dark final scenes are now finally legible and pack more of a creepy punch, while the audio is, well, as canned and hissy as it always was. (Watkins claims the original dialogue tracks were looped in off a tape recorder, so one can only imagine what that must have sounded like.) The print also incorporates the notorious 91 seconds of dismembering and disembowling during the surgery scene at the one hour mark; it's a particularly nasty piece of film which earlier turned up on one of the Sun Classics VHS versions (the source used here, looking dupey but passable). 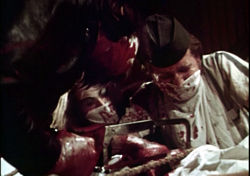 Disc one includes the film itself and the aforementioned commentary, which covers everything from the film's creation through the tortuous process which led from the three hour original version (Cuckoo Clocks of Hell), now lost, to the version we know today. Balun and Watkins have a good time recalling the making of the film, which Watkins offering several amusing recollections about audience responses throughout the film. Also included are eighteen minutes of the surviving silent outtakes, including a farmhouse prologue and several dialogue scenes, as well as the alternate Fun House opening and closing credits, a creepy Suspiria-style trailer (which is sourced from a ragged VHS and looks more like a TV spot), and a Necrophagia tribute video, "They Dwell Beneath," directed by Jim Van Bebber. A black and white 1975 segment from The Joe Franklin Show features Watkins and actor Paul Jensen talking to the familiar and affable local talk show host; it's fascinating and more than a little melancholy to see Watkins happily rattling off his cinematic idols and 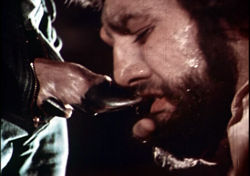 waxing optimistic over the fate of his cinematic baby, unaware of what fate had in store. The DVD rounds off with a one-hour radio interview from 1973 (on a third audio track during the film) which finds Watkins and actor Ken Fisher promoting their film again, discussing the difficulties of financing and releasing what was amounting to an uphill battle. The final goodie is an extensive gallery of promotional and production stills, ranging from Watkins' scrapbook shots of his trip to England (where he met Freddie Francis and visited Hammer Studios) to the film's various theatrical and VHS incarnations.

On we move to disc two, which packs in four short Watkins short films: "Ron Rico," "Requiem," "Masque of the Red Death," and "Black Snow." (The booklet mentions a fifth film, "Amputee Grand Prix," which was apparently withdrawn for legal reasons.) All are presented silent, but the first two films offer some evocative moments involving landscapes and church interiors which foreshadow the tone of Last House. "Masque" is easily the oddest, with two kids being chased in a basement by a guy in a Halloween mask. The real gorilla of the second disc is "At Home with Terry Hawkins," a 75-minute "telephone diary" consisting of various recorded calls from the project's conception through its completion. A fascinating document of the underground filmmaker ethic, this verbal journal ranges from the humorous (one actress learning at the last minute of her bathtub scene coming up that evening) to the downright nerve-shredding. The final and perhaps oddest piece is "5-25-88," a videotape fragment running about 20 minutes. Apparently all that remains of an abandoned Watkins documentary, this strangely bleak "day in the life" follows the director from morning through a trip to a graveyard to his daily rituals at home.

Another decked supplement unto itself is the booklet (a whopping 36 pages), in which Headpress editor David Kerekes discusses his own fascination with the film and interviews several of the principals including Ken Fisher (who plays Ken the sidekick and discusses the largely discarded slaughterhouse opening in icky detail), Ken Rouse (the hunchback), and Steve Sweet (the deer hoof guy). Paul M. Jensen, the writer and professor who appears briefly in the film, also provides his reminiscences about the shooting, which by all accounts went far from smoothly. As with the discs themselves, this is a valuable crash course in filmmaking as well as a tribute to a film few have seen but none will forget. An Easter Egg transfer of an HD scan of the film's uncut theatrical version can also be found on Vinegar Syndrome's Blu-ray release of Watkins' Corruption.