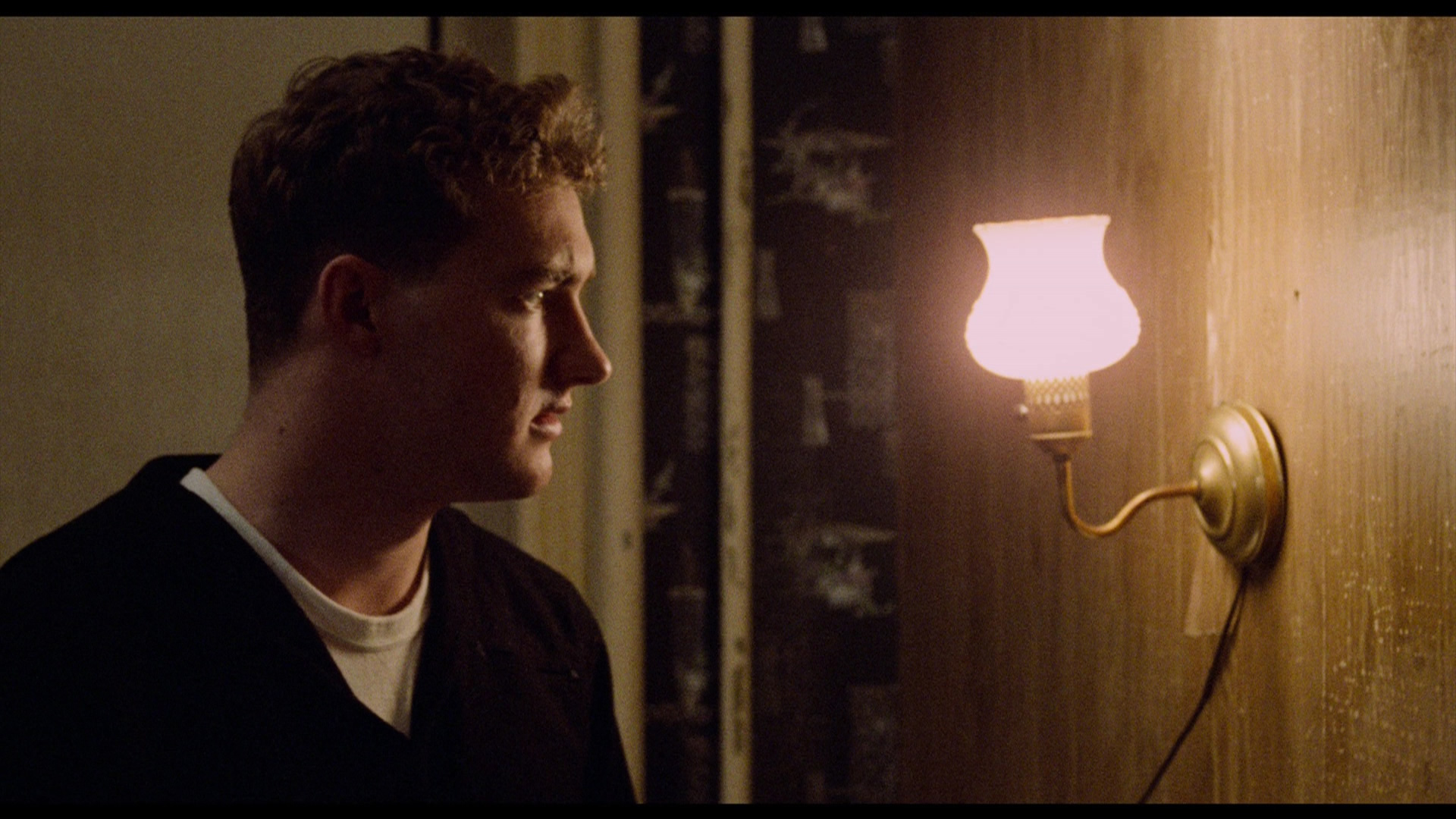 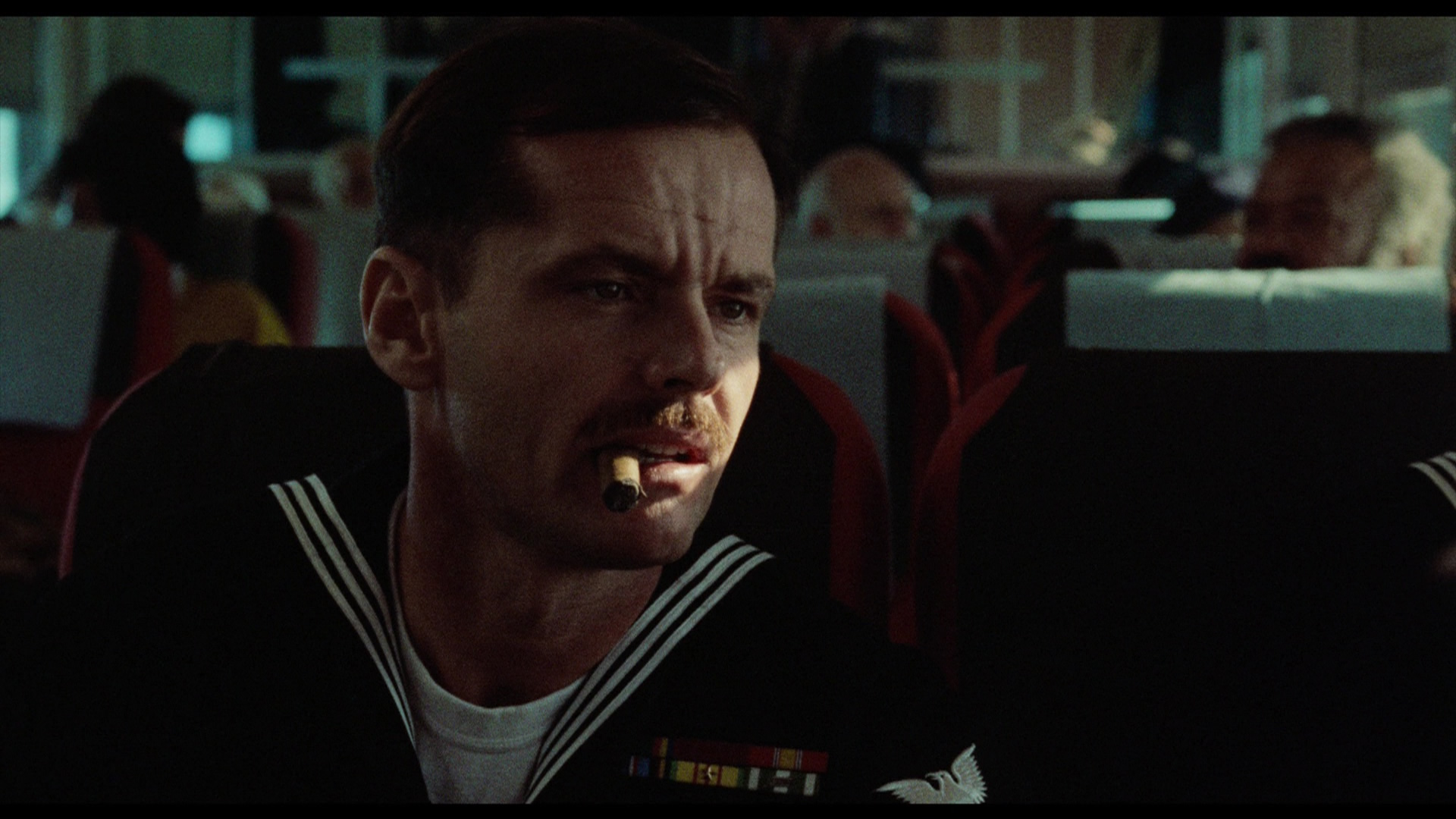 Long before Scarface and The Wolf of Wall Street set new records for movie profanity, one film shattered the limits of what the recently liberated MPAA would allow characters to say: The Last Detail. Fortunately it was so well done and successful (complete with three Oscar nominations) that few moviegoers were actually offended, and it turned out to be another feather in the cap of director Hal Ashby, a former editor turned director coming off of the acclaimed but hardly lucrative Harold and Maude and The Landlord. This film managed to kick his career into high gear, which lasted through the rest of the decade with Shampoo, Bound for Glory, Coming Home, and Being There before it all went flying off the rails.

While waiting for their orders in Norfolk, naval officers "Badass" Buddusky (Nicholson) and "Mule" Mulhall (Young) are given the task of taking a short patrol assignment to escort a younger, much less experienced sailor, Larry Meadows (Quaid), to naval prison in Maine for the crime of stealing money from a charity's collection box. With their new charge facing an arduous eight-year stint behind bars, Buddusky and Mulhall find their initial annoyance soon growing to affection for Larry as they decide to give him a chance to savor some youthful indulgences along the way. The tour through several Northeastern cities turns into an unforgettable rite of passage of sorts for everyone involved. 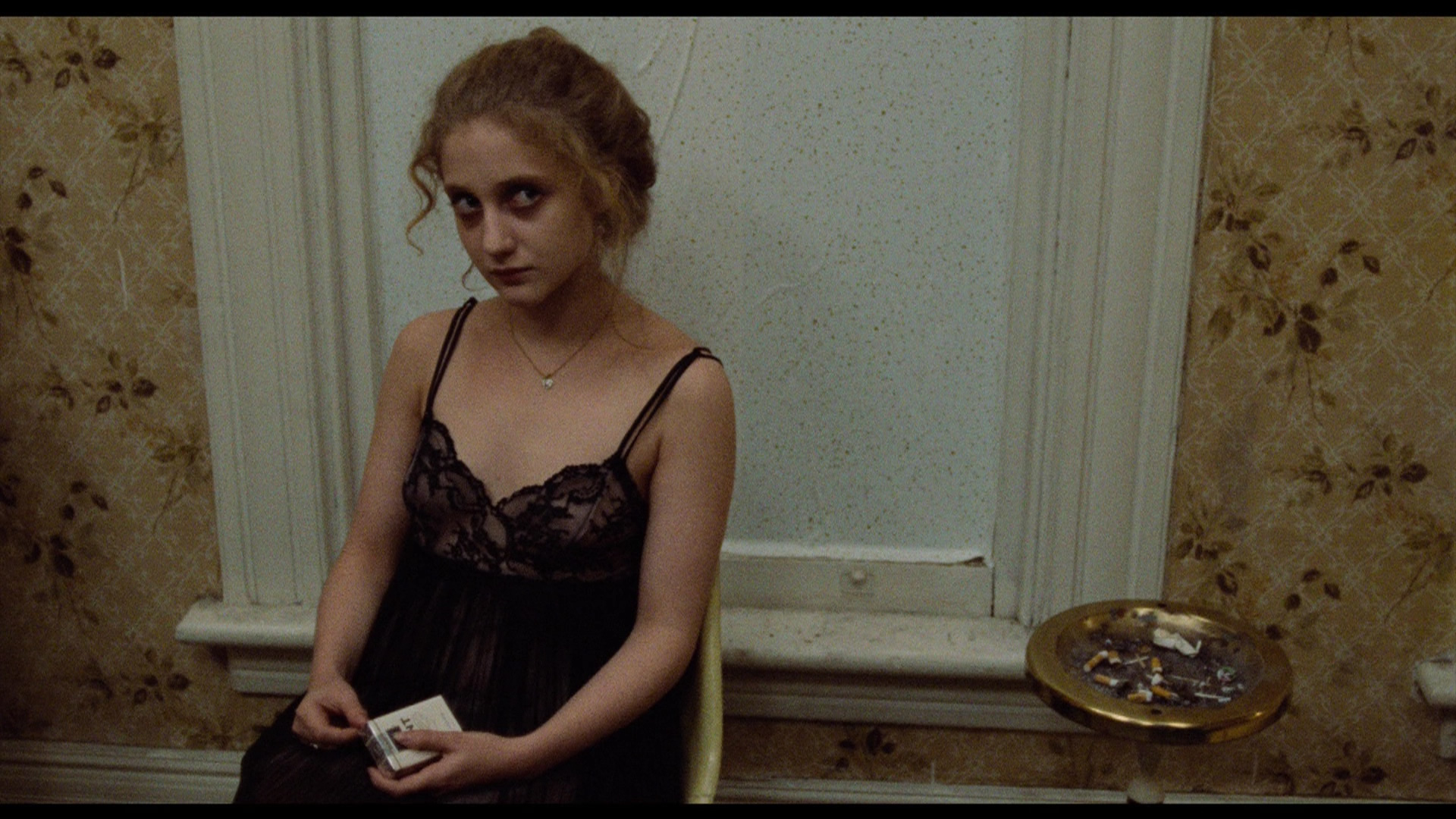 An actors' showcase if there ever was one, The Last Detail really allows its three leads to sink their teeth into some juicy, hilariously profane dialogue, with Nicholson in particular ratcheting up the likable rogue persona he'd been cultivating on and off since his Easy Rider breakthrough. Ashby's knack for blending comedy and drama so skillfully really pays off here with a string of picaresque adventures that grow more emotionally conflicted and troubling as the film goes along, leading to a resolution that leaves the viewer filling in the blanks of what might happen next. (In fact, Darryl Ponicsan, author of the source 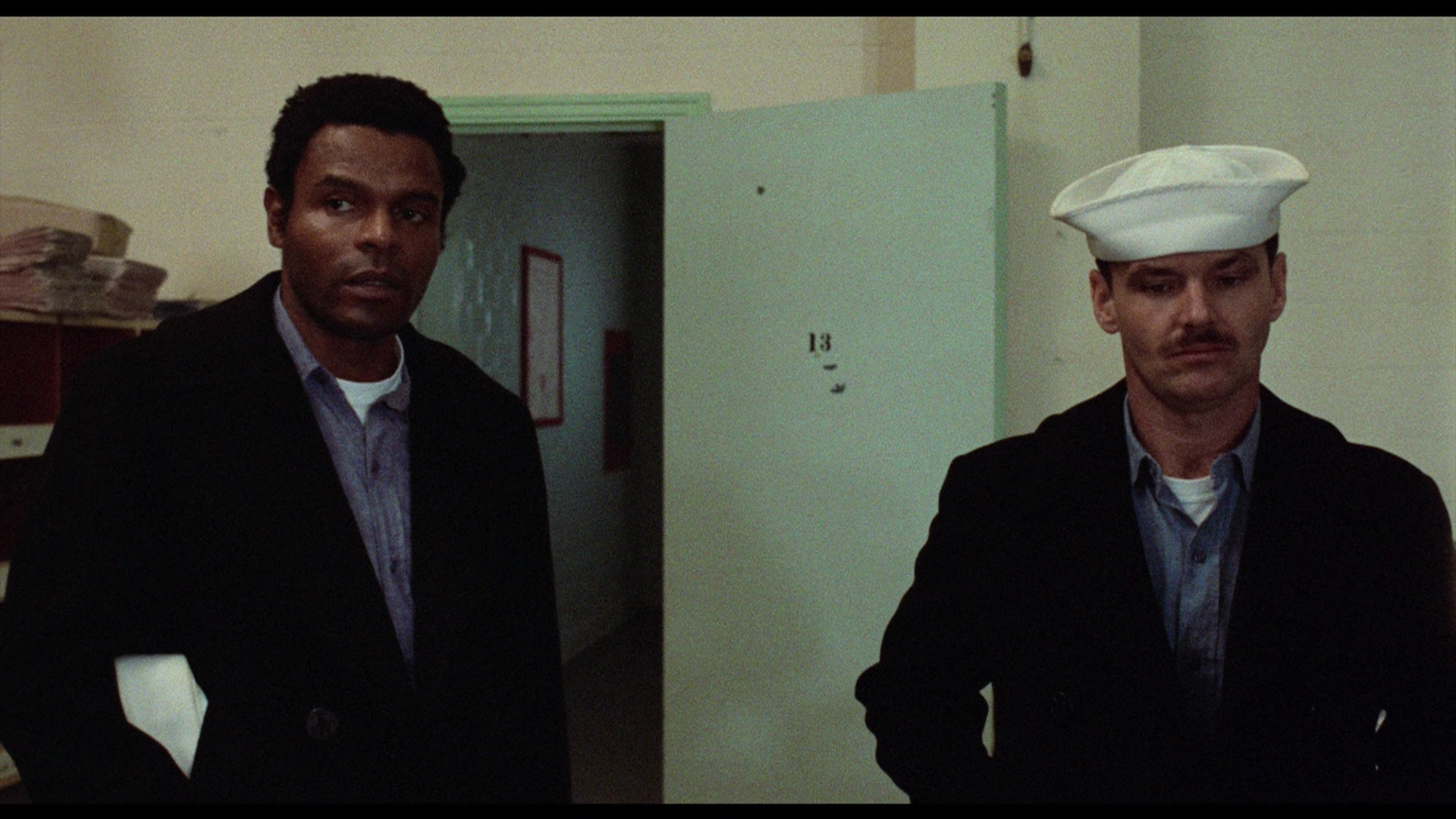 novel, did write a sequel, Last Flag Flying, which is being adapted by Richard Linklater with Bryan Cranston stepping into the Buddusky role.) The film also offers some sturdy supporting roles for a few unexpected participants including a young Carol Kane (who plays a key role in bringing Larry to manhood), James Bond sheriff Clifton James, Roger Corman staple Luana Anders, and a small but potent bit for Larry Cohen star Michael Moriarty at the end.

Available in pretty much every home video format imaginable over the years from Columbia and its eventual owner Sony, The Last Detail premiered on Blu-ray from Twilight Time in 2016, featuring a typically crisp HD transfer from Sony (retaining the film's original rough, gritty appearance), an isolated score track (for Johnny Mandel's mostly wallpaper music including various military fanfares and other source music), the theatrical trailer, 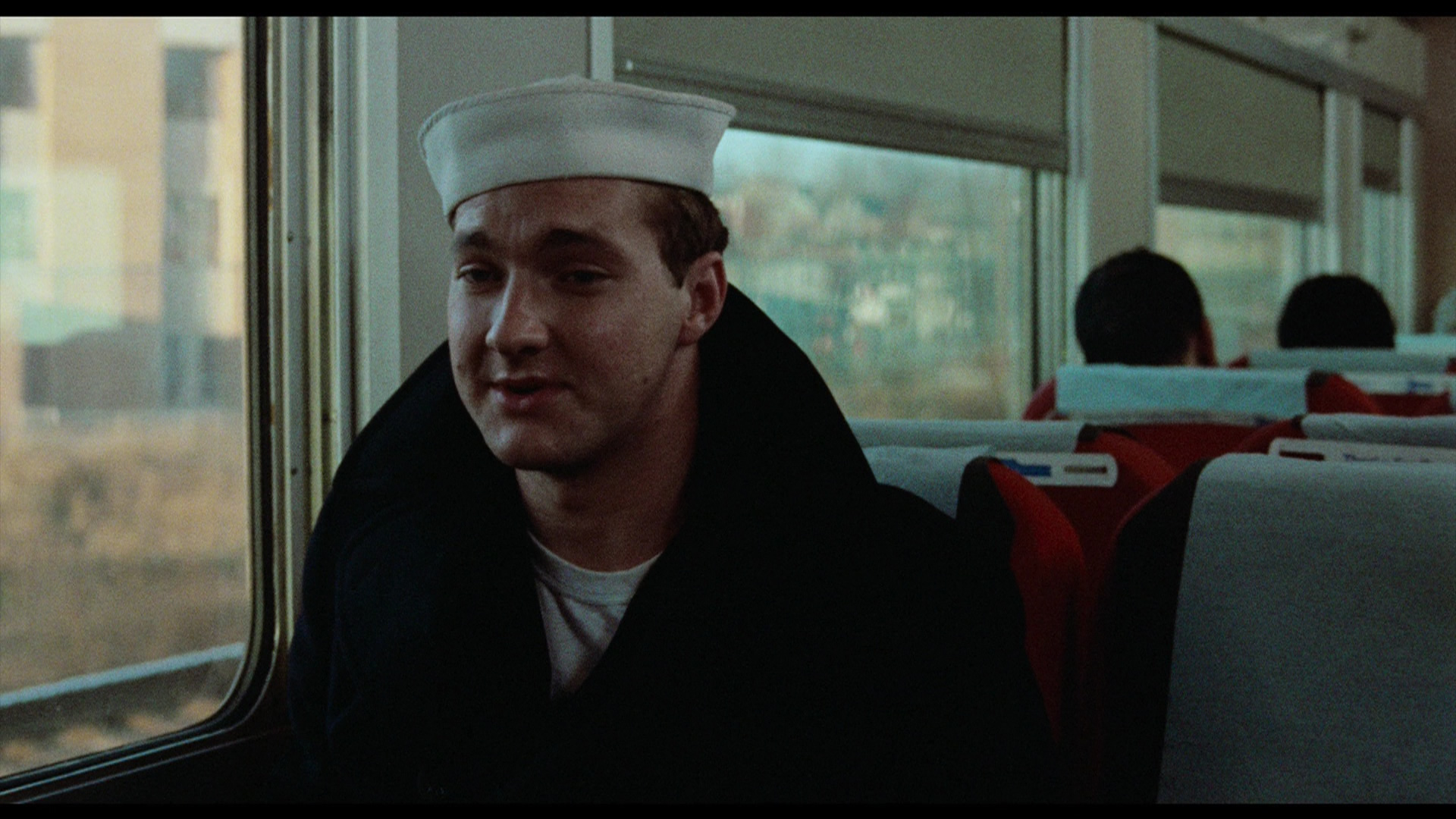 and a liner notes booklet by Julie Kirgo. The 2017 UK edition from Indicator goes several steps beyond, featuring the same excellent transfer (with identical black levels, a rarity for Sony titles crossing the pond) and the same good LPCM English mono track with optional English subtitles, plus the trailer.

The most astonishing new extra by far is the 95-minute TV broadcast cut, which twists itself into knots to reloop the dialogue to make it palatable for a mainstream audience. (Needless to say, anyone who can lip read was probably taken pretty aback anyway.) Filmmaker Alexander Payne appears for a 5-minute intro reading out some adapted program notes he wrote years before about this, one of his favorite films, covering Ashby's peak period after getting his break into directing via Norman Jewison. Cinematographer Michael Chapman also gets a brief (just under 4 mins.) recollection about the film and trying to make it look "like the 11 o' clock news," and Payne returns for the much longer (17 mins.) "About a Trip" going into more detail about his admiration for Ashby and this "dirty" masterpiece of concision in particular (that he was too young to see when it opened). The 20-minute "A Search for Truth" gives editor Robert C. Jones a 20-minute showcase to talk about his admiration for the film's style and its reliance on master shots, including the effective drunk carousing scene, as well as the much longer original rough cut that came in at a whopping four and a half hours! A gallery of stills and promotional art rounds out the disc portion of the extras, and a liner notes booklet featuring an enjoyable "Badass Blues" essay by Michael Pattison (including an interesting reading of the ending), and extensive notes by Jeff Billington about the TV cut and how it cleverly but ultimately destructively sapped out the profane nature of the original film.