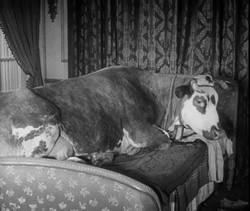 The uneasy social tension between natural sexual urges and civil authority has provided ammunition for a lot of filmmakers, but none knew how to exploit it better than the greatest of all surrealist filmmakers, Luis Bunuel. His later color films like Belle de jour and The Phantom of Liberty thrive on tweaking audiences' libidos with a wonderfully subversive sense of humor, but perhaps the most audacious statment in this arena came at the beginning of the director's career with his first feature, L'Age d'Or. In 1930, he and his collaborator, famed surrealist painter Salvador Dali, had caused an international stir with their graphic and unforgettable short film, "Un Chien Andalou," and were poised to take their philosophy one step further. The end result proved so inflammatory that the French government ordered the film to be banned immediately, with all prints destroyed. Fortunately the negative survived, and a full-scale restoration in 1960 ensured it would survive long after the governmental forces that tried to suppress it. 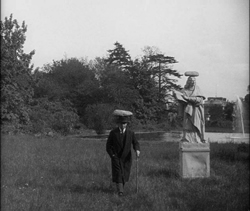 Not surprisingly, the feature itself (which barely clocks in over an hour) is fragmentary in nature and, after an opening sequence comprised of documentary footage about scorpions, follows the irrational urges of a man (Modot) and woman (Lys) whose constant need to make love everywhere from a puddle of mud to a high society party is thwarted by the powers that be. Along the way they (and the viewer) are confronted by a cow in a bed, blind people, a kitchen inferno, toilet jokes, the Catholic Church, and the man's humanitarian mission leader. The film itself is actually a lot less linear than it sounds as arbitary bits of surrealistic shenanigans disrupt the proceedings at every turn, including a Sadean final chapter that had church leaders spitting nails when they saw it. 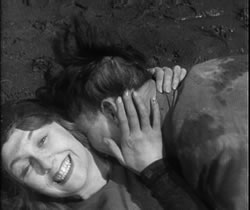 Bunuel and Dali (who had far less involvement with the feature) parted ways after the stormy reception of this film, which was mostly buried for decades despite its worldwide infamy. Surprisingly, many of the trademarks of the former's films are already fully formed here: the anti-clerical humor, the bourgeois garden party in which propriety rules under the most absurd of circumstances, and shocking sexual fetishism, in this case a fascination for human digits that climaxes in the infamous sequence with Lys sucking on a statue's toes. Seen today it's still surprisingly strong stuff and definitely relevant in today's politically-charged times; in fact, the religious right would probably react even more viciously to this film than French officials if they actually knew it existed and tried to understand what it was saying.

The first DVD of L'Age d'Or appeared from Kino, derived from the 1995 restored negative in France but taken from a PAL master; it also features a gallery and a selected audio commentary by scholar Robert Short that covers about half the film, offering some interesting readings of the film that may be either fascinating or silly depending on one's mood. It's a nice accompaniment though and definitely worth a listen. Far more thorough is the BFI's dual format Blu-Ray and DVD release, with the former containing a surprisingly crisp and impressive 1080p transfer in the original aspect ratio of 1.19:1. The opening few minutes of scoprion footage still look pretty awful, given the fact that it's all stock footage to begin with, but the rest of the film is in terrific shape; some minor wear and tear is to be expected given the film's vintage, but it's hard to imagine anyone being less than impressed at the presentation here of a film whose existence was once in grave danger. The Short commentary is carried over here. 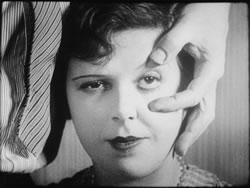 One very welcome addition only on the BFI release is the earlier "Un Chien Andalou," which is only available in America as a separate, sorry-looking DVD release. This HD version is significantly better (though still limited to the imperfections found in the initial restoration of the film, also done in 1960). The familiar tango-style score is included along with a new one by the UK's Mordant Music, which is far more experimental and abrasive but somehow appropriate if you want to watch it as a twisted black comedy/horror film. Short also provides a full commentary for "Andalou," talking about its groundbreaking shock value and the surrealist tropes found in each of its brief segments. The DVD version also contains two exclusive standard def extras: a 25-minute Short video intro and the excellent 99-minute documentary, A Proposito de Bunuel from 2000, which lays out the trajectory of his amazing career and should be enough to send newcomers scrambling out to snatch up more of his films on DVD. The illustrated booklet contains liner notes by Short, the original surrealist manifesto written about the film following its banning, Bu�uel's written thoughts on making it, and a Bunuel bio by Michael Brooke. Even more than 80 years later, there's never been anything quite like this one.