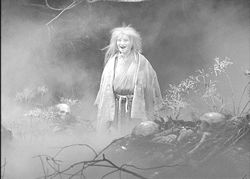 dismissed as a film sandwiched between his two undisputed masterpieces, Seven Samurai and The Hidden Fortress. Perhaps the darker, more vicious tone and leaner running time make this film seem less "universal" than its companion features, but this dazzling Japanese twist on Macbeth shows the master filmmaker working at the peak of his cinematic powers and features set pieces as striking as anything he ever created. It's also the closest thing to a pure horror film in the Kurosawa catalog, which makes it especially worthy of a look.

Following a successful battle, celebrated soldiers Taketori Washizu (Toshirô Mifune) and Yoshiteru Miki (monster movie regular Akira Kubo) wander into a forbidding forest, where a weaving woman with flowing white hair portends that both men will become tremendously successful. Spurred on by his ambitious wife (Yojimbo's Isuzu Yamada), Washizu plots to kill the Emperor and usurp his throne, laying blame for the spearing death on the bloody hands of two framed guards. Ensconced in Spiderweb Castle with his lust for power growing, Washizu begins to lose his grasp on reality and slaughters both his enemies and friends before a cataclysmic showdown of armies. 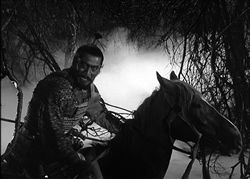 Beautifully atmospheric with images similar to the Italian gothic horrors of the 1960s, Throne of Blood draws influences from Japanese art, medieval army culture, and Elizabethan theater, creating a wholly unique film which combines Kurosawa's exceptional epic skills with an intimate, terrifying story of human greed and destruction. The humorous or sympathetic Mifune seen in other Kurosawa films is nowhere to be found here; instead we get a grimacing mad dog, intent on climbing up the feudal ladder with an ever increasing amount of blood on his hands. Yamada's character isn't as forceful as the traditional Lady Macbeth -- perhaps due to cultural restraints, but Kurosawa presented far more ferocious women in Ran. Here she's more pathetic and insane, though her variation on the familiar "Out! Out, damned spot" mad scene is memorably performed. Like Roman Polanski after him, Kurosawa smudges the play's already precarious line between good and evil by making its nominal hero, Miki/Macduff, equally corruptible: tolerant of violence at his best and horrifically vengeful at his worst. The gruesome and intense finale still packs punch (even De Palma couldn't quite surpass it in Scarface), with a flurry of arrows gory and impressive enough to make Tom Savini stop in his tracks. 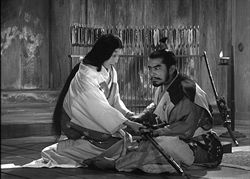 As with Kurosawa's other black and white output, the original elements of Throne of Blood contain some inherent imperfections (grain and the occasional blemish) which will be obvious to those with a taste for digital perfection. That said, Criterion's Throne of Blood is a sharp-looking piece of work, with beautiful gradation during the night scenes. The foggy opening sequence may not look promising at first, but once the film proper begins, this Throne has never looked better. The optional English subtitles are well paced and always legible, with not one but two different translations courtesy of Japanese-film translator Linda Hoaglund and Kurosawa expert Donald Richie. Japanese cinema scholar Michael Jeck contributes an informative commentary track; though it stays on the rehearsed and dry side, the track dispenses countless useful bits of information including a detailed study of the Japanese theatre tradition's influence on the deliberately exaggerated acting styles. The package is rounded off with the original Japanese trailer (which spoils most of the highlights) and a text essay by Stephen Prince, who offers an overview of the film's various cultural influences.

Two companion films by Japan's most famous and revered director, the late and sorely missed Akira Kurosawa, have been given the Criterion treatment following their previous, out of print incarnations on laserdisc. Following decades of lavish critical attention, many audiences today have forgotten that, as the most "Western" of Japan's filmmakers, Kurosawa truly excelled at action films, and this remarkable double feature shows him at his sword-slicing best.

Sanjuro (Mifune), a masterless wandering samurai, arrives at a desolate village which, according to the local innkeeper, is controlled by two ruthless rival gangsters.

Spotting an opportunity to achieve financial gain for himself and to cleanse the town from this "human pollution," he offers his services as a skilled swordsman to both sides and plays them off each other until the feuding numbers dwindle to virtually nothing. One gangster's son, Unosuke, arrives with a fancy new invention, a revolver. Unosuke kills off many of his family's adversaries and invokes Sanjuro's wrath by beating him for reuniting a kidnapped woman with her husband and son. To stop Unosuke's evil rampage, Sanjuro finds he must now use his wits instead of his sword.

Extremely popular and widely acknowledged as one of Akira Kurosawa's finest films, Yojimbo has no difficulty living up to its reputation.

Like many key Kurosawa titles (Seven Samurai, The Hidden Fortress), this was remade as a hit film for English speaking audiences in another genre, Sergio Leone's A Fistful of Dollars (and more recently by Walter Hill as Last Man Standing). Ironically, while Toho wound up getting a 15% cut of the profits from Fistful for lifting entire scenes and shots from Yojimbo, no one bothered to point that Kurosawa himself had swiped the entire plot from Dashiell Hammett's first novel, Red Harvest, in which the Continental Op pits two small time crime families against each other in a midwestern town. Controversy aside, Yojimbo is an extremely witty, fast-paced film and deservedly caught on outside its native country.

The Criterion DVD is a mostly satisfying presentation culled from the same master print used for the laserdisc. Though not quite as gorgeous as the terrible packaging claims, the print is mostly in good shape aside from the ratty looking American credits (complete with the alternate U.S. title, The Bodyguard). Though the image conveys the essentials of the imaginative scope compositions, the original 2.35:1 framing has been pulled out to around 2.10:1, lopping off portions of some actors arranged at the edges of the frame. This doesn't affect the action sequences, however, and appears to be the only version Toho was willing to supply. Contrast and image quality are quite satisfying, however, given the condition of the print. The optional white English subtitles are placed below the frame; however, they're a little small for comfort and could cause serious eyestrain on an average size television. A simultaneous overseas DVD release from Mei Ah features larger English subtitles and a somewhat different transfer. The Criterion DVD also includes the original Japanese trailer with some amusing hyperbolic subtitles.

Following the success of Yojimbo, Kurosawa reworked his next script into another vehicle for Mifune's wily swordsman. The result, Sanjuro, features a protagonist with the same name but otherwise feels like quite a different film. Nine young samurai neophytes determine that their town has become overrun with corruption following the abduction of their Chamberlain (Yunosuke Ito).

They enlist the aid of Sanjuro and are immediately underwhelmed by his uncouth behavior and lack of respect for authority. However, as most viewers could easily figure out, Sanjuro still clings to the moral foundations of the "honorable" Japan and hides these qualities beneath his shaggy exterior. While Yojimbo had more than its share of humorous and ironic moments, Sanjuro revels in them; the Chamberlain's pacifist wife and daughter constantly urge the ragtag army to avoid unnecessary violence and spare as many lives as possible, leading to some humorous complications during the battle scenes. Of course, Sanjuro eventually realizes that the women are correct, a nice little jab at the standard notions in Japanese society. From this perspective, Sanjuro would have been a fascinating viewing experience with a progressive 1960s audience. In particular, the social commentary which usually runs throughout Kurosawa's work takes a skewed and particularly delightful front seat here, with the idealistic youths constantly trying to come to grips with an elder who sometimes appears to be out of his mind. Though comical and handled with an astonishing degree of filmmaking skill, the swordplay and bloodshed become surprisngly graphic at times, with a finale that wouldn't be out of place in one of the '70s Lone Wolf and Cub epics.

Criterion's DVD looks very similar to the Yojimbo presentation and shares its mild flaws: a nice but less than pristine print, U.S. opening credits, marginally inaccurate framing, and lousy packaging. However, like its predecessor, this is probably as good as U.S. audiences are going to see it, and any Kurosawa films coming to American DVD letterboxed and with optional subtitles are definitely a cause for celebration. The subtitled Japanese trailer is just as amusing as the one for Yojimbo. Often overlooked in the shadow of sprawling masterpieces like Seven Samurai and Ran, both of these films are essential parts of any world cinema collection and make a fine, entertaining introduction for those unfamiliar with one of the cinema's great visionary masters.