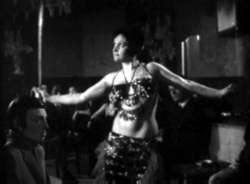 Touted as an early example of a Turkish variation on the popular Italian giallo, the atmospheric and wonderfully entertaining Kadin Düsmani ("Woman Despiser") actually betrays a host of influences, such as the popular ooga-booga Edgar Wallace chillers pouring out of Germany and Italian gothic/giallo hybrids around the same time like The Embalmer. The film wastes no time at all as it kicks off with two back-to-back stalk and kill scenes, both involving young women who are murdered by a psycho with a penchant for devil or skull Halloween masks 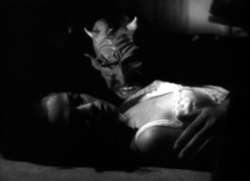 and creepy rubber claws. The police opine that the lunatic is a necrophile who rapes his victims after killing them and only goes after women who "seem happy" ("because he doesn't have a lover"). The investigator in charge (Bora) deduces that the murderer's methodology is linked by the fact that victims' first initials are the same as the districts in which they were killed, so he's obviously sending some kind of message. He also strikes up a romance with a beautiful young widow who might be connected to the case (her ridiculously convoluted backstory gets rattled off in the first ten minutes), after which they take in a nightclub show where a pre-Succubus exotic dancer does a routine with a sword and a mannequin. Pretty much every man connected to the dead women becomes a suspect, including a rich ne'er-do-well and a sinister sculptor, while the percussive music score and increasingly senseless story build up, as these things often do, to a frenzied finale with our heroine pitted against the mask-wearing loony in an abadoned mansion festooned with cobwebs, wrapped up with a flashback-studded explanation of why it all happened. Other peculiar characters are on hand, too, with the detective's scene-stealing sister offering the most eccentric, perverse interlude in the entire film.

Though not as extreme as some of its Italian counterparts like Blood and Black Lace, this Turkish competitor does its best to irritate the censors with virtually every female character stripping down to her lingerie (or even further without actually showing much), all tied in directly to brutal murder scenes. There's even a jolting stabbing scene midway through that anticipates the unicorn killing in Black Christmas! Oddly enough, given this approach and the film's title, it's really too exaggerated and luried to be really offensive, with one delightfully pandering scene after another ensuring that no audience member will dare to even take a bathroom break. 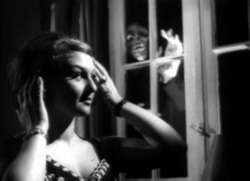 Onar's upward climb in transfer quality continues with this film, possibly the best-looking effort yet. Gone are the days of murky transfers from tape sources; this was lifted from the lone surviving print and, apart from the contrast-pumped opening credits, it's surprisingly good. Yes, there's the usual print damage and miscellaneous debris (this is still an obscure Turkish film, after all), but even viewed on a 65" screen it holds up quite solidly. As usual, subtitles are offering in either English or Greek, and the disc comes in a limited 500-unit run.

Of course, it wouldn't be an Onar release without some nice extras, and here you get part three of their "Turkish Fantastic Cinema" featurettes, this time focusing on science fiction with a little lip service to horror thrown in for good measure. The usual suspects like the Turkish variations on Star Trek, Young Frankenstein, Superman and E.T. are well-represented here, but the real kicker is when Canan Perver, the now-gorgeous actress who played the child lead in Seytan (the unbelievable Exorcist imitation), shows up near the end with memories of shooting the film. Other goodies include an image gallery, the usual informative bios for Bora and director Ilhan Engin, and a trailer the tasty-looking new Onar acquisiton, Altin Cocuk, along with The Serpent's Tale, Casus Kiran and Kizil Tug. A pretty sweet deal all around, actually; check out the Onar site directly to buy this puppy before it runs out.