During the 1970s and early 1980s, paperback shelves were consumed with pseudonymous sexy memoirs written by independent women about how they became globe-hopping sexual animals, mostly inspired by the combined success of Emmanuelle (by "Emmanuelle Arsan"), Erica Jong's Fear of Flying, and Story of O by "Pauline Raege." (Hint: only one of those people was female and actually wrote a book.) One of the more successful of these was Joy, the "autobiographical" story of Joy Laurey, a model whose exploits inspired numerous self-penned sequels. Naturally it was just a matter of time before someone decided to turn Joy into a film during the waning days of theatrical erotica when home video and cable TV were about to take over the market. Surprisingly, the director chosen for the French/Canadian project was Sergio Bergonzelli (credited here as "Serge Bergon"), best known for his nutty giallo In the Folds of the Flesh and occasional sexploitation offerings like Apocalipsis Sexual and Eros Hotel. A casting search for the next big sexpot led to the selection of Claudia Udy, a Canadian-raised American actress who had just appeared in two low-rent Candian horror films, Skullduggery and American Nightmare.

Looking like a hybrid between Paris Hilton and Jennifer Grey, Udy may not have been the most experienced thespian in the world, but she managed to carry the film through its extremely slender storyline thanks to her obvious willingness to do just about anything in front of a camera. After breaking up with her boyfriend who apparently only liked to make love in front of fireplaces, our heroine Joy decides that she has to find Mr. Right, so despite the fact that she apparently has terrible, terrible, terrible taste in men, she sleeps her way through a string of possible partners. Along the way she appears in a fashion show packed with lasers and dry ice, serves as a muse and sort of producer for a rock artist, does a photo shoot at the beach, stars in a ridiculous action movie for a man named George Miller(!), dry humps a big oak tree, and thinks she's fallen in love with Marc (The Blood Rose's Huart), an older slimeball who calls her a slut and takes her to a sex club called the Temple of Women where he forces her to service five men at once. Though it looks like this story's heading to an ending straight out of Looking for Mr. Goodbar, a last-minute phone call gives her a personal epiphany that might set Joy on the right track.

Obviously modeled after Emmanuelle, this is fairly typical late-night cable fare in terms of erotic content but sheer nirvana for fans of '80s kitsch. Neon, smoke, outrageous hair, Dayglo outfits, and warbling electronic music (including an oft-played theme song by "Debbie Davis") turn this into a pop culture feast, and it moves at a surprisingly brisk pace considering the inflated running time. Bergonzelli pulls off a few interesting stylish flourishes, mainly through the manipulation of sudden changes in lighting to reflect Joy's altering state of mind (including a simple but nifty trick involving a chandelier and a bed in the final act).

Joy became a reasonable international success but was surprisingly ignored in America, where it was shuffled off in an edited, dubbed version to VHS by Private Screenings after a couple of discreet Cinemax airings. Severin's DVD marks the first chance most English-speaking viewers will have to see the film; thankfully this also represents the complete, French-language cut with some of the more intense censored bits put back in, mainly during the climactic Temple of Women scene and a sublimely silly, skin-packed sequence involving a Tantric sex encounter group where the lovers have been holding it in for up to a year and start howling like dying coyotes when they finally get their hands on each other. The French dialogue track sounds fine and comes with optional English subtitles, which prove invaluable in scenes like the one where a sleazy photographer uses women's butt cheeks as targets when playing pool and gets his models to line up spread-eagled by shouting, "You know the drill, you little sluts." ("Yeah, sounds fun!" they reply.) The anamorphic 1.85:1 transfer looks fine; it's obviously a fresh overhaul from film and does its best with the often smoky, stylized appearance of the film. The only extra is a new 11-minute interview with the very skinny Udy entitled "Reflections of Joy" in which she recalls being cast in the film, her working relationship with Bergonzelli, showing the script off to her father, and the international fracas surrounding its opening. 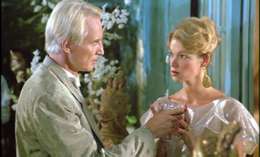 One thing Udy doesn't discuss in the featurette is why neither she nor the director returned for the sequel that appeared two years later with an entirely French cast and crew. This time the lead role went to Brigitte Lahaie, the '70s porn goddess who became a major cult figure after going legit for directors as diverse as Jess Franco (Faceless), Jean Rollin (Fascination), and Phillip Kaufman (Henry & June). Apparently not learning her lesson from the first film, Joy has just split with her unfaithful boyfriend, Marc (Maurel), who calls her a slut and says he can take her or leave her. He chooses the latter by jetting off to Thailand, and for some arbitrary reason Joy decides to follow him by snagging an air fare with her older friend Bruce (Londiche), a very strange guy who likes to lick her toes when she gets out of the bubble bath. He decides to celebrate her birthday and declare his love for her by throwing a swanky nocturnal bash where he offers a bowl of 9,137 fancy pearls ("to make up for every day I've lived without you") and slips a mickey in her drink, after which she's splayed out semi-conscious on a divan where all the party guests take turns on her while surrounded by ballerinas. "I'll give you a lot of pleasure through other people," he explains the next day as justification for what amounts to the most extreme case of date rape in history, not to mention one of the worst birthday parties. When she tries to run, Joy winds up hauled back to the house and becomes a virtual prisoner where she endures such horrors as, um, a naked, busty Malaysian masseuse rubbing her body down with oil. She finally slips away for a short-lived reunion with Marc before he hops on another plane, only to be chased by Bruce's henchman onto a tour boat where she 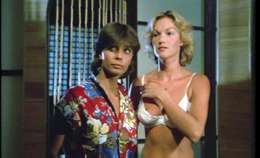 hooks up with a lesbian tour guide named Joan (Solar). Before long they're discovering the mysteries of each other's bodies on a train ride and romping naked all over Thailand before Joy comes up with a unique polyamorous solution to her romantic problems.

Completely different in atmosphere and execution from the first film, Joy & Joan apes Emmanuelle in its Thai setting but distinguishes itself with the always enjoyable presence of Lahaie and the strange storyline in which no one reacts quite the way you might expect. The segue from romantic drama to kinky pursuit thriller is unexpected enough, but the film then takes another wild detour in the final stretch unlike any other wrapup in contemporary erotica. Also noteworthy is the excellent, pop-laced score by French pop idol François Valéry, who far exceeds his work on the first film. Though the director and Solar never appeared in another film, this in many ways is a more memorable and sturdy piece of work than its predecessor; both are definitely worth checking out though as above-average examples of theatrical European erotica during its final glory days. Very few English-speaking viewers had a chance to run into this film as it didn't even get to go the Private Screenings route and barely aired on cable; only unsubtitled bootleg copies could satisfy any curious fans for decades. Fortunately Severin's disc features a solid anamoprhic transfer (pretty much on par wtih the first film in every respect) and optional English subtitles to finally make sense of the whirlwind plot. Definitely recommended if you thought you'd already seen every sexy trick the French had to offer.