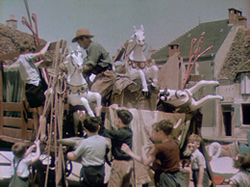 Widely available in Europe but completely out of circulation in America long after its sole legal release (on VHS from Embassy), Jacques Tati's first feature film (which segues into his masterful Mr. Hulot's Holiday) was such an odd victim of circumstance it's a bit of a miracle we still have it at all. Following World War II, Fren 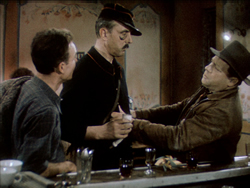 ch cinema was pulling itself back together and still shooting films in black and white. After gaining fame as a music hall performer, fighting in the war, and popping up as an occasional actor on film, Tati took on directing chores for "L'École des facteurs," a 1947 short about a postman who decides he can be just as proficient as his famous American counterparts. Many of the ideas were expanded to become his first directorial feature-length effort, Jour de fête, which he shot in the new Thomson color system with one camera and in black and white with another. Since there was no way to actually make color prints, the latter option was the only one viewers saw until the mid-'90s. However, Tati went back to the monochrome version in 1964, recutting it to 79 minutes (both adding and subtracting footage) while adding color tints to a few key items -- including a French flag.

The color version is now considered the preferred one, as some of Tati's gags specifically rely on color coding to fully make sense. However, don't expect anything like vibrant Hollywood Technicolor here; it's a much softer and more stylized process, often feeling much closer to the two-strip Technicolor found in early films like Mystery of the Wax Museum. The story here once again follows a postman determined he can do as well as the American mailmen he sees in newsreels, and spurred on by some wine, he decides to deliver the country village's mail in record time. Meanwhile a traveling fair comes to town, just one of the many distractions and complications with which he has to contend on his mission -- including a whole lot of other bicyclists.

Shot in the town of Sainte-Sévère-sur-Indre, the film proved to be enough of a hit at home to get Tati's directorial career off the ground despite its hiccups getting onto actual movie screens. It's a simple and charming film, obviously infl 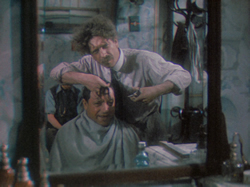 uenced by the cabaret gags Tati had perfected on the stage and was trying to translate onto film. Hints of his masterworks to come are in abundance here with the depiction of colorful locals and the complexity of day-to-day life regardless of location, though ultimately it's all a matter of simply looking for little pleasures (both in life and in the film). 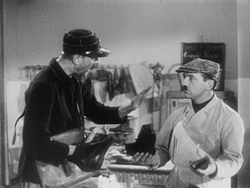 Both versions have been released on a single DVD from the BFI, with a dual-format edition in 2012 also adding a Blu-Ray option. The phrase "it is what it is" definitely applies here, as the primitive color process doesn't exactly produce the most vivid or razor-sharp cinematic image imaginable. Just bear in mind that this version almost vanished into oblivion, which would have been a nasty blow to movie history on several fronts. The leap to HD is obviously limited by the film elements, which of course are always going to look rough and soft no matter how much technology advances. In any case, it's a wonderful little film best appreciated with a little context to explain how it looks. The '64 edition is also present, and not surprisingly, it looks much more crisp and healthy since it was a more traditional B&W production with some tinting added after the fact. This isn't really the best way to see the film for the first time (especially due to the added narrative device of a painter visiting the village, added to make the film easier to dub and distribute abroad), but as an alternate edition made to cope with the technological and commercial demands of the time, it's quite fascinating and foreshadows the similar overhaul performed on Mon Oncle. The Blu-Ray is filled up with both cuts of the film, while the DVD adds on a few standard def extras: the original short film (which can also be found on Criterion's Mon Oncle release), the 1936 René Clément comedic boxing short "Soigne ton gauche" (which stars Tati and runs for 12 minutes), and "Cours du soir," a 1967 short (27 minutes) directed by Nicolas Ribowski and written by and starring Tati, with Mr. Hulot returning to teach an acting class -- with the expected hilarious results. As with the BFI release of Mon Oncle, the two-disc set comes with a booklet containing a Tati bio and liner notes by Philip Kemp, who covers the film's color difficulties and distribution history.