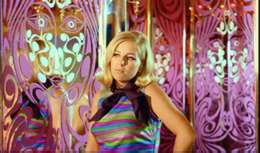 threadbare plot of Kiss Me Monster, involving a strange cult and murders connected to a piece of music, is basically an excuse to get the private eyes in a string of situations where they can shimmy, shake, and shoot at the drop of a hat. Technically there is a deformed maniac on the loose, which is enough to get those entered into many horror movie guides on the flimsiest of excuses.

A silly little piece that plays like a kinky remake of Roger Corman's A Bucket of Blood, Two Undercover Angels kicks off with our two fetching detectives trading badly dubbed wisecracks as they attend a gallery of violent sculptures at a local art gallery. Upon noticing a striking resemblance between a local missing girl and one of the painting's 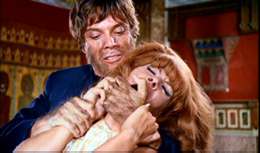 victims, the Red Lips gals decide to investigate. Their mostly nonsensical journey takes them from swinging nightclubs to the lair of depraved artist Adrian Hoven (Mark of the Devil) who kidnaps girls with the aid of his hairy, wolfmanesque assistant, Morpho (a name that seems to pop up in an awful lot of Franco films).

the two heroines to have a saxophone jazz duet or deglamorizing them with big glasses and clothespins on their noses, the films never take themselves too seriously and certainly never bore. The kicky music by Jerry Van Rooyen (a Franco regular) is a major asset, too.

Shot in a variety of languages and dubbed everywhere they were released, the Red Lips films feature touch-and-go English dubs that range from adequate to wince-worthy. These versions first appeared on DVD from Anchor Bay in watchable but unspectacular presentations; however, for sheer go-go visual eye candy, Blue Underground's welcome two-disc upgrade set is the only logical option. The widescreen transfers look terrific, with electric-hued color schemes that threaten to blaze right off your TV set. Theatrical trailers for both films are included along with Franco interviews. Two Undercover Angels features the more traditional of the two, "The Case of the Red Lips," in which Franco covers the genesis of the projects, his memories of the producers and international financing, and working again with Reynaud on two of his more featherweight efforts. Kiss Me Monster features the much wilder and more endearing "Jess's Tangents," which finds the director spouting off on a wide array of topics in the most entertaining and hilarious manner. Too bad he couldn't do an entire audio commentary like this!

In many respects, Succubus (released in Europe as Necronomicon) is the quintessential 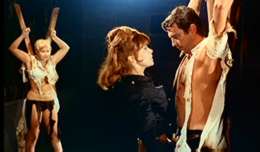 '60's Franco film. Sex, sadism, and a trippy disregard for logic are the order of the day as European exploitation favorite Janine Reynaud portrays Lorna, a nightclub performer whose S&M-inspired stage act inspires a series of hallucinatory encounters / flashbacks / fantasies that tantalize the viewer more than they offer explanations. Mannequins, murder, and strange castles figure in these scenarios before the line between reality and dark fantasy is completely demolished in the final few minutes. 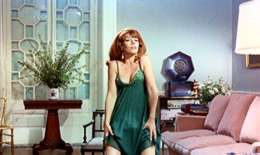 as Soledad Miranda's does in Vampyros Lesbos, and her sultry series of dances and costume changes (supplied by Karl Lagerfeld!) make this a real treat for the eye. The sultry jazz score is an asset as well, while Franco fans will derive pleasure from spotting a few of his future frequent players like Jack Taylor and Howard Vernon among the cast. Despite the much-touted X rating, the film is comparatively mild today (apart from the still-strong bondage stage bit) with a few minor topless bits by Reynaud and lots of sighing providing most of its erotic charge. A bit older than your average starlet, Reynaud is perfect as the first of many Franco Lornas with her tough-as-nails mouth and unearthly eyes; too bad she never found another role quite as intoxicating again. 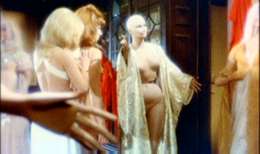 Succubus first appeared on DVD from Anchor Bay in a compromised full-frame edition which sheared the sides off many compositions and featured a flat, outmoded transfer plagued with early compression problems. Blue Underground's much-needed upgrade restores the original compositions and looks considerably better. Many sequences go berserk with soft focus, intentional grain and various filters, but even on a large widescreen set, the transfer looks quite pleasing and film-like. Considering the melange of various nationalities and the different languages spoken on the set, this English mono track is about as serviceable as any other. Along with the English theatrical trailer, the disc includes two very welcome interviews with Franco and Taylor. The director is his usual entertaining and perceptive self, discussing the cast in detail (including recollections about Reynaud and why she was happy on the set) along with his somewhat vague philosophical intentions for the film, while Taylor chats about the location shooting and his early relationship with Franco, which would continue to extend many years into the future.