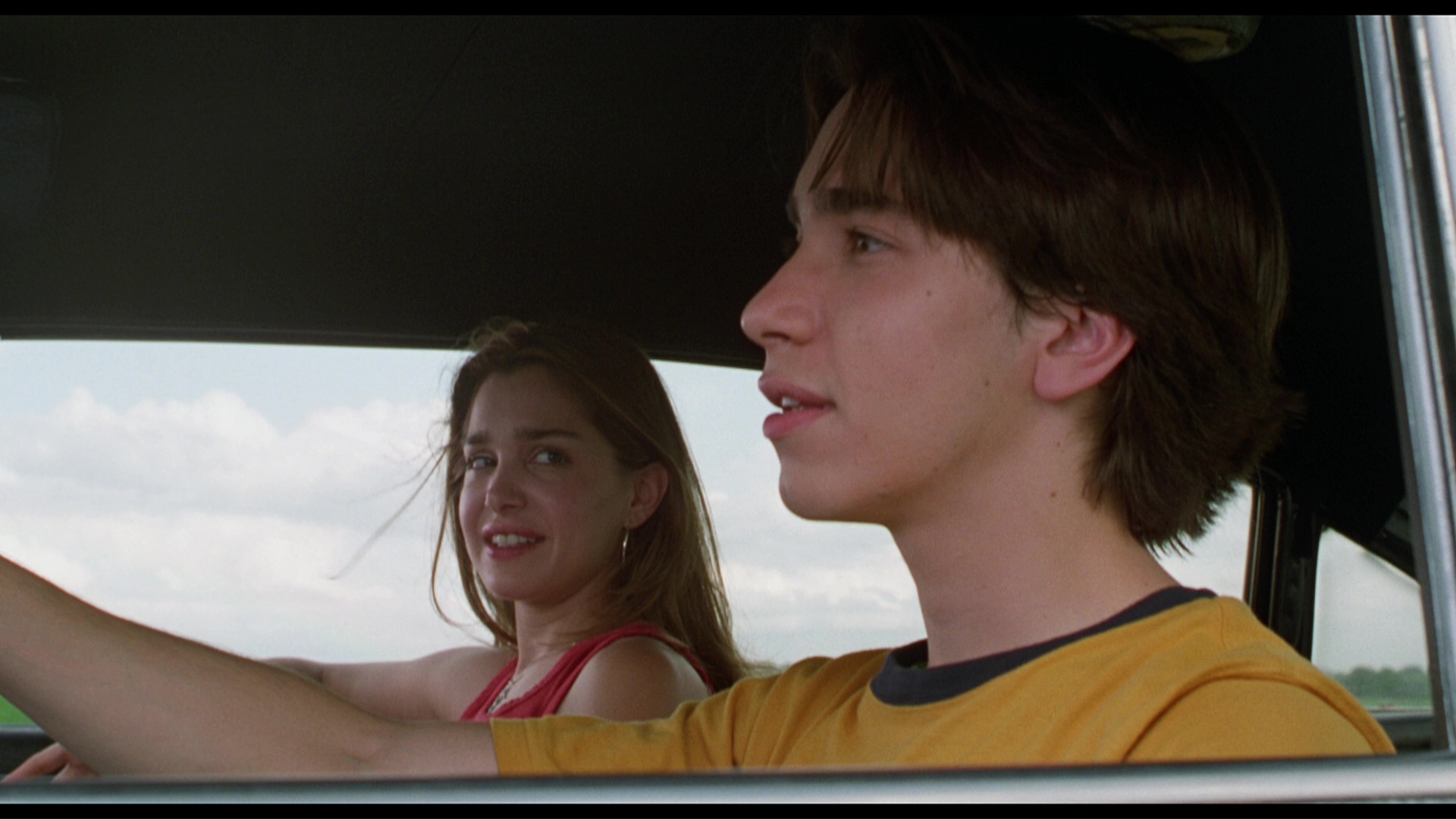 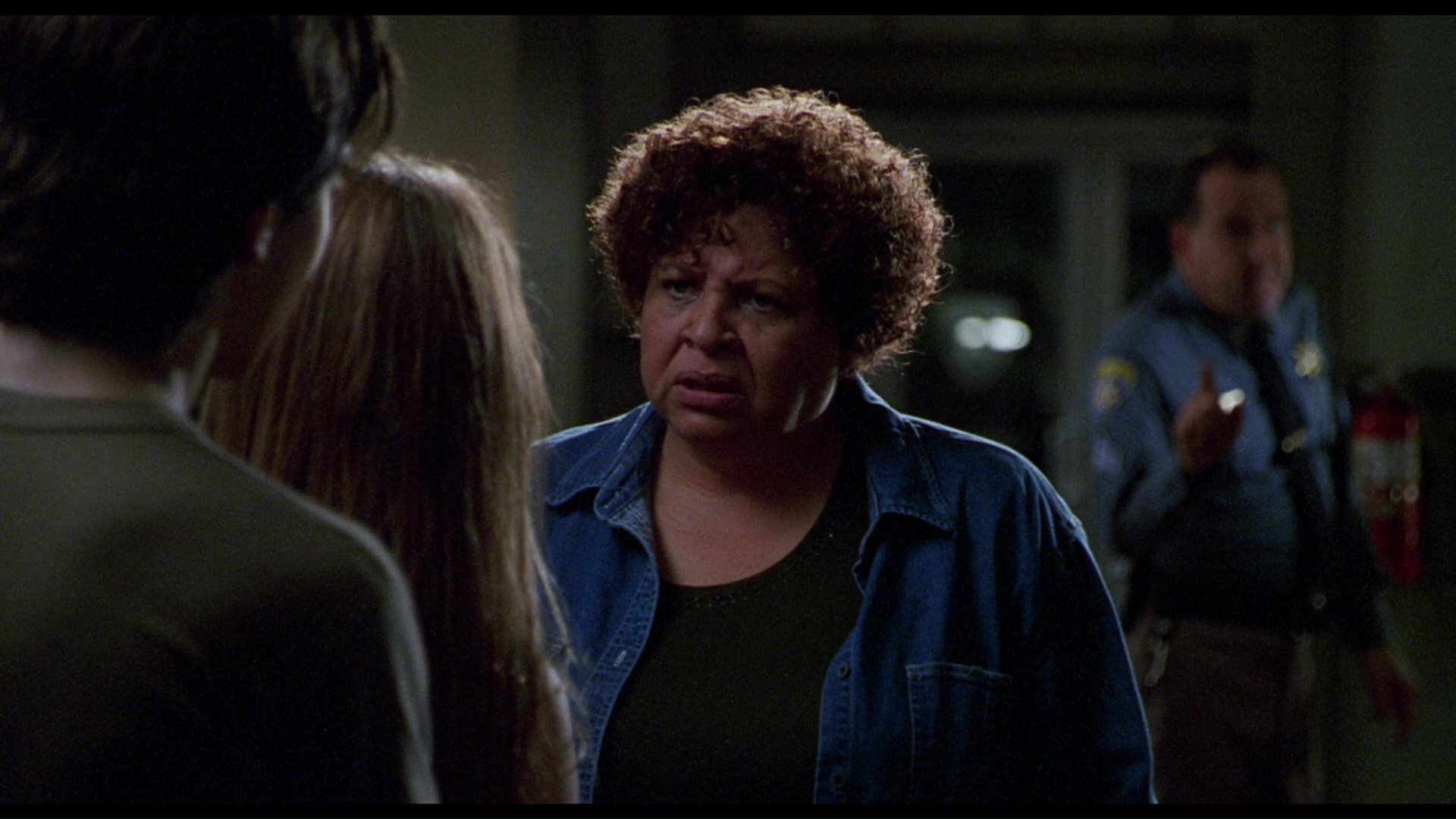 If ever a film benefited from good timing it was Jeepers Creepers, a modest but ruthlessly effective little indie that got snagged by United Artists and MGM who propelled to a shockingly successful, record-breaking Labor Day opening in 2001. This nightmarish stab at a new American urban legend introduced a grotesque new monster in the horror movie pantheon courtesy of the Creeper, a flesh-eating fiend who stalks the American backwoods every 23 years to collect body parts. The film went on to become a home video and TV staple, with a strong following today still leaving fans clamoring for a third film.

While heading home for spring break, siblings Trish (Phillips) and Darry (Long) are nearly run off the road by a very creepy, dilapidated old truck with a license plate reading “BEATINGU.” They spy it again soon after pulled over by the side of the road, with the silhouetted driver apparently dumping a body wrapped in bedsheets down a large pipe in the ground. The sinister driver catches on and tries to chase them down, after which they double back so Darry can try to save whoever was dumped underground. What they find is something far worse than they could have ever expected.

Carried by two strong lead performances and a catchy concept, Jeepers Creepers is an oddly constructed film with many feeling the opening half (a sort of American gothic twist on Duel by way of Joyride) is stronger than the second, a more traditional monster siege with a particularly downbeat ending. Fortunately the film never outstays its welcome at a brisk 90 minutes, and the script wisely doles out details about its monster in small doses with a new surprise or two popping up at regular intervals. There’s also a strange but memorable appearance by the late Eileen Brennan as a gun-toting cat lady, while character actress Patricia Belcher pops up in the last third to do a credible job as a psychic delivering some potentially ridiculous exposition. All of this was enough to make the film stand out during a particular drought in the horror genre, just before Saw and The Ring came along to change the rules all over again. 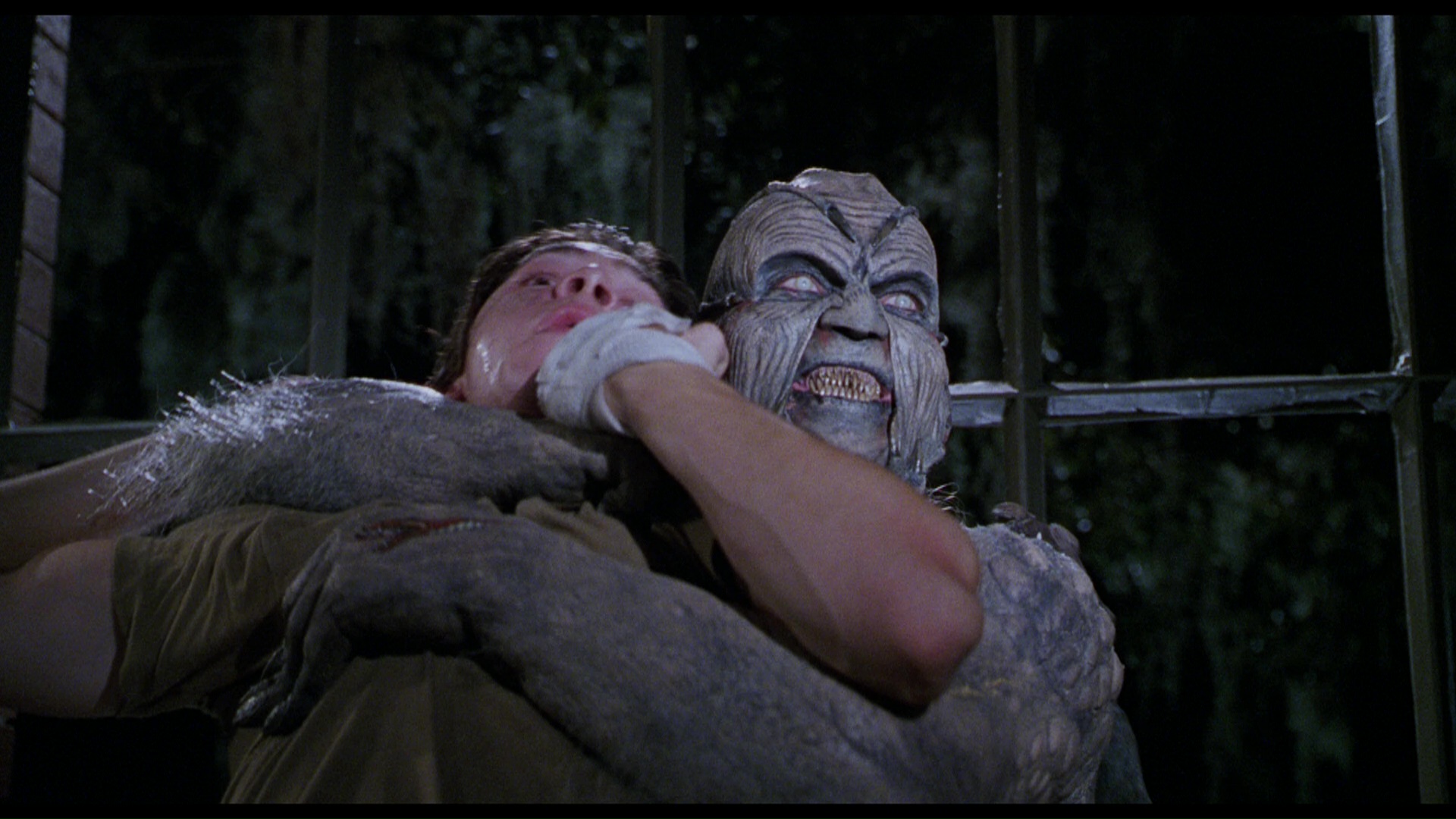 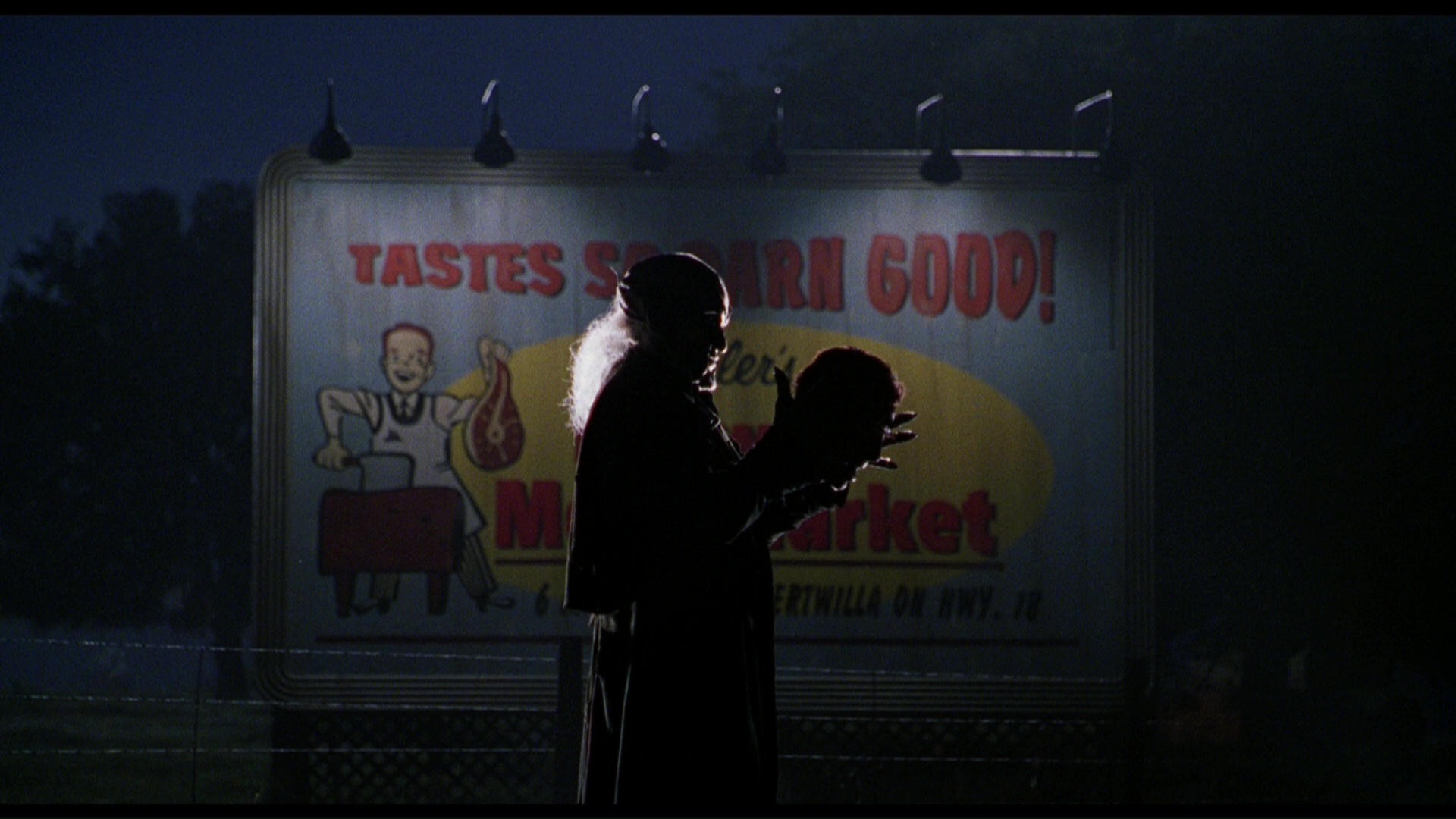 Of course, it’s virtually impossible to talk about this film without addressing the issue of director Victor Salva, a lifelong horror movie fan who made this film with the backing of Francis Ford Coppola. The outroar that erupted over his Disney film Powder hadn't entirely quieted down by this point (just Google his name to find out the details of his conviction and jail time); in fact, his ongoing directorial career has been a hot button topic ever since while raising some difficult questions about whether fulfilling a criminal sentence should allow someone to return to their craft and how long and how severe the consequences should be. This thorny issue that will continue to force viewers to decide for themselves how (or whether) to separate an effective work of cinema and everyone else who worked on it from the undeniably abhorrent behavior of one of its primary creators.

Jeepers Creepers has been treated quite well throughout its history on home video starting with its 2002 flipper DVD release, featuring a nice anamorphic transfer, a Dolby Digital 5.1 mix, and a robust slate of extras including a Salva commentary filled with details about how the film was shot in Florida on an increasingly shortened production schedule. An hour-long “Behind the Peepers” documentary (viewable in its entirety or divided into six segments) covers the two young leads, the film score, the casting of Jonathan Breck as the Creeper, the monster design, and the night shoots. Also included are ten deleted and extended scenes (17 mins.) including an alternate opening and ending, both interesting but inessential, as well as a photo gallery, a director’s cameo bit of bonus footage, and the original trailer. The same material was carried for a 2012 Blu-ray, which a really blah airbrushed cover but a substantially improved HD transfer that brings out the dark, burnished quality of the original cinematography nicely but tones down the colors quite a bit. The DTS-HD MA 5.1 track is a ton of fun, too, with lots of eerie ambient effects. The same disc was carried over for a two-disc Blu-ray release with the sequel, which was stripped of extras entirely in one of the format’s more bone headed decisions.

However, the final word on the subject has to be the double-disc Blu-ray set from Scream Factory issued in May of 2016 (too late for spring break!). The transfer itself is billed as a fresh 2K scan of the film’s interpositive element, which brings out as much 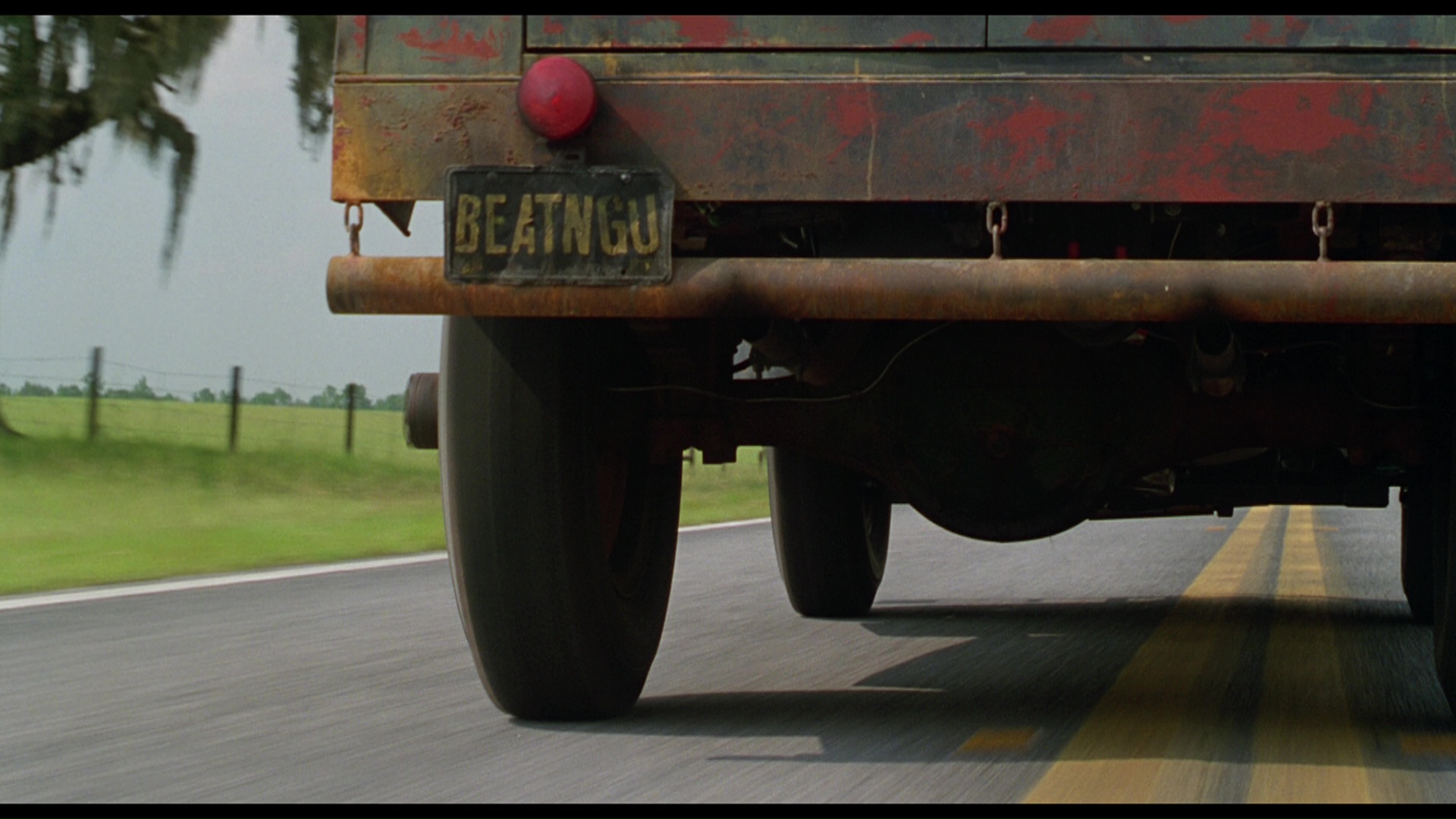 detail as possible given the 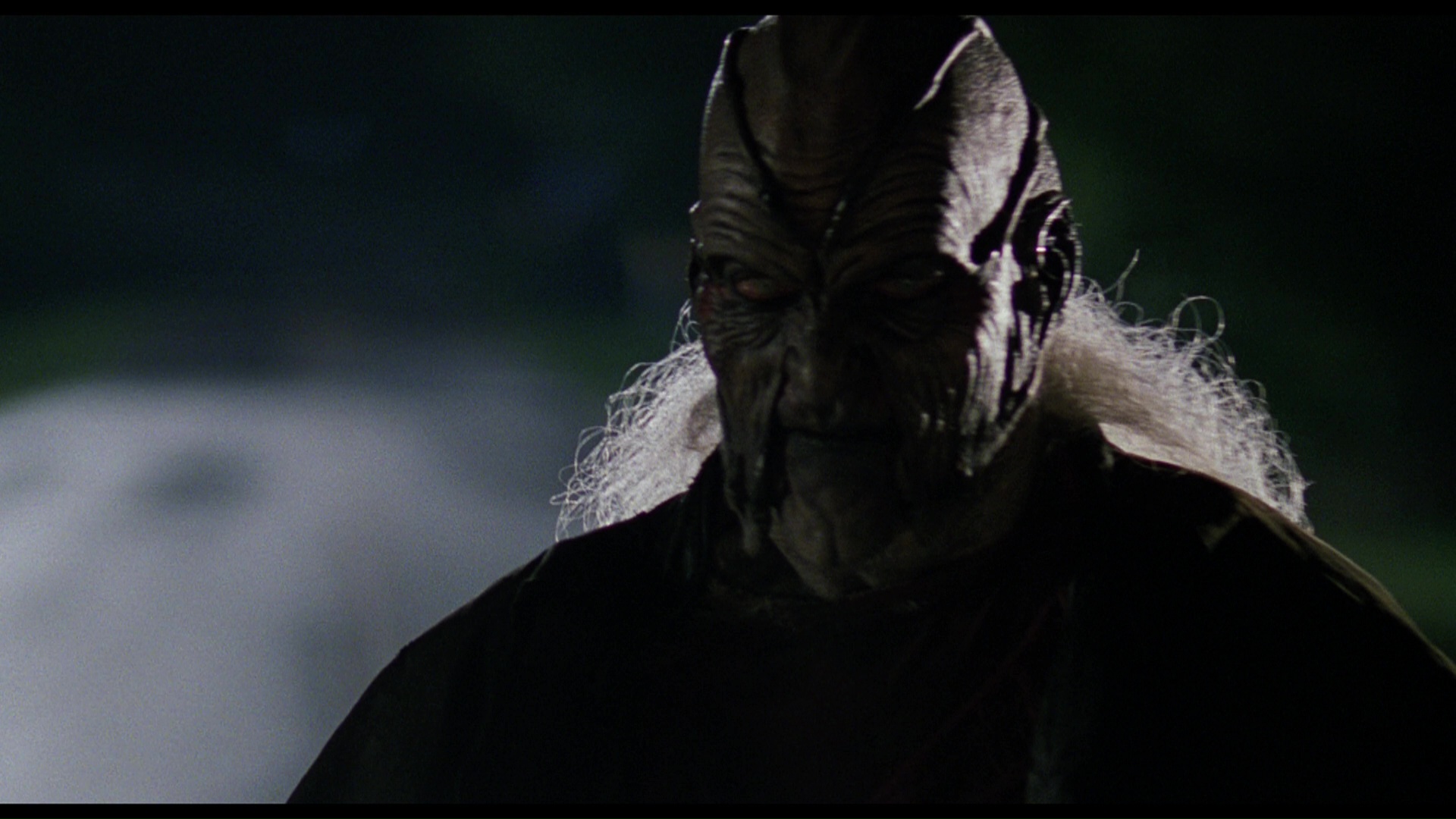 fact that the film was intentionally darkened for much of its running time. Detail bumps up, the already rich colors are slightly more clearly defined and more vibrant with less of a blue overcast (particularly Long's shirt, which is now back to its correct shade of yellow), and the police station attack is a little easier to make out (definitely more so than in the theater, where it looked like mud). This transfer also corrects a slight tilting to the right on the earlier HD one which can be seen by looking at this sample image from the older Blu-ray. The previous Salva commentary is carried over but you also get a far more entertaining new one in which he’s joined by both Long and Phillips (who’s slated to star in the third entry), whose friendly chemistry is apparently still intact enough to make you wish they could team up as siblings on screen again.

The second Blu-ray features the extras from the prior releases (sans the cameo, not big loss), while adding a radio spot and three very substantial new video featurettes. The 37-minute “Jeepers Creepers: Then and Now” brings together Salva, producer Barry Opper, director of photography Don FauntLeRoy, editor Ed Marx, and actor Tom Tarantini (who also popped up in the sequel), with a thorough retrospective look at the film and its influences (including The Birds and Duel), how Coppola became involved, what the studio originally wanted from the script, and now challenging it was to find a shooting area spread out and unpopulated enough to make the story convincing. Perhaps the most interesting passage is Salva's explanation of why the second half feels a little diminished and lopsided due to the major structural issues that had to be addressed during shooting, including juggling of various reveals about the Creeper's character and the omission of an elaborate train gag for the original climax. Opper sets a separate interview about his career in the 19-minute “From Critters to Creepers” (guess which franchise got him his start), including detours involving some oddball films like Roger Corman's Android (yep, you get some Klaus Kinski stories here) and City Limits, while Belcher has a fun new chat in the 16-minute “The Town Psychic” about how she was cast and fleshed out the emotions and motivations of her character in her mind. If you're a fan, this greatly improved edition definitely warrants helping yourself to seconds.