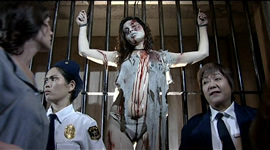 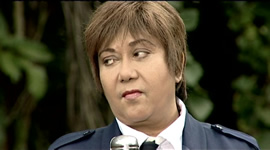 Every single women-in-prison cliche you could ever hope for is amped up through the roof in this, one of the final films by Italian sleaze guru Bruno Mattei (Hell of the Living Dead). Here we have the saga of Jennifer (Yzon), who's first seen on a boat with fellow female inmates headed to a tropical penitentiary. All of the women swap stories about the brutal crimes that landed them behind bars, to which Jennifer retorts, "I've done everything you've said - and worse!"

That spirit serves her well in this unholy torture camp called "The House of the Lost Souls," where disobedient prisoners are tossed into a punishment pen called the Devil's Hole. All of the women are assigned numbers and subjected to such indignities as public lashings, high-powered hosings, and insidious medical inspections, spending the rest of their daylight hours performing hard labor in the mud. The sadistic female warden, who only speaks in a loud snarl, is also in cahoots with the local officials to supply the best-looking ones as part of a new program where they work as unwilling strippers and prostitutes for everyone's amusement, including a nasty bit involving a snake in a basket that inspired the DVD cover art. Once the inmates start dying, Jennifer decides she's had enough and leads several of her fellow prisoners through an escape plan out into the jungle, where they're soon hunted down by the rifle-toting perverts.

Obviously the second half of this film owes a bit to The Most Dangerous Game and its cinematic successors, so the split structure allows Mattei to unleash a virtually nonstop parade of guilty pleasures. The film definitely wallows in filth but never feels all that vicious or bleak thanks to the gusto of the execution and the absurd, 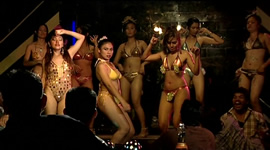 frequently hilarious dubbing, with very emphatic dialogue delivered at a dizzying clip. A familiar face from later Mattei films shot in the Philippines, Yzon acquits herself well here during the action scenes and makes for a compelling heroine, while the 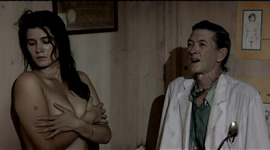 digital lensing actually doesn't harm things too much even though a scruffy 35mm texture would've been welcome. Incredibly, the music score (or as the credits dub it, "musical commentary" co-written by Mattei) manages to find ways to blatantly ape Aliens, Excalibur, Army of Darkness, and The Last of the Mohicans, among many others, which somehow just adds to the amusement value.

Intervision's DVD of The Jail: The Women's Hell is in keeping with other late period Mattei films, reflecting the SD widescreen video shooting about as well as possible. The dubbed English audio sounds fine for what it is, replete with dialogue you'll never believe. Extras include the "theatrical" trailer and a pair of featurettes. In "Acting for Bruno," Yzon and Anson appear for an 8-minute discussion of working with the maestro in his final years ("Every time he speaks, I thought he was mad!") including this and his two zombie films, while producer Giovanni Paolucci and screenwriter Antonio Tentori share their thoughts in the 22-minute "Prison Inferno," essentially a companion piece to their interview on the the Island of the Living Dead disc as they talk about the inspiration for doing a Jess Franco-style women's prison film and the challenge of doing the waterfall scene, which Yzon wanted to do herself. Needless to say, she didn't get her way.