Mass media entertainment in the 1950s was filled with anti-Communist propoganda and dire warnings of atomic terror, so it was only natural that filmmakers would eventually combine the two. A goofy hybrid that frequently reaches camp classic 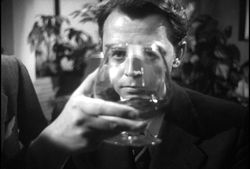 proportions, Invasion, U.S.A. (no relation to the Chuck Norris vehicle of the same title) posits a future in which an unprepared America is wiped out by evil Commies determined to foist their way of life on the rest of the world. It's not a very pretty picture.

Starting out like The Iceman Cometh on acid, our tale concerns a New York tavern where five Americans of different classes find their chatting and boozing interrupted by the peculiar and oddly accented "wizard" Mr. Ohman (Dan O'Herlihy, who went on to an apocalypse of a different kind in Halloween III: Season of the Witch). Ohman takes particular exception to his companions' laziness and griping about having to pay taxes, get drafted, and let the military use their businesses for its own purposes. Two of the patrons, chauvanistic reporter Vince (Gerald Mohr) and sultry Carla (Peggie Castle), are unnerved by the coincidence between Ohman's patriotic preaching and the simultaneous outbreak of war as Communist military forces rip their way across the country. The film then follows the nervous five as they watch alarming news reports and then scramble for their lives, wishing they had heeded the warnings of pinko danger lurki 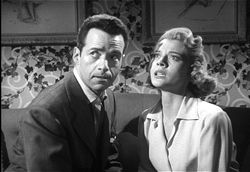 ng on every street corner.

Now equally famous in pop culture as one of the more memorable installments (for better or worse) of Mystery Science Theater 3000, this demented collision of absurd plotting, hambone acting, and copious stock footage still makes for entertaining viewing without much of the guilt tripping nastiness that mars some of its contemporaries. Silent film vet Alfred E. Green, who helmed over a hundred titles without a classic in the bunch, keeps the pace moving without stopping too much to ponder the silliness of it all, but that's about the best that can be said for him. The surprise ending - which, now that you know it, won't come as much of a surprise at all - was already old hat at the time, but it does add somehow to the unhinged nature of this patchwork piece of dementia. Perfectly suited for party viewing (without those heckling robots), preferably with alcohol handy to match the consumption onscreen. 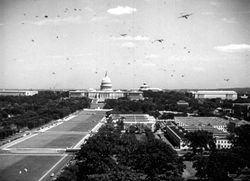 Synapse's generously appointed DVD contains a nice and sparkly full frame transfer of this 1.33:1 film, with slight windowboxing visible on some monitors. Newly recorded DV interviews with O'Herlihy, bomb scare favorite William Schallert, and Lois Lane herself, Noel Neill (who has a memorable supporting role in the feature), cover the territory well despite some technical problems with the source material. (TV's other Lois Lane, Phyllis Coates, also pops up as the wife of Erik Blythe's doomed Mr. Mulfory.) Two government audio recordings, "The Complacent Americans" and "If the Bomb Falls," offer some sobering chunks of propaganda, while the stills gallery is nicely complimented by an illustrated 100 film rundown of significant scare films compiled by Bill Geerhart (who also provided the informative liner notes). The other great Commie invasion film from the period, Red Nightmare (later reissued in re-edited form by Rhino as The Commies Are Coming! The Commies Are Coming!), features Dragnet's Jack Webb as the host for an outrageous invasion fantasia in which America turns Communist with disastrous results. Condensed here to a tight half hour, this is still one of the most amazing '50s film artifacts around.