While the idea of William Shatner acting in the unsuccessful, fabricated "international" language of Esperanto sounds like the makings of a camp classic, Incubus is really anything but. This pet project of Outer Limits producer Leslie Stevens was rarely seen during its release and appeared to 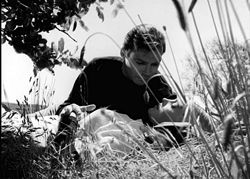 vanish entirely, existing more as a whispered about curio than a genuine film. The result, a sort of mythological mishmash of Horror Hotel and The Seventh Seal, is a strange and compelling experience that demands both imagination and patience from its viewers.

The pared down storyline, set in a vaguely identified pastoral netherworld known as Nomen Tuum, follows the spiritual battle for the soul of Marc (William Shatner), a former soldier who has settled into a quiet domestic life with his innocent sister, Arndis (Ann Atman). An alluring blonde succubus named Kia (Allyson Ames) appears to seduce the inherently virtuous Marc, but when she falls in love 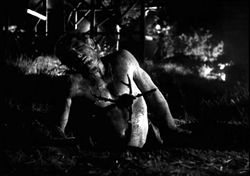 with him, a diabolical incubus (the ill-fated Milos Milos) arrives to even the score.

Though less than satisfying as a horror film per se, Incubus works as an attempt to create an art film out of purely California bred film talent. The Big Sur locations are magically transformed into a dreamy, disorienting alternate universe, while the supernatural is firmly grounded in poetic visuals based in nature. Shatner is restrained and sympathetic for once, with his usual scenery chewing inclinations held firmly in check here. Outer Limits fans in particular will enjoy contributions from the usual behind the scenes crew, including a score from Dominic Frontiere. From the 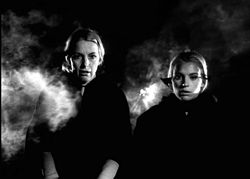 woodcut opening credits to the bizarre, demonic final scene, Incubus easily stands alone from any of its contemporaries and certainly deserved to be rescued from oblivion.

Considering we're lucky to be able to view this film at all, the video presentation is more than satisfying. The only existing source material, a print with permanent French subtitles, was unearthed by the French Cinematheque after the original negative was either lost or destroyed, depending on who tells the story. Image quality looks fine -- nearly pristine in most cases, actually -- and is marred only by the English subtitles superimposed over large black bars to conceal the French subtitles. The unaltered version with simply the small French subs is worth checking out for a second viewing, when one can focus more on the visuals without worrying about the dialogue. Extras include a camcorder interview by David Schow with cinematographer Conrad Hall (American Beauty), Bill Fraker, and producer Taylor; the men also provide a running commentary track in which they discuss the threadbare production, with Shatner providing his own separate commentary to discuss everything from the rigors of acting in an unfamiliar language to the challenges of evoking the supernatural onscreen. Less valuable are "Curse of the Incubus," an Exorcist-style catalog of tragic events which befell the cast and crew, and a "trailer" which is actually a new, surprisingly condescending commercial hawking the VHS release.

Though technically not a horror film, Roger Corman's The Intruder is as unsettling a film as you're likely to see from America during the early '60s. The topic of desegregation was still a very hot topic in 1961, and aided

by a blistering performance from William Shatner and a pitch perfect script by noted Twilight Zone scribe Charles Beaumont, Corman delivered a wrenching portrayal of racial hatred and social manipulation that was understandably too hot for many viewers to touch at the time.

In a small Missouri town, charistmatic Adam Cramer (Shatner) arrives by bus and gradually insinuates himself into the local populace, spewing messages of hatred and gradually turning opinion against the recent legally enforced segregation. Cramer also sparks up an affair with a married woman (Jeanne Cooper) and finds a flawed nemsis in the form of Tom McDaniel (Frank Maxwell), a newspaper reporter whose family can't quite grasp his tentative acceptance of blacks and whites coexisting on equal terms. Tensions escalate, leading to the arrival of the KKK and the formation of a lynch mob

An uncomfortable viewing experience in the best possible way, The Intruder has never really received its due, probably because the major white protagonist is both terrifyingly real and villainous instead of a comfortable identification figure for the audience. Corman constantly undercuts viewer expectations, delivering a portrait of the South unlike anything seen from a major studio; in fact, the stark realism of the location shooting resulted in more than its share of problems,

as this DVD reveals in its limited but revealing extras. Shatner's barnstorming theatrical approach is used to excellent effect here as he makes an all too believable demon in human form, one who uses words rather than physical violence to achieve his ends. Be warned that the film contains unflinching language to depict the period and rarely pulls any punches, so approach with caution if you're PC-inclined.

Rarely shown apart from occassional late night TV broadcasts, dupey VHS copies, and shredded 16mm prints, The Intruder looks comparatively spectacular on DVD, despite some unavoidable blemishes brought on by its advancing age. Contrast is sturdy and looks dead on, while the sound is far more clean and legible than ever before. Not a demo disc by a long shot, this is nevertheless a welcome opportunity to reassess a film too often overlooked. Press materials before its release indicated a commentary track with Corman and Shatner, though what actually materializes is a videotaped discussion with both men in which they discuss the challenging, uncomfortable, and borderline dangerous circumstances surrounding the filming. A worn looking trailer is also included, indicating there's only so much one can do with a great little film that, by and large, speaks just fine for itself.