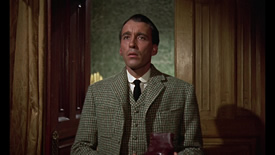 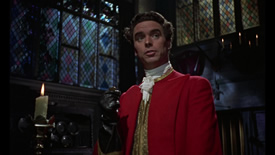 This second feature film version of the most famous Sherlock Holmes mystery came as something of a shock after the iconic Basil Rathbone and Nigel Bruce adventures beloved both before and after World War II. Here the sleuth was revived courtesy of Hammer Film Productions at the start of its run of horror masterpieces, helmed by the brilliant Terence Fisher just after the one-two punch of Horror of Dracula and The Revenge of Frankenstein (and shot the same year he made The Mummy, The Stranglers of Bombay, and The Man Who Could Cheat Death). That's an incredible streak by any standard, and his take on the famous puzzle about murder and mayhem on the moors fits solidly with the colorful, brash aesthetic he was developing with his more overt monster yarns at the time. In fact, this film significantly lays out the groundwork for the visual and narrative experiments he would try with two more masterpieces right after it, Brides of Dracula and particularly The Curse of the Werewolf, which explicitly picks up on motifs and story structure found here.

Steeped in gothic atmosphere, sexual torment and barely concealed brutality simmering beneath the glossy, oaken veneer of English nobility, this outstanding transposition of Arthur Conan Doyle's novel to the bloody red Hammer universe is fine as an adaptation but undeniably successful as a blend of murder mystery and horror. Peter Cushing takes the lead as Holmes, performing so convincingly that he continued to reprise the role on and off well into the mid-1980s. Other Hammer regulars abound, with the able André Morell (Plague of the Zombies) making a convincing 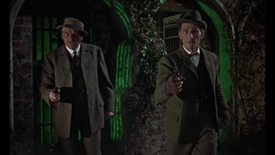 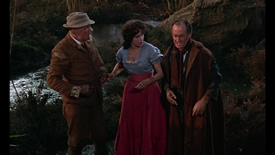 assuming a rare, dignified heroic role as Sir Henry, the Baskerville heir who might be the next in line after his predecessor is found dead of heart failure on the moors. (Lee would also play Holmes in the above-average German outing, Sherlock Holmes and the Deadly Necklace, and appeared as Mycroft Holmes in Billy Wilder's The Private Life of Sherlock Holmes.) The narrative itself is very common knowledge by now, but for the record it involves Holmes and Watson summoned to Baskerville Hall where a family legend about an avenging, bloodthirsty hound seems to be connected to the misdeeds around the property. Holmes sends Watson ahead to perform the physical investigation, and many twists and turns ensue.

Accompanied by James Bernard's rip-roaring music score, Fisher's version opens with an extended, memorable prologue in which the curse's origin is dramatically staged as a "sins of the fathers" malediction from the outset. Complete with a rare early utterance of the word "bitch" (censored from some prints) and a pair of gruesome fatalities, this curtain raiser promises an unusual ride for Holmes fanatics and more than delivers by the memorable quicksand finale. The plot experiences more than a few alterations along the way, including an enlarged and sexed-up role for Mrs. Stapleton (played here by buxom Marla Landi), but it's a fine introduction to the story for newcomers and a very memorable interpretation for more experienced Holmes fans.

MGM's DVD released in 2002 carried over their already solid 1.66:1 transfer from laserdisc, with the once-censored profanity intact. As usual for the time, it fell victim to 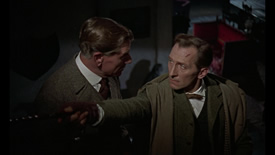 the studio's baffling insistence of presenting films in that aspect ratio in non-anamorphic transfers, a fate that also befell releases of titles like Some Like It Hot and The Train. Extras included the theatrical trailer (which apparently now only exists in black and white) and an entertaining "Actor's Notebook: Christopher Lee" featurette with the thespian talking about friendship with Cushing and his affinity for Conan Doyle. That master was the norm for well over a decade around the world, which was fine for 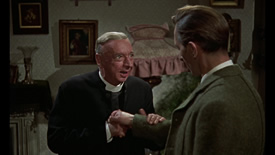 a while but left plenty of room for improvement. Eventually in 2013 an HD master popped up on MGM HD, with an Australian Blu-ray popping up almost a year later.

In 2015, Arrow provided the best option of them all with a stacked special edition centered around the same excellent HD transfer. Hammer fanatics have experienced a real rollercoaster with the company's titles on the format in recent years with output ranging from excellent to flawed (misframed or featuring doctored color timing or special effects) to atrocious (with Curse of Frankenstein shamefully sitting at the bottom of the barrel). Fortunately you can chalk this one up as a winner all the way; the framing is perfect, the colors have the gorgeous Hammer intensity where it counts (those splashes of red, the impressionistic green lighting, the burnished oak of the interiors), and the cinematic texture appears to have been left intact with some fine grain and natural levels of detail throughout. The LPCM mono audio sounds excellent, while James Bernard's score can also be enjoyed in an isolated music and effects track. There's also a third audio option, a new audio commentary by Marcus Hearn and Jonathan Rigby who strut their stuff with a knowledgeable breakdown of the film both in the Hammer canon and as part of the larger British cinema scene at the time, including tons of notes about even peripheral actors and crew members. 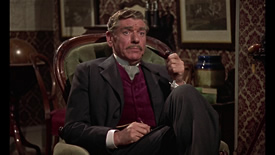 The trailer and 13-minute Christopher Lee featurette from the DVD are ported over here, but there's a nice helping of new material, too. The new half-hour "Release the Hound!" featurette in HD covers some of the same ground in a more compact fashion (well, sort of -- that opening clip is really long) with participants including hound mask creator Margaret Robinson, film historian Kim Newman, Sherlock co-creator and 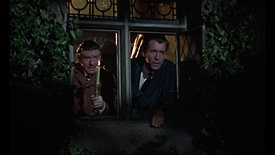 League of Gentlemen member Mark Gatiss, third assistant director Hugh Harlow, and prop chargehand Peter Allchorne. It's fun stuff (with some great canine stories), though be warned the volume bounces up and down tremendously from one clip to the next. The "André Morell: Best of British" offers an interesting 19-minute look back at the actor's career and particularly his Hammer work (and how he wound up playing authority figures) courtesy of his son Jason and authors Denis Meikle and David Mille. Timed to tie in with the international roll out of Young Sherlock Holmes, the 1986 "The Many Faces of Sherlock Holmes" features Lee hosting a 46-minute overview of the various permutations of the sleuth on the big and small screens over the years (from Rathbone to Murder by Decree) including some interesting detours through Conan Doyle's life including his increasing fascination with spiritualism. Two chapters from the novel read by Lee are also included (nearly 30 mins. total) along with a lengthy gallery of posters and stills, the usual eye-catching reversible sleeve art (with the familiar UK poster image on the back), and an illustrated booklet with very thorough liner notes by former Hammer archivist Robert J.E. Simpson, who offers some fascinating speculation about the reasons a second Hammer Holmes was never made and details the three extremely minor cuts required by the censors at the time to get an A certificate, which still seems generous for what remains one of the chilling, full-blooded Holmes films ever brought to the screen.