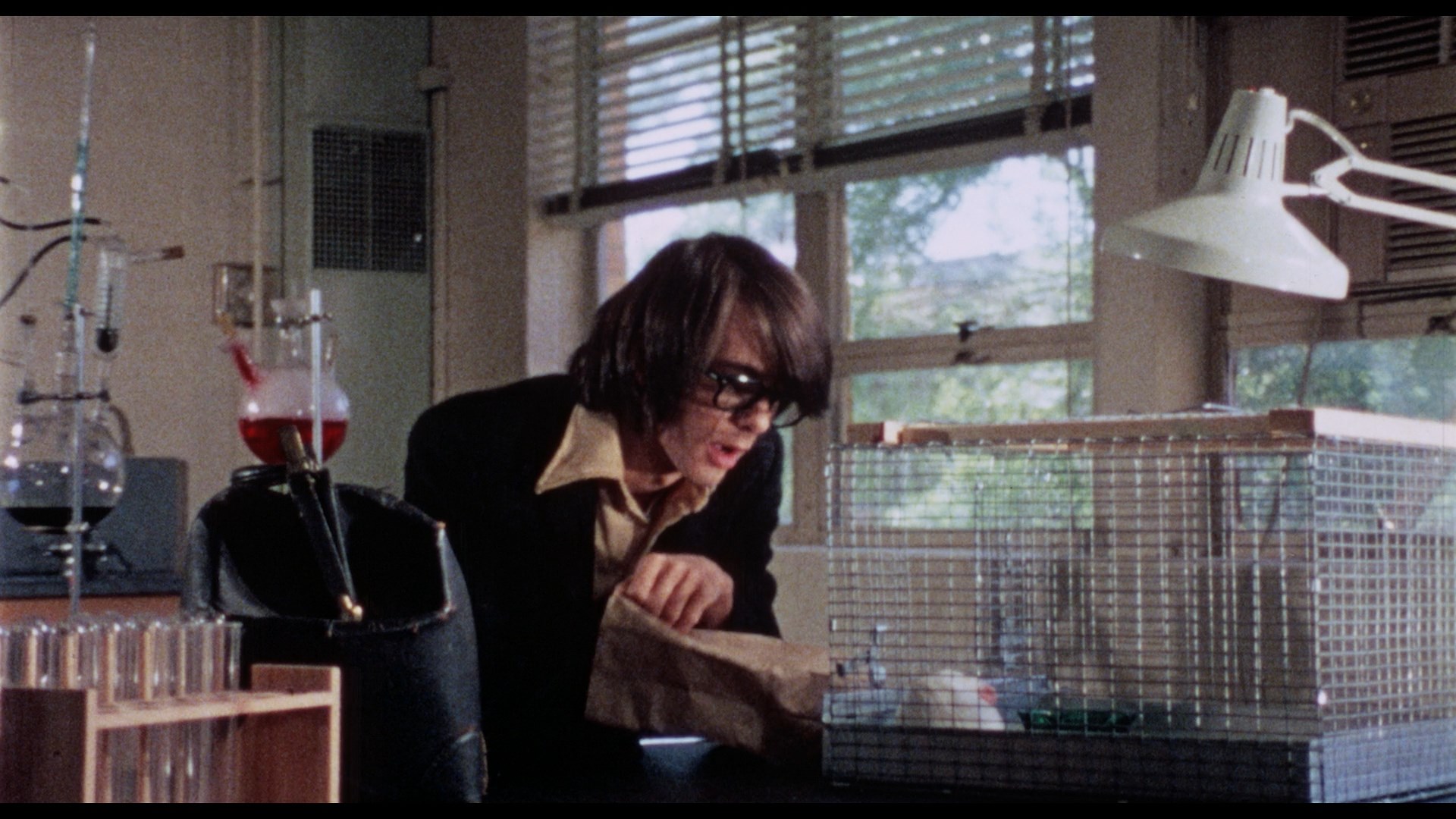 Geeky chemistry student Vernon Potts (Cardi) has a lot of problems. His fellow high school students are all bullying jocks; his English teacher (Hash) gives him an F and hacks up his massive science report when he hands in the wrong paper; the coach (Dallas Cowboys pro Niland) is blackmailing him into letting a meathead named Roger (McHenry) cheat off of his test papers; and worst of all, the creepy janitor (Felix) threatens bodily harm when Vernon's lab guinea pig, Mr. Mumps, gets the handyman's pesky cat in trouble. Only pretty Robin (Holotik), Roger's girlfriend, shows any sympathy at all, but Vernon's mostly on his own with his mother dead and his father often away on business. One night Vernon comes in to do some after hours work to find that his new formula, designed to effect physical changes rather than emotional ones, has turned Mr. Mumps from a cute white rodent into a snarling, snapping, coal-black beast with a taste for feline blood. The janitor shows up just in time to overreact violently, forcing Vernon to chug down Mr. Mumps' secret formula and turn the nerd into a wild, murderous beast who plunges the bully's head into a vat of sulphuric acid. The investigating police, led by Lieutenant Bozeman (Assault on Precinct 13's Stoker, complete with a super-funky music theme), find their work cut out for them when two more brutal murders swiftly follow, and Vernon finds himself unable to control his unpredictable transformations into a savage predator. 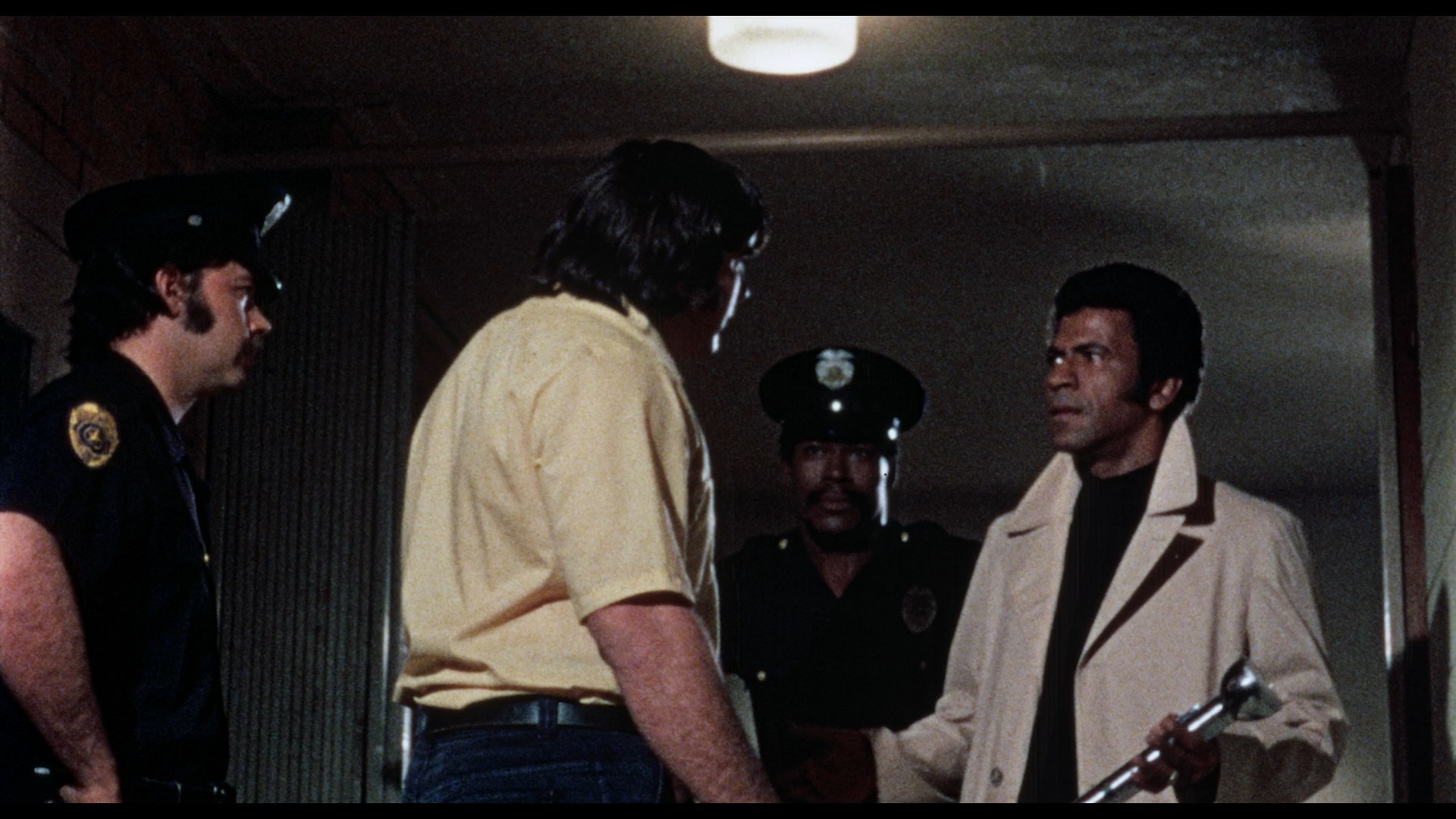 A popular TV staple during the late '70s and early '80s (often under the title Twisted Brain), Horror High was shot very cheaply on 16mm in Texas (complete with inexplicable supporting appearances by more Dallas Cowboys players!) and picked up by Crown International, who milked it for every penny on a string of double bills. It's not hard to see the film's appeal as it exploits the same basic high school revenge fantasy perfected one year later in Carrie, and the basic plot here would go on to be reused more or less in the next decade with Fear No Evil and Evilspeak. The film itself is shot with all the prowess of an Andy Milligan title, but the actors (especially TV regular Cardi in his last role to date) are all better than the cardboard material requires. Yes, it's all still formulaic trash, but the energetic execution makes all the difference here, as does the wonderfully ridiculous music score and theme song, including contributions from none other than Euel "Benji" Box. 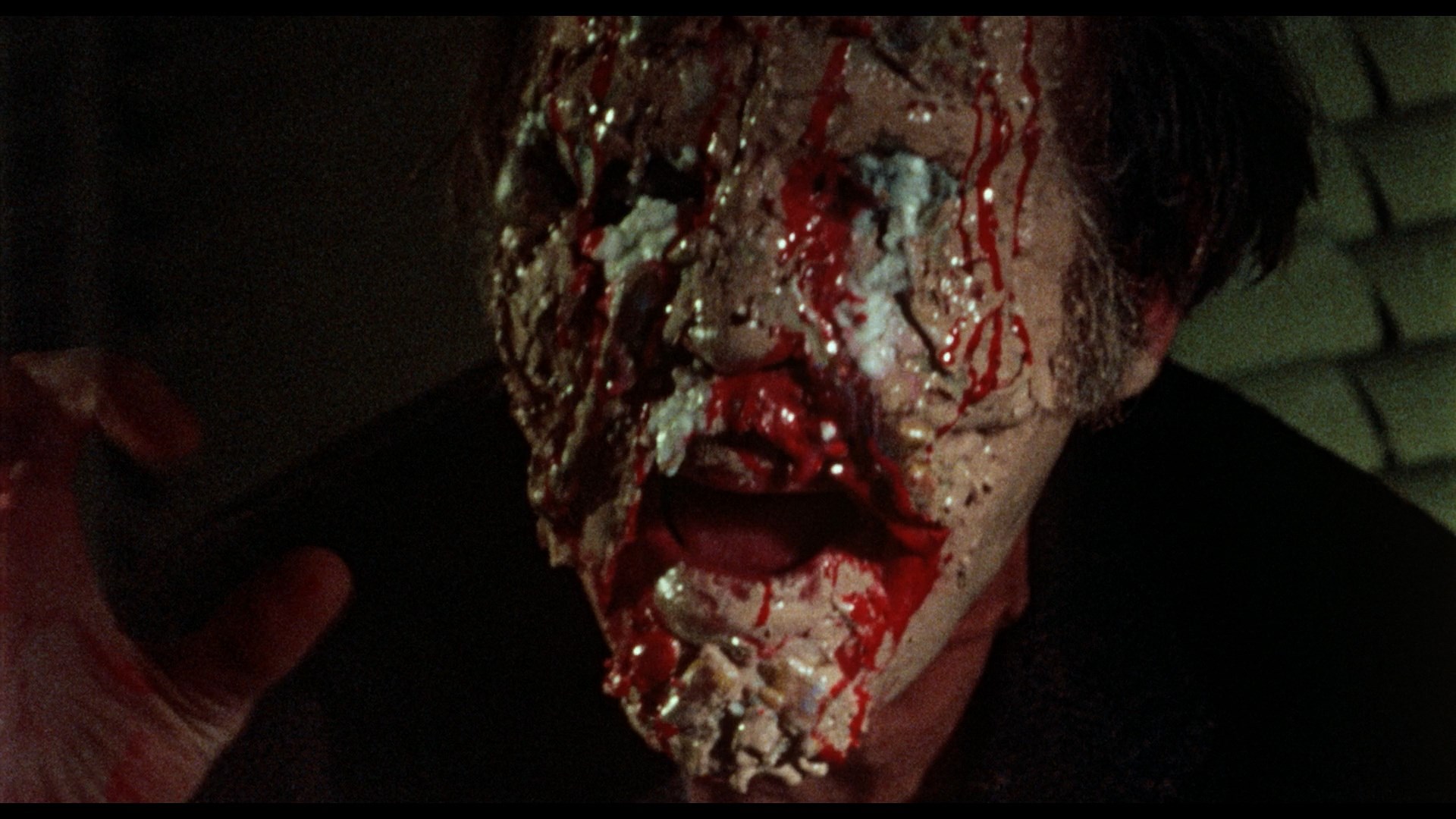 For some bizarre reason, the only video master for Horror High kept in circulation for many years by Crown was the drastically altered TV version. Many fans were upset by the softening of two murder scenes (namely a quick shot of fingers being snipped off and some gory shots of cleats stomping on a bloody abdomen), but even worse, the film was padded by over five minutes with newly-shot scenes of Vernon's absentee dad romping around with his girlfriend and talking on the phone. These excruciating additions completely killed the pace of the film and made it feel half an hour longer, pretty much killing any sense of momentum at the halfway point. This practice was fairly common at the time, with Curtis Harrington's Ruby representing the most extreme example of TV tampering. When Rhino licensed the Crown library for DVD, they were again forced to use this same TV version (under the Twisted Brain title) for their Horrible Horrors multi-disc set, which certainly didn't do anything to improve the film's reputation.

When this version went out of circulation, rumors abounded for years about a definitive Horror High release from several companies including BCI; however, the real McCoy eventually surfaced from Code Red with their cherry-picked set of releases from Crown's heyday. As advertised, this is indeed the original theatrical version with all the bloody mayhem intact (and an R rating on the sleeve). The anamorphic transfer definitely reflects the appearance of a cheap 16mm film blown up to 35 and reflects all the many shades of beige available on the color palette. It's still an ugly, grainy film, but the new transfer is at least sharper and better realized than the dupey, open matte TV print, which was also slightly crooked to boot. Occasional colors like pink and purple pop through nicely, but overall, it's a dark, grungy film from start to finish. Don't expect this one to make the jump to Blu-Ray anytime soon. The experience definitely has what's now termed a "grindhouse print" texture, which suits this particular film just fine. The added TV scenes are included as a bonus most people will only watch once, along with the alternate main titles, the theatrical trailer (which includes numerous interesting alternate takes), and a 24-minute interview with the amiable Stoker, who talks about working on Abby, Zebra Killer, Assault on Precinct 13, and this particular film, which he assumed had been completely forgotten. The film also features a "Failed Students" audio commentary by Beat the Geeks' J. Keith Van Straaten, Marc Edward Heuck, and Paul Goebele, who essentially give it the Rifftrax treatment from start to finish. At least it's better recorded than Code Red's past MST3000-style comedy tracks, and the opening Robert Louis Stevenson observations are actually pretty amusing. Yes, folks, this is indeed the Horror High you've been waiting for.