Well, you've gotta give 'em points for truth in advertising with this one. The title sums it all up quite nicely, as hookers played by scream queens terrorize the seedy backstreets of Hollywood by carving up their clients with chainsaws.

As with other films by drive-in favorite Fred Olen Ray, Hollywood Chainsaw Hookers is deliberate kitsch all the way, too ridiculous to take seriously but gory and sexy enough to please exploitation buffs.

Our story begins with L.A. private dick Jack Chandler (Jay Richardson) allowing blonde runaway Samantha (Linnea Quigley) to crash out on his couch. He slowly thinks back on the events leading to his meeting with this waif, who has become entangled with a bizarre religious cult whose female members pick up unsuspecting johns for an evening of unabashed sex and dismemberment. The queen killer, Samantha (Michelle McLellan, a.k.a. Bauer), steals the film with her giddy sawfest in which a client's rubber body parts go flying and spatter blood across her Elvis Presley black velvet painting, carefully shielded in plastic. As the body count climbs, Jack and Samantha are drawn to the mysterious Temple, where the leader (The Texas Chainsaw Massacre's Leatherface himself, Gunnar Hansen) oversees a surreal ritual involving chainsaw dancing and 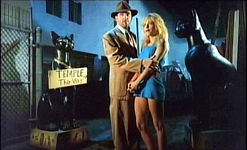 sacrifices. You can probably guess where this is all heading, of course: a catfight/chainsaw duel between scream queens Bauer and Quigley, a sequence which has earned its place in sleaze movie history books.

Like Ray's other films of the period like Sorority Babes in the Slimeball Bowl-a-Rama, this one tries so hard to please that it gets by on sheer energy alone. The filmmaking on display is your basic nail down the camera approach, but it's fun to see trashy L.A. locales adorned with horror goddesses in their prime. Add to that a campy soundtrack of pop tunes and more neon than an Alan Rudolph film, and you've got a unique time capsule of low budget indie horror before the whole industry wound up going straight to video.

Released under the banner of "Fred Olen Ray's Nite Owl Theater," this fun interactive package kicks off with an intro shot in Ray's 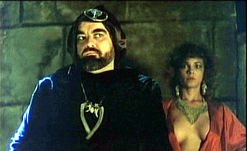 "mansion," in which he and several lovelies introduce the film while a couple of naked starlets play Twister on the floor. (Really.) The film itself looks about the same as the out of print Roan laserdisc, with a matted presentation cropping off the excess TV safe area from the full frame VHS edition. The compositions look a little better with the more "aesthetic" framing, but this isn't exactly a work of visual art in the first place. The visual texture is pretty gritty but colorful, in keeping with its ultra low budget roots, and audio is intelligible and free of distortion. Ray then returns after the film for a wrap up, followed by a giveaway for an Evil Toons animation cel. Other extras include trailers for this film, Angel Eyes, and Fatal Justice, and a "Making of" featurette consisting of shot on video interviews with Ray, Quigley, and Bauer. Ray gets in most of the best moments, including a funny closing demonstration of the film's British promotional campaign, which legally had to remove the word "Chainsaw" from the title.