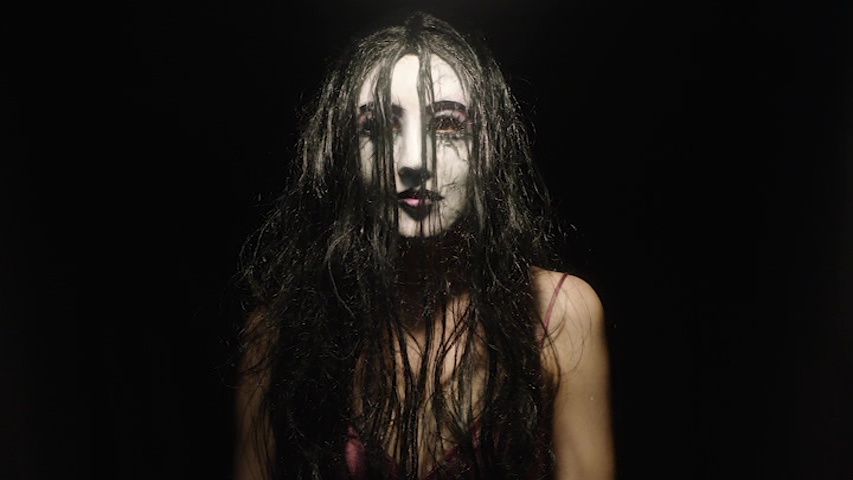 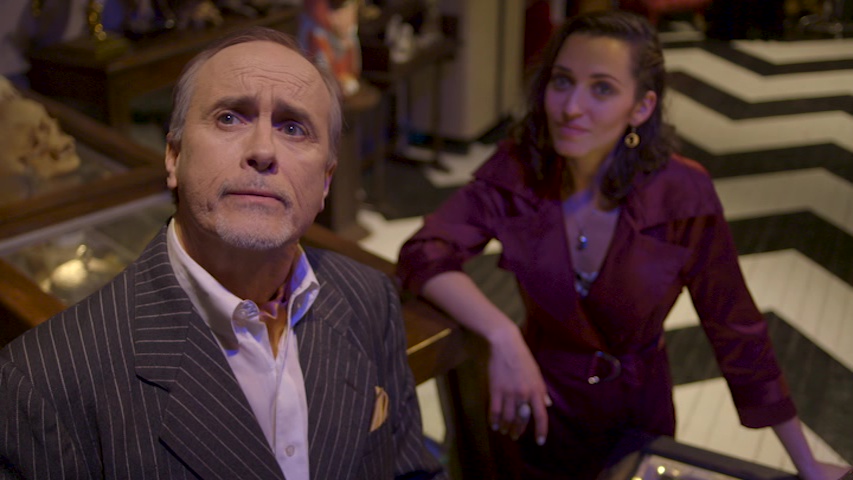 have been getting a fair amount of traction with the likes of A Christmas Horror Story and All the Creatures Were Stirring, but the concept gets tweaked considerably with Holiday Hell, an Amicus-inspired omnibus that expands the idea to encompass the entire winter season. It also marks the most recent film for Jeff Ferrell (Ghostlight), who handles 25% of the directorial chores here and reunites with many participants in his prior film, Dead West. This time he and co-conspirators Jeremy Berg, David Burns and co-writer Jeff Vigil get a major boost with the presence of the genre favorite Jeffrey Combs, who lends dramatic gravitas to the framing device and makes for the ideal casting choice when you find out exactly what's going on.

Out shopping for a last-minute gift for her sister with bizarre and challenging tastes, Amelia (Karimi-Naser) ends up in a curiosity shop called the Nevertold Casket Co. run by none other than Combs, doing his best Peter Cushing impression. He manages to turn her gift hunt into a journey into the macabre by sharing the stories behind a quartet of troubling items starting off with a mask that leads into "Dollface," the tale of a deaf girl who joins some really repugnant college pals for a night at a crime scene house that puts them in the path of a masked killer. Though fairly standard slasher material for the most part, this one has a mildly clever little twist at the end that puts it over. Things escalate considerably with the rollicking "The Hand That 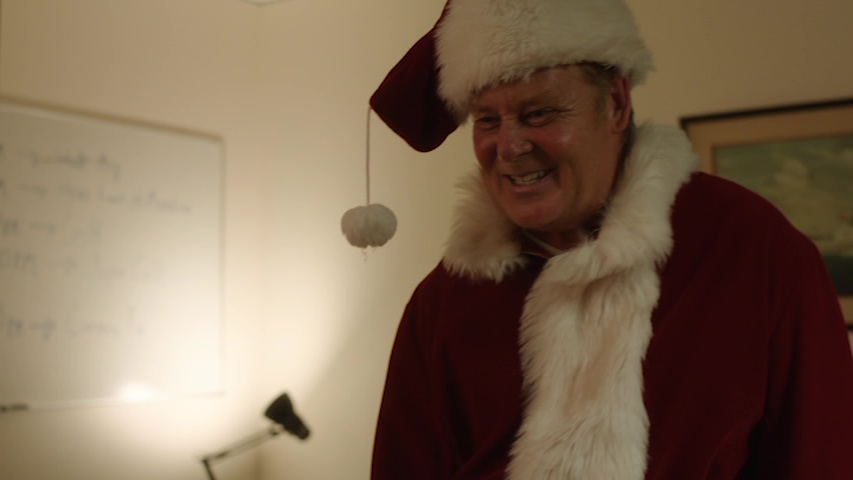 Rocks the Dreidel," a Hannukah-themed 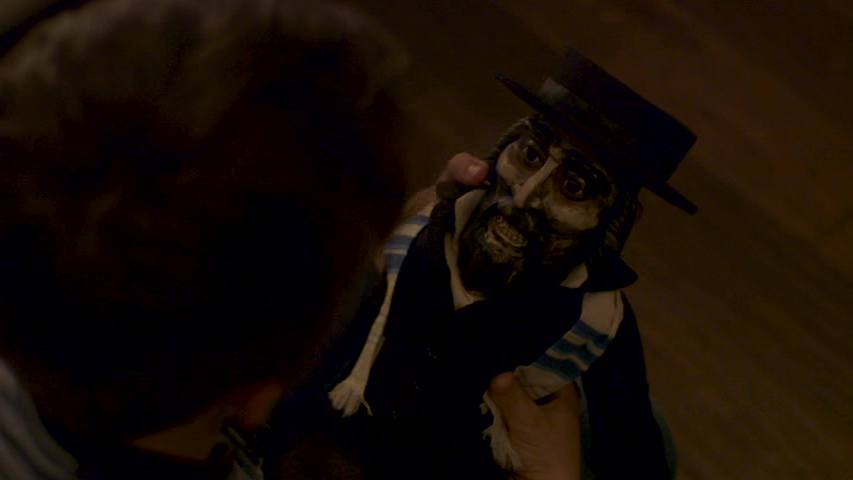 supernatural yarn about a doll that ends up in the possession of young Kevin (Campbell) as a gift from his parents while they're off for a short trip abroad. In the meantime he's being taken care of by the world's worst babysitter (Stonebreaker), who plans to burgle the entire house with her shifty boyfriend... but they've got a surprise coming. Fans of killer doll stories will get a kick out of this one, particularly given the nifty holiday twist here and the satisfying E.C. Comics vibe. In "Christmas Carnage," recovering alcoholic Chris (Murray) is up for a promotion but won't stand up for himself, much to the consternation of his wife who'd rather have office party sex with his boss who likes dirty Christmas talk. Falling off the wagon with a vengeance and wearing a Santa outfit, he decides to find his assertive side at last in the bloodiest way possible. Nicely acted and balancing laughs with splashy gore, it's a tie with "Dreidel" as the strongest entry of the film. Finally "Room to Let" concerns young Anna (Ralston), who takes a room at a seaside boarding house only to find out that there's a strange, torchlit ceremony going on nearby at night. The further she investigates in town, the darker the secret of the area's winter solstice appears to be. Straightforward and fairly grim, this one at least has some nice atmosphere and ties in well with the wraparound story for one extra little 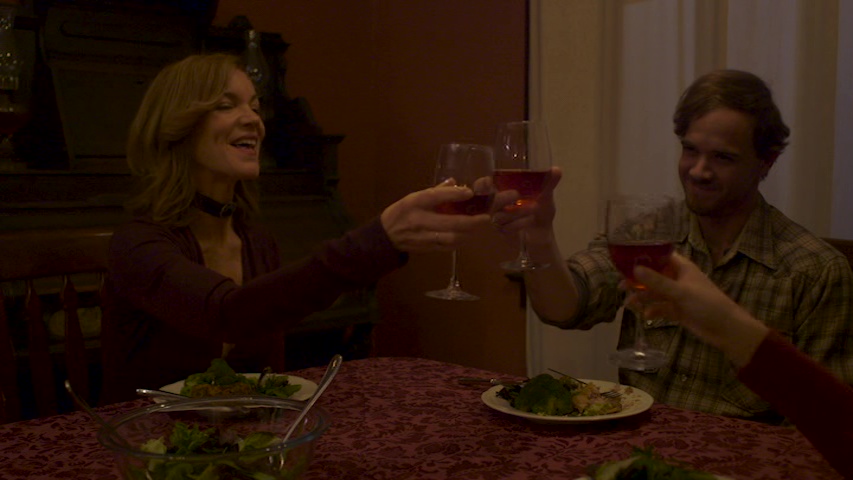 kicker at the end. 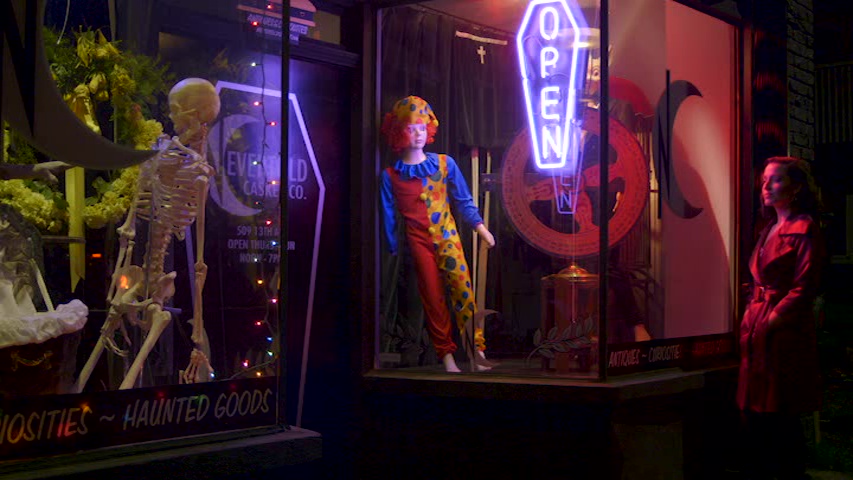 This gruesome little stocking stuffer hasn't gotten a Blu-ray release yet, but it is available on DVD from Uncork'd and is also available on major streaming platforms. The DVD looks quite solid and accurately reflects the digital lensing, which has that flat but clean aesthetic we've come to know from many recent genre productions. English 5.1 and 2.0 stereo options are offered (with optional English SDH subtitles), both sounding quite good with the feverish music score getting most of the support. In addition to the trailer, you also get an audio commentary with Ferrell, Vigil, co-producer and composer Semih Tareen has a lot of ground to cover and does it in an entertaining fashion, starting off explaining how they had to hurry to secure the main shop location and originally wrote the Amelia character as a male before going into the technical ins and outs of the low-budget shoot along with stories about the casting and writing process for each story.