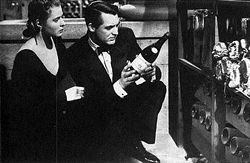 World War II, Notorious picks up in the aftermath of that "Great War" when America was struggling to put together the pieces after a devastating global conflict. A sleek and fascinating Hollywood product, the film is now immediately relevant again as a study of human emotions sometimes running irrationally along with or counter to patriotic duty; most heartening to film fans is the fact that Hitchcock's taut entertainment has lost none of its suspenseful impact or romantic allure over the decades.

After her Nazi sympathizer father is sentenced to prison for treason, troubled party girl and closet U.S. patriot Alicia Huberman (Ingrid Bergman) finds her self-destructive downward spiral in Miami halted by the presence of Devlin (Cary Grant), a CIA agent who crashes one of her bungalow parties and persuades her to do a little undercover work for her country. The two also begin a tentative affair, though her checkered past and his lack of personal initiative make for uneasy bedfellows. Things become more complicated when Alicia and Devlin learn of her assignment, to work her way into the heart of Alex Sebastian (Claude Rains), an old friend of her father who may now be brewing a plot with his cronies in South America. Another nasty situation awaits when Alex asks Alicia to marry him, a situation which would force her to live perilously within a den of serpents. 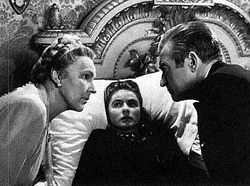 An expertly paced film, Notorious begins with a langorous first half which delicately establishes the characters and lays out the groundwork for the battle of wills over a nation's future and an insecure woman's life. Almost imperceptibly, the story then begins to weave amazing suspense sequences into its fabric, most notably the long and justifiably celebrated sequence involving a purloined key and an all too short supply of champagne. However, these scenes do not exist as style for its own sake; the three recognizably human characters remain front and center, as each heartbreaking turn of the plot tightens the screws on their precarious situation. By the end, a simple climb up and down a flight of stairs becomes a minefield of emotions, where the timing of even a few seconds or the sight of someone approaching in the background could be enough to alter an entire espionage plan. The romantic angle was hot stuff during the film's original release, when the simple sight of a man and woman interlocked and sharing kisses while they plan dinner was enough to send temperatures through the roof. Combined with a globally relevant plot which foreshadows the atomic scares of the 1950s, Notorious proved to be remarkably ahead of its time as it used then-recent news items 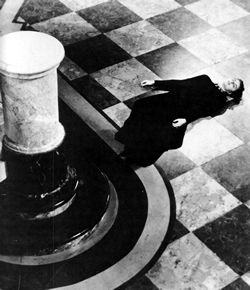 involving the end of WWII to spin out a compelling drama in which even the most superficially evil people harbor confused, all too human emotions.

Released in several different incarnations over the years, Notorious has generally fared well if not perfectly on home video. After years of VHS editions from ABC and Fox (under the banner of Key Video), the film was released on laserdisc by Criterion in both a two-disc special edition and a CAV one-discer. Despite some noticeable print damage throughout, the image had a silky, smooth quality that suited the film perfectly. Anchor Bay's no-frills DVD was somewhat cleaner but also less glossy, making for an acceptable if unremarkable presentation. The Criterion DVD is markedly different in many respects; the opening credits are now severely windowboxed (almost to the point where they appear to be shot through a camcorder viewfinder), and the film elements (presumably from the restoration project funded by Disney) look free of wear and tear. However, the increase in resolution also pumps up the amount of grain in the image, creating a grittier visual texture than the Criterion laserdisc. Which version is closer to Hitchcock's intention is anyone's guess, but laser friendly fans may want to hold on to their older platters for comparison. The mono audio is fine and free of distortion, and the DVD also marks the first availability of this title with closed captions (as optional English subtitles).

The extras from the laserdisc edition have been ported over with a few new bonuses thrown into the mix. Best of the new goodies is an isolated music track for the score by Val Lewton veteran Roy Webb, while other audio options include commentaries by classic movie host Rudy Behlmer (who offers an interesting analysis of Alicia's decidedly tame swinging lifestyle) and Hitchcock analyst Marian Keane, who also narrates a quick video description of Ingrid Bergman's unexpected and poignant gesture for Hitch at his 1976 AFI tribute. Also included are the lurid theatrical trailer ("She was a notorious woman of affairs!"), the 1948 Lux Radio Theater dramatization with Bergman and Joseph Cotten (originally included as an analog track on the laser), an extensive gallery of production and promotional photos and artwork, excerpts of shortened and deleted scenes, snippets from "The Song of the Dragon" (a short story which indirectly served as the basis for this film), newsreel clips of Hitch and Bergman, and the usual fold-out liner notes, this time by Murderous Gaze author William Rothman. In short, this is about as thorough a job for Notorious as one could imagine, and while the transfer will look a bit different to seasoned viewers, it's really a spectacular DVD treat for both Hitchcock buffs and casual fans of stylish Hollywood classics.

Possibly the worst Hitchcock film one could watch as an introduction to the Master of Suspense's style, Marnie is in many ways the final exam after an overview of his other Hollywood efforts. The last American film in which he seemed to be at the peak of his craft, Marnie left many critics and viewers cold during its inital release but steadily gained a cult following through repertory and TV screenings - and with very good reason. The circumstances behind the film's creation have become at least as famous as the film itself, and pulling the two apart can be quite tricky indeed.

Unlike most working girls, Marnie Edgar (Tippi Hedren) makes her money the old fashioned way: she steals it. Thanks to a simply name change and some handy hair coloring, she can flit from one office to another and use her looks to land a position near the company safe, where she promptly takes off with the corporate cash and leaves no traces behind. Unfortunately for Marnie, the rich, young Mark Rutland (Sean Connery) recognizes her from a past job and offers a most unusual arrangement. If she marries him, Mark will not turn her in to the police; instead, he intends to study her like an animal and discover what makes her tick. Marnie's unhappy home life stems from a dysfunctional relationship with her mother (Louise Latham), and her hatred of men drives her to seek escape by riding her beloved horse, Forio. Meanwhile Mark's sister, Lil (Diane Baker), smells a rat in her brother's marriage and 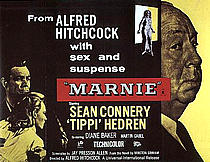 uncovers a few nasty facts about Marnie which could prove to be the less than happy couple's undoing.

While Hedren had already undergone an excessive amount of physical and psychological anguish during the shooting of Hitchcock's The Birds, nothing could prepare her for the experience of Marnie. Hitch's legendary fetish for ice cold blondes resulted in his attempting to mold her according to his wishes, with miserable consequences for nearly everyone concerned. However, this situation actually served to help the film, which constantly seems to be in the grip of a psychosexual fever dream. Marnie's aversion to the color red recalls

Gregory Peck's similar affliction in Spellbound, but here the Freudian analysis has been dropped in favor of a probing look at two deeply twisted individuals whose only hope is to heal each other. Connery, who was about to hit the big time as James Bond, manages to evoke some sympathy for Mark, even considering what transpires on their wedding night, while Hedren is effective in a nearly impossible role. Sadly, this was the last Hitchcock film to be scored by the great Bernard Herrmann; the two parted ways during Torn Curtain.

Universal's presentation of Marnie on VHS was considered an excellent transfer at the time, but the DVD easily puts it to shame. Gone are the pastel, powdery textures we've seen for so many years; instead the image is now razor sharp and full bodied, even better than the letterboxed print which circulated on Turner Classic Movies. Unlike the fake 1.85:1 framing imposed on Psycho, the widescreen presentation here is essential and reveals critical information on every side of the frame. The extras are welcome and about as extensive as possible, with an excellent documentary, The Trouble with Marnie, leading the pack. Featuring input from participants like Hedren and Joseph Stefano (who was originally approached with Marnie as a follow up to Psycho), this covers all of the important ground but skirts a few of the production's more tawdry backstage episodes. Also included is the hilarious theatrical trailer and a pleasingly large, interesting gallery of stills and poster art.

The granddaddy of all those horror films about nature running amok, The Birds is unquestionably the best. Alfred Hitchcock's gleeful manipulation of his audience has never been more precise than this carefully paced, insidiously frightening tale of Mother Nature lunging back to take a big bite out of humanity.

Pampered socialite Melanie Daniels (Tippi Hedren) decides to deliver a pair of lovebirds to the sly Mitch Brenner (Rod Taylor), a man who played a practical joke on her in a pet store. She drives along the California coast to the tranquil Bodega Bay where he spends time with his mother (Jessica Tandy) and sister, Cathy (Veronica Cartwright). When Melanie arrives, a seagull swoops by and cuts her forehead.

However, this incident is just the beginning. A farmer turns up dead at his home with his eyes plucked out, Cathy's birthday party is besieged by flocks of malevolent birds, and soon the entire town is filled with fluttering, feathery terror from the skies.

More than a simple creepy campfire yarn, The Birds operates as a skillful allegory about people's emotional imprisonment and feelings of helplessness (much like the previous Psycho). The traumas endured by Hedren on the film's set have become legendary, and most viewers will agree that her agony resulted in a performance of effective and unforgettable mounting hysteria. Hitchcock's visual color coding has never been more astute, with the red and green outfits of his female leads providing amusing counterpoint to the startling (but restrained) bursts of bloodshed on the screen. Oddly, The Birds contains no background music (apart from a song delivered by children in the film's creepiest scene), with composer Bernard Herrmann instead serving as a consultant for the film's overwhelming soundtrack.

Universal's various video editions of The Birds over the years have been a pretty miserable bunch, plagued with chalky colors and blurry image quality. Their widescreen DVD is a tremendous improvement in every respect; those grainy prerecords and laserdiscs can now go in the trash. Some of the film was deliberately filmed with either soft focus lenses (Hedren's close ups) or grainy rear projection, so these flaws will always exist; however, the transfer is sharp as a tack and completely satisfying. The disc is outfitted with a number of great extras, including promo newsreels, the hilarious theatrical trailer, Hedren's lengthy screen test (little more than a fashion show really), storyboards, and script excerpts and illustrations for a deleted Mitch/Melanie scene and the legendary unfilmed ending (which would have been a kicker). A must for horror and Hitchcock fans alike.