An effective short film dragged out kicking and screaming to feature length, Last House on Hell Street (or more appropriately, The Only House Around without a Street in Sight) incorporates the usual low budget exploitable contents like graphic gore, victimization, and a tiny cast of characters traumatized by unseen evil. However, the end result is more of an art film with gorehound dressing, and if approached as an avant garde production (or if you prefer, a really long music video without lyrics), it's more satisfying if still deeply flawed. 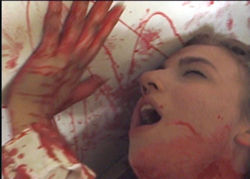 The skimpy storyline is conveyed almost entirely through narration courtesy of what appears to be a Puritan woman (co-director Robin Garrels), speaking from beyond the grave after being hacked to death by her lover (the other director, John Specht), father of her child which was "branded by Satan." The same child grows up into Kyle (the unforgettably named Schmack Virgin), who's engaged to willowy nature girl Jessica (Leah Schumacker). Their sylvan romp turns nasty when they camp out near the house where his mother was murdered, and during the night, Jessica has a nightmare in which her husband turns into... someone else. The next morning he tries to "purify her" by waving feathers in her face and, when that fails, dragging her into the basement where he ties her to a table and extinguishes cigars on her chest. Then two of their friends show up, providing more meat for the bodycount. 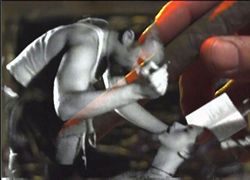 Featuring enough visual flourishes to sustain interest, Last House on Hell Street is an interesting exercise in surrealist videomaking but suffers from an ungodly amount of padding, with "atmospheric" views of tree branches consuming nearly a third of the running time. Since the actors are rarely allowed to speak and are established only through the vocally distorted narration, it's impossible to invest much or be traumatized by their plight. Instead the most enjoyment comes from the film's aesthetic accomplishments, including a creepy and skillfully executed music track, dynamically rendered opening credits (which also chomp up a lot of the running time), and a surprisingly effective (if nonsensical) climax which swerves the story into bizarre Jodorowsky territory. The woodland setting and palpable pagan atmosphere are also highly effective, while the camerwork is often evocative and makes claustrophobic use of the basement setting. As an experimental mood piece 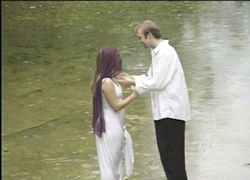 this is something of a departure from the same team's more contemporary Insaniac, another borderline horror film which ultimately focuses more on psychology and audio-visual disorientation than severed limbs and buckets of gore. All of which is commendable, of course, but next time take it easy with all the tree footage, please?

Video and audio quality are all up to the usual Sub Rosa standards; digital flaws are minimal to absent, while the surround mix keeps your ears perked up throughout. Some of the footage looks grainy and distorted, of course, but that's how it was shot in the first place. Extras are fairly minimal this time around, consisting of a behind the scenes still gallery, a batch of other Sub Rosa trailers, and two short films, Emily Haack's "Chokehold" (also on the Scrapbook DVD) and Jason Christ's creepy B&W sketch, "Vision." Worth checking out, but check any bloodthirsty cravings at the door; this is more akin to Werner Herzog running amok through the Midwest with a DV cam.